Bond market traders are trimming their expectations for global inflation following a slew of hawkish central bank meetings last week. It was made clear that the world’s monetary policy leaders are still intent on bringing down price growth, despite growing risks of an economic slowdown. This is starting to be reflected more in the front end and belly of the curve, and thus we have seen the inversion of core market yield curves reduced over the last two trading days. Nevertheless, bond markets are still pointing to a slowdown in growth going forward and warning of a possible recession.

Ghana: The Ministry of Finance, in a statement on Friday, announced that it was extending the deadline for domestic bondholders to accept the offer to swap GHS 137.3bn of debt from December 19 to December 30 with a contemplated settlement date of January 6. According to the ministry, the extension gives the government the opportunity to receive feedback from all stakeholders, including regulators, bankers, pension funds, asset managers, and insurance companies. The ministry added that the aim of the consultations is to adjust certain measures within the constraints of the Debt Sustainability Analysis.

Kenya: The Joint Financial Sector Regulators Forum (JFSRF), made up of institutions including the Central Bank of Kenya and the Capital Markets Authority, has indicated that it plans to develop rules to guide oversight of crypto activities in Kenya. According to the JFSRF, a team will be formed to advise on "the establishment of a comprehensive oversight framework on crypto-asset activities and players in Kenya." The announcement by the JFSRF adds Kenya to a growing list of countries on the continent that are pushing to oversee digital assets with a view to avoiding risks to financial stability and harm to individuals.

Kenya: President William Ruto on Friday said that the government is prepared to sell its entire stake in the loss-making Kenya Airways Plc. The comments by Ruto came a day after he met with executives from Delta Air Lines Inc. Although he declined to provide details of the talks, Ruto said that "discussions with Delta are at a preliminary stage, and the government is looking for partnerships that will make Kenya Airways a profitable entity."

Mauritius: Due to high production costs, Mauritius is set to raise prices for households with heavy power usage by 19% to 29.5% from February. According to the Energy ministry, the new tariffs will apply for households using more than 300 kWh a month, meaning that only 15% of users will fork out more for electricity. Commercial prices will increase as much as 11.49% for users of more than 400 kWh, impacting about 27% of registered traders. The ministry added that a hike is warranted as the state-owned power utility had losses of 2.5bn rupees ($56mn) in the period from July to October due to higher production costs, and leaving prices unchanged would have been unsustainable.

Zambia: President Hakainde Hichilema was on the wires saying that Zambia is trying to achieve sustainable debt levels without "rocking the boat, without damaging other variables, other key components of the economy." Hichilema further encouraged creditors to reach an agree-ment as "quickly as possible." According to Hichilema, "the emphasis is on getting this done speedily. Getting this done because this overhang is affecting many other issues, could affect many other issues.'" Zambia has been struggling to strike a deal with a diverse group of creditors ranging from holders of the country's $3bn in Eurobonds to Chinese lenders that account for about one-third of its public external liabilities of more than $17bn.

Oil: China has given the oil markets a boost as leaders of the Asian nation have pledged to boost consumption and restore economic growth in 2023. The announcement has helped crude rebound from Friday’s losses, taking the front-month Brent contract back to the $80 per barrel handle. WTI, meanwhile, has climbed back above $75 per barrel, finding additional support from US authorities moving to replenish their Strategic Petroleum Reserves. The US will start with a 3mn barrel fixed-rate purchase, but given how many barrels were released this year, more purchases will definitely come. China’s push to restore consumption and growth is definitely a supportive factor for the oil markets into 2023. If China can manage its COVID cases and keep the economy opening up, the outlook for oil for next year could be notably more bullish. This more optimistic demand outlook is reflected in futures prices, with Brent’s prompt timespread narrowing in contango. The spread is at just 2 cents per barrel at the moment and could shift into backwardation again this week.

The latest National Treasury data shows that Kenya's external debt rose to KES 4.35trn ($35.3bn) in October from KES 4.33trn in September. A breakdown of the data showed Kenya's dollar-denominated debt reached 69.3% or $24.4bn of the country's external debt. Meanwhile, the proportion of external debt denominated in the euro stood at 18.8% in the same month, 4.1% in yen, 5.3% in yuan, and 2.3% in pounds, while other currencies accounted for 0.2% of the total external debt. 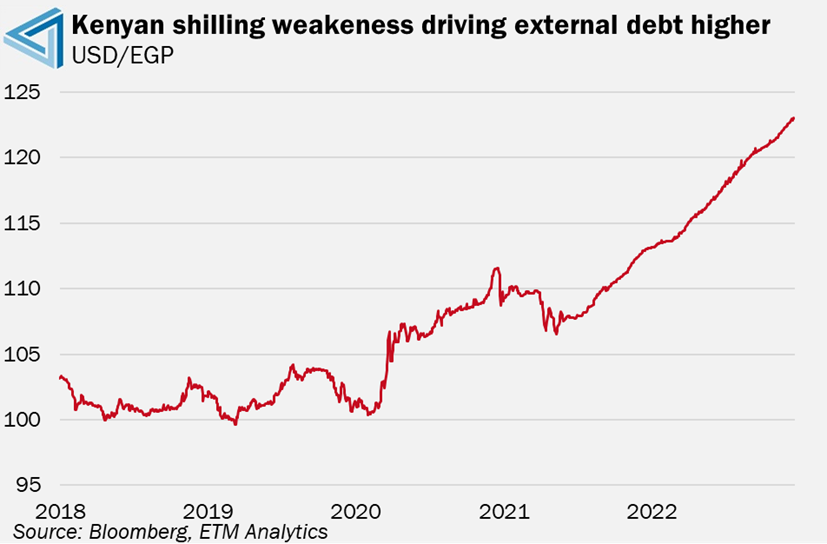 Egypt is the latest African country to secure a program with the International Monetary Fund. The IMF announced in a statement released late on Friday evening that the Executive Board approved a 46-month arrangement under the Extended Fund Facility for Egypt in an amount of $3bn. The package aims to preserve macroeconomic stability, restore buffers, and pave the way for inclusive and private-sector-led growth. 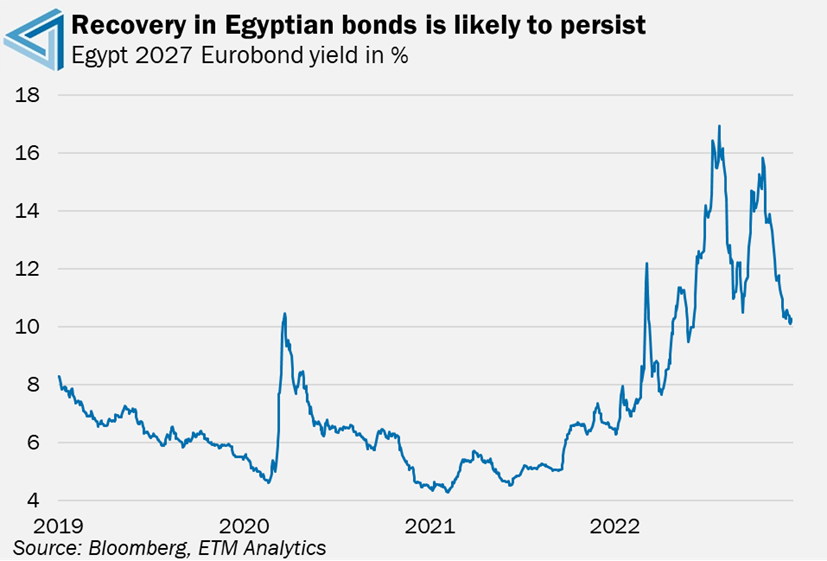 While commodities as a whole have performed exceptionally well this year, with the Bloomberg Commodity Index gaining more than 13% since the start of the year, metals have had a tough year as growth concerns and soaring inflation weigh. For context, the Precious Metals Index and Industrial Metals Index are in the red this year, with the former down -3.5% year-to-date, while the latter has lost -5.5%. 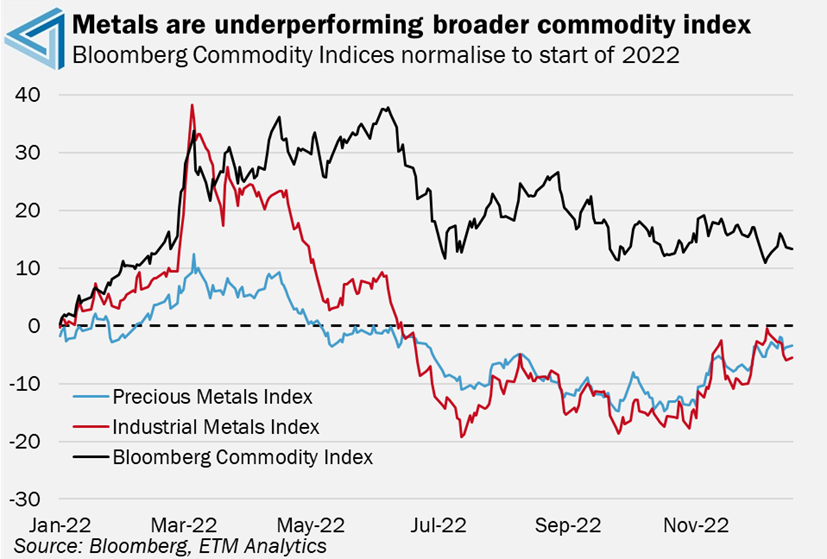