Egypt, SA and the UK are set to follow in the Fed's footsteps

In line with consensus, the Fed hiked rates by 75bp, and the USD has again surged. The catalyst was the hawkish tone that the Fed persisted with, showing few signs of sensitivity to the business cycle or the possibility of a global recession. The Fed remains firmly focused on reducing inflation and will impose serious pressure on other central banks worldwide to follow in its footsteps. The aggression of the move, not just with the Fed but globally, is unprecedented, and such a coordinated assault on inflation will eventually bare fruit. Still, it will come at a cost, which will come in the form of recessionary conditions. It could also come at the cost of financial market volatility, triggering a massive rotation away from higher beta currencies and riskier investment destinations. For now, most currencies remain firmly on the back foot against the USD.

Egypt: The Central Bank of Egypt (CBE) is set to decide on its policy rates today under the new leadership of Governor Hassan Abdalla. Expectations are that the policymakers at the CBE will vote in favour of tightening monetary policy as the bank tries to dampen resurgent inflation. While policy tightening is expected, investors will look to whether the CBE will allow for more currency flexibility and devalue the pound to avoid the further build-up of external imbalances and facilitate adjustments to shocks. The near-fixing of the pound to the USD despite headwinds such as rising global interest rates, and higher food and energy costs has intensified the downward pressure on the currency, and an adjustment may be required.

South Africa: The South African Reserve Bank is expected to hike its Repo rate by 75bp today, keeping pace with the Fed and other major central banks. Risks to South Africa’s inflation outlook remain titled to the upside at the moment, despite high base effects and easing price pressures from global commodity markets. A weaker rand keeps these risks high and unless the SARB acts to maintain an attractive rates differential with the likes of the US, the current phase of rand weakness will be exacerbated.

Ghana: Reports citing sources close to the matter indicate that an International Monetary Fund team is set to visit Ghana next week to pursue discussions over the country’s request for a loan programme. According to the source, a team is expected to begin conducting a Debt Sustainability Assessment in collaboration with the World Bank during the visit. Moreover, whatever shape the eventual agreement takes largely depends on how Ghana approaches next year’s budget. Securing an IMF program swiftly remains key to Ghana’s addressing its macroeconomic challenges.

Mozambique: According to the Deputy Director of Mozambique’s Financial Intelligence Unit, the country is at risk of more financial restrictions being imposed by being added to the global list of countries not doing enough to prevent money laundering and terrorist funding. Mozambique is yet to comply with most recommendations of the Eastern and Southern Africa Anti-Money Laundering Group and what to do to avoid being placed on the Financial Action Task Force’s “grey list’’. The official added that FATF is set to review Mozambique’s progress at a meeting in Paris in October. Mozambique joins a growing list of countries, including regional neighbours South Africa that face the threat of penalties such as restrictions on its lenders accessing the worldwide financial system.

Morocco: Consumer price inflation in Morocco surged to a fresh of 8.0% y/y in August from 7.7% y/y in the month prior. On m/m basis, the consumer price index rose by 0.3%. Food and transport costs drove the faster pace of price growth in August. Specifically, food prices rose by 14.1%, while non-food price inflation increased by 4%, mainly due to a surge in transport prices to 12.8%. With wage hikes for lower-earning households set to kick in this month, further upside risks to the inflation outlook exist. That said, subsidies to offset energy costs for consumers may help contain price pressures in the coming months.

Uganda: A report from the Uganda Coffee Development Authority showed that the country’s coffee exports fell by 28.5% y/y in August amid a drought that blighted crops in parts of the country and squeezed yields. Uganda exported 501,054 60-kg bags of coffee in August, compared with 700,990 bags shipped in the same month last year. According to the UCDA, the drought led to a shorter main harvest season in the central and eastern parts of the country, which hit yields. Given that coffee exports are a major source of foreign currency earnings in Uganda, the slump in exports is likely to reduce foreign exchange inflows and present further headwinds to the Ugandan shilling, which has recorded losses of almost 7.0% YTD  against the USD.

Forex: Nigerian naira among the worst-performing African currencies in September

On a month-to-date basis, African currencies have broadly come under pressure, with 17 out of the 23 currencies tracked by Bloomberg recording losses against the USD. The most pronounced losses have been in the South African rand, Botswana pula, and Nigerian naira. The latter has lost almost 1.5% MTD and is ranked the 4th worst-performing currency. A continued fall in foreign exchange inflows and reserves has pressured the naira, which traded at a record low of around NGN 436 per dollar earlier this month. 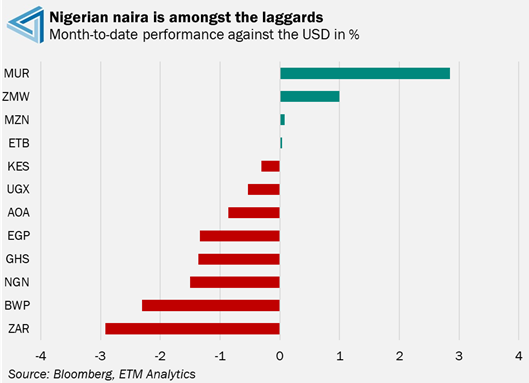 Although the naira has since stabilized, it remains near that record low and is down by more than 2.0% YTD suggesting a broader bearish bias remains entrenched as dollar shortages in Nigeria persist. Falling foreign exchange inflows and reserves, partly due to an inability to benefit from the higher than budgeted international oil price, have pressured the Central Bank of Nigeria (CBN) to ration the supply of dollars. This has exacerbated the scarcity and heightened activity in the parallel market as individuals and firms look for alternative ways to obtain foreign currency. This has seen the parallel market rate slump to record lows this year, driving the premium between it and the official rate wider.

As dollar scarcity worsens, risks continue to build for the CBN to devalue its currency again to narrow the gap between the official and the parallel market rate. Adjusting the overvalued naira close to its fair value and flexibility in the currency management system would likely be significant in attracting foreign inflows back into the market.

Fixed Income: Ghanaian Eurobonds tank as fears grow that the debt restructuring could include external debt

The bearish bias in Ghanaian Eurobonds persisted yesterday, with prices falling to record lower as investors digested news that the government had notified creditors about a planned restructuring of a portion of its $19bn of local currency debt. The strong dollar and expectations for more aggressive tightening in core markets added to the downward impetus on Ghanaian Eurobonds yesterday. 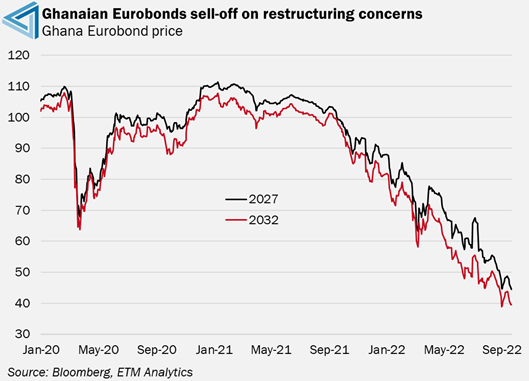 For context, Ghana’s 2027 Eurobond price fell by around 1.3% to close the session at 44.385. Yesterday’s move follows a 2.4% decline on Tuesday and brings the losses in the 2027 Eurobond to more than 60% from its peaks in early 2021. This makes Ghanaian Eurobonds one of the worst-performing Eurobond markets in the world.

While idiosyncratic factors have played a significant role in the aggressive sell-off in Ghanaian Eurobonds, much of the impetus has derived from the hawkish shift in global monetary policy. Rapidly rising global interest rates have effectively priced Ghana out of the international debt market, where the country has been refinancing itself in recent years. Moreover, given that a large portion of Ghana’s debt is denominated in US dollars, the country’s debt pile has risen exponentially on the back of the surging USD.

With the Fed and other major central banks expected to remain uber hawkish in the near to medium term against the backdrop of a looming fiscal crisis, it is unlikely that Ghana will be able to access the Eurobond market anytime soon. Ghana’s domestic bond market is saturated and, as it stands, unable to take on any significant increase in issuance, therefore leaving Ghana in a very sticky fiscal position. Ghana has little option other than restructuring its debt if it is to return to a sustainable fiscal path.

The Fed hiked by 75bp as expected at its September FOMC meeting. In the accompanying statement, the Fed noted that it anticipates that more hikes will be appropriate going forward, with the median forecast according to its dot plot projections for rates to end this year at 4.4%. The dot plots then show that rates are expected to end 2023 at 4.6% and 3.9% in 2024. The statement was little changed compared to the July meeting. Therefore, there was very little in it to suggest that a pivot is anywhere near, making it one of the more hawkish meetings we have had in recent memory. 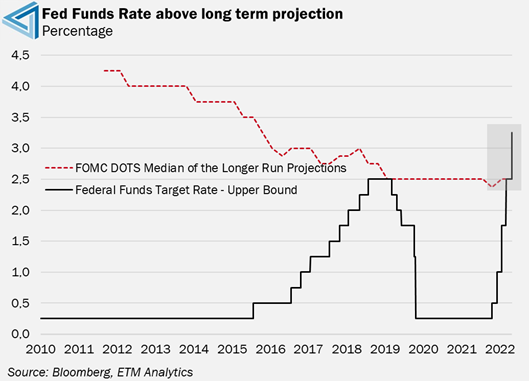 However, the initial risk-off market reaction was reversed as Powell spoke in his press conference. Powell once again affirmed that the Fed would do whatever it takes to bring inflation back under control, and that current rates are only now nearing what could be seen as restrictive. But the markets took his comments and the announcements made earlier as meaning that peak hawkishness may have been reached, and that things can only get better from here. Interestingly, there was also a mention that Fed members are split on the remaining hikes for this year, with some favouring 125bp more over the two meetings, while others favour 100bp. This further supported the shift to risk-on trading.

The Fed rate decision and Powell’s post-rate decision presser caused quite the stir in financial markets as traders digested the relatively hawkish hike. High beta assets have come under stern selling pressure this morning, with Asian equities a sea of red, while the USD has gapped higher to trade at its highest level since before the ’08 GFC. The focus today shifts to the Bank of England, which is also expected to deliver a bold rate hike. Moreover, two African central banks are scheduled to announce their respective rate decisions today. Consensus expectations are for the South African Reserve Bank to hike by 75bps and the Central Bank of Egypt to hike by 50bps.