At this stage, protests in Egypt pose a greater risk for President Abdel Fatah al-Sisi, than for the top-down investment case. But the very nature of protests makes them unpredictable and the context of significant foreign capital parked in local currency bonds, an FX rate which is no longer cheap on a real effective exchange rate basis and the near-universally positive view of foreign investors on Egypt equities, mean that protest risk is not trivial.

Protests against President Sisi have occurred in the three largest cities – Cairo, Suez and Alexandria – on 20 and 21 September. They follow highly viewed online media videos which, among other things, level accusations of corruption and profligate spending at Sisi, his son Mahmoud, and two officers connected to the Armed Forces Engineering Authority (the large project construction company falling under the Ministry of Defence). President Sisi has labelled the allegations, which have not been levelled in a court of law, as "lies".

The numbers involved in protests are, according to international mainstream media sources, in the hundreds, rather than the thousands. But this is nevertheless large in the context of the stringent legal restrictions on protest and dissent which were not in place prior to the 2011 "Arab Spring" or 2013 "Tamarod" protests, e.g. the Protest Law, NGO law, Penal Code, Terrorism Law, and Military Court Law.

Egypt equities have outperformed but are still reasonable value. The local EGX30 index is up 16% (in US$ total return terms) in the past year, compared to 0% for MSCI EM and 2% for MSCI FEM. The trailing PB of the EGX30 is on a 4% discount to the 5-year median, compared to parity for MSCI EM and a 7% discount for MSCI FEM. The EGX30 is on a forward PB of 1.8x (for 20% ROE) and forward PE of 9.8x (for 23% aggregate earnings growth).

Competing interpretations of the protests

There are four competing interpretations of these protests:

(2) UAE Foreign Minister Anwar Gargash – the protests are inspired by the Muslim Brotherhood and have failed.

(4) Foreign mainstream media – the protests reflect popular discontent with authoritarian politics, economic hardship and inequality, and a degree of contagion from protests in the likes of Algeria and Sudan in what remains an unstable region.

We draw one lesson from the history of protests in Egypt (or, for example, Algeria, Bangladesh, Indonesia, Pakistan, Thailand, Zimbabwe): the deep-state matters more than the population when it comes to the persistence of and disruption from protests.

In Egypt, when the deep-state is united then protests are seemingly dealt with swiftly and ruthlessly (e.g. in the August 2013 pro-Morsi protests in Rabaa and Nahda, in the February 2016 anti-police protests in Cairo, and in the April 2016 Tiran and Sanafir handover protests). However, when the deep-state is divided, then protest can be tolerated to the point of bringing down the incumbent government (e.g. in the anti-Mubarak "Arab Spring" protest of 2011 and the anti-Morsi "Tamarod" protest of 2013).

The challenge from the perspective of investment risk analysis is that once protests start, it is hard to predict how far they will go because of the lack of any visibility on divisions and negotiations between rival deep-state elements.

Most of the economic reform policy changes which are likely feasible under the current political system (where the Supreme Council of the Armed Forces remains the most powerful element, President Sisi remains a faithful guardian of their interests but has no independent political party of his own, and Parliament is highly fragmented) are already done. These include the devaluation of the FX rate (eliminating the very large parallel market rate which private sector companies were forced to access), an improved oil and gas royalty scheme for multinational oil companies (which prompted the disclosure of proportionately huge new discoveries), fiscal deficit cut via subsidy reduction, and pro-business legal reform (Investment, Industrial Licensing, Bankruptcy laws).

We are assuming that a full levelling of the commercial playing field for private sector companies in competition with military enterprises is unlikely, but that the changes mentioned above are material enough to have a positive structural impact on growth and that the full fruits of these changes (faster growth, higher investment) are still to come. The transition from improved security and macroeconomic adjustment (devaluation, current account deficit reduction, fiscal security cuts, taming inflation) to growth should remain on track (facilitated by lower interest rates).

Whether Egypt can shift to sustainable growth, with job creation from manufacturing exports and sticky foreign investment (ie a shift from volatile portfolio inflows to high yielding local currency debt to fixed capital investment in manufacturing) remains to the seen. Indeed, for us, the most disappointing aspect of Egypt over the past two years is the absence of much manufacturing FDI in, for example, the Suez Canal free-zone. Yet at current equity valuations, this is not, in our view, being priced in anyway. 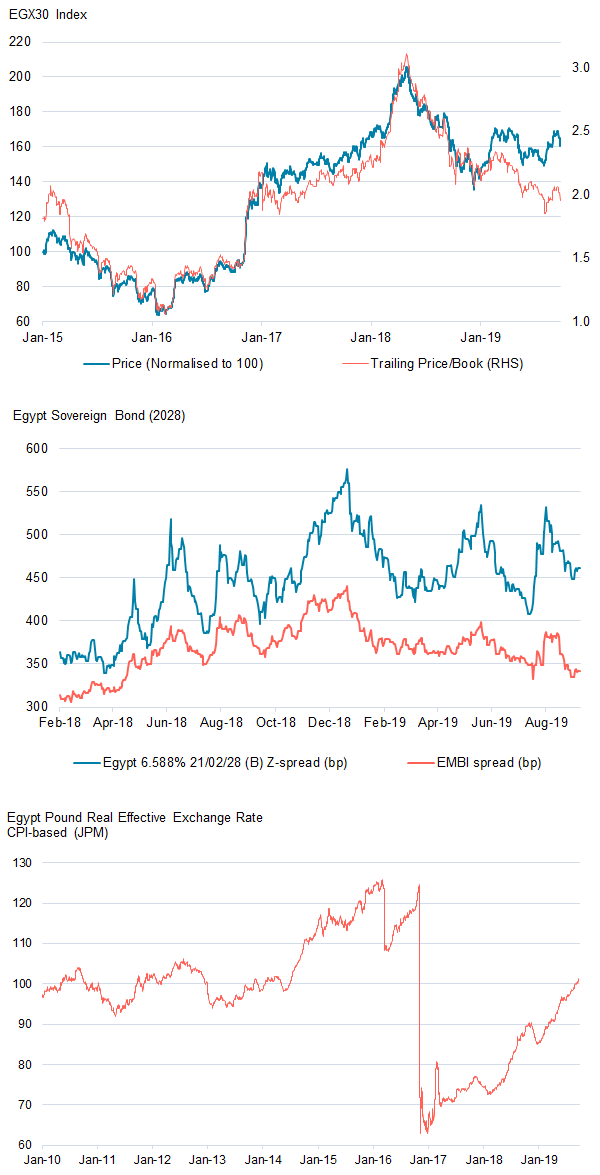