Egypt priced for distress: Too harsh but don't expect the army to drive reform

This week, Egypt marked the 70th anniversary of the revolution that overthrew King Farouk and led to the founding of the modern republic. Many of the policies of the early years – anti-colonialism, non-alignment and hostility towards Israel in foreign policy, and socialism and state planning in economic policy – have been reversed or become obsolete. Whatever the policy, the key support for implementing it has always been from the military.

The first part of this report lays out the case that the position currently enjoyed by the military in politics and the economy is perhaps its strongest since the inception of the republic.

As before, the influence of the military over economic policy (maintaining orthodoxy) and foreign policy (keeping Egypt onside with critical geopolitical allies) should be sufficient to navigate out of the current crisis.

The second part of this report reviews how recovery from a crisis has been a powerful equity market driver in the past and how this entails an opportunity at current distressed market valuations.

But, again as before, the vested commercial interests of the military are likely too entrenched to allow the structural economic reforms – specifically, the levelling of the playing field between military-affiliated enterprises and the private sector – needed to unleash long-term growth.

This third part of this report considers the longer-term trend in a number of factors: gas exports, education, twin deficits, government debt, external debt, youth unemployment, investment, manufacturing exports and water stress. The picture that emerges of the track record on structural reform is grim.

1) The strongest military since the 1952 revolution

The military is arguably enjoying its strongest domestic position since the revolution – this is not the same as arguing that Sisi is the most powerful President in the republic's history.

Putting the effective dismantling of both the National Democratic Party and the oligarchic circle of Hosni Mubarak (post-2011), as well as the Muslim Brotherhood (post-2013), to one side, consider the following legal changes, which make the current military leadership more powerful politically and economically than their predecessors. 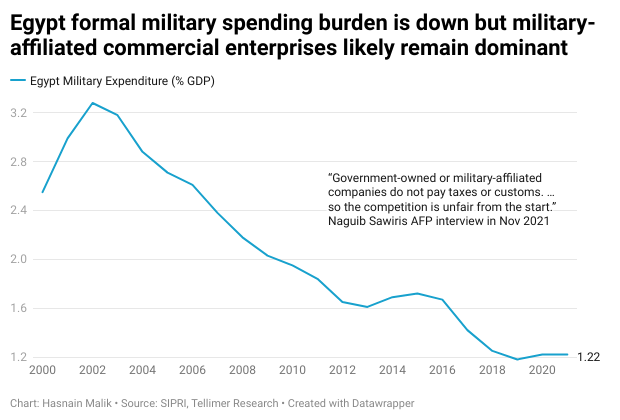 Third-party analysis is available on the Egypt military's commercial interests, from Carnegie Middle East Center (2019), and on the need for a much better environment for the private sector, from the World Bank (2020).

Back in 2017, similar to now, the IMF was talking about structural reform beyond macroeconomic stabilisation – inflation control, fiscal consolidation and FX rate flexibility. Note this comment from the IMF's 26 September 2017 review report, “To support private sector development, it will also be important to limit involvement by entities under the Ministry of Defence in commerce”.

The Egypt Fund Law and the NSPO agreement described above establish a path to privatisation but how attractive are military-affiliated companies, which have benefited from an uneven playing field, and likely remain beholden to a dominant shareholder, to minority investors, particularly those with an ESG filter, remains to be seen.

Furthermore, if much of the pledged investment from GCC sovereign wealth ends up in privatised military-affiliated companies, that will boost FDI statistics but it is unlikely to structurally reform these companies or the sectors in which they operate.

The current factors driving Egyptian equities to their cheapest valuation in at least a decade, measured by forward PE, are largely global – US rate hikes and tighter global liquidity, the global growth slowdown and reduced risk appetite, and high commodity food prices. 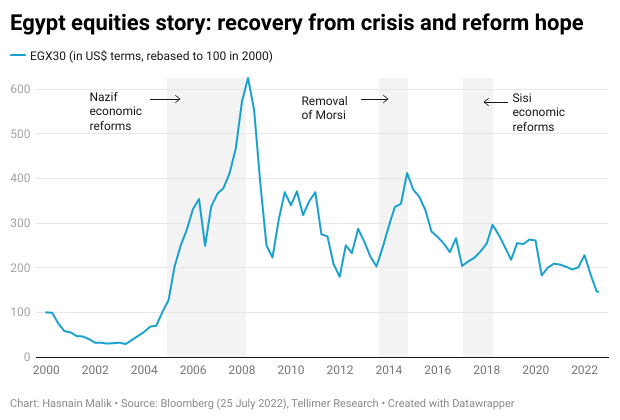 Although the margin for error is slim, Egypt should have sufficient orthodoxy in its interest rate, fiscal and FX policies, as well as sufficient support from the IMF and the GCC, to recover from the current crisis. Foreign reserves are approximately double short-term external debt. 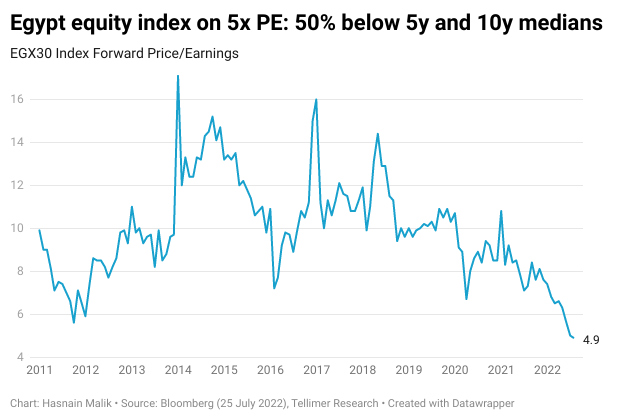 3) Not a structural reform investment thesis

For long-term investors in Egypt, beyond the recovery from crisis trade, there needs to be a credible thesis for growth. That is where structural reform comes in – changes that encourage investment, raise productivity, and create jobs, consumption power and exports, as opposed to fiscal consolidation or mega construction projects with uncertain long-term benefits.

I remember writing, in 2017, about the potential for the combination of the Industrial Licensing, Investment and Tax laws to unlock the potential of low-cost, logistically well positioned and EU tariff-friendly manufacturing exports in Egypt, particularly in the Suez Canal Zone.

There is little evidence that these reforms have paid off – the domestic and foreign private sector is not being enticed into sectors that might support the manufacturing export sector, unlike the oil & gas or real estate sectors. And the potential export benefit of the cheap currency, following the Q4 16 devaluation appears to have been wasted. 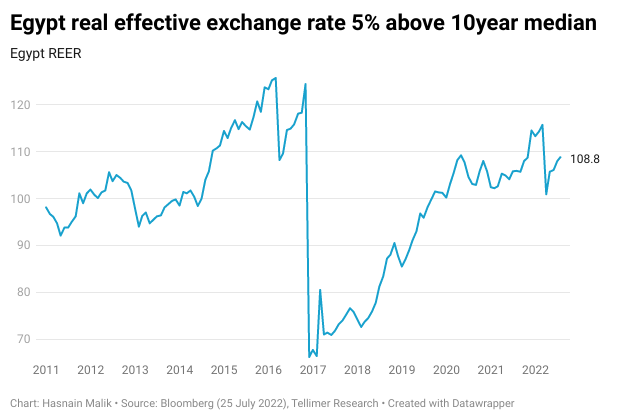 Success on gas and education

Two unequivocal positives, in terms of structural change in Egypt, are: 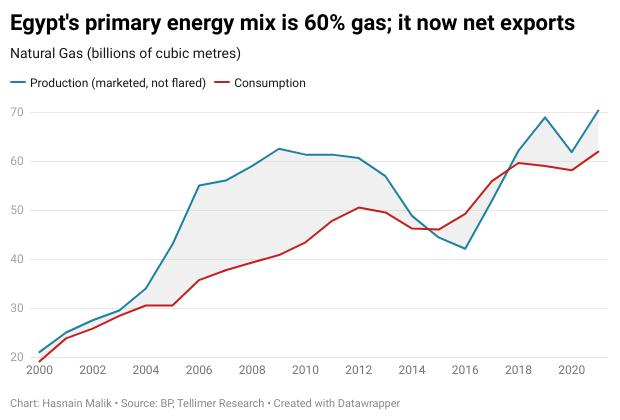 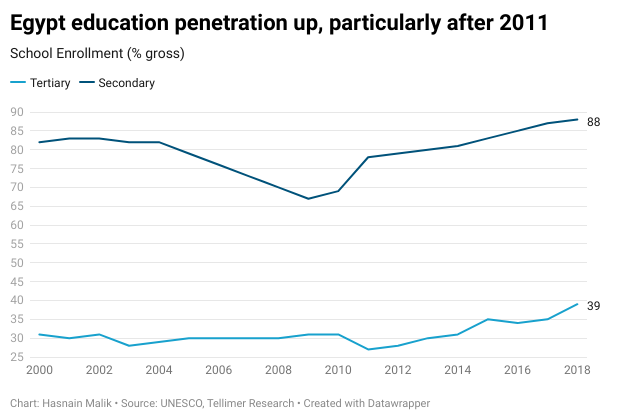 After 2016, there has been an improvement in the twin deficits, particularly on the fiscal side, and gross government debt. But Covid and the higher food prices have stalled this trend. 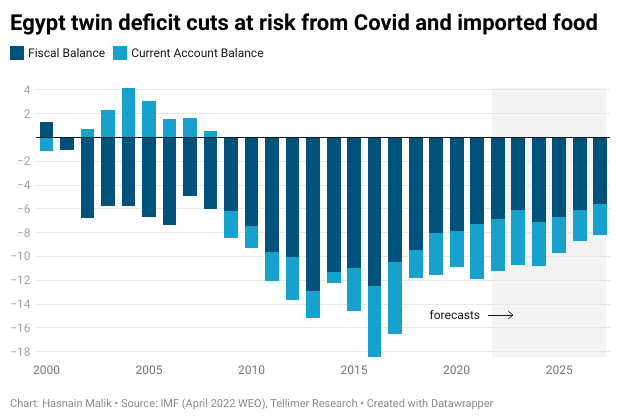 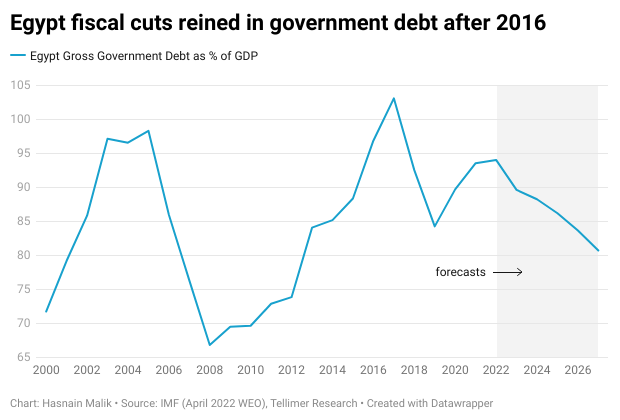 External debt has risen substantially in the Sisi era, doubling from 15% of GDP to over 30%. 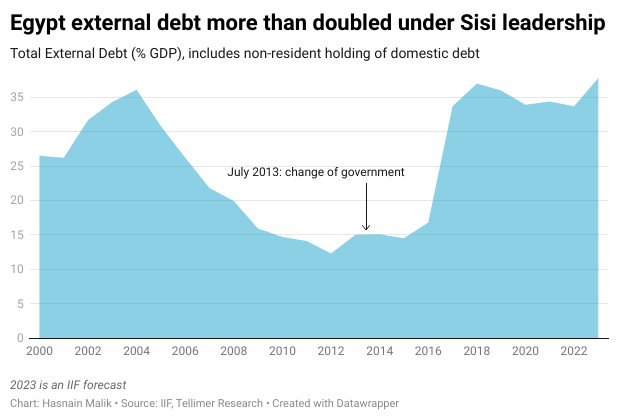 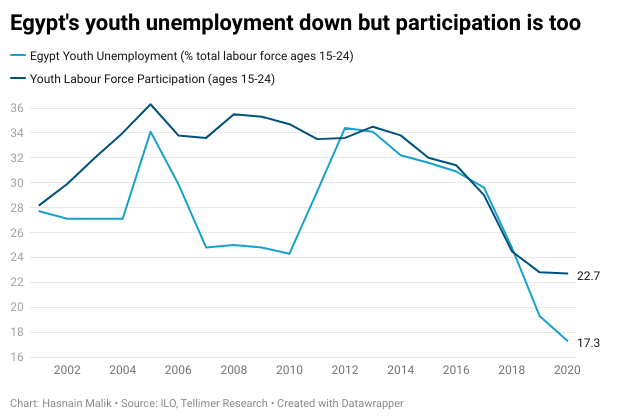 The era, under President Mubarak and Prime Minister Nazif, from 2004 to 2008, when Egypt introduced market reforms, reduced non-tariff trade barriers, reformed the tax system and deepened the financial sector, sparked a boom in capital expenditure from both local and foreign investors.

Since that burst, the capex intensity of the Egyptian economy has declined, albeit with a bounce in 2017-19, driven mainly by the oil & gas and real estate sectors. 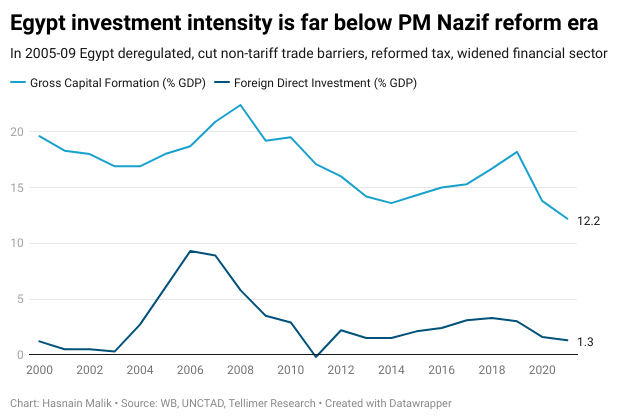 And, while net manufacturing exports (gross exports minus gross imports) have improved slightly, they remain negative. 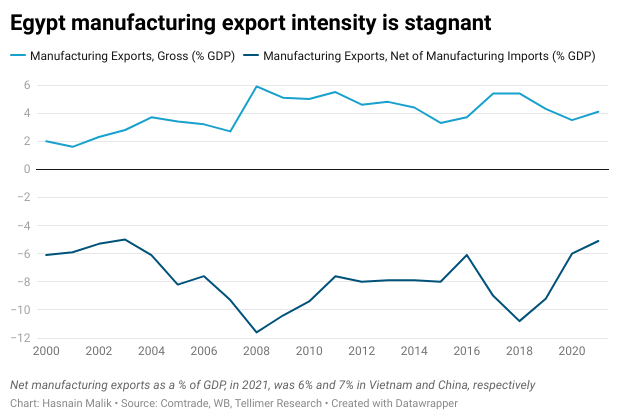 There has been no arrest in the increasing levels of water stress in Egypt. This issue is likely to worsen the more that Ethiopia fills up the Grand Ethiopian Renaissance Dam (GERD). This has already caused considerable friction between Egypt and Ethiopia but, de facto, the goal posts for negotiation are being moved as GERD fills up.

For all of Egypt's geopolitical importance, to the US, Israel and the GCC, it has not leveraged this into a decisive change in relations with Ethiopia. 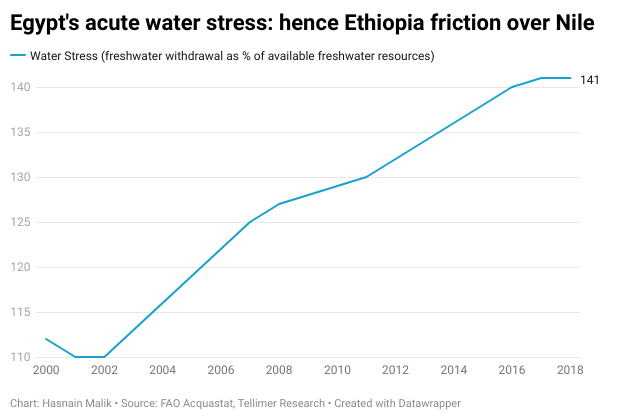 The silver lining for the Egyptian military is that nothing builds popular support more than a genuine, external national security threat, which is, long term, what the loss of control of Nile water flow amounts to.