Comments by the Fed that it may pursue more aggressive rate hikes have done very little to dent risk appetite that has continued recovering. Equity markets have bounced back further off their lows, commodity prices have remained buoyant, global growth expectations remain elevated, and commodity currencies have continued to perform.

Oil prices are rising once again after giving up their early gains yesterday, with the market still eyeing possible further sanctions on Russia. The benchmark Brent contract has climbed back above $117 per barrel as a result after nearly touching $120 yesterday before slipping back down to around $115 at the close. Further sanctions against Russian energy exports will still have a notable impact on the market, as Russian crude is still finding its way to the market through buyers in China and India.

Egypt: Reports citing people familiar with the deal suggest that an Abu Dhabi wealth fund has agreed with Egypt to invest around $2bn by purchasing state-held stakes in some companies, including the country's largest listed bank. In addition to the bank, ADQ is purchasing stakes in four other companies listed on Egypt's stock market, including Fawry for Banking & Payment Technology Services SAE. Such funding would be welcome for Egypt, where the economy is being put under increasing pressure from the shockwaves of Russia's invasion of Ukraine.

Egypt: Speaking an interview, Head of the Finance Ministry's Debt Management Unit Mohamed Hegazy said that Egypt is planning to raise the equivalent of about $500mn with its first yen bonds. According to Hegazy, the government is issuing the yen-denominated five-year debt in a private placement that will probably be completed Thursday, and it will target a yield of between 0.80% to 0.85%. Hegazy further said "we found good investor appetite. The bonds will have a competitive yield  considering the tightening market conditions that have limited access for several emerging economies." Note that the Egyptian government has never sold yen bonds and is looking to diversify funding for the economy under pressure from the war in Ukraine and soaring commodity prices.

Rwanda: Finance Minister Uzziel Ndagijimana has forecast the economy to expand by 7.2% this year, given the Ukraine war is set to raise inflation by increasing the price of cereals like wheat. This compares with 10.1% last year. According to the minister, "it's not easy to quantify now, but we can see at least the transmission mechanism on products from this crisis." While Rwanda's economy has bounced back after being hit badly by the impact of restrictions aimed at curbing the spread of COVID-19, particularly tourism and other main sectors, the developments in Ukraine are likely to slow that recovery.

Zambia: Data from ZamStats showed that copper production in Zambia fell by 4.5% in 2021 to 800,696 tonnes from 837,996 tonnes the year before. According to the Zambia Chamber of Mines, the fall in output was primarily due to operational challenges arising from a lack of recapitalisation due to an unattractive mining tax regime. Chamber CEO Sokwani Chilembo was quoted as saying, "it is only now that we are seeing mining companies recapitalising after mineral royalty was made a deductible expense." Since 2019, mining companies operating in Zambia had complained about what they called "double taxation," with mineral royalty payments not treated as a deductible expense when calculating corporate income tax.

Morocco: Bank al-Maghrib yesterday kept its policy rate at a record low of 1.5%, with policymakers citing “extremely high” uncertainty surrounding the economy. Despite inflation surging to a 13-year high, policymakers opted to limit damage to the farm and tourism reliant economy that is under pressure from a severe drought and global insecurity. Policymakers expect inflation to return to “moderate levels in 2023.” For 2022 the inflation forecast was raised to 4.7% from 2.1% earlier. Meanwhile, the country’s growth forecast for this year was cut to 0.7% from 2.9% previously, with the bank citing a projected slow recovery in tourism to pre-pandemic levels and a steep fall in farming output.

The Kenyan Shilling (KES) extended its losing streak yesterday on the back of increased demand from oil companies and general importers. Specifically, the KES weakened by 0.10% against the USD to close the session at a record low of 114.52, according to Bloomberg data going back to December 1988 and added to year-to-date losses of 1.22%. 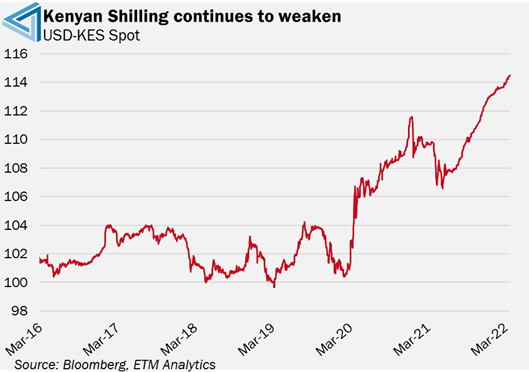 Since its 2021 low of 106.56, the KES has lost almost 8.0%. Pressure on the KES has emanated from the recent surge in global crude oil prices on the back of supply constraints and geopolitical tensions while demand for hard currency by merchandise traders has picked up as coronavirus restrictions are removed and economic activity picks up. A persisting current account deficit has further weighed on the KES. Data recently showed that Kenya’s current account deficit widened to -5.6% of GDP in the 12 months to January 2022 from -4.3% of GDP in the 12 months to January 2021.

While improving diaspora remittances evidenced by a 23.5% y/y increase to $321.5mn in February 2022, from $260.3mn recorded over the same period in 2021 and an adequate level of reserves might limit the depreciation of the KES, we see risks tilted to the upside. Elevated oil prices, rising fiscal risks tightening global financial conditions, a potential drought after a poor rainy season in Q4 2021, and the upcoming general elections are all factors that pose further downside risks to KES. Note that the KES remains overvalued by around 7% on a real effective exchange rate basis suggesting there is still room for further depreciation.

Fixed income markets across the world have taken a beating in recent weeks as central banks dial up the pace at which they are tightening monetary policy to combat soaring inflation. This is reflected by the record drawdowns in global bond indices. For context, the Bloomberg Global Aggregate Index, which we use as a benchmark for the performance of the global bond market, has shed more than 11% since its peaks in early 2021 to trade back at levels last seen at the onset of the Covid-19 pandemic in March 2020.

This marks the largest drawdown in decades, surpassing a 10.8% drawdown during the ’08 financial crisis. The sell-off in global bonds began in September last year when major central banks adopted a more hawkish tune amid concerns over persistently strong inflation. Since then, central banks across the globe have turned more aggressive, with the likes of the Fed announcing earlier this week that it is prepared to hike rates by 50bps if needed. 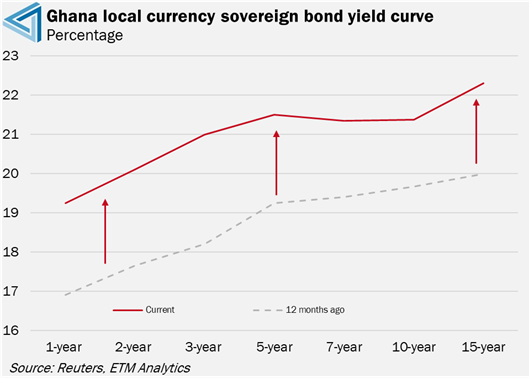 As such, Ghanaian bonds have come under significant selling pressure in recent months. Ghana’s local currency bond yield curve has shifted higher over the past 12 months, with yields on the front-end climbing from sub 17% to above 19%, while yields on the long end have risen from around 19% to more than 22%.

For now, we expect the bearish bias to persist, especially as major central banks turn more hawkish and lending conditions in the international bond market worsen. However, should we see a massive shift in fiscal policy in Ghana, there is a potential for a rebound in Ghanaian bonds. That said, this is not our base case scenario at the moment.

Inflation concerns in Africa have intensified since Russia’s invaded Ukraine on February 24, given the potential supply disruptions caused by the war. Russia and Ukraine play a significant role in the global supply of energy and agriculture commodities. The invasion of Ukraine is constraining crucial commodity supplies and is threatening to worsen with little signs of the war coming to an end in the near future.

This has hit some African countries particularly hard, especially those that are dependent on commodity supplies from the two countries at war. Food security in several African countries has deteriorated, with Ukraine and Russia being major exporters of wheat, fertiliser and cooking oils to the continent. Arguably the most exposed country is Egypt, which up until now has been sourcing most of its wheat from Ukraine.

Egypt is the world’s biggest wheat importer, bringing in about 60% of its grain from overseas. Russia and Ukraine accounted for 80% of the country’s imports last year. Costlier wheat and the risk of supply shortages had threatened to drive up politically sensitive bread prices in Egypt. However, the government on Monday announced that it had fixed the price of unsubsidised bread to prevent any political backlash or social unrest. 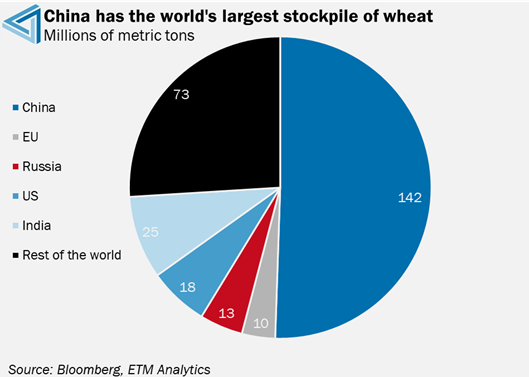 While Egypt’s government says it has sufficient stockpiles to see it through to the end of the year, it could become a significant issue if the war in Ukraine disrupts supply from the region. Should this be the case, major wheat importers will have to look elsewhere for supplies. China could be the first port of call for countries like Egypt, with Beijing sitting on the world's largest stockpile of wheat by a long shot. China has been building up an immense pile of grains in recent years. Therefore, should the war drag on and grain supplies become an issue, China has the ability to plug some of the needs of the world’s largest importers of grains. China could use this opportunity to build strategic ties by helping out nations in need.

Ukraine’s Agriculture Minister Roman Leshchenko said on Tuesday that the country’s spring crop sowing area may more than halve this year from 2021 levels to some 7mn hectares, compared to 15mn hectares expected before the Russian invasion. This suggests that there could be a material shortage of wheat supply out of Ukraine. That said, the situation remains fluid for now.