This report has been corrected to refer to the correct exchange rate of 22.84/US$ at the time it was published. The previous version erroneously cited a 24.84/US$ exchange rate.

Today has been a watershed day in Egypt, with the Central Bank of Egypt (CBE) hiking its policy rate by 200bps and devaluing the EGP by 13.75% and the IMF announcing a staff-level agreement on a 46-month Extended Fund Facility (EFF) worth US$3bn. Egypt has also requested another US$1bn of financing under the newly created Resilience and Sustainability Facility (RSF), with discussions to take place in the coming months.

While many analysts had expected more financing, with some citing expectations for a programme of US$5bn or more, Egypt’s borrowing from the IMF already exceeded 700% of quota before the new agreement so the new funding falls in line with our expectations for a more modest package. Further, new financing of up to US$4bn is equivalent to 150% of Egypt’s IMF quota, which is in line with the cumulative access cap under the new RSF facility.

The EFF will also catalyse an additional US$5bn of multilateral and bilateral funding in FY 22/23, according to IMF projections. Alongside the US$22bn of support expected from the GCC and the government’s US$10bn FDI target (between which there is some overlap), this will help meet Egypt’s large gross external financing requirements (GEFR). We estimate GEFR at US$43bn in FY 22/23 if the current account is unchanged (based on US$26.5bn of external principal payments and a 12m trailing current account deficit of US$16.5bn), which is equivalent to >10% of GDP and 1.35x gross reserves.

Further, the accompanying currency devaluation and rate hike should help reduce Egypt’s GEFR by dampening import demand and attracting investment. We have long said that a deval and rate hike were necessary to reduce external imbalances and secure an IMF programme, with the IMF saying that the "move to a flexible exchange rate regime is a significant and welcome step to unwind external imbalances" and that "the commitment to durable exchange rate flexibility going forward will be a cornerstone policy for rebuilding and safeguarding Egypt's external resilience over the long term."

Today's 13.75% currency devaluation brings YTD depreciation to 31.25%, and is in line with our estimate that the EGP was 10-15% overvalued. Indeed, using the IMF's estimated "current account norm” of -2.9% of GDP from the last External Sector Assessment in July 2021 and applying their estimated current account-REER semi-elasticity of 0.13 implies a 13% overvaluation based on the 4.6% of GDP current account recorded in the 12 months through June, almost exactly in line with today's move (see here for a more thorough explanation of the methodology). 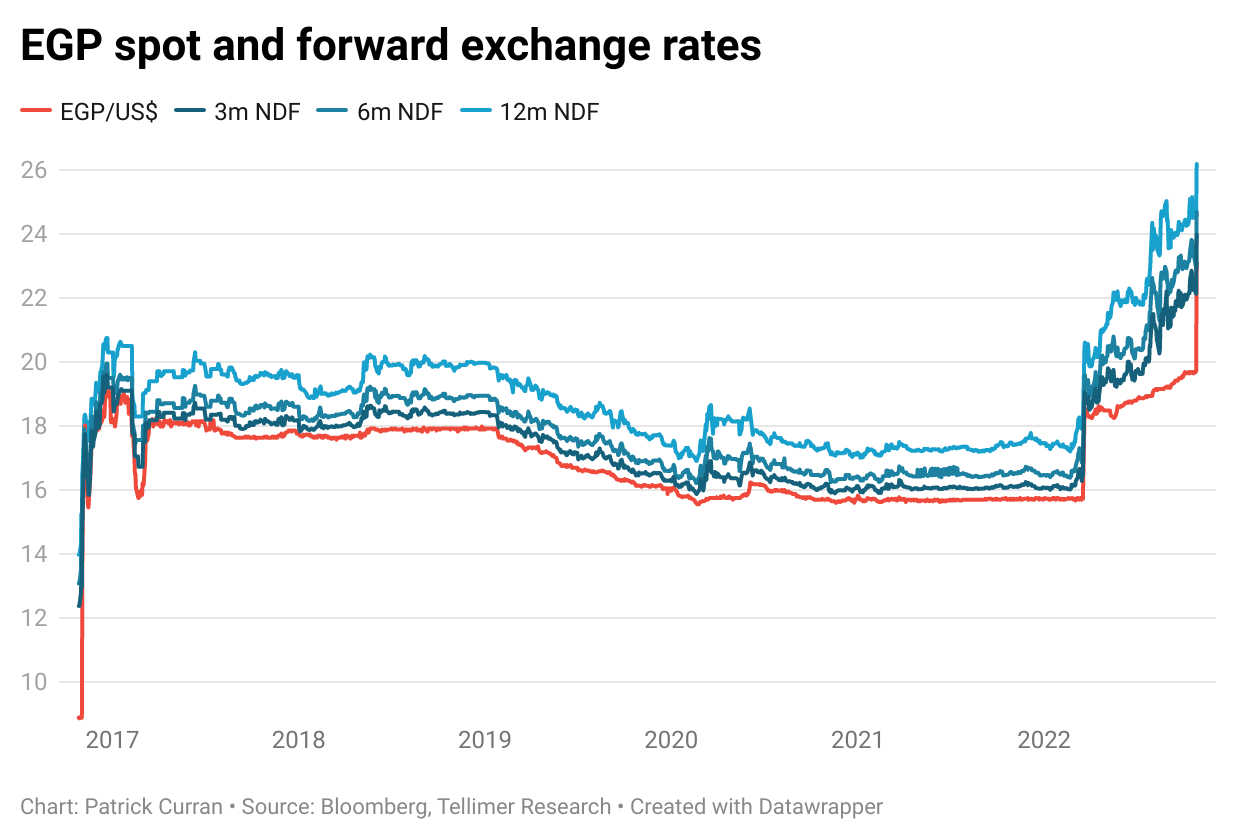 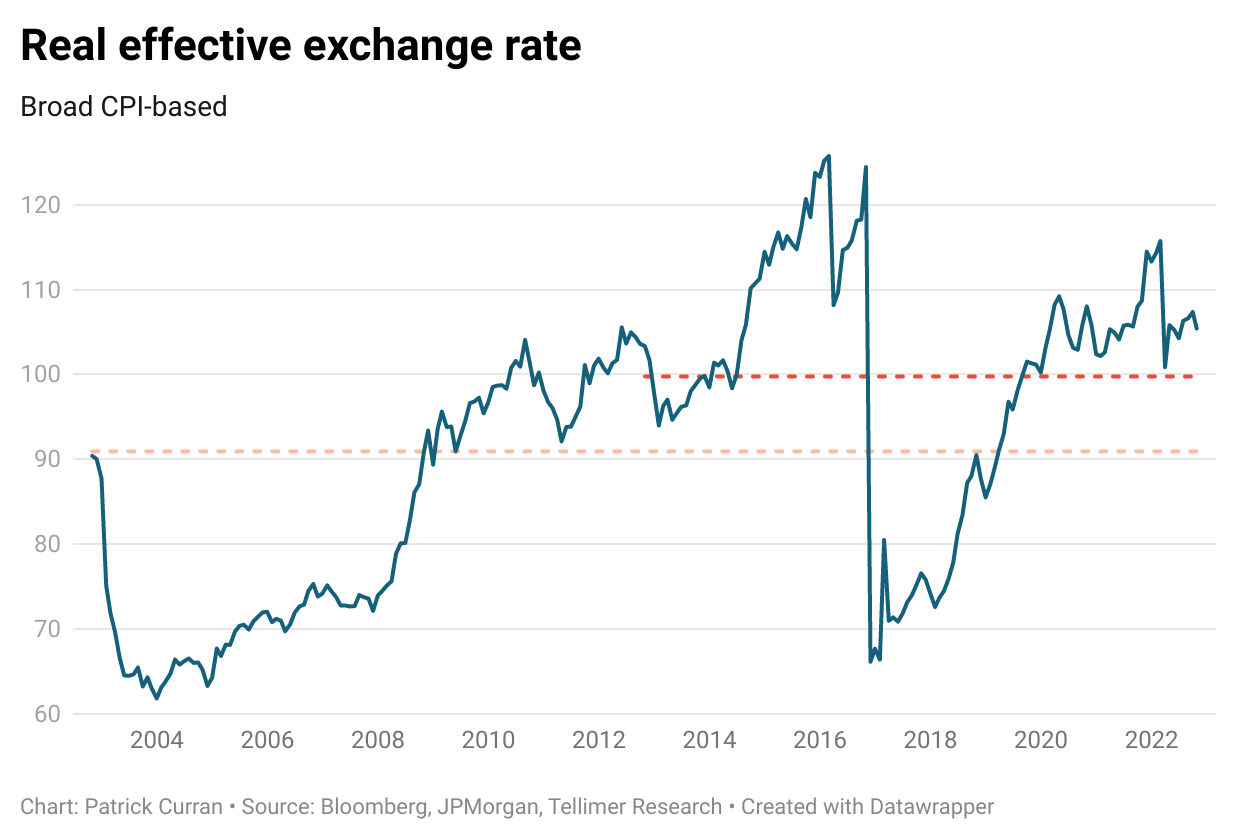 Even if today's deval was sufficient to clear the market, it is essential that Egypt follows through on its promise for currency flexibility moving forward rather than re-pegging or managing the currency and allowing imbalances to build back up as it did after the 2016 and March 2022 devals. On this front the initial rhetoric is quite positive, with the MPC statement saying that the CBE has "moved to a durably flexible exchange rate regime, leaving the forces of supply and demand to determine the value of the EGP against other foreign currencies."

The CBE also said it would completely phase out the requirement that importers obtain letters of credit by December, a policy that had been causing importing shortages, and reiterated recent statements that it would work towards building a derivatives market to further deepen the FX market and enhance liquidity. Together, these policies will further deepen and normalise Egypt's FX market, provided the EGP is allowed to trade flexibly moving forward.

Importantly, the CBE also hiked its lending rate by 200bps to 14.25%, taking its real policy rate to -0.85%. While this is c1.5pp above the -2.4% median across our sample of 66 emerging markets, more rate hikes will likely be required moving forward given broad-based inflationary pressure (with core inflation running at 18% yoy in September versus headline inflation of 15.1% yoy), tightening global monetary policy (including at the Fed, where another 175bps of hikes are anticipated by March 2023), and the likely passthrough of the deval to inflation.

It also remains to be seen if the new funding and policy measures will be sufficient to plug Egypt's external funding gap. Further, we must still await Board approval of the EFF, which is expected to discuss the request in December, and it is unclear if there will be any additional prior actions to reach that point (although today’s measures likely clear the key hurdles). After initially jumping by 3.4pts in early trading, Egypt’s 2032 eurobonds were actually flat on the day at the time of writing, indicating lingering doubts that the EFF will be enough to prevent a balance of payments (BOP) crisis.

Even if the deval, rate hike, and new funding are enough to stave off a BOP crisis, Egypt's longer-term creditworthiness will depend on its ability to implement difficult structural reforms to shift to a more private sector-driven growth model that does not rely on boom-and-bust financing cycles. This will be the key goal of the EFF, which "aims to unlock Egypt's enormous growth potential through broadening and deepening structural and governance reforms [and]…policies to unleash private sector growth including by reducing the state footprint."

This will be much more difficult to deliver than today's macro reforms, and the likely delays in implementing structural reforms could continue to weigh on the credit. That said, if the EFF is approved by the Board and Egypt demonstrates a continued commitment to currency flexibility, we think that Egypt has bought some time to deliver on more deep-rooted reforms and that the risk of a BOP crisis has been greatly reduced, at least for now.

Against this backdrop, we continue to think there is upside for Egyptian eurobonds. While the EGYPT 7 ⅝ 05/29/2032s have rebounded by 6pts from last Friday's low of US$58.2, at US$64.2 (14.7% YTM) at the time of writing on Bloomberg, we think they offer attractive value and retain our Buy recommendation.

Meanwhile, with 12-month T-bill yields ticking up to 18% from 14% in early July and the bulk of the pent-up currency depreciation now likely in the rearview, we upgrade our recommendation on 12m T-bills from Sell to Buy hedged with 12m NDFs.

Equities are cheap but some pain to digest first

The central bank’s policy rate hike and comment on a move to a ‘durably flexible’ currency regime likely portend an imminent IMF deal.

An IMF deal is certainly needed with Egypt having burnt through about 40% of its pre-pandemic FX reserves, import cover down to 3.5 months, and short-term external debt equating to over half of those remaining reserves. For foreign investors in equities, the deal is, overall, a positive catalyst but there will be some pain to digest first in terms of devaluation and slower growth.

Even after today's 13% devaluation, a further 14% devaluation is implied by 12-month non-deliverable forwards. However, that may be too harsh given an IMF deal should trigger the rebuild of FX reserves and the real effective exchange rate, which is one guide to fair value, was within a few percentage points of its 10-year average prior to today's devaluation.

Slower growth versus prior consensus forecasts is likely as a result of policy rate hikes and fiscal deficit reduction. Even after the 200bps rate hike, the real interest rate is negative 0.85%, suggesting there is more needed. And with fiscal deficit forecast, according to the IMF, of around 7% of GDP over 2022 and 2023, substantial cuts to government spend are likely.

Shoring up of the sovereign balance sheet but at a cost to macroeconomic growth makes for a much more compelling case in Egypt's eurobonds rather than its equities, excluding any exporters.

Equities look cheap, with price/earnings on a 45% discount to the 5-year average. But that discount is not quite as mouth-watering as it looks given the downside risk to consensus earnings forecasts – currently 9% growth in 2023, according to Bloomberg – let alone further currency erosion.

As we have argued before, the core long-term factor, the one that is necessary for Egypt to escape its boom-bust cycles, is whether the competitive playing field is levelled between the private sector and state-military owned enterprises. It remains to be seen whether any IMF deal is able to catalyse that change – see Egypt priced for distress: Too harsh but don't expect the army to drive reform (July 2022).

Egypt: Priced for distress: Too harsh but don’t expect the army to drive reform, July 2022 (Malik)