US Treasury yields are ticking higher this morning, keeping yesterday’s topside momentum following some positive revisions to the Q3 GDP numbers for the US. The economy grew by 3.2% q/q between July and September, higher than the initial estimate of 2.9%. The front end of the curve was put under more pressure as a result, which flattened the curve and ended the trend of dis-inversion seen in recent sessions as inflation expectations bounced from last week’s multi-month lows. Meanwhile, swaps were paid across the board, indicative of higher rates expectations. The market is now fully pricing in 50bp worth of hikes between the February and March FOMC meetings and a terminal rate of just under 5.00%.

Egypt: In its latest Egypt Economic Monitor report, the World Bank forecasted economic growth in Egypt to slow to 4.5% in FY 2022/23 from 6.6% in FY 2021/22. Thereafter growth is expected to edge higher as Egypt maintains macroeconomic stabilization and structural reforms. Meanwhile, inflation is expected to exceed the central bank's target range and remain in double digits for FY 2022/2023, impacted by the depreciation of the Egyptian pound, supply bottlenecks, and the potential changes in fuel prices. According to the World Bank, higher interest rates, accompanied by the government social mitigation package, are likely to cause a slowdown in fiscal consolidation through FY 2022/23, with the fiscal space projected to remain constrained by the need to service debts.

Kenya: To replenish its dollar reserves and support its budget, Kenya is set to arrange syndicated loans worth KES 110.7bn ($900mn). According to the International Monetary Fund, government officials are "well advanced" in tapping medium-term loan facilities from international banks. The full amount is expected to be disbursed by early next year. Meanwhile, local reports suggest that Treasury told the IMF in a letter of intent that they took this route after the planned issuance of $1.1bn of external commercial financing for the financial year 2021/22 did not occur amid unfavourable market conditions.

Morocco: Headline inflation in Morocco accelerated to 8.3% y/y in November from 8.1% y/y in October. On a m/m basis, prices climbed 0.4% in November. As is the case for most countries around the world, Morocco's inflation is driven by food and transport costs. Food inflation is underpinned by the effects of the drought in the country's growing areas and Russia's invasion of Ukraine, which has pushed up the cost of imported goods and energy prices. While the central bank hiked its policy rate for the second time since 2008 on Tuesday, the acceleration in inflation to the highest level on record and expectations that price pressures look set to persist much longer than expected could see policymakers remain hawkish in the near term.

Nigeria: To address food security following devastating floods across the country, President Buhari has asked lawmakers to approve a supplementary budget of NGN 819.5bn ($1.8bn) for this year. According to the president, the funds will be borrowed from domestic sources to enable the government to complete ongoing critical federal government projects, such as dams and irrigation facilities. Part of the money will be used to rehabilitate damaged roads and water infrastructure.

Nigeria: In a move that could place further pressure on public finances, the Nigerian government is seeking lawmakers' approval to restructure debt owed to the central bank and take on an additional loan, which would raise the amount owed to NGN 23.7trn ($52bn). According to the Senate president, the government asked that senators allow for the restructuring of so-called ways and means borrowing from the Central Bank of Nigeria (CBN), converting it to 40-year bonds at 9% interest. President Buhari also asked for a three-year moratorium on interest payments on the existing debt and sought another NGN 1trn from the CBN on the same terms.

Nigeria: To help fund next year’s budget, Nigerian authorities plan to sell five-electricity generation companies in the first quarter. The country’s privatization agency is looking to open bids for the assets this month and reach financial close by the end of March. The power assets scheduled for sale include a 434-megawatt plant in Geregu, in the central Kogi State, a 562-megawatt facility in Calabar, Cross River State, and a 676-megawatt plant in Olorunsogo, southwest Nigeria. Authorities in Nigeria also hope that increased private-sector participation will help end power shortages in the country.

Selling pressure on the Zambian kwacha showed no signs of easing yesterday, with the currency extending its losing streak. Yesterday’s drop added to the kwacha’s month-to-date losses of more than 4.0%. This has resulted in the ZMW ranking as the worst-performing African currency tracked by ETM. Pulling back the lens, it is worth noting that since the multi-month low reached at the start of September when Zambia secured a long-waited approval for a $1.3bn IMF support package, the USD-ZMW has risen by more than 16%. 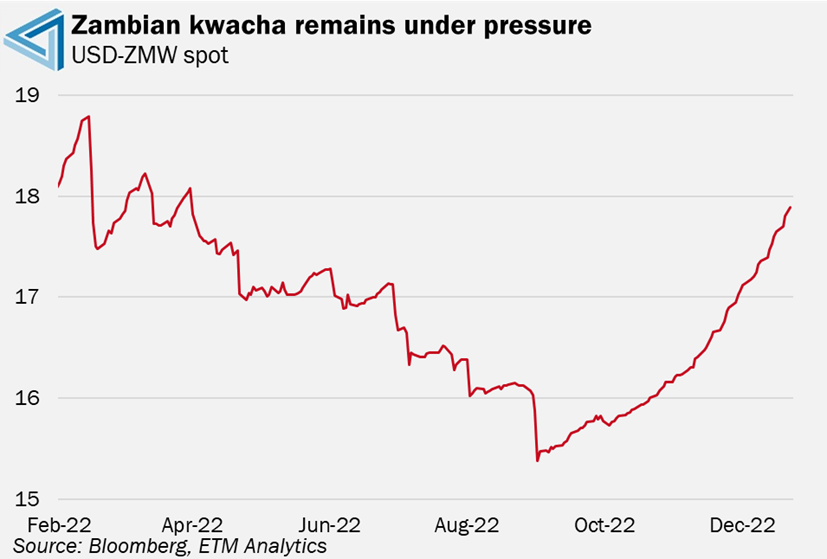 The big news in the African rates market yesterday was that the Central Bank of Egypt hiked its benchmark interest rate as pressure on the currency builds. The Monetary Policy Committee voted in favour of raising the deposit rate and the lending rate by 300bps to 16.25% and 17.25%, respectively. The move was significantly larger than expected by economists, that had forecasted a smaller 150bps hike. The bold rate hike comes as the currency faces more pressure with the derivatives market pricing in a significant devaluation in the pound in the months ahead. 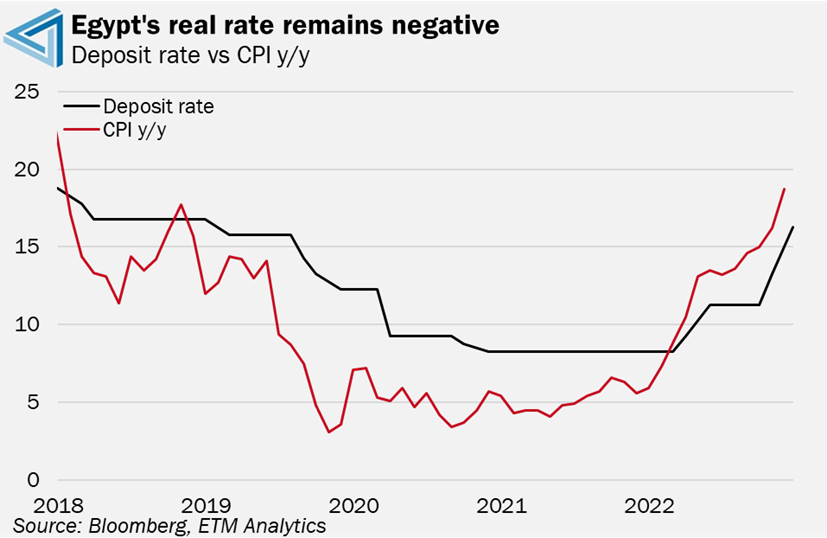 2022 has been a remarkable year for the USD. The Trade-weighted USD Index rose to its highest since 2002 on the back of the Russia-Ukraine war, Europe’s energy crisis, China’s aggressive Covid-Zero policy, and, perhaps most notably, the US Federal Reserve’s determined rate-hike cycle. 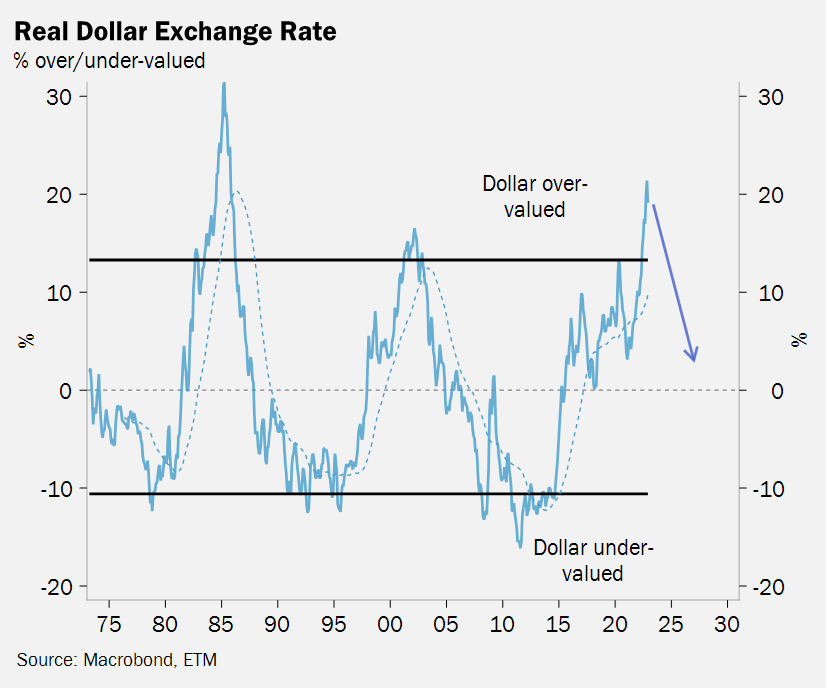