The CA deficit jumped to USD 18.4bn in Jul-Jun 2020/21 from USD 11.2bn deficit in FY 2019/20, according to preliminary data released by the CBE. Thus, the CA deficit surged 65% on the year mainly due to a sharp decline in tourism revenues (causing sharp moderation in the overall service surplus), and increases in the non-oil trade deficit and the interest income deficit. On the other hand, remittance inflows rose robustly, the deficit in the oil trade balance narrowed on the back of low oil prices, subdued demand for fuel and rising gas exports. The increase in the income deficit came on the back of rising payments on portfolio investments as well as on earnings of FDIs in Egypt, as oil companies operating in the country benefitted from rising oil prices during Q2 2021. On the other hand, interest payments on foreign debt fell on the year due to lower interest payments on deposits abroad. 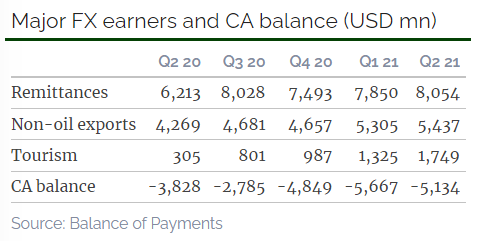 Within the trade balance, oil exports inched up 1% y/y as global demand for gas and oil prices improved in Q2. Egypt had achieved self-sufficiency in natural gas and was on track to boost gas exports in 2020 before the slump in oil prices. Meanwhile, oil imports dropped by 3% y/y and the deficit in the overall oil trade balance narrowed to marginal USD 7mn from USD 420mn in FY 2019/20. Conversely, the non-oil trade deficit expanded 17% y/y to USD 42.1bn as imports rose 13% y/y, on the back of raw materials and investment goods. More specifically, imports were driven by medicines, sterilization equipment for COVID, cereals, spare parts for cars, and railway locomotives. While private consumption and investments weakened during the COVID-19 pandemic, the imports of medicines and strong public investment drive has lifted the import bill. Non-oil exports rose 9% y/y supported by gold, fresh fruits, and electronics. Egypt has overcome South Africa to become the top supplier of oranges to Europe. 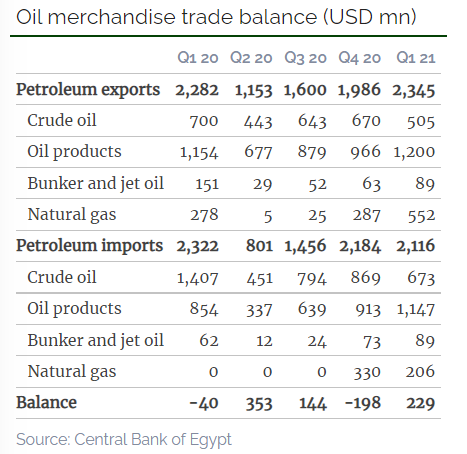 The services surplus plunged 43% y/y to USD 5.2bn, reflecting the slump in net travel (tourism), down to USD 4.9bn from USD 9.9bn one year ago. Suez Canal revenues inched up 2% y/y as global maritime trade recovered. Egypt's economy is vulnerable to external shocks due to its reliance on the tourism sector, remittance inflows and Suez Canal receipts. Before the outbreak, Egypt's tourism industry was flourishing becoming the third largest FX earner in FY 2019 after private remittances and non-oil exports. Tourism is also a major provider of jobs and generates directly about 5% of GDP, but the sector was brought to a halt during 2020. Egypt is optimistic about welcoming more visitors this year with numbers increasing steadily since January to around 500,000 tourists a month, and the government projects USD 6-9bn tourism revenue in 2021.

The surplus in the transfers account rose 12% y/y to USD 30.9bn in the period. This is entirely due to worker's remittance flows, which account for the bulk of private transfers. Previous BoP issues had revealed private remittances mostly come from Kuwait, Saudi Arabia and the UAE, and remittance inflows have rebounded soon after the pandemic began. As noted, the deficit in the income balance widened by 9% y/y to USD 12.4bn due to the rising profits of international oil companies operating in Egypt and lower income inflows.

The capital and financial account recorded a net inflow of USD 23.4bn compared to USD 5.4bn net inflow a year earlier, and CBE's foreign assets rose by USD 1.9bn during FY 2020/21. The volatile portfolio flows recorded strong USD 18.7bn inflow against USD 7.7bn outflow in FY 2019/20, driven by T-bills and bonds. We remind foreign investors left the debt market in March/April 2020, which resulted in USD 15-17bn outflow. However, as the uncertainty around the COVID-19 crisis subsided, portfolio investors start looking for high returns amidst ample global liquidity. Portfolio flows into Egyptian T-bills have surged since mid-2020, reflecting one of the world's highest real interest rates, healthy FX reserves and resilient economy. Overall, the influx of portfolio investments since June 2020 - net inflow of USD 16bn - has been instrumental in stabilizing the FX reserves as traditional sources of FX, such as tourism, took a hit from the pandemic. However, these flows could quickly reverse in response to shocks affecting investor confidence, putting pressure on Egypt's FX liquidity, interest rates and the FX rate. 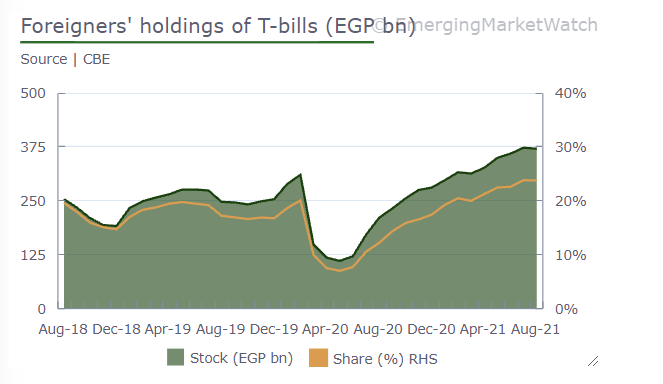 Looking at FDIs, inflows fell to USD 5.2bn from USD 7.5bn a year ago, reflecting the global uncertainty. The y/y drop in FDIs was driven by sharp slowdown in oil investments (which turned to net outflow), as well as lower non-oil FDIs. It should be noted that the CBE lumps together net FDI flows into the non-oil economy and the retained earnings and credit balances into one single category, net non-oil FDIs. This might be slightly misleading because the retained earnings and credit balances surplus was sizable net inflow of USD 4.4bn, while total investments in the non-oil sector were USD 6.4bn during FY 2020/21. Other investment flows (net) recorded USD 700mn inflow, as the net disbursement of medium- and long-term loans and facilities worth USD 6.5bn (mostly IMF loans) offset debt repayments and acquisition of foreign assets - the banks acquired foreign assets worth USD 5.0bn during the period. The banks' foreign liabilities have been rising as well, as the banks turned to external financing sources during the COVID crisis. While the banks' higher reliance on external borrowings to boost their foreign liquidity poses some refinancing risks, about 70% of banks' external debt is long-term. 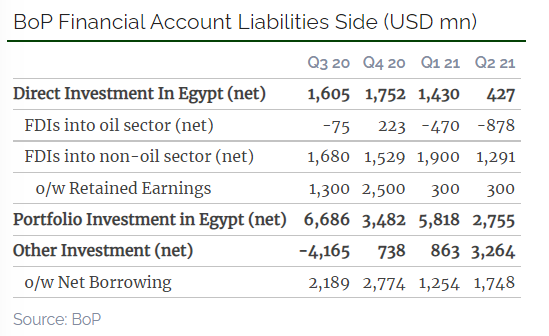 Overall, the pressure on the external account has moderated markedly when compared to March and April 2020. However, this means Egypt will be more vulnerable to investor sentiments until traditional FX inflows such as tourism and Suez Canal recover. Further, rating agency S&P warned in May that Egypt is among the most vulnerable emerging markets to higher sovereign debt refinancing rates. The agency said that part of the problem is the fact that Egypt has a "relatively sizable" portion of its sovereign debt in FX, which complicates its ability to control financing costs.