Egypt has been one of the countries most impacted by the consequences of Russia's war with Ukraine. As a major importer of wheat from and tourism destination for both countries, Egypt's balance of payments (BOP) has taken a big hit. Meanwhile, with large external financing needs and non-resident holdings in Egypt's domestic government debt market, rising global risk aversion increases the risk of capital outflows and funding constraints that could weigh on Egypt's reserve buffers (more on these risk factors below).

This initially caused Egypt's hard currency debt to be one of the worst EM performers in the wake of Russia's invasion, with its EMBI spread widening by 315bps from 18 February to a peak of 1040bps on 7 March versus a 95bps rise for the EMBI Global (or c35bps excluding Russia). It has since rallied sharply, with its EMBI spread falling back to 739bps on 21 March after rallying 27bps on the back of a rate hike and currency devaluation (more on these below). Its EMBI spread has now risen of 58bps ytd versus +63bps for the EMBI Global (or a 7.3% decline in total return terms versus -9.5% for the EMBI Global, or -7.8% when excluding Russia). 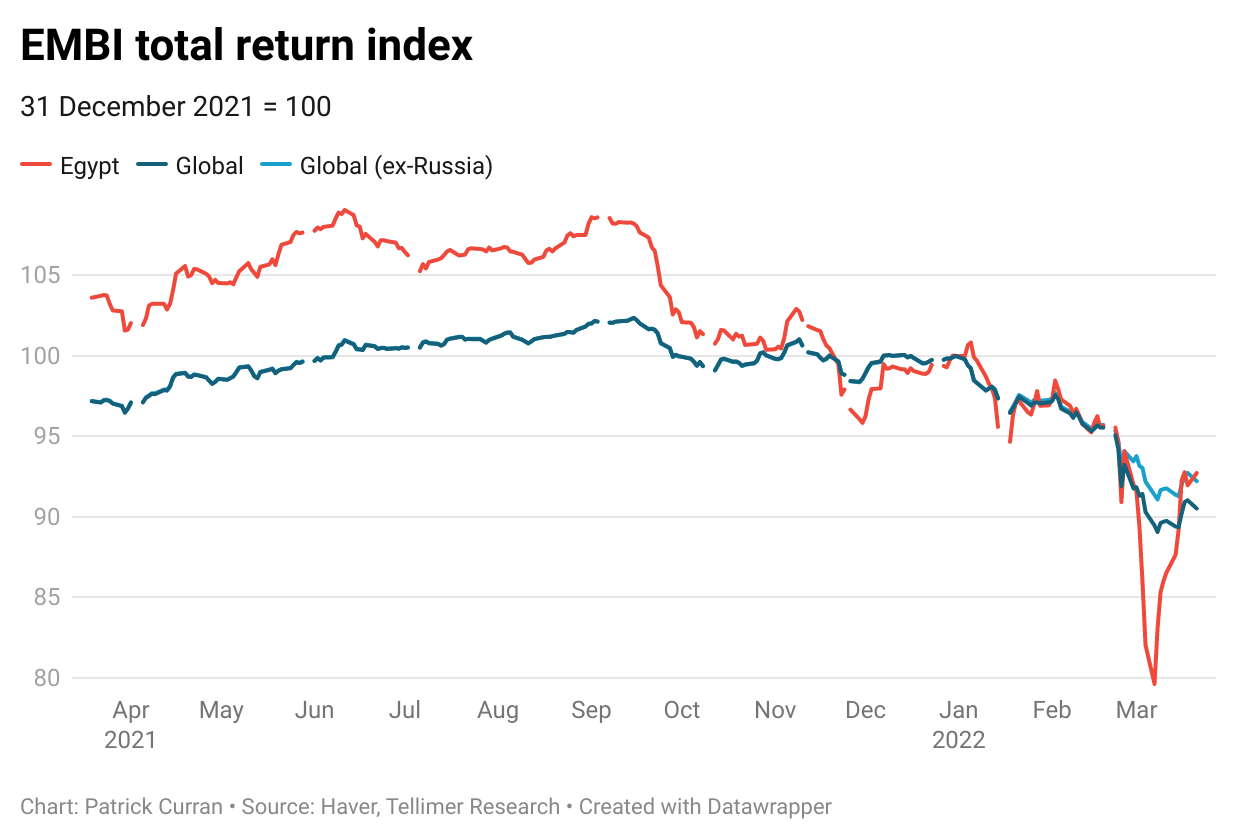 The Central Bank of Egypt (CBE) responded to rising inflation and external vulnerabilities by moving its policy meeting forward from this Thursday to yesterday and hiking its deposit and lending rates by 100bps to 9.25% and 10.25%, respectively. This will help combat the recent rise in inflation, which had already nearly doubled from 4.5% yoy in February 2021 to 8.8% in February 2022 on the back of rising food and fuel prices, and which is likely to increase further in the near term (likely exceeding the top of the CBE's 5-9% target). 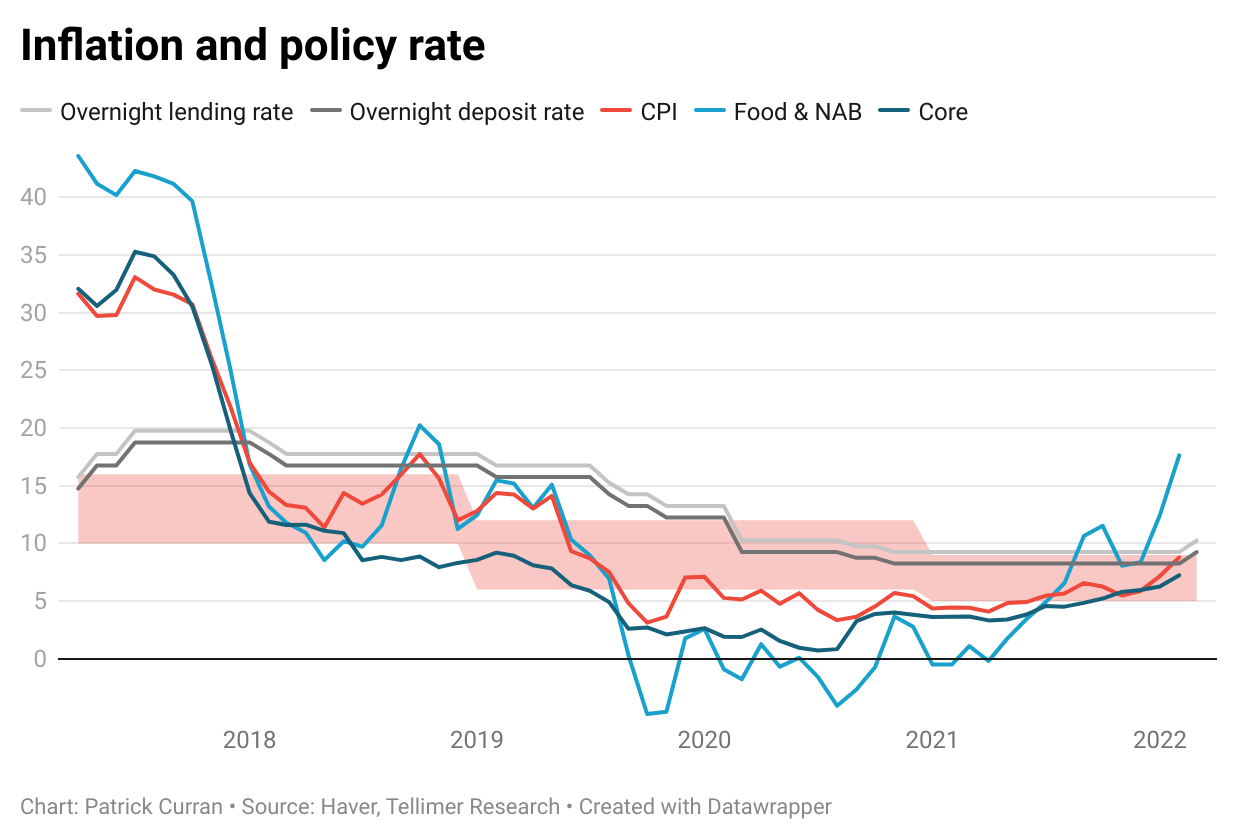 Further, after nearly 1.5yrs of the EGP effectively being pegged at 15.7/US$, it was finally devalued yesterday to 18.2/US$ and allowed to move further to 18.5/US$ at the time of writing today, a 15% devaluation (although essential imports will be subsidised at a preferential rate of 16/US$). It remains to be seen if the CBE will allow currency flexibility moving forward, but yesterday's MPC statement emphasised "the importance of the exchange rate flexibility to act as a shock absorber" and the 15% devaluation is an important step to prevent a BOP crisis in Egypt and begin to reverse nearly 70% of REER appreciation since the 2016 devaluation. 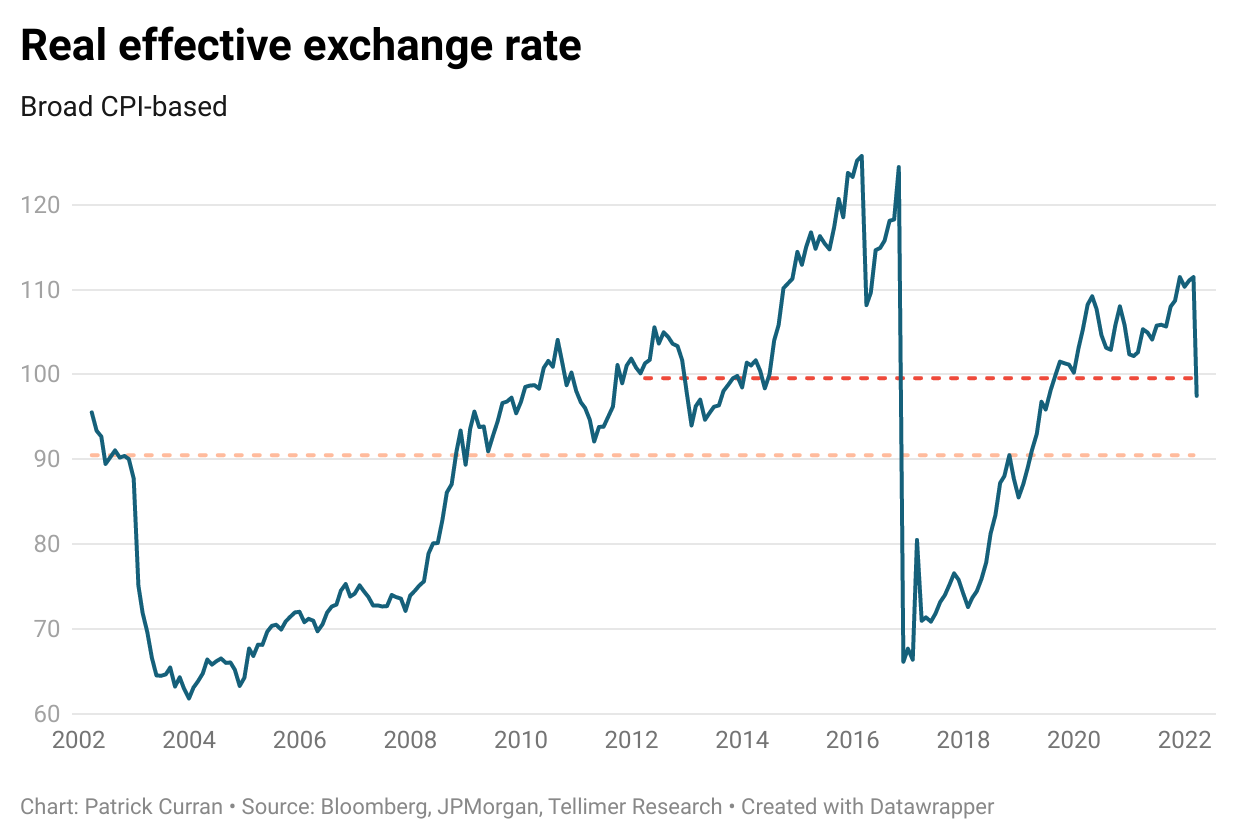 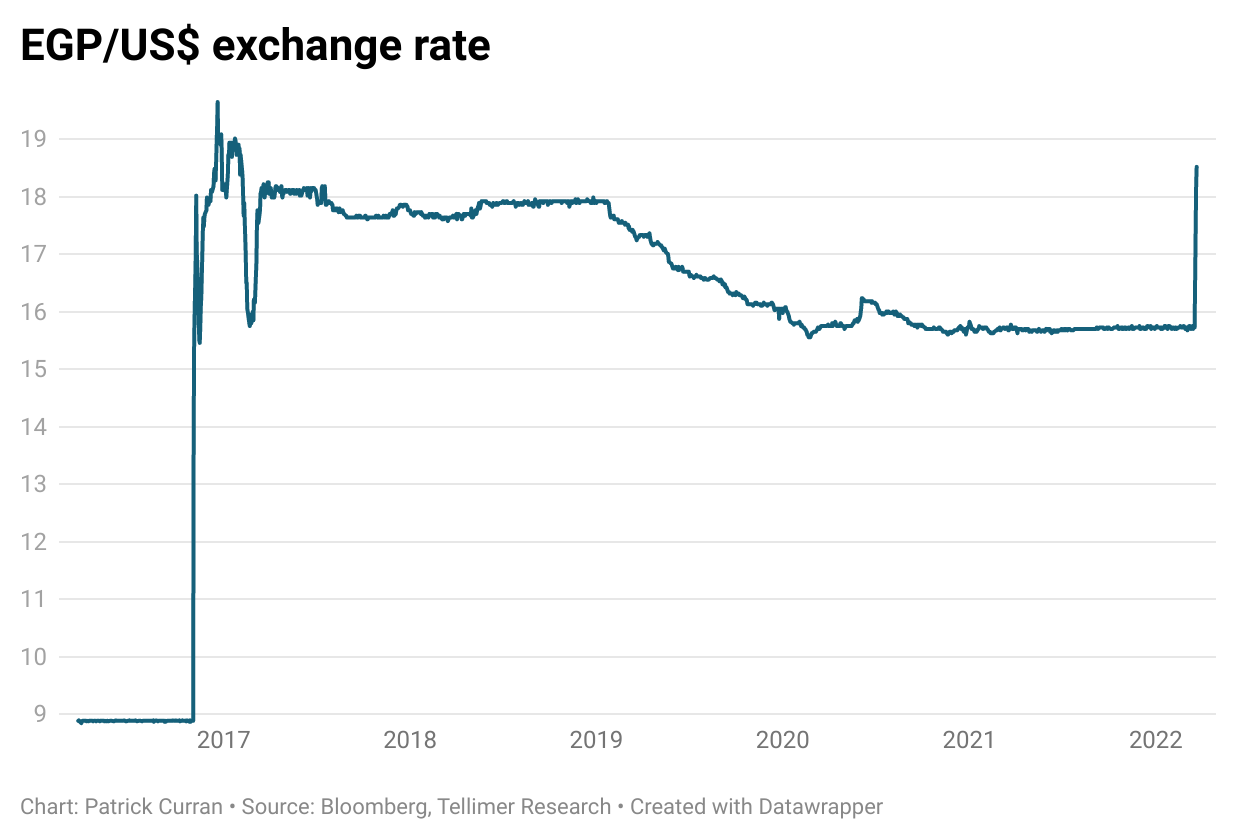 The policy shift follows reports that Egypt is in talks with the IMF for a possible funded or unfunded programme to address rising external pressures. While the discussions have not yet been confirmed, this would be a welcome step after the expiration of its SBA last June. Not only could it reduce the risk of a BOP crisis by providing funding and/or technical support, but it could also help backstop Egypt's reform agenda (including fiscal consolidation and privatisation), which looks increasingly to be floundering, and unlock access to additional financing sources.

That said, Egypt is certainly not out of the woods yet. In the IMF's 10 March roundtable on Ukraine, Managing Director Kristalina Georgieva said that "I worry for Egypt" in the event of sustained high food and energy prices.

Egypt is the world's largest wheat importer, with Russia and Ukraine comprising 86% of Egypt's US$2.7bn of wheat imports in 2020. In addition, the two countries account for 26% of Egypt's US$1.9bn of maize imports. Rising food prices will thus push up inflation while also worsening Egypt's BOP (global wheat prices are up 45% ytd) and budget (with the FY 21/22 budget already including US$5.5bn for food subsidies, which could rise by US$1bn according to government estimates).

Egypt currently provides bread at heavily subsidised prices for about 70 million people, and reducing its massive subsidy programme would come at a massive political cost (an attempt to end food subsidies in 1977 triggered violent protests and was eventually reversed). The government has also set price caps on unsubsidised bread (the price of which has risen by up to 25% since the invasion began) and banned exports of key staples like flour, lentils and wheat for at least 3 months.

Russia's invasion will also weigh on Egypt's tourism recovery, with tourism receipts rising to US$2.8bn in Q3 21 (below the US$4.2bn recorded in Q3 19 but well above US$800mn in Q3 20), largely due to Russia's decision to lift its 6-year ban on direct flights to Egypt in July. With Russians and Ukrainians making up over a third of all tourism arrivals, the war will be a major hit to Egypt's tourism sector.

Conversely, the impact of rising fuel prices on the BOP will be more limited, as Egypt exports roughly as much as it imports, but will further exacerbate the rise in inflation.

Lastly, a key risk factor for the BOP is the large stock of non-resident holdings of domestic government debt, which stood at US$28.8bn at the end of 2021. While foreign T-bill holdings have declined from a peak of US$24.2bn in September (25% of the total) to US$21.3bn in January (23% of the total), the stock remains relatively high and leaves Egypt vulnerable to further capital outflows (and indeed, data will likely show extensive outflows over the past month, when it comes out). 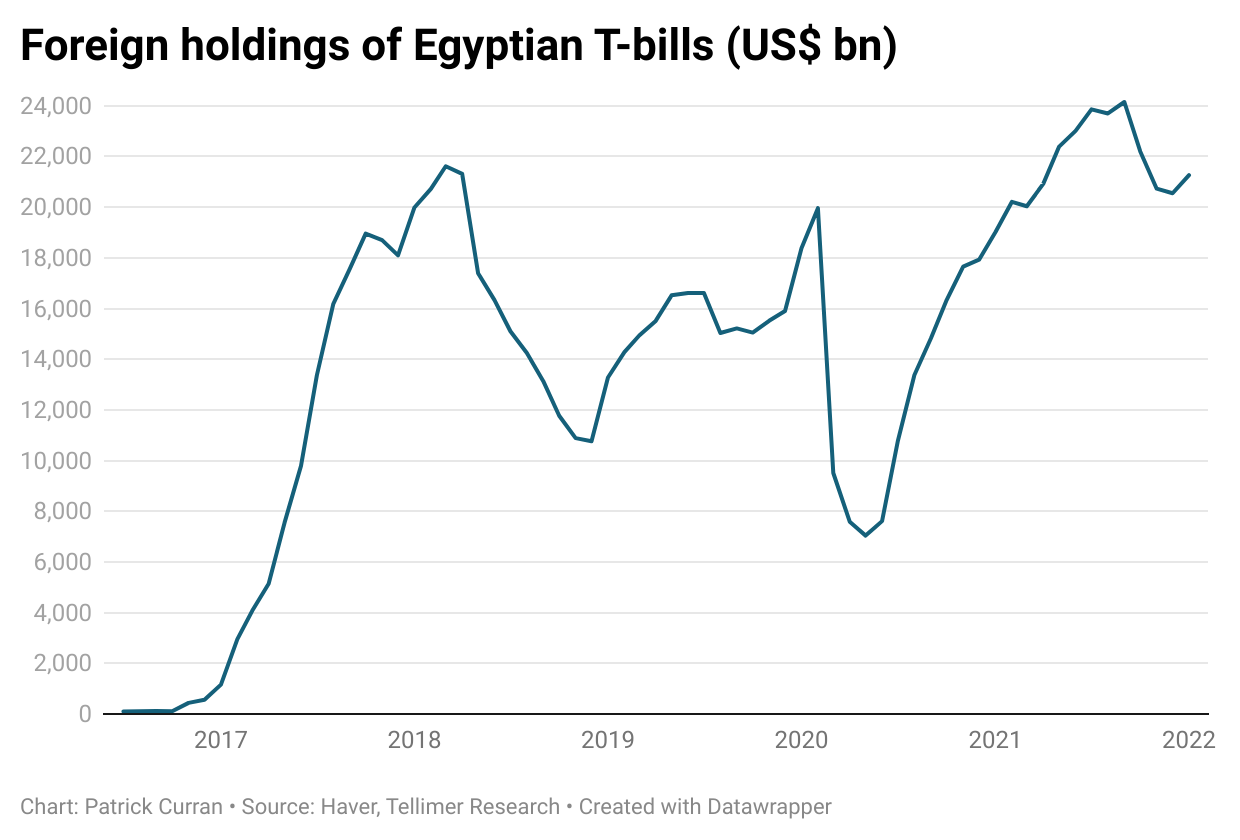 The stock is also high relative to Egypt's reserves buffers, with net international reserves trending up slowly to US$41bn (c6 months of import) in February from US$40bn at the end of 2020. This compares to US$14.75bn of external principal payments due over the next 12 months. Indeed, Egypt emerges as one of the most vulnerable EM in our recent update of our external liquidity index. 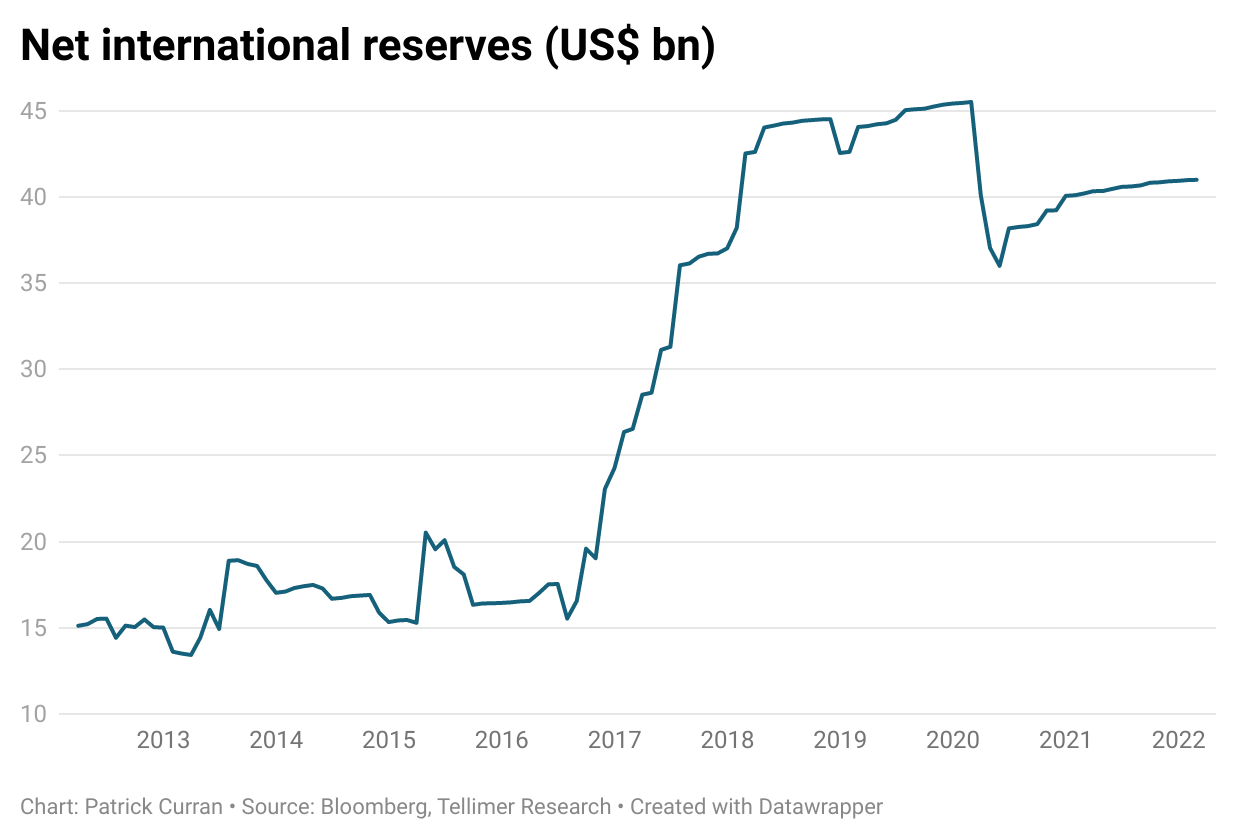 While Egypt's vulnerabilities remain high, yesterday's rate hike and devaluation are major positive steps to reduce Egypt's imbalances and set the stage for more fruitful IMF negotiations. And with inflation on the rise and robust GDP growth (up 5.9% in real terms over the first 9 months of 2021), there is room to tighten monetary policy further without unduly pulling down growth.

That said, rising interest costs could also lead to fiscal slippage, with the government recently revising its FY 21/22 budget deficit target from 6.7% to 6.9% of GDP (and further slippage now likely). Public debt is still likely to drop this year, but comes from a high base of c91% of GDP in FY 20/21. And with interest payments already totaling c8.5-9% of GDP in FY 20/21 (c50% of revenue), there is little margin for error. Further, with plans for a new US$2bn sukuk issuance in Q2 potentially set back for the time being due to higher global risk aversion and yields, there could be a greater burden on the domestic financial sector to finance the deficit (although the government seems intent on pushing forward with those plans, and has also announced plans to issue a US$500mn yen-denominated bond).

On the external front, robust remittances (up 9% yoy through the first 9 months of 2021 to US$24bn) and Suez Canal receipts (up 15% yoy in the 12 months through February to US$6.5bn) could help offset some of the negative impact from the conflict. However, the current account deficit widened to US14.8bn (3.6% of full-year GDP) over the first 9 months of 2021 from US$9.4bn (2.6% of GDP) in the same period of 2020, and is likely to rise further in the quarters ahead. Alongside elevated external financing needs and risk of capital flight, further policy action could be needed to stave off a BOP crisis.

Rising global risk aversion will also delay Egypt's plans to resume its largely moribund privatisation programme this month (with stakes in just 3 companies sold since the programme was launched), with the finance ministry announcing plans to offer stakes in 10 state-run firms on the Egyptian stock market in the coming year. That said, Abu Dhabi wealth fund ADQ has reportedly agreed to buy cUS$2bn of state-held shares in four companies, including Commercial International Bank and Fawry, and Saudi Arabia's Public Investment Fund is also reportedly considering investments in the country, indicating that Egypt may be forging ahead with its privatisation plans despite the weaker investment backdrop.

Privatisation is a necessary step to shift to a more sustainable growth model and develop a more robust private sector in Egypt's still largely military-dominated economy, barring which Egypt’s economy will be unable to sustain high growth rates over the longer-term.

Given rising external vulnerabilities from Russia's invasion of Ukraine, yesterday's policy moves and the potential turn to the IMF are welcome and necessary steps to stave off a BOP crisis and keep Egypt's fiscal consolidation plans on track. However, as we highlight above, vulnerabilities remain high.

On the hard currency front, we upgraded Egyptian eurobonds to Buy on 20 October on a relative value basis due to prior underperformance. Since then, it is broadly in line with the EMBI Global index, falling 8.4% in total return terms versus -9.1% for the EMBI Global as of 21 March (or -7.4% excluding Russia). Given the rate hike, devaluation, and potential IMF programme, we think Egypt's near-term prospects have improved markedly, and retain our Buy recommendation at a mid-price of US$85.3 (9.95% YTM) for the EGYPT 7 ⅝ 05/29/2032s as of cob on 21 March on Bloomberg (with the recent sell-off providing a better entry point, but also reflecting far greater risks). 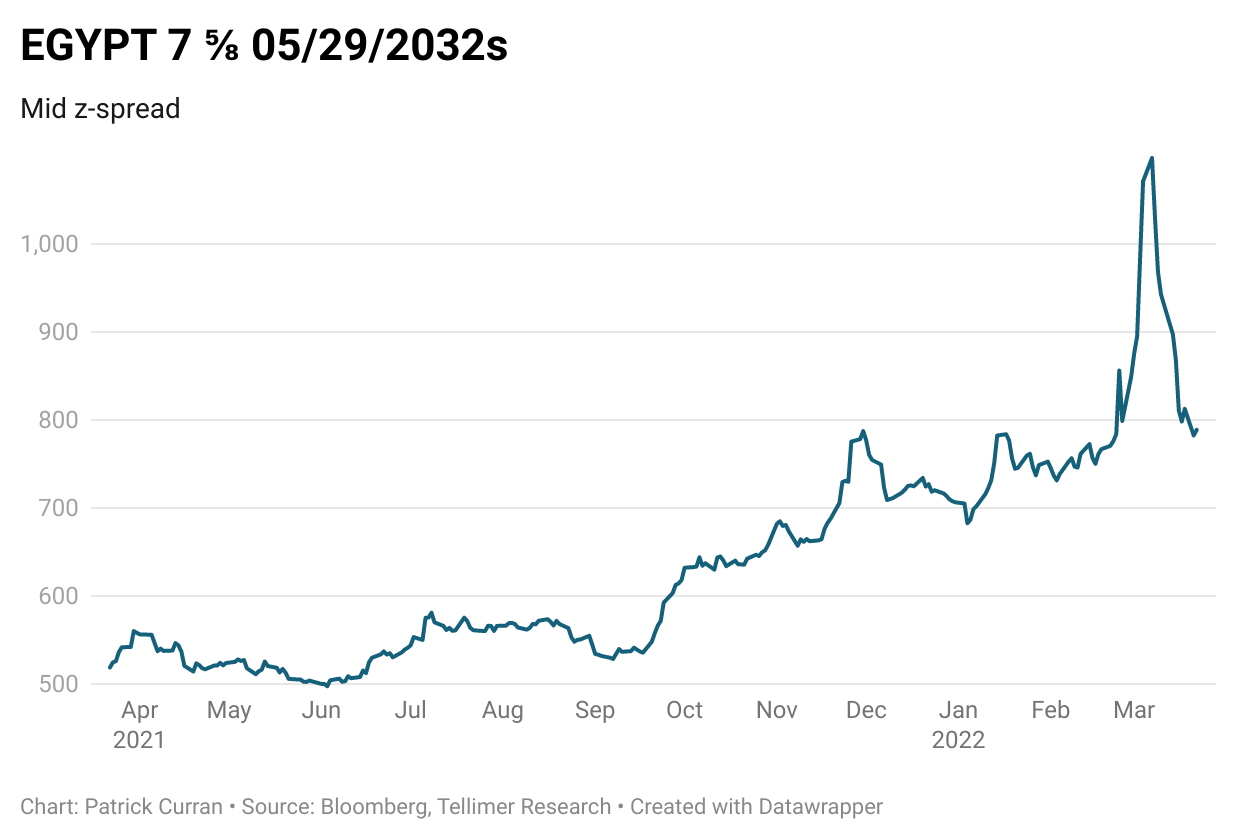 On the local currency front, rising inflation has eroded Egypt's positive real rate differential, but with 12-month T-bills still yielding over 13% versus inflation of 8.8%, Egypt still has relatively attractive real yields of c4-4.5%. However, while yesterday's devaluation erases some of the pent-up overvaluation of the EGP and provides a much more attractive entry point, external vulnerabilities remain high and further depreciation may be necessary to cushion rising BOP weakness (12-month non-deliverable forwards are now priced at 20.5/US$, pricing a further 10% devaluation over the next year). 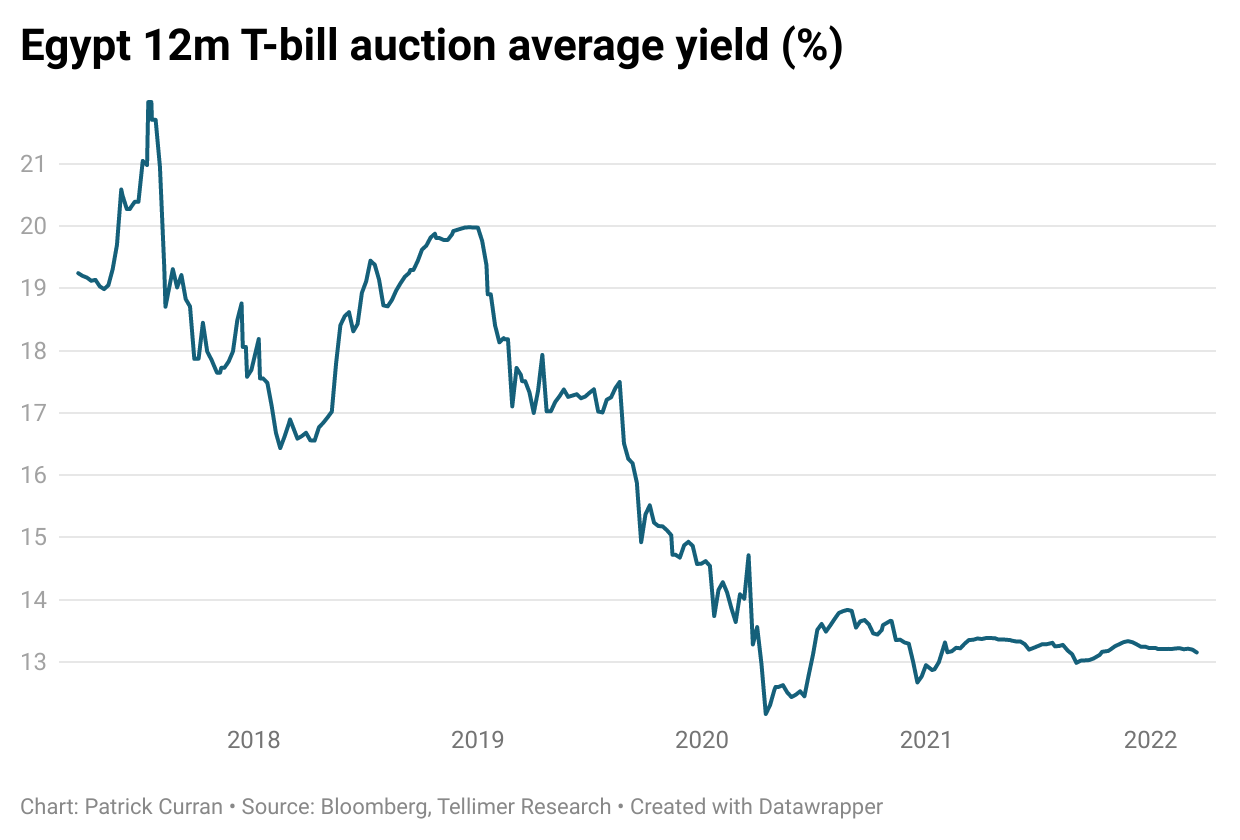 High global risk aversion also makes for a less favourable carry trade backdrop, and given the rise in hard currency yields relative to domestic yields, we think any positive view on Egypt is now best expressed in hard currency terms rather than domestic debt. As such, we downgrade our recommendation on 12-month Egyptian T-bills to Hold from Buy at a mid-YTM of 13.15% as of the latest auction on 17 March.

Egypt equities (EGX30 index) are down 16% ytd in total US$ return terms, compared to down 2%, 7%, and 9% for MSCI FEM, FM, and EM, respectively. They have dropped 7.5%, in US$ terms, since the announcement of the rate hike and devaluation. This is partly because those actions represent a partial clearing of the decks (getting bad news out of the way) but also because, for local investors, equities act as a partial hedge for inflation.

For foreign investors focused on small emerging and frontier markets, the range of countries offering exposure to commodity exports, look more appealing in the short term, but among the cheaply valued, stalled structural reformers, Egypt looks attractive alongside the likes of Indonesia, Pakistan, and Philippines.

For Middle East portfolios, Qatar is more appealing (gas exports, low sovereign risk, at a smaller premium to historic average valuation than the likes of Saudi or UAE).

For Africa portfolios, Egypt is the cheapest versus historic average, and has at least taken policy action to address some of the distress from high imported commodities and lower global risk appetite, unlike, for example, fellow importer Kenya, and has authoritarian tools at its disposal to combat potential social unrest in a manner not available in the likes of Kenya, Nigeria, or South Africa.