The IMF announced yesterday staff-level agreement (SLA) on the combined second and third reviews of Ecuador's US$6.5bn (661% of quota) extended fund facility (EFF), which was approved a year ago, after the first review was approved in December 2020. Board approval of the reviews is expected in the coming weeks, subject to completion of (unspecified) prior actions, and, according to the IMF statement, will allow for the disbursement of US$800mn that can be used for budget support. So far, 60% of programme funds have been disbursed.

The second review was delayed due to the elections earlier this year. New conservative President Guillermo Lasso took office on 24 May, after winning the run-off in April against leftist Andres Arauz, although his new economic team, led by Finance Minister Simon Cueva, has worked quickly to reach this milestone with the Fund. The IMF welcomed the new government's commitment to the IMF programme and applauded the speed of its vaccine rollout – jabs have been administered to half the population in the first 100 days of the new administration taking office.

The IMF expects the economy to rebound this year after last year's record contraction. Real GDP fell by 7.8% in 2020, but growth of 2.75% is projected this year, rising to 3.5% in 2022. Medium-term growth is still, however, projected at a relatively modest 2.75%. Meanwhile, the IMF notes that fiscal performance has been better than expected, due to higher revenues, expenditure restraint and higher-than-expected oil prices, and that there has been "important progress" on the structural reform agenda, notably with regards to strengthening central bank autonomy through the amendment of the Organic Monetary and Financial Code (COMYF).

Going forward, the authorities are also committed to an ambitious structural reform agenda, including improving public financial management (PFM), enhancing transparency in the management of public resources and operations of state-owned enterprises (SOEs), tackling corruption, reforming the public-private partnership (PPP) framework, capital and labour markets, and improving the business environment. However such bold intentions may be stymied, as in the past, by a fractured Congress.

Significantly, the IMF notes that the programme is being revised in terms of the pace and composition of policies in line with the government's own plans, although we await publication of the staff report following board approval as to what this means (whether this includes a programme extension, or augmentation, or just a rephasing and revised targets is unclear).

According to media reports, Lasso had asked for modified targets to meet campaign pledges, including not to increase VAT, and the IMF noted that higher revenues and stronger growth had provided some space to accommodate higher immediate spending needs. Yet, far from the new government seeking softer terms, the IMF noted – in a point repeated by Minister Cueva speaking separately at a local press conference announcing the technical agreement with the Fund – that the authorities favoured reducing public spending by more than was initially envisaged in the programme, in order to ensure fiscal sustainability.

In addition, the finance minister added at the press conference that the government is preparing an economic reform package, including taxes to be submitted within weeks (likely one of the prior actions mentioned above). Bloomberg reported an adviser to President Lasso saying that economic reforms will be submitted as a fast-track bill in a few days. With an approval rating of 74%, Lasso hopes he can capitalise on the public's goodwill after the vaccine success.

The finance minister also noted that the IMF will disburse a total of US$1.5bn this year in two tranches and US$1bn next year, and that he expected US$4.5bn in multilateral loans through the end of 2022. However, while this is no doubt positive, it is not clear what gross financing needs are over this period and what financing is available to cover it, although the authorities believe financing needs will be covered this year as a result. The government had expected a central government fiscal deficit of 4.6% of GDP this year.

We upgrade our recommendation on Ecuador's dollar bonds to Buy from Hold, with a yield of 8.4% (z-spread 738bps) on the 5% 2030s as of cob 8 September on Bloomberg (mid-price basis). Ecuador (Caa3/B-/B-) has been one of the best-performing markets this year (following the market-friendly election result), with a total return of 40% YTD on the ‘30s, compared with 0.6% on the Bloomberg EM Aggregate Index. 8% for an improving credit still seems attractive to us, especially one with its post-restructuring debt service profile. Note the coupon on the 2030s and 2035s stepped up in July, from 0.5% on both of them to 5% and 1%, respectively; a higher running yield may add to investor interest.

Our more positive view (somewhat overdue under this new administration, although the initial market reaction was more based on hope than experience; the SLA is really the first tangible demonstration of its economic competence) is based on the authorities' commitment to sound policies, structural reforms and the IMF programme and strengthening ability to pay. As well as a significant amount of expected IFI financing, Ecuador's international reserves rose to US$5.9bn in August, buoyed by the IMF SDR allocation (amounting to US$950mn). That said, fiscal and structural reform implementation still pose a challenge while we await more detail on financing arrangements. The main downside risks are if the IMF programme goes off track and/or lower oil prices. 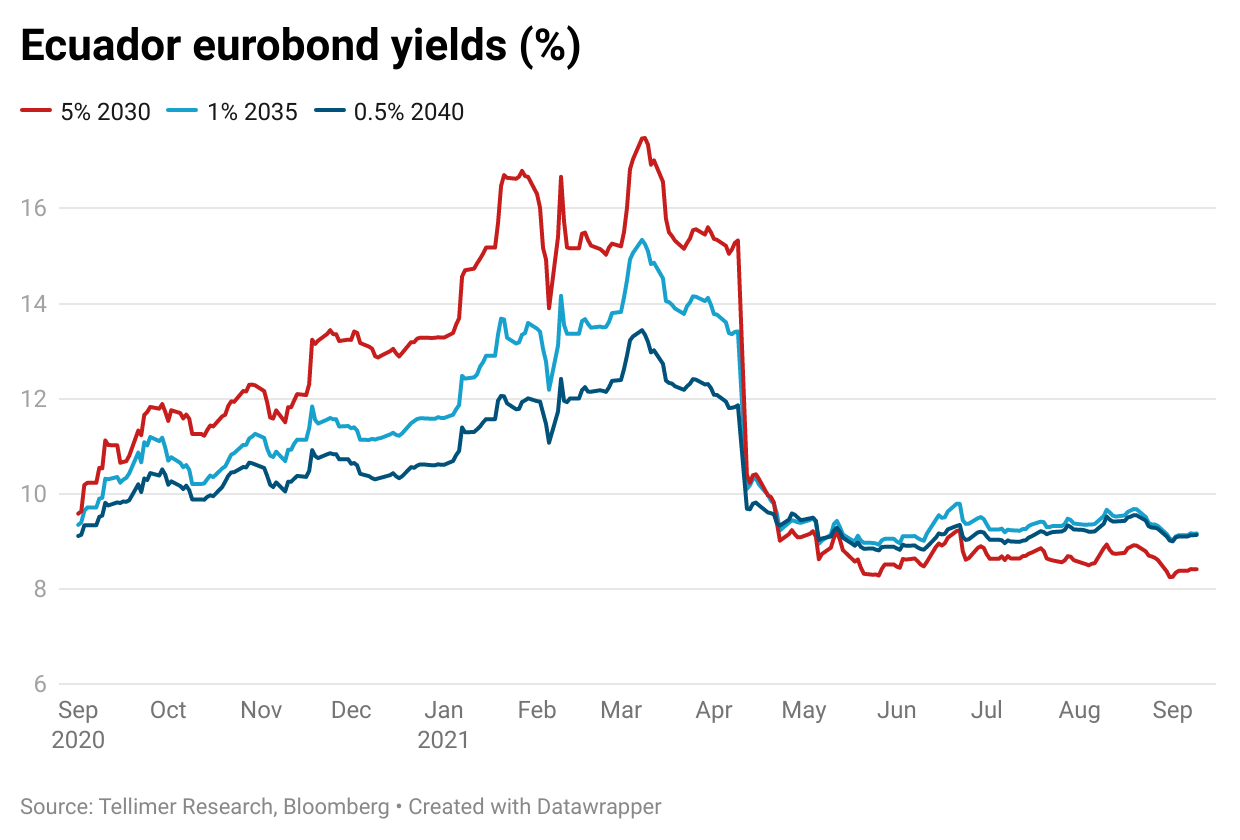