The IMF Board approved the combined fourth and fifth reviews of Ecuador’s extended fund facility (EFF) on 24 June. It follows the announcement of staff-level agreement on 11 May and so is not unexpected.

Board approval allowed the immediate disbursement of cUS$1bn, which the authorities intend to use for budget support, taking total disbursements under the programme so far to cUS$5.75bn (89% of the total amount available). The programme is for a total amount of US$6.5bn (661% of quota).

The combined review was approved with waivers and a commitment to undertake various remedial measures, as well as corrective actions already taken, although we don’t think that affects the substance of the performance under the programme, which has been satisfactory. The IMF noted good macroeconomic management while higher oil prices have improved external and fiscal accounts. The IMF noted that the enactment of a “progressive” tax bill last year marked an important milestone in improving fiscal sustainability. However, fuel subsidy reform has been suspended.

The authorities are also committed to strengthening governance and accountability, including asset declarations of politically exposed people, the AML/CFT framework and beneficiary ownership for procurement contracts, and are moving forward with more transparency in state-owned oil companies after delays.

However, an updated table of macroeconomic projections was not included in the press release. We await publication of the staff report for more detail.

That said, despite the good news on the IMF programme review, more challenging external financing conditions allied to protests sweeping the country have seen Ecuador’s bonds fall sharply this month. Ecuador’s 2030 bonds have fallen by 12pts in the latest sell-off, since 6 June, from US$82.4 to US$70.2 to cob 24 June on Bloomberg (mid-price basis), with the yield rising by 364bp to 14.1%, making it one of the worst performers in this leg. This is around the same price decline YTD although the bonds reached a peak for the year of US$89 in mid-February. 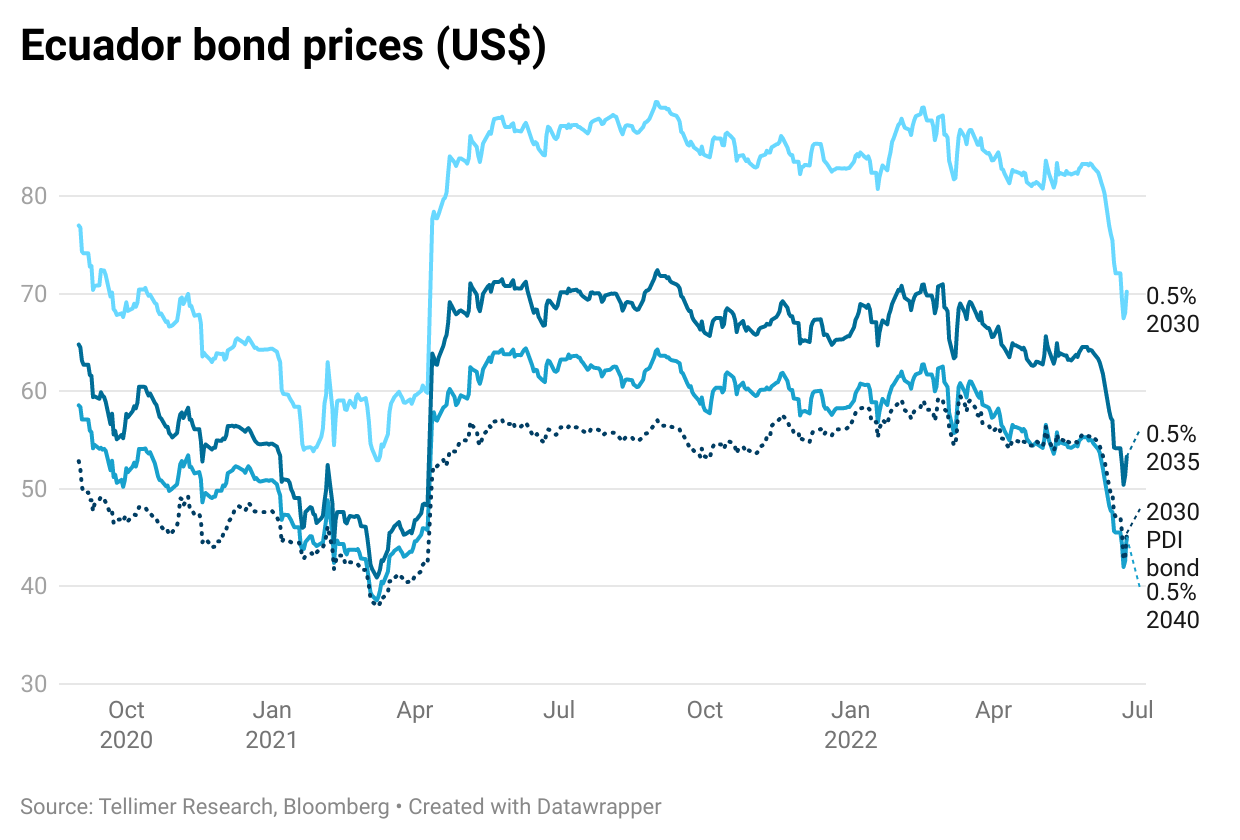 Anti-government protests led by the indigenous group Conaie (the Confederation of Indigenous Nationalities of Ecuador) began two weeks ago and have spread across the country. Protesters' demands include lower fuel prices and price caps on agricultural goods. Tensions were further inflamed after the arrest of Conaie’s leader Leonidas Iza while a number of people have reportedly died or been injured in clashes with police.

And, as a consequence of roadblocks and vandalism, Ecuador's Energy Ministry warned yesterday that oil production could come to a halt within 48 hours if this continues.

Last week, Iza reportedly ruled out dialogue with the government after previous failed attempts although President Lasso lifted a state of emergency on 26 June that had previously been imposed on a number of provinces in order to facilitate talks. Iza has vowed to continue demonstrations until they have results.

Separately, the main opposition party is seeking to remove the president, who only took office a year ago, although it appears to lack the required support in the national assembly to achieve this at this stage. At the opposition's request, the assembly held a no-confidence hearing over the weekend although a vote on whether to impeach the president was postponed until Tuesday (28 June), according to overnight reports, after Lasso announced late on Sunday fuel price cuts to try to appease protestors. It is not clear if this will be enough. Lasso's removal requires 92 votes out of the 137 in the assembly and, while the Union for Hope coalition that has sought the motion has 47, a number of parties have rejected the call. Vice President Alfredo Borrero will assume interim power and call new elections if Lasso is removed.

To add to investor concerns, as we noted in May, the IMF programme is due to expire in six months’ time. The 27-month EFF was approved in September 2020 and is due to expire in December. With two reviews left under the original schedule – the sixth and seventh from 15 August and 1 December, respectively (with disbursements amounting to US$300mn and US$400mn each) – it is not clear what will happen after. This will become more important for investors as time passes, especially if unrest persists and given the political situation.

It was perhaps unlikely that Ecuador would have been ready to go it alone, and yet, while tougher external financing conditions have made a programme extension or successor arrangement even more necessary (both for policy discipline but even more so for the IFI financing it would catalyse), the challenging social backdrop and outlook for governability may make political support for this, and implementation, even harder.

More immediately, however, investors will also hope that the current unrest and political challenges do not jeopardise the final programme reviews as that would blow a hole in the government's financing plans.

Financing needs are still relatively sizeable, after all, for which the government relies on multilateral financing. We estimate gross fiscal financing needs this year of cUS$7bn based on the government's 2% fiscal deficit target and expected amortisation of US$4.8bn as per the staff report for the second and third reviews last October (we await publication of the new staff report for updated figures).

Most of the financing is expected to come from external financing sources, and this is mainly from multilaterals under the IMF umbrella programme. Finance Minister Cueva said in May that a further US$700mn was expected from the Fund by the end of the year (ie the sixth and seventh reviews) and that the government expected to receive more than US$3.5bn in multilateral loans by year-end (as per the IMF programme). We note the government has already received US$700mn from the World Bank in February and US$250mn from the IADB in April.

The outlook for 2023, especially without an IMF programme, is, however, less clear.

The bonds are down c13pts (yield +c400bps) since we reiterated our Buy recommendation on 12 May at the time of the staff-level agreement. And, while Ecuador has fractionally outperformed the index YTD with a total return of -17.7% compared with -19.0% on the Bloomberg EM sovereign USD index, most of its negative return has come in this month’s sell-off. The total return has been -15.7% since 6 June compared with -4.2% on the index.

Political uncertainty may continue to weigh on the bonds, but high oil prices and the boost this provides to the fiscal and external accounts could offer some support (although not if there is no production), while default risk should be mitigated by the favourable post-restructuring debt service profile on bonded debt. 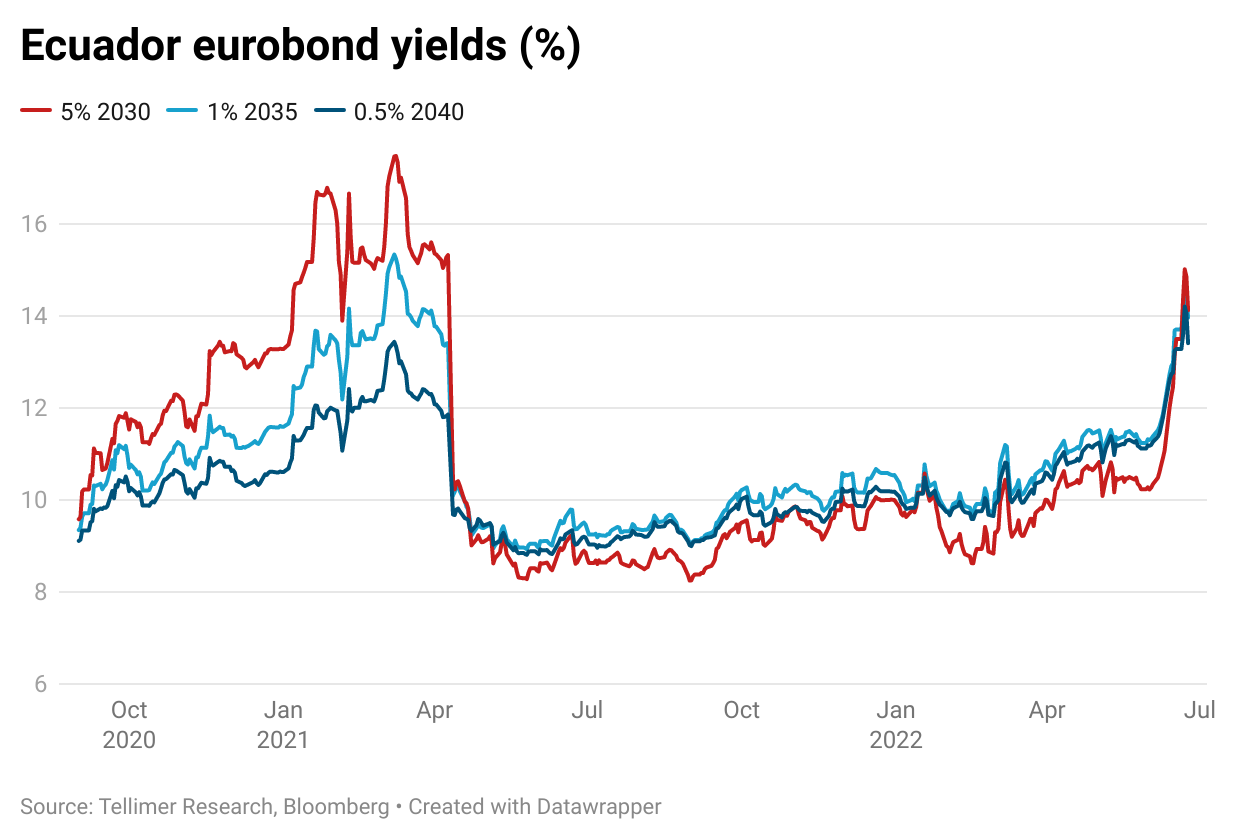