Guillermo Lasso, conservative ex-banker and preferred market candidate, has been elected Ecuador's next President. He defeated Andres Arauz, the leftwing candidate of former President Correa, in Sunday's run-off vote following the first round in February. For Lasso, this is third time lucky, after he suffered election defeats in the two previous presidential elections (2013 and 2017).

Lasso gained 52.44% of the vote, with Arauz on 47.56%, at the time of writing, according to the national electoral council, a margin of victory that translates to 419,000 votes (see official CNE results page here). 98.65% of the votes have been counted.

The result doesn't look like it will be contested. Arauz quickly conceded defeat, while regional leaders in Chile, Colombia, and Uruguay have congratulated Lasso, according to media reports.

The result is a stunning victory for Lasso who overturned the odds after trailing Arauz in the first round by some 13ppts; indeed, recall that initially it seemed Lasso was in the third place and hadn't even made it to the second round. Most opinion polls for the second round still put Arauz ahead of Lasso.

As a result, the outcome may have been largely unexpected. That said, Bloomberg reported on two opinion polls at the end of March (from Atrevia and Click Research) that showed Lasso had overtaken Arauz, as did a poll by the well-respected Cedatos (52% for Lasso vs 48% for Arauz). Lasso's strength in the polls was attributed to his better showing in the presidential debate and more effective social media campaign, which allowed him to attract support from other candidates in the first round, while Arauz's campaign drifted after his first round victory.

The surprise result will be welcomed by bondholders. Lasso represents continuation of Moreno's orthodox and reformist policy approach. Lasso has pledged to pursue free-market policies, and is likely to seek closer relations with the US (instead of China) and continue to engage with the IMF (Arauz had explicitly called for the programme to be renegotiated). We think Lasso will likely try to stick to the IMF programme, although we wonder if it will need to be rephased somewhat in light of events, given delays to the current second review; or perhaps it could be cancelled and a new one agreed, in line with the new President's economic vision.

However, governability will remain challenging (as it was for Moreno). Market optimism will be tempered by a left-leaning Congress that could seek to block Lasso's free-market and reformist zeal while the success of the indigenous party of Yaku Perez (who came third in the first round of the presidential election, and subsequently called for ballots to be spoil in the second round) could also act as break on policy making. Following the National Assembly elections in February, leftist parties have a majority in the unicameral chamber. Arauz's party (CD-FCS), the biggest party with 49 seats, Perez's Pachakutik the next biggest on 27 seats and the Democratic Left in joint third with 18 seats, together have 94 seats out of the assembly's 137 seats. Lasso's CREO party is the fifth largest party in the National Assembly with 12 seats and he'll have to seek alliances.

And what next for Rafael Correa? The result is also a slap in the face for former president Correa, who likely saw Arauz's victory as a way to return to the country.

The new president takes office on 24 May.

We upgrade our view on the bonds to Hold from Sell, with the yield on the 0.5% 2030s at 15.3% (mid-price basis) as of cob 9 April on Bloomberg (with a mid-price of cUS$59.8). The bonds have reversed their declines in the aftermath of the first round, when they reached a low of US$53, likely in line with Lasso's improving chances judged by some of the polls and maybe optimism that Arauz would take a more pragmatic course if elected. The bonds are still however c5pts below their end-2020 level, and 10pts below their post-restructuring high.

We think the bonds could trade a bit higher in the near term, in a relief rally, but the main upside catalysts will be provided by a resumption, and continued implementation, of the IMF programme, the shape of Lasso's economic team, and early indications on the ease of governability (or otherwise), on which there remains some uncertainty, especially amid sizeable external funding needs and limited funding options. 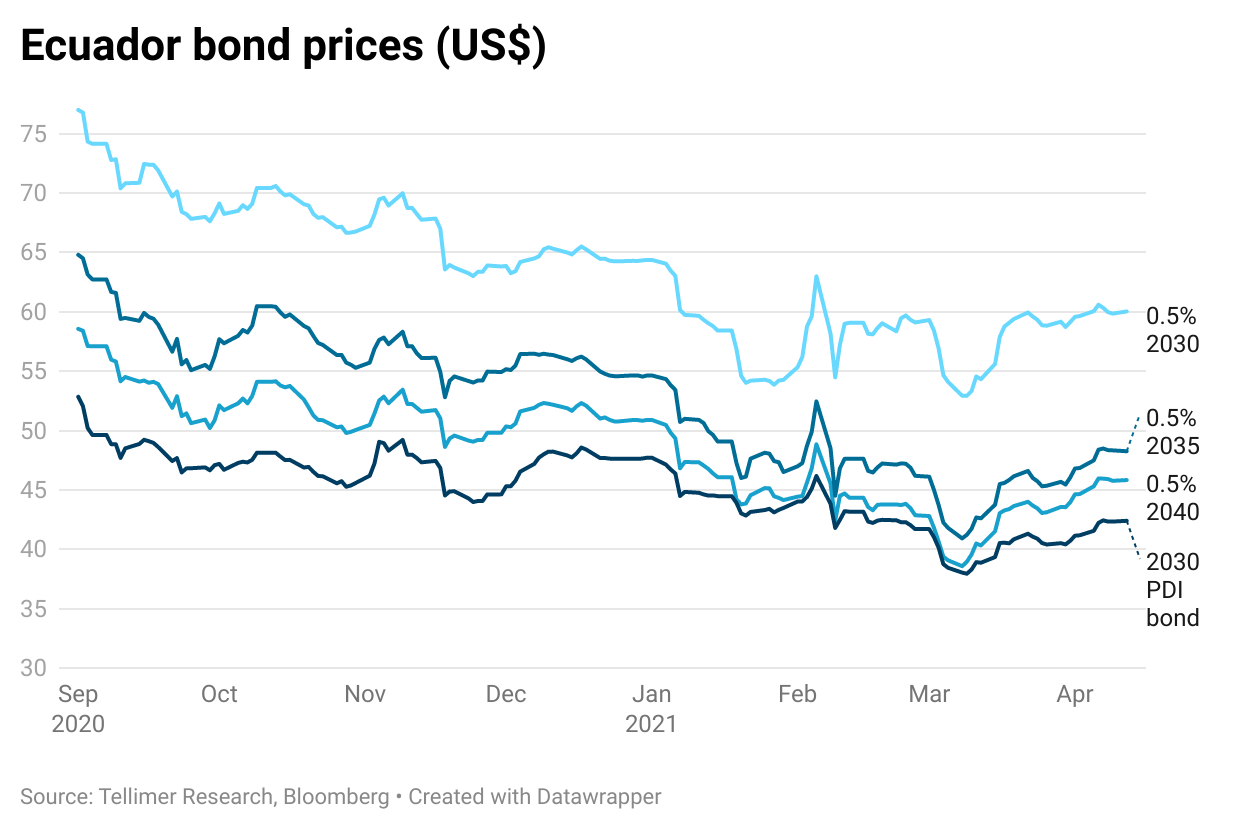