A more fragile fiscal outlook. The combination of risk on and the buyback news on 13 October triggered a handsome rally of Ecuadoran notes that have gained 40.5% on average vs 7.3% of the benchmark JP Morgan USD Sovereign bonds ETF. Going forward, the main question is not only whether this overperformance can hold but what are the chances of reversal. For sure, global factors will continue to play a major role. If sustained, the recovery of risk appetite should bode positively for Ecuadoran bonds, whose valuations have dipped into the distressed zone. However, relative to mid-October (see Ecuador Economics and Strategy: “We prefer short-term bonds to capture impact of positive news”, 18 October) we think that fiscal fundamentals have deteriorated. In this regard, we have turned more sceptical about the expected 2023 asset sales and privatisations schedule, which will dent expected revenues. In turn, this would imply a higher fiscal deficit and the need to bring forward spending cuts that could have a negative fallout in terms of domestic politics. Thriftiness could be met with the resistance of the indigenous community that in early 2023 is set to revise the progress of the measures negotiated with the government earlier this year. 2024 might be even more challenging from a fiscal point of view, as authorities could be forced to shave expenditures further to bridge the financing gap. In a backdrop of weaker oil prices and slower growth, this would be an unwelcome development due to the proximity of the February 2025 general elections, and may hinder the possibility of tapping international markets. Hence, it will be vital that Ecuador obtains additional multilateral support or becomes more active in securing green financing, although this last alternative would be hard to reconcile with the government’s pro-mining stance. 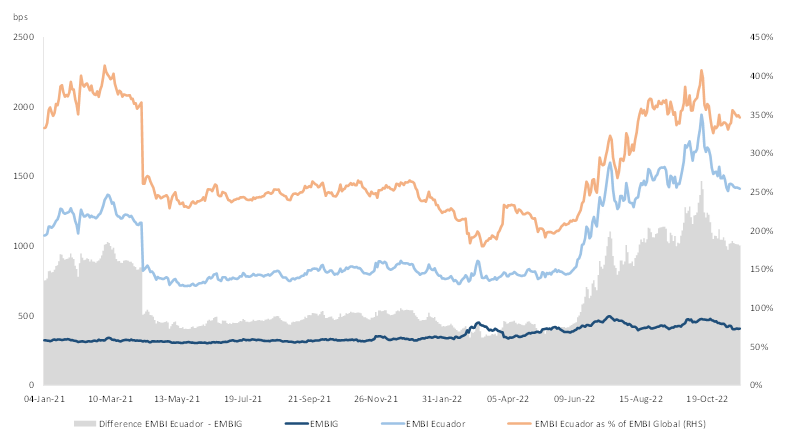 Source: BancTrust & Co. estimates based on JPMorgan and Bloomberg

0% 30s could gain the most in risk on, but risk-reward seems more balanced for the 5.5% 30s. Despite mounting domestic headwinds, we think that the positive impact of external tailwinds would prevail in terms of narrowing the massive increase in relative spreads that took place since June 2022 (Chart 1). By 13 October, Ecuadoran spreads had reached 1,945bps, 4.1x the EMBIG, compared to only 2.0x before indigenous protests reignited last June. The ratio of Ecuadoran spreads to the EMBIG is currently hovering around 3.5x and we see it coming down to 3.0x by year-end if risk on persists. Holding the EMBIG constant, this would imply a further spread compression of around 200bps. In our view, the negative slope of the yield curve could moderate, with spreads falling more in the short end (Table 1). As a result, the 0% 30s would offer the highest return potential (see Table 1 and Chart 2), followed by the 35s. The 0% 30s would also appreciate relative to the 5.5% 30s, which would have benefited more from the news of the buyback. On the other hand, if risk off resumes, we could see more limited downside for the 5.5% 30s insofar as we are right about government demand from the buyback focusing on these securities (see We prefer short-term bonds to capture impact of positive news). 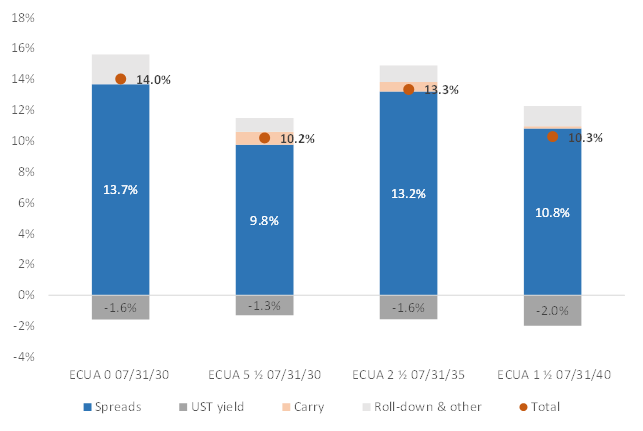 2022 fiscal targets seem on track. Based on the latest fiscal data up to Sept-22 and with conservative assumptions for 4Q, the government is poised to meet its 2% of GDP deficit target for the central government (PGE) in 2022, down from a 4% of GDP deficit in 2021. On the revenues side, tax collection will likely increase 0.7ppts of GDP throughout 2022, boosted by the temporary positive impact of the 2021 tax reform together with bouncing activity and inflation. In addition, oil revenues will spike in 4Q22, as export volumes will benefit from the low base of comparison driven by the 30% plunge in exports due to the shutdown in oil pipelines in 4Q21. Non-permanent expenditures are set to contract by more than 1ppt of GDP largely due to the phasing out of 0.7% of GDP in social benefits. This will offset the 0.4ppts and 0.2ppts of GDP rise in personnel and operational spending that is unrelated to fuel imports.

Source: BancTrust & Co. estimates based on Ecuador Ministry of Finance

Revenues shortfall will put pressure on fiscal accounts in 2023. The 2023 budget submitted on 31 October envisages a 2.1% of GDP deficit, which is too optimistic in our view. The budget assumes USD1.2bn in revenues to which we assign a very low probability, namely the USD200mn profits from the sale of the stated-owned bank “Banco del Pacifico” and USD1bn from the privatisation of the “Sopladora” hydroelectric dam and the “Monteverde” sea terminal. We excluded these revenues because the auction for the sale of the bank was declared void on 10 November and because the government has not provided arguments to make us confident that privatisations would make a leap in 2023. We could see further downside if the renegotiation of telecommunication licenses (USD101mn) and the renewal of the OCP oil pipeline conocession (USD200mn) also founder . On top of this, our oil exports estimates are USD0.7bn below official expectations, which we think to be based on excessively upbeat oil production forecasts. The Finance Ministry assumes oil production to increase by 12mn barrels allowing exports to jump by 11mn barrels to 130mn. Instead, we anticipate 2023 exports to rise by only 3mn barrels to 118mn (Table 3), as oil output will be held back by the concessions made to the indigenous to stop new oil ventures together with the nullification of oil sector reforms ruled by the Constitutional Court in October. In line with our view, Energy Minister Fernando Santos Alvite sees 2023 oil output at 177mn barrels, up 3mn relative to our 2022 production estimate.

We also see slower economic growth relative to official assumptions, which will take a toll on revenues and also lead to a 0.5ppt uptick in spending as a share of GDP. These setbacks would force the government to axe non-permanent expenditures, mostly related to public investment, to avoid a 1.5ppts of GDP fiscal slippage. We expect the government to cut non-permanent outlays by USD1.1bn (0.8ppts of GDP) relative to the budget, which would still take the central government’s fiscal deficit to 3% of GDP (up 0.8ppts versus the budget’s goal). This would be consistent with the 0.8% of GDP non-financial public sector deficit we outlined in We prefer short-term bonds to capture impact of positive news, with the difference that back then we had not factored in unpopular spending cuts. 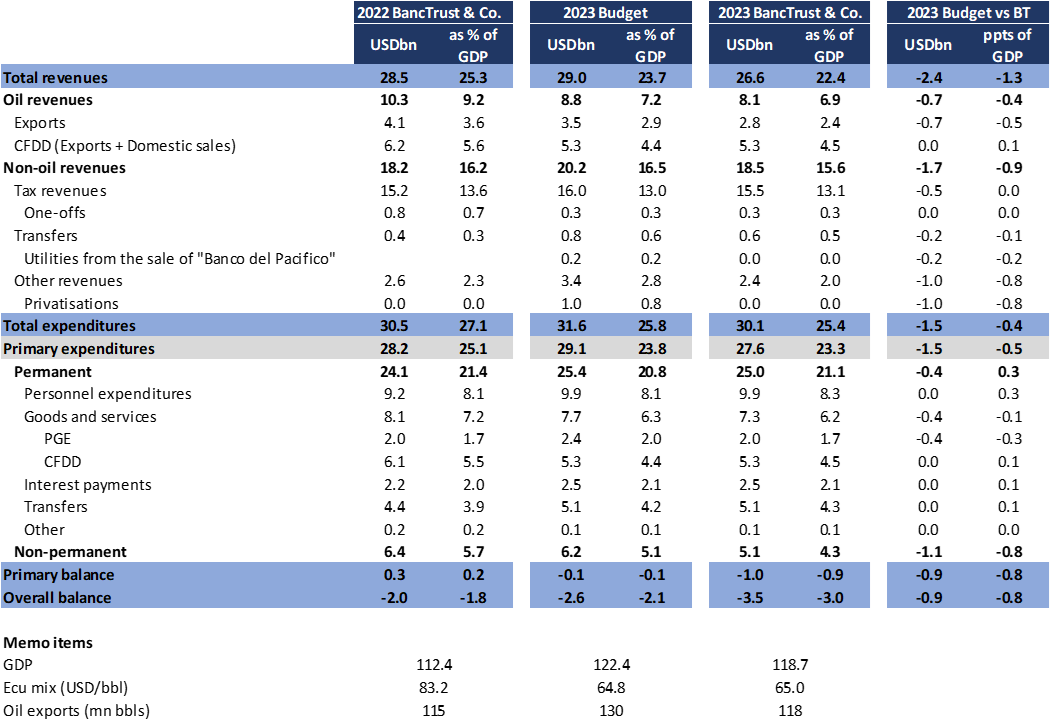 Source: BancTrust & Co. estimates based on the 2023 budget bill

*Note: We included CFDD items despite they were excluded from the PGE’s fiscal figures after Decree 548 issued on 30 August 2022, to ease the comparison against the fiscal statistics published until August 2022. The 2023 CFDD do not change the overall balance results.

Feasible yet challenging financing needs in 2023. The Finance Ministry estimates USD3.0bn in multilateral and bilateral disbursements, up from USD1.75bn in the July review of the EFF agreement. Part of these additional multilateral funds would come from the USD4.8bn loans the government planned to receive in 2022 that could be delayed into next year. On top of this, official estimates foresee a USD0.6bn global bond issuance in 2H 2023, which could include a guarantee from the IADB or DFC. We believe authorities plan to provide additional details on this new issuance after they conclude negotiations on a new IMF agreement in 1Q23, which could open the door to other multilateral loans in 2024, including the IMF’s Resilience and Sustainability Trust (in the range of USD0.7bn-1.0bn). To compensate for the higher deficit in 2023, we expect the government to place more local bonds to public entities, increase arrears to suppliers and tap its onshore deposits. Domestic sources indicated to us that the government has already settled part of the compensation due to Perenco, which we assumed of USD35mn, and that the remaining will be settled in 2023. 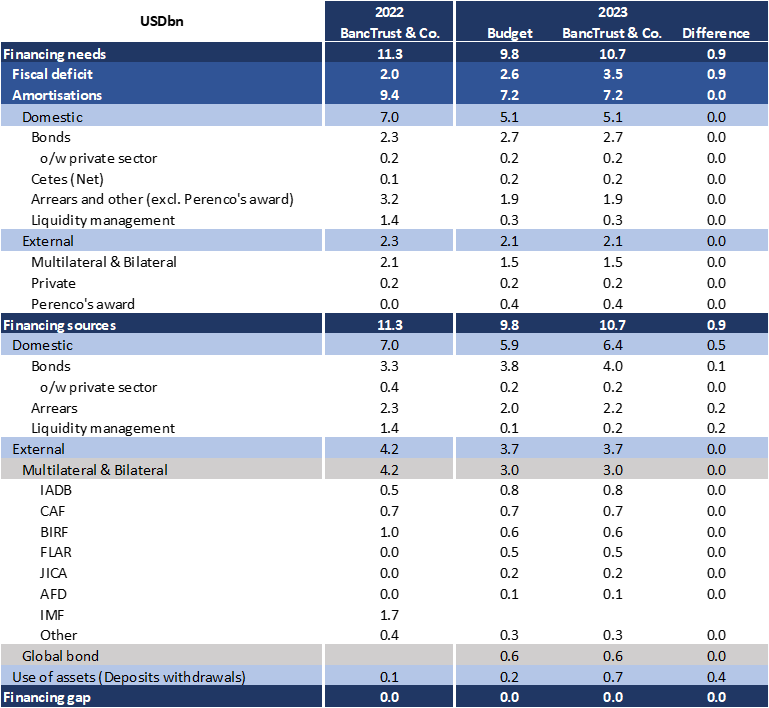 Source: BancTrust & Co. estimates based on 2023 budget bill and Ministry of Finance