Ecuador goes to the polls on Sunday and whatever happens, it will deliver a new president as incumbent Lenin Moreno is not standing after completing just one term. The vote, however, is the perennial choice between continuation of the current administration's orthodox approach (albeit one that has been somewhat bumpy) and a lurch to a more radical agenda in what is, politically, a deeply polarised nation. And it is close.

The election comes at a time of crisis. Real GDP is expected to have fallen 9.5% last year (IMF forecast), due to the impact of Covid, which has increased poverty and income inequality amid severe financing constraints in the context of dollarisation. Public debt has increased to 66% of GDP, up 20pts since 2018, three quarters of which is external debt, although last year's bond restructuring has resulted in a low debt service profile over the next five years (which should, in theory, imply little risk of default). The IMF approved the first review of the new US$6.5bn EFF (661% of quota) on 21 December leading to a disbursement of US$2bn. It brings total disbursements to US$4bn. The second review is scheduled in April, although it will be the forward looking commitment to the programme rather than the backward looking elements that will matter most.

The main candidates in the election are leftist Andres Arauz, who is supported by former Ecuadorian President Rafael Correa (who remains in exile), the conservative Guillermo Lasso of the Creo party and Yaku Perez, the indigenous Pachakutik party candidate, in a crowded field of 16 candidates overall.

It is a close race, and we think will likely to go to a second round where tactical voting will matter. According to the respected Cedatos poll on voting intentions, Arauz and Lasso are statistically tied (21.9% and 21.2%, respectively). Perez trailed in third place on 14.5%. In the face of low ratings and a fragmented field, it looks likely the election will head to a second round, although there is still scope for a surprise. An astonishing 48% of respondents in the Cedatos poll were undecided. Failure to win outright in the first round (50% or more, or more than 40% with a 10pts led over the second placed candidate) will see a second round run-off on 11 April. The new president will take office on 24 May.

While a close race, their policies couldn't be farther apart, with both Arauz and Perez likely to pursue more radical agendas compared to Lasso's more orthodox approach. Lasso, a former banker, favours free market policies and will seek to attract foreign investment and reduce the role of the state, seeking private sector participation in the oil and mining sectors. We expect he will continue with the IMF programme, although may seek some policy changes, and engage with the IFIs. Arauz offers free-spending leftist populism, backed by higher taxes on the rich. This includes a US$1bn state handout, after promising to give US$1,000 each to a million families within a week of taking office, although his plan to finance this from central bank deposits may be illegal; but he risks a backlash if he doesn't do it. He has already said he will break with the IMF and provided mixed messages on the debt. But his populist plans will threaten macro stability and risk triggering a new crisis. Perez pledges to renegotiate the debt (again) — eyeing longer maturities — and review mining contracts to ensure they meet environmental standards.

A second round, most likely between Arauz and Lasso, is hard to call. On the one hand, Lasso will appeal to the centrist vote, and to those tired of leftist failure and Correa's influence. He may also pick up Perez's vote (as he did in his 2017 election defeat). In a recent interview, Lasso said he would seek a unity government, with other parties in Congress including Pachakutik, although without Correa supporters. On the other, Arauz may attract the anti-market vote and benefit from populist campaign promises to boost social spending and end austerity.

Whoever wins will inherit a difficult situation, although financing constraints will surely be more binding if Arauz or Perez pursue a populist and heterodox policy agenda. They will find financing options are limited, and oil prices are unlikely to come to the rescue. Breaking with the IMF not only means the loss of IMF money (another US$2.5bn remains to be disbursed under the programme), but also donor and MDB financing that sits behind it. Bond yields will remain elevated so that Ecuador will not regain market access. Privatisation and FDI inflows are unlikely to help given their policy stance.

Moreover, they will find previously friendly governments cannot be relied on to provide generous financing support as they have in the past. Venezuela has long since been able to provide financing, as it did for Correa, while China has pulled back financing around the world. Moreno even tried to steer a course away from financial dependence on China, evidenced by the US$3.5bn loan agreement with the US DFC announced last month intended to help the country prepay its Chinese loans. This leaves deficit monetisation, which will put dollarisation at risk and ultimately threaten a BoP crisis and default. Such constraints may themselves force a more pragmatic approach, and a policy reversal, although that is not guaranteed and could take time, and it risks a popular backlash from their supporters.

Meanwhile, Lasso will find more room for manoeuvre if he continues with the IMF programme, along with other IFI money that brings. The US may also be willing to provide more money. And this should enable yields to come down, restoring some limited market access. However, Lasso's constraint will be political, in terms of being able to implement unpopular reforms and the speed at which he can do it.

Investors have been waiting for more visibility over the political outlook, although perhaps fearing the worst given Arauz's spending plans, and intention to scrap the IMF programme, and Perez's pledge to renegotiate the debt. Ecuador bonds were the worst performers in the EMBI last month due to higher political risks and associated risks of default, despite the easing in the debt service profile over the near-term following last year's restructuring. The 0.5% 2030s fell to a post-restructuring low of US$54 in late January, from an already low 64 at end-2020, although have since recovered to c60 (mid price basis as of cob 4 February on Bloomberg), with a mid-yield of 15.0%. The recent recovery in prices may reflect some optimism over Lasso's chances. 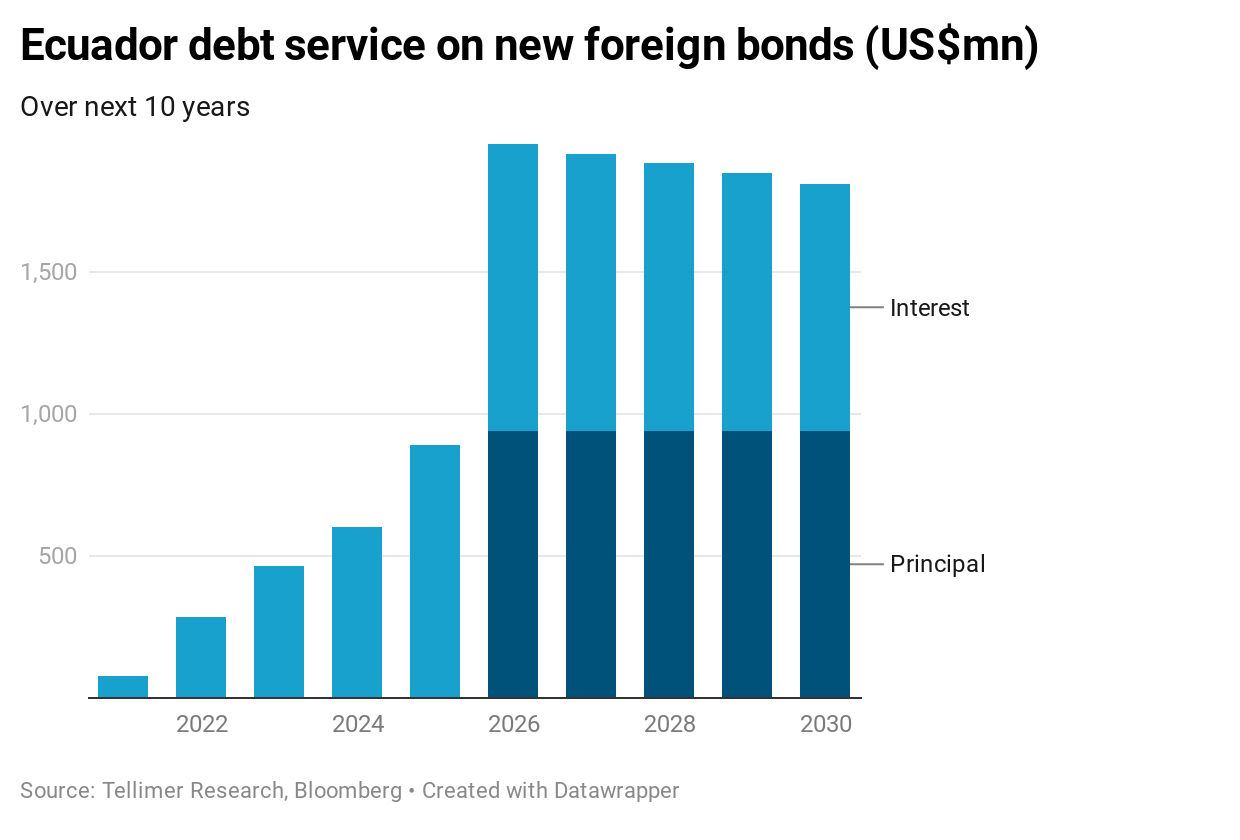 Bonds will react favourably if Lasso is elected, but fall — even from already low levels — under either Arauz or Perez (although Perez's chances are much less likely than Arauz or Lasso). Lasso is the market’s preferred candidate and he is more likely to stick to the IMF programme and policy orthodoxy, although implementation could still be challenge, which could cap upside (still with the bonds trading at such distressed levels, at c59 on the 0.5% 2030, implying a yield of 15%, even 12% would imply 10pts upside). But Lasso may face a tough challenge in a second round if the anti-market vote unites against him and he may face obstacles from the left in Congress if he does win.

Recall that Lasso lost to Moreno in the second round in the last election in 2017, although that wasn't such a bad thing in the end as Moreno split from Correa, and ended up trying to be more orthodox and market friendly than we expected. Conversely, markets will likely be concerned by a leftist victory if Arauz wins and the potential return, or influence, of Correa, under which willingness to implement the IMF reform programme may weaken. His attitude to paying the debt may also be in doubt. But with the bonds already so low, investors may question how low they can go, short of repudiation or moratorium. There is also potential for a positive surprise if Arauz, once in office, adopts a more pragmatic approach, recognising the already low debt service on the bonds after last year's restructuring means there is little to be gained from another default and realising that the country has few viable alternatives to sticking with the IMF programme, although this would imply a break from his supporter Correa, which seems unlikely. The chances of Arauz "doing a Moreno" seem slim.

But given we don't expect a first round victory on Sunday, the immediate market impact will depend on who gets through to the second round and the relative performance of the two leading candidates (the size of their vote and margin between them), as that will indicate their chances in the second round. A Lasso/Arauz run off is probably expected, as suggested by the polls, and as such could be neutral for the bonds come next week, although the market impact will depend on their respective results. Optimists may argue it will be good for the bonds if Lasso makes it to the second round, against anyone else, as it would bring some relief and investors will hope he can unify the centrist vote in the run-off. Pessimists, however, can argue the opposite, that it brings Arauz closer to office. What will matter, however, is the margin. If Lasso leads by a reasonable margin over Arauz, that may be too much for Arauz to overcome, which could be a bullish signal for the bonds. If Lasso is second, behind Arauz by a reasonable margin, it may be too much for Lasso to turn around, and negative for the bonds. Yet, in either case, there will still be a long way to go until the second round and nothing can be taken for granted. Uncertainty will remain. We suspect Lasso would be stronger against Perez than he would be against Arauz. The worst case for the bonds would be a Arauz/Perez run-off, but this seems unlikely.

We maintain our Hold on Ecuador dollar bonds, pending greater visibility over the election outcome following the first round on Sunday and uncertainty leading up to the second round in April. Investors could prefer the lower cash price longer maturity bonds (2035/2040) to protect against downside risks although they are less liquid. 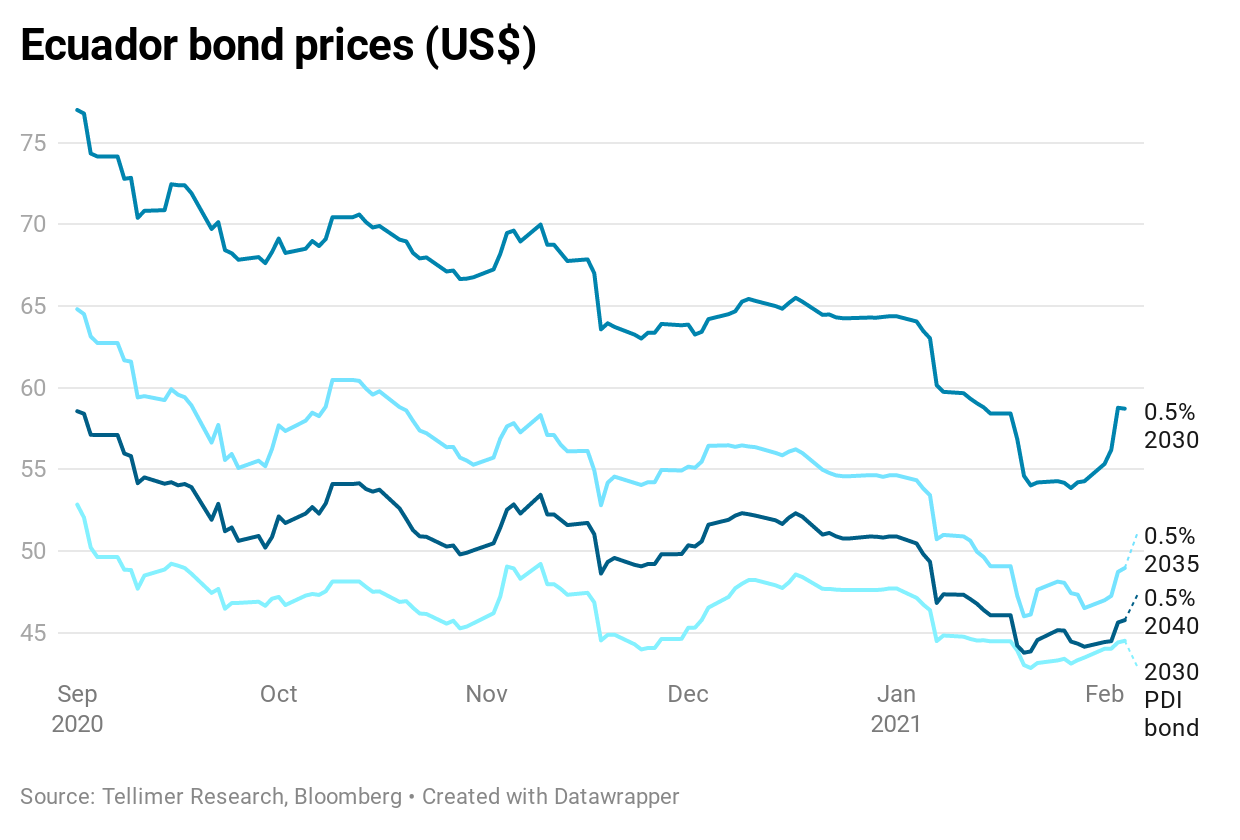