Ecuador's presidential election will go to a second round in April with the least market-friendly result appearing to emerge after the first round yesterday, rather than the run-off many had been expecting, according to preliminary results. Leftist candidate Andres Arauz won with 31.5% of the vote, although well short of the threshold needed to claim outright victory and despite an 11pt lead over this nearest rival (to avoid a run-off requires 50% of the vote, or 40% with a ten point margin over the nearest rival). In a potential surprise twist, indigenous leader Yaku Perez was second on 20.04%, with conservative Guillermo Lasso closely behind on 19.97% in third. An Arauz-Lasso run-off had been expected.

Final results by the National Electoral Council (CNE) are expected later this week. Initial reports do not suggest irregularities, but it remains to be seen how all sides react to the results and if the final result, whatever it may be, is accepted. The second round is due on 11 April.

The preliminary results, suggesting a surprise Arauz-Perez run-off, is negative for the investment outlook; the bonds had even staged a bit of a rally in recent weeks, presumably on optimism over Lasso's chances. Arauz has said he'll scrap the IMF programme and Perez will re-restructure the debt, although with the bonds already trading so low, some investors may see limited downside, especially on longer maturities with lower cash prices. Arauz will also likely be favourite in the second round, given the size of his lead, although a gentleman's agreement on vote sharing between Perez and Lasso could tip the balance in favour of Perez.

Investors will hope that the final results could still see Lasso make it to the second round, which may provide a relief rally. However, Arauz will also still likely be favourite in the second round against Lasso, given Arauz's performance in the first round, while the size of Lasso's deficit behind Arauz (whilst not unsurmountable) suggests it could be difficult for him to make it up, although vote sharing between Lasso and Perez could tip the balance in favour of Lasso.

Of course, a final factor that could play into second round voting behaviour in either scenario may be the impact — and possible return — of former president Correa, now in exile, who is supporting Arauz. An anti-Correa vote could unify the opposition candidate against Arauz.

We downgrade the bonds to Sell from Hold, with the 0.5% 2030s closing at US$63 on 5 February on Bloomberg (mid-price basis), 9pts above their low in late January. 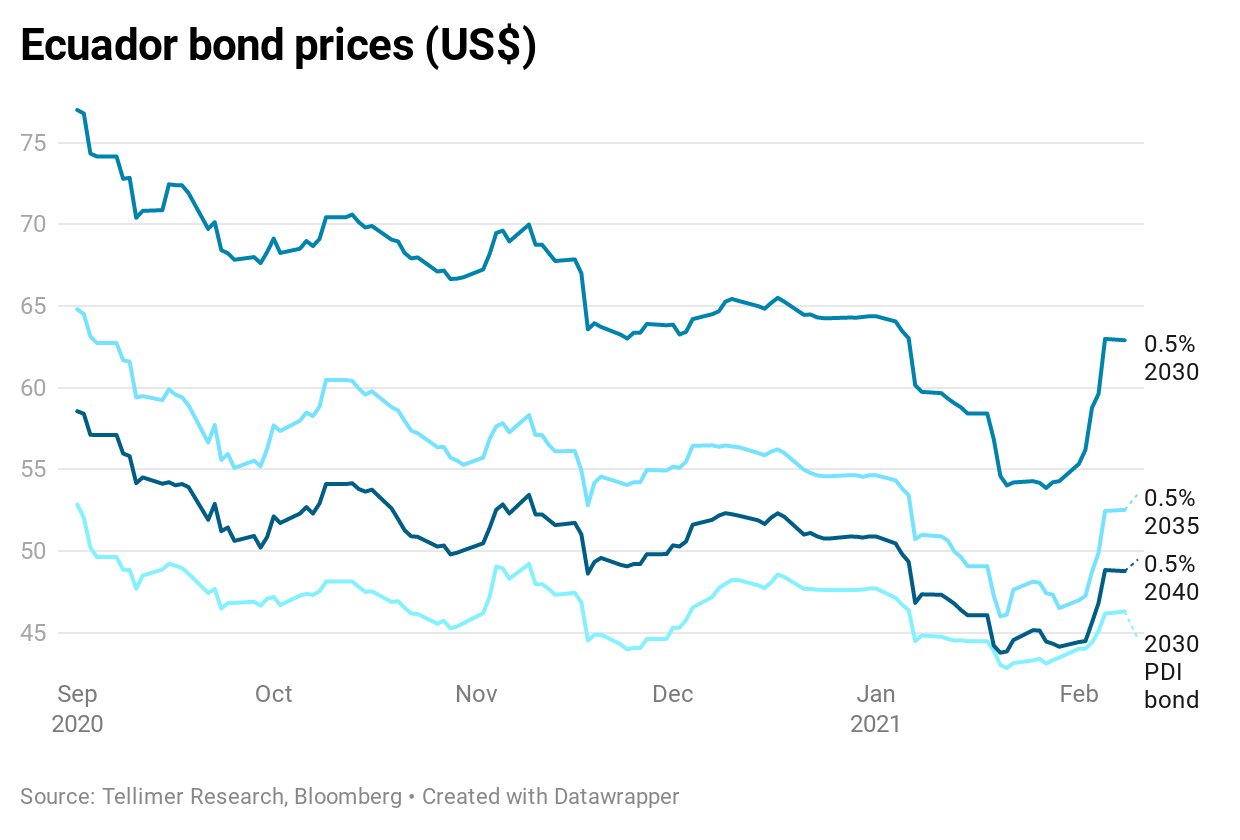