Ecuador's national electoral council (CNE) confirmed yesterday that conservative banker Guillermo Lasso came second in the first round of the country's presidential election vote on 7 February and will therefore progress to the second round. He will face the leading first round candidate, leftist Andres Arauz. The run-off will be held on 11 April. The winner will take office on 24 May.

The final results show Arauz on 32.72% of the vote, Lasso on 19.74% and indigenous candidate Yaku Perez in third on 19.39%. The result overturns the preliminary results, which had indigenous leader Yaku Perez in second place, marginally ahead of Lasso. That Lasso has made it to the second round is not a surprise, however, as he edged ahead of Perez as the result tally increased. The final result also followed a recount in several provinces, although the CNE denied Perez's petition for a more extensive recount on the grounds of fraud and voting manipulation. In the end, Perez trailed Lasso by just 32,600 votes.

Eyes will now be on what Perez and his supporters do. He said he will contest the results. A legal challenge is possible, but a series of marches and demonstrations also seem likely. A protest march that began last week, in anticipation of the results, is scheduled to arrive in Quito by tomorrow. Observers fear protests could escalate.

Still, assuming the result stands, Arauz looks likely to defeat Lasso in the run-off and thereby become Ecuador's next president. Lasso trails Arauz by a wide margin (13pts) and it is hard to see how he can make up this ground. The possibility of an electoral pact between Lasso and Perez to support whoever made the run-off, as per a previous gentleman's agreement, now seems remote after the recount saga when Perez may have expected Lasso's backing. Moreover the overall election results showed a clear shift to the left (or a more radical left) which will disadvantage Lasso.

Bonds have recovered some of their initial losses after the preliminary results pointed to a worse case scenario of an Arauz-Perez run-off as markets began to discount Lasso's passage to the second round and in the hope of more pragmatic Arauz emerging. Reports last week that Arauz met with investors and the IMF in the US may be evidence of a concerted attempt to assuage markets of his intentions, while Arauz will be hopeful he can renegotiate the IMF programme. But he has a long way to go to establish policy credibility given his own campaign rhetoric and the behind-the-scenes influence of former president, Rafael Correa. Markets may hope that the weak economic situation and large financing needs may be a disciplining factor and force more orthodox policies, the sooner the better, although such an approach, and reneging on campaign promises, risks undermining Arauz's own support and his popularity, which could threaten future governability.

We retain our Sell on Ecuador bonds, with the 0.5% 2030s closing at a price of US$59.0 on Friday on Bloomberg (yield 15.2%). We think the bonds will remain under pressure due to political and policy uncertainty. 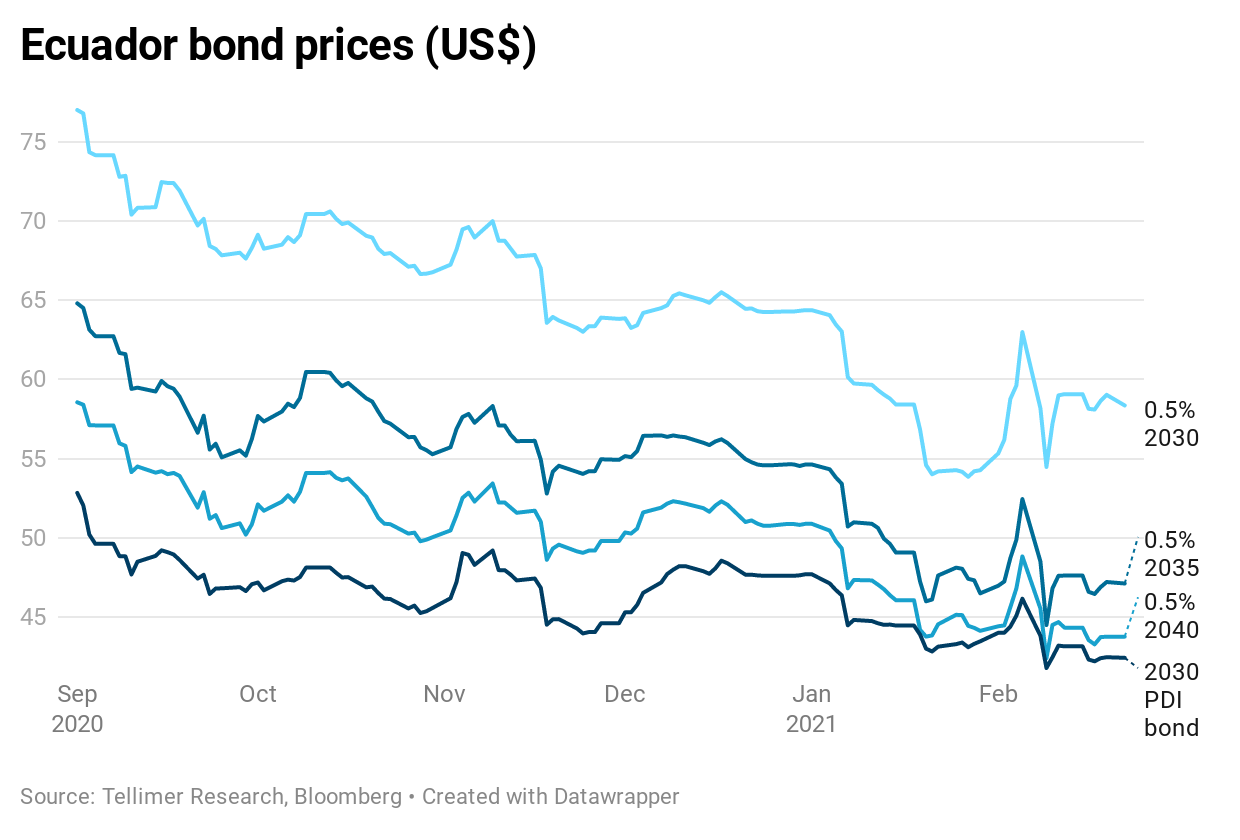