The headline event in East Africa this week is Uganda’s sovereign credit rating update by Moody’s on Friday.

At its previous meeting on 20 November 2020, Moody’s opted to leave Uganda’s B2 sovereign credit rating unchanged while affirming its outlook at stable. Moody’s said in its statement that the decision to affirm the rating balances Uganda's long-standing credit challenges, including low wealth levels, narrow economic base, and elevated susceptibility to event risk, as well as deteriorating fiscal and debt affordability metrics that have been further aggravated by the coronavirus shock, against credit supports including robust growth potential, gradually improving institutional capacity and support from the international community.

The global ratings agency said that the stable outlook meanwhile reflects credit risks being broadly balanced. Moody's expects that the track record of macroeconomic stability will be maintained amid the current challenging environment despite the anticipated fiscal deterioration induced by the pandemic and the electoral cycle. Moody’s added that it expects that additional forthcoming support from the international institutions will help to limit the erosion of debt affordability metrics and contain liquidity and external vulnerability risks. 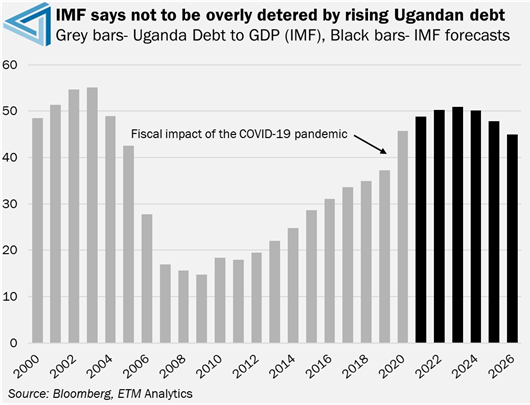 Heading into Friday’s meeting, while there has been a notable degradation in Uganda’s fiscal position this year due to the pandemic, the fiscal decline has been in line with similarly rated sovereigns. While our base case expectation is that Uganda will avoid any negative rating action on Friday, the risks are skewed in favour of a downgrade to the outlook.

On the economic front, the week kicked off with two data releases out of Kenya. Given that a large portion of foreign currency inflows to Kenya stems from overseas remittances, investors paid close attention to the April remittance report. Data published by the Central Bank of Kenya showed that remittances by Kenyans working overseas rose to $299.3mn in April from $208.2mn in the same month a year ago, marking an increase of 43.7% y/y. April marked the second straight month of remittance growth, with remittances increasing by 2.9% m/m in April. The rise in foreign remittances will be providing support for the Kenyan shilling (KES), which has staged a marked recovery against the USD since the start of Q2.

The other notable release of out Kenya on Monday was the latest money supply and private sector credit growth numbers. M3 money supply growth in Kenya decelerated for a fourth straight month in March. For context, money supply growth fell from 12.43% y/y in February to 10.10% y/y, its slowest pace of growth since June last year. Although money supply growth softened, it remains elevated compared to levels seen in March 2020. Private sector credit growth also fell in March, slowing from 9.67% y/y in February to 7.65% y/y, its lowest level in more than a year. With both monetary metrics decelerating, Kenya's monetary environment tightened, which should help offset rising inflation pressures emanating from heightened oil and food prices.

The Ugandan Coffee Development Authority said on Monday that coffee exports rose to 537,538 bags in April from 360,293 bags a year earlier, marking a 49% y/y increase. The sharp rise in coffee exports was largely due to robusta trees planted in recent years that started production. Favourable weather also assisted. The agency noted that robusta accounted for 86% of the shipments. A breakdown of the data showed that Italy accounted for 29% of Uganda’s coffee exports in April. Germany and India were also amongst the buyers of Ugandan coffee last month.

Keeping with Uganda, Chief Executive Officer of the Uganda National Oil Company, Proscovia Nabbanja, said that the refinery project could bring in $20bn of investment into the country’s oil and gas sector. Nabbanja added that the refinery would add $3.3bn to Uganda’s GDP. Nabbanja noted that technical progress on the 60,000bbl/d refinery project is 97% complete, while the environmental impact assessment is around 60% complete. The cost of the refinery is yet to be confirmed but is estimated at around $4bn, with UNOC’s share of that at about $480mn.

Preliminary data has shown that Japan's economy contracted in Q1 by more than expected, with a surprise drop in private investment and a steep build in inventories. The build-up of inventories adds to the downside risks for growth in Q2, especially now with the country's state of emergency being extended and its slow progress in vaccinating its population. There is also the risk that the upcoming Olympic games are cancelled. These would have been a major driver of a recovery for Japan, and a cancellation or postponement would lead to a double-dip recession.

Looking at the international calendar, the big event this week is the release of the Federal Reserve’s meeting minutes. While the April US CPI print sounded alarms about out-of-control inflation, the Federal Reserve continues to communicate that the recent episode of inflation is transitory. The FOMC meeting minutes are expected to underpin this notion. No material differences from the FOMC policy statement are expected. Although inflation is expected to rise to around 2.4% this year amid soaring commodity and food prices and as the economy reopens, the central bank expects inflation to return to its 2.0% goal next year. Even though inflation risks are tilted to the upside, there is a strong case that can be made for a moderate inflation outlook. Inflation expectations over the medium to long term remain relatively anchored. Moreover, the level of slack in the labour market remains high, and commodity prices could ease as supply chain bottlenecks are resolved. On balance, while near term inflation risks are elevated, we expect the Fed to stand by its looser for longer policy stance in the foreseeable future.

Stocks and other risk assets are climbing today, while the USD has dropped to a four-month low amid optimism over the reopening of the global economy. Market volatility is returning as investors bet on higher inflation as the global economic restart gathers some momentum. This volatility may persist through the near term but the broader outlook remains net bullish on risk assets, with global liquidity conditions set to remain flush as central banks will backstop the market in the event of any new adverse market shocks.

The trade-weighted dollar (DXY) has sustained a break below the psychologically 90.00 mark, which has acted as a strong level of support for the greenback. The sustained break below this level has offered emerging market currencies a helping hand.

Despite the sharp decline in the dollar and improvement in global sentiment, East African currencies have kicked off the new week on the back foot. The losses are being led by the Ethiopian birr (ETB), followed closely by the Kenyan shilling (KES). At the time of writing, the ETB and KES had lost 0.48% and 0.46%, respectively, against the USD. Underpinning the bearish bias in the ETB is the combination of heightened geopolitical, political and fiscal concerns. Since the start of Q2, the ETB has depreciated by almost 3.00% against the greenback. Looking ahead, with political risks expected to remain elevated ahead of the general election, which has been delayed yet again, the bearish bias in the ETB is expected to remain entrenched. 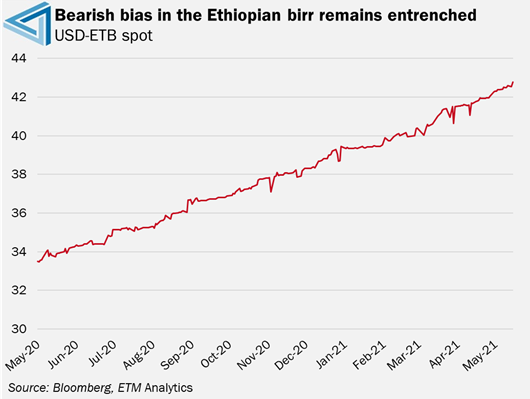 While the KES has extended its losing streak to a sixth consecutive session today, the broader bias in the KES remains bullish. Note that the sell-off comes on the back of a marked recovery in the KES in recent weeks, with the shilling strengthening to 106.56 on May 10, its strongest level since July 2020. For context, the KES has appreciated by 1.86% against the greenback on a quarter-to-date basis. The notable appreciation in the KES in Q2 has been underpinned by solid remittance flows, the country’s largest foreign currency earner.

The Rwandan franc (RWF), Ugandan shilling (UGX) and the Tanzanian shilling (TZS) are also trading in the red against the USD this week. While the UGX has come under some selling pressure this week, UGX bulls remain in command with the shilling appreciating by 3.50% on a quarter-to-date basis. Elevated commodity and agriculture prices and foreign aid flows are some of the factors supporting the rally in the UGX. 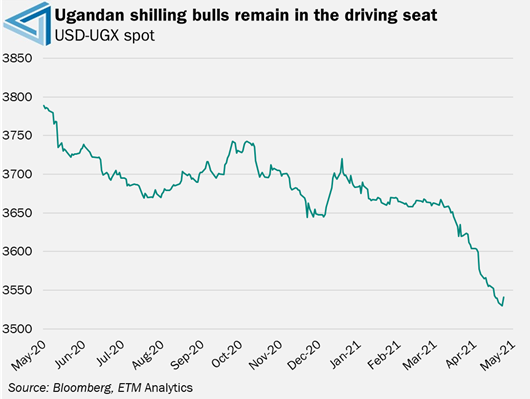