Given the global focus on inflation at the moment amid soaring commodity and food prices, which have spurred global reflation trade in recent months and a rise in US Treasury yields, investors paid added focus to the latest inflation reading out of Tanzania and Rwanda.

Headline inflation in Tanzania rose marginally in April, increasing from 3.2% y/y in March to 3.3% y/y. The increase in consumer prices last month was partly driven by the rise in the cost of food and non-food products. Although headline inflation has edged higher in recent months, CPI remains anchored well below the Bank of Tanzania’s 5.0% medium target, which has now been the case for more than 3 years. The benign inflation environment suggests that the central bank will be able to maintain its accommodative policy stance for an extended period of time. 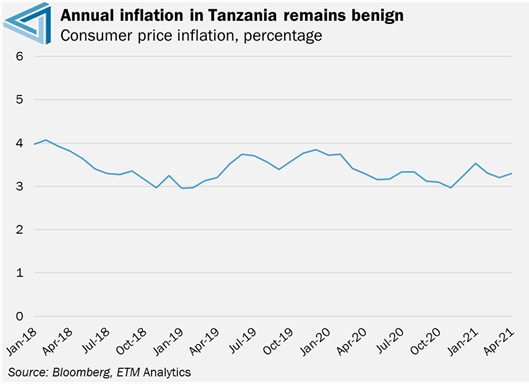 Annual inflation in Rwanda quickened for the second straight month in April. Specifically, consumer price inflation rose from 2.0% y/y in March to 2.4% y/y in April amid an increase in the cost of food and non-alcoholic beverages, alcoholic beverages and tobacco, clothing and footwear, education and transport. A decline in housing and utilities and miscellaneous goods and services prices partially offset this. Going forward, rising food prices and low base effects of fuel are likely to see annual inflation rise further. Weak domestic demand will however help offset some of the topside inflationary pressures. 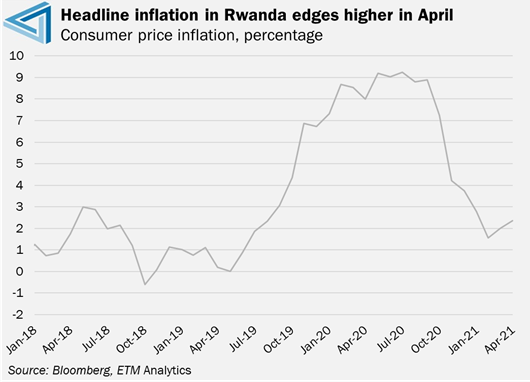 On the fiscal front, Uganda has reached out to the International Monetary Fund (IMF) for additional financing as the country continues to battle the prolonged COVID-19 pandemic. The IMF said last week that discussions with the Ugandan government over a new tranche of financing are progressing well. IMF spokesperson Gerry Rice said that Uganda requested a 3-year loan arrangement. The loan is expected to be around $900mn, which equates to roughly UGX 3.1trn. However, the actual amount is yet to be confirmed. Recall that Uganda borrowed $491.5mn under the Rapid Credit Facility in 2020.

While nothing has been confirmed, reports that Uganda is looking to enter into a new financing program with the IMF will undoubtedly raise some yellow flags amongst fiscal hawks. Note that Uganda’s debt pile surged last year as a result of the COVID-19 pandemic, which drove up spending and stifled revenue intake. For context, Uganda’s debt to GDP ratio rose from 38% at the end of 2019 to 47.2% at the end of last year. Recent data shows that Uganda’s debt to GDP ratio is heading past the 50% mark as lawmakers continue to approve new loans. Investors will look for signs of fiscal consolidation in the wake of the pandemic. Failure on the government’s part to return to a path of prudent fiscal policy will weigh on domestic sentiment going forward and ultimately come as a headwind for domestic assets.

Debt dynamics in Ethiopia have also been found their way back into the spotlight. Note that Ethiopia’s debt pile has been on a steep upward trajectory in recent years as the government ramped up spending both directly and through state-owned enterprises to bolster the country’s infrastructure and support economic growth. For context, Ethiopia’s public debt ballooned from $13.7bn in 2011 to $54.7mn in 2020, marking a fourfold increase in just under a decade. It is also worth pointing out that Ethiopia partook in the G20’s Debt Service Suspension Initiative (DSSI), which the World Bank estimates saved it $470mn in payments over the past year.

Despite the relief provided by the DSSI, Ethiopia’s fiscal outlook remains gloomy. Ethiopia also received access to the IMF’s Rapid Financing Instrument, which provided Ethiopia with $411mn in emergency assistance to bolster the healthcare system and ease the financial burden of the pandemic. On balance, while the government continues to pursue its reform agenda, the harsh impact of the virus and high funding needs suggests that the progress on the reform front is likely to be slow. Fiscal risks meanwhile remain tilted to the upside.

The world is holding on for tomorrow’s US CPI number. There has been debate across the globe as to whether or not inflation is embedded or a short-term phenomenon that is transitory. Both regional and offshore central banks have to date stated that the view is that inflation is transitory. Inflation in the US is expected leg higher in April, mainly reflecting the low base effects of 2020 as the COVID-19 outbreak sent the global economy into a freefall and commodity prices tanked. Consensus expectations suggest that inflation rose from 2.6% y/y in March to 3.6% y/y in April. If confirmed by the actual print, this will be the highest inflation reading in over a decade. While we caution investors not to look too deeply into the April inflation reading, it is worth noting that the US economy is heating up, and demand-side inflationary pressures are building.

America's top pipeline remains shut after a cyber-attack last week Friday. However, current guidance suggests it will reopen towards the end of the week or over the weekend. Although a temporary closure of this nature will not result in much disruption, should it persist for much longer, it might. This pipeline supplies approximately half of the gasoline used on the East coast, and shortages will quickly emerge if the pipeline does not resume transportation. Thereafter, a bump up in prices on the developing scarcity and a backlog that will need to be dealt with could emerge. Ultimately, the impact is expected to be temporary and the disruption in the broader scheme of things minimal.

Emerging market currencies remained on the front foot on Monday, with commodity currencies specifically on the rise, while the US dollar remained under pressure following last week’s official US employment report release. The greenback managed to stem losses during US trade, but failed to materially reverse losses with a hard dampener being put on the world’s number one currency at the end of last week. 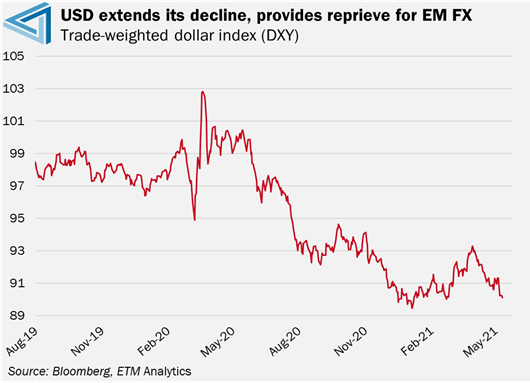 The USD has however returned to its losing ways today, with the trade-weighted dollar (DXY) extending its decline to a fourth consecutive session. At the time of writing, the DXY was trading just below the 90.10 mark and looked set to flirt with the 90.00 handle as the bias in the dollar remains intact.

Notwithstanding the favourable external conditions, the East African currency basket is mixed today. The gains on the session are being led by the Ugandan shilling (UGX), followed by the Rwandan franc (RWF). The Kenyan shilling (KES) is little changed on the session, while the Tanzanian shilling (TZS) and Ethiopian birr (ETB) are trading in negative territory against the USD.

Pulling back the lens, it is a slightly different picture. Looking at the performance of East Africa currencies since the start of Q2, the only two regional currencies to take advantage of the weaker dollar have been the UGX and the KES, which have racked in gains of 3.43% and 2.36%, respectively. The marked rally in commodity and horticulture prices have helped underpin the strong performance of both currencies. 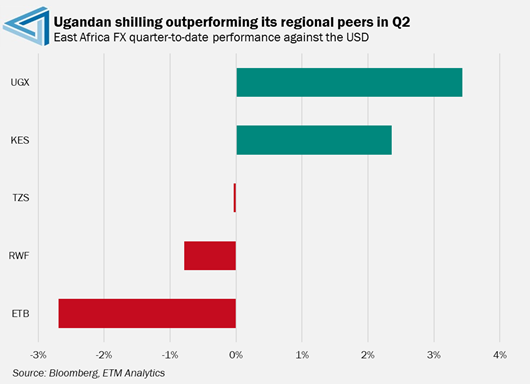 The consolidative bias in the USD-TZS remains intact with the pair hovering around the 2318 mark, where it has traded for most of the year. The USD-TZS is expected to remain within this range in the foreseeable future. The RWF and the ETB meanwhile are both trading in the red against the USD on a quarter-to-date basis with the former depreciating by -2.69% and the latter by -0.79%. Given the combination of heightened geopolitical tensions, political uncertainty and mounting fiscal risks, the bearish bias in the ETB is expected to persist in the sessions ahead. The sustained weakness in the USD should however provide some respite for the ETB.