Earlier this week, Dubai Islamic Bank (DIBUH) issued a notice to holders of the US$1bn 6.75% perpetual security. We understand that, as required by the documentation, the issuer was notifying investors that the language regarding write-downs at the point of non-viability had been 'switched on' having been previously dormant. We note that management most recently described the bank as 'well capitalised.'

On 27 January, Dubai Islamic Bank, referring to the DIBUH 6.75% Perp, disclosed that, 'the Financial Regulator has delivered written notification to DIB stating that the Effective Date is 15 January 2020. Accordingly, the provisions of Condition 11 are effective.' Below, we shed more light on what Condition 11 is. We note that these provisions are not unusual in banks' perpetual securities.

The bond documentation defines the 'Effective Date' as 'the date on which the Financial Regulator delivers a written notification to DIB, which has the effect that a Capital Event would arise if the provisions of Condition 11 (write-down at the Point of Non-Viability) are, at the relevant time, not effective.'

A 'Capital Event' is 'deemed to have occurred if DIB is notified in writing by the Financial Regulator to the effect that the face amount (or the amount that qualifies as regulatory capital, if some amount of the Certificates are held by DIB or whose purchase is funded by DIB) of the Certificates is excluded (in full or, to the extent not prohibited by relevant regulatory criteria for Tier 1 Capital, in part) from the consolidated Tier 1 Capital of DIB (save where such non-qualification is only as a result of any applicable limitation on the amount of such capital).'

Condition 11 in the documentation is titled 'Write-down at the Point of Non-Viability' and its provisions 'will apply will effect from (and including) the Effective Date.' Condition 11 states that if a non-viability event occurs, 'a Write-down will take place'. A 'non-viability event' is defined as the Financial Regulator giving written notice to DIB that it 'is or will become Non-Viable without (a) a Write-down or (b) a public sector injection of capital (or equivalent support).'

'Non viable' in the documentation means '(a) insolvent, bankrupt, unable to pay a material part of its obligations as they fall due or unable to carry on its business or (b) any other event or circumstance which is specified as constituting non-viability by the Financial Regulator or in applicable banking regulations.'

A 'write-down' means that holders' writes to Trust Assets 'shall automatically be deemed to be irrevocably and unconditionally written down in whole'. This also means the notes will be cancelled, and all rights of holders shall not be restored under any circumstances, irrespective of whether such amounts have become due and payable prior to the date of the Non-Viability Notice or the Non-Viability Event Write-down Date. We note that there do not appear to be any capital ratio triggers in the documentation for the DIBUH 6.75% Perp.

Latest results published for Dubai Islamic Bank are for 9M 19. Key figures suggest there should not be concerns about this issuer's fundamentals. Group net profit exceeded AED4bn in 9M 19, equating to a return on equity of 17.6%. The net profit margin was 3.16% and the cost/income ratio was under 28%. The non-performing financing ratio was 3.6% at the end of the period, and coverage exceeded 104%. At end-September 2019, the CET1 ratio was 13.1%, up from 12.4% at end-18, and notably higher than the minimum requirement of 10%. Management described the bank as 'very well capitalised.' We acknowledge that deeply subordinated instruments, which are included in Tier 1 capital may be expected to absorb losses on a going concern basis. However, the latest figures do not suggest that DIBUH is under any form of stress which would necessitate this.

Dubai Islamic Bank announced the completion of the Noor Bank (NOORBK) acquisition just last week. Following this, Fitch Ratings upgraded Noor Bank to A from A-. The mid single-A rating assigned to DIBUH was affirmed, with a stable outlook. Table 1 shows key figures for both lenders.

Figure 1 below shows spread differences between NOORBK and DIBUH bonds. After widening to over 90bps, the spread difference between the DIBUH 6.75% Perp and the NOORBK 6.25% Perp has narrowed to c20bps, which makes sense in the context of recent news. As the acquisition has now been completed, significant widening of NOORBK versus DIBUH may be a potential buying opportunity. 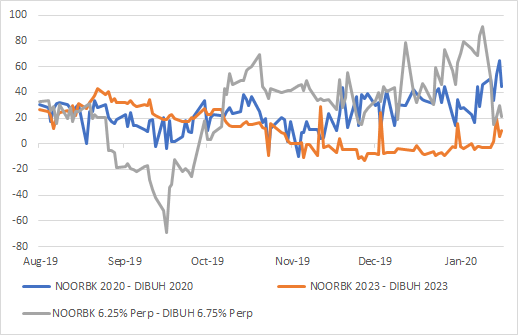