Some sovereign debt restructurings seem to be taking a very long time. This has led to concerns that the Common Framework – an initiative rolled out by the G20 as a formal framework for debt restructurings for low-income countries – is not working. However, restructurings outside the Common Framework are facing the same issues – namely, delays getting the official sector creditor committee to the table (mainly due to China), which hitherto wasn’t an issue in the standard Paris Club-type negotiations, and disagreements with private sector creditors (mainly due to lack of early engagement by the official sector and difficulties with sequencing).

Are future restructuring cases doomed to suffer from the same problems in terms of creditor coordination and fair treatment in burden sharing or is there hope that the process can be streamlined? Here, we look at what lessons can be drawn from recent experience, with the issue taking on additional significance amid fears of a rising wave of sovereign defaults.

Two years after the Common Framework (CF) was rolled out in November 2020 and 22 months after Chad became the first country to join it in January 2021, there seems little to show for it. Only two other countries have joined since (Ethiopia and Zambia) and only one has reached a restructuring agreement (Chad, just last week).

While the IMF has welcomed the development in Chad, World Bank President David Malpass said that “The World Bank remains deeply concerned about debt sustainability” due to the failure to provide an immediate reduction to the face value of Chad’s debt. Such a high-profile disagreement for the CF’s lone “success story” hardly bodes well.

In any case, Chad’s unique dynamics as a borrower (it has no bonded debt and over one-third of its external debt is resource-backed debt to commodity trader Glencore) means that it provides limited precedent for future CF restructurings. Meanwhile, Ethiopia has achieved little since entering the framework in February 2021 (partly due to a horrific conflict that has recently seen steps towards a resolution).

This means Zambia’s restructuring is likely to be a precedent-setter for future CF restructurings with bonded debt. But with Zambia still struggling to get the process over the line two years after defaulting and its bondholders pushing back against perceived flaws in the IMF’s Debt Sustainability Analysis (DSA), it hardly makes a strong case for the CF.

And although the IMF has made some recommendations on how to improve the CF, including expanding its scope beyond low-income countries, it is not clear if any of these have yet been implemented. Implementation may prove difficult and, in any case, any changes may come too late to help existing cases. Conversely, they may fall short of the deeper overhaul that some think is required.

Being outside the Common Framework isn’t any easier

Restructurings outside the Common Framework have been no less fraught, with Lebanon still stuck at square one due to an unwillingness and/or inability to implement any of the prior actions for its IMF programme, an ongoing dispute between the government and creditors in Suriname, and the restructuring in Sri Lanka shaping up to be a difficult one.

That said, Ecuador and Argentina’s bond restructurings in 2020 were both relatively quick affairs (c4-5 months) – perhaps as they were more traditional – although legal manoeuvres and complexities threatened to stymie them. 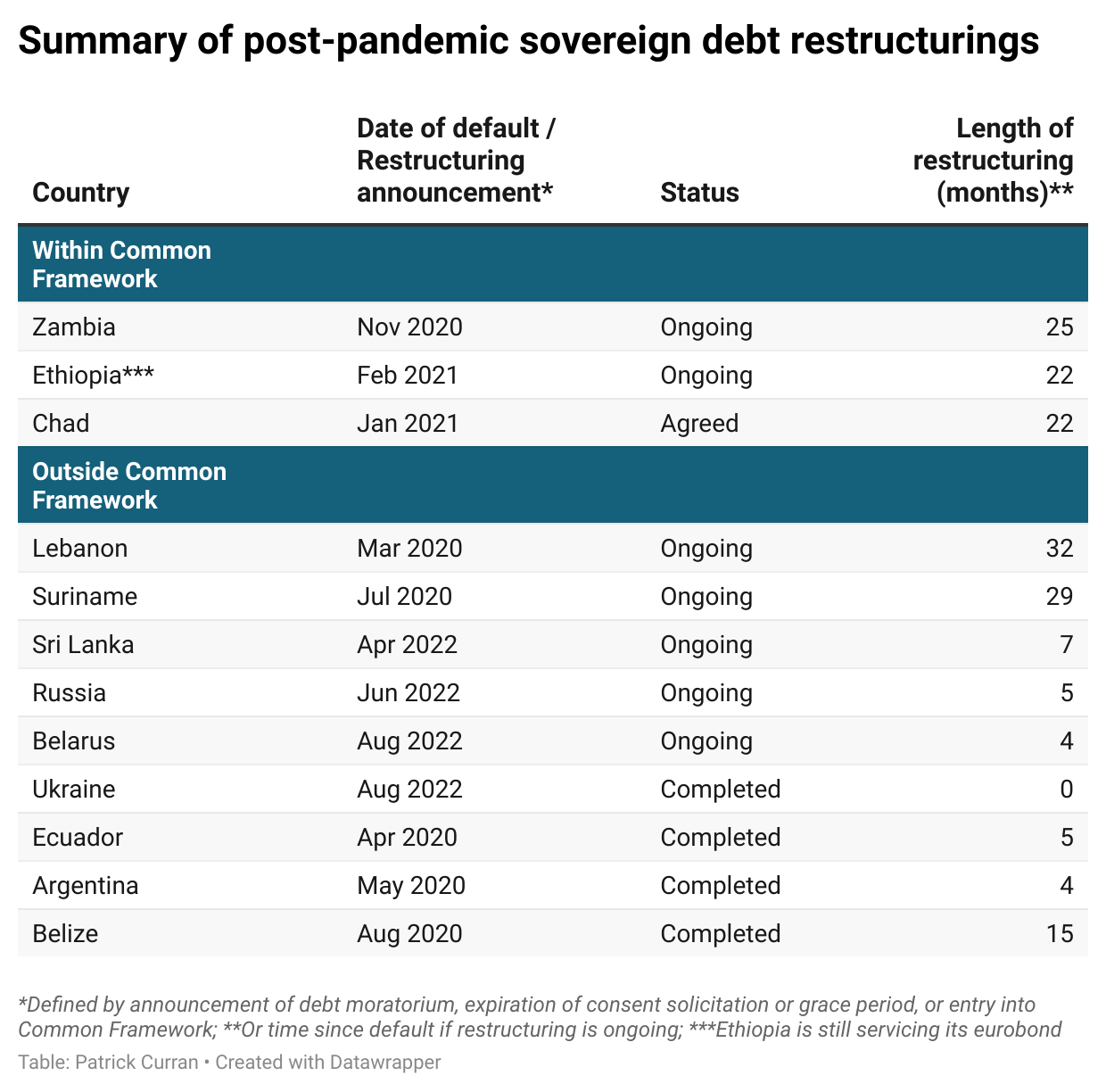 And in the event, the lesson from Argentina was not to let a quick deal, without getting the necessary policy commitment, lead to accepting a bad deal, which resulted in post-restructuring bond prices returning to distressed levels.

Meanwhile, Belize’s 2021 restructuring took a reasonably quick 15 months, but involved an idiosyncratic “debt-for-ocean” swap and, therefore, doesn’t provide much of a template for those countries that don’t satisfy the conditions for such a transaction.

Likewise, Ukraine's consent solicitation was accepted by bondholders by the time it expired in early August, just weeks after it was launched in late July, but this was driven by an obvious need for debt relief and immense international goodwill following Russia's invasion.

Ultimately, whether a country is restructuring within or outside of the CF, the process can only move forward if all creditors are willing to negotiate in good faith, transparently share information and provide comparable relief.

This wasn’t a major problem in the last major round of sovereign restructurings in the 1990s when the Paris Club held most of the debt, and best practice evolved over time, but with the rise of other commercial (non-bonded debt) and non-traditional bilateral creditors (like China, India, and others in the Middle East) there is now a much more diverse and complex mix of creditors, any one of whom can hold the process hostage by refusing to participate.

Sequencing and problems with coordination can now be a more significant cause of delays. In particular, the formation of an official sector creditor committee that includes bilateral creditors outside the Paris Club takes time, delaying the financing assurances needed by the IMF to approve a programme, while private creditors are forced to wait on the sidelines. This inevitably causes a degree of circularity, which can delay the process.

For example, it took just over a year after Zambia first defaulted to receive an IMF staff-level agreement plus 6.5 months for the official sector creditor committee to be formed and another 2.5 months before financing assurances were provided and IMF Board approval was secured. Likewise, in Ethiopia it took 7.5 months after entering the Common Framework for the official creditor committee to be formed and nearly 22 months into the process no financing assurances have been received (albeit due more recently to the conflict). In both cases, China’s reluctance to participate is understood to have driven the initial delays.

And, even after IMF Board approval is reached, there is still a risk of further delays if official sector financing assurances – which the IMF has seemingly adopted a flexible definition of in Zambia and Suriname to speed the process along – cannot be converted into actual debt relief or if private creditors disagree with the DSA and restructuring request that stems from it (which they are essentially presented as a fait accompli after it is hashed out by the IMF/World Bank in conjunction with the official sector creditor committee).

Indeed, this is what we have seen in Suriname, where China and India have yet to replicate the Paris Club’s treatment and private creditors have rejected the latest restructuring proposal (arguing that future resource revenues, which the IMF conservatively leaves out of the DSA, will improve Suriname’s debt servicing capacity). Likewise, Zambia’s private creditors have taken issue with the targets chosen by the IMF and the resulting degree of relief requested.

With an increasingly complex creditor landscape, there is no easy way to hasten restructurings. And given the pre-eminence of 'non-traditional' bilateral creditors (non-Paris Club creditors – largely China and, to a lesser extent, India – hold 66% of bilateral external debt in Sri Lanka, 83% in Zambia, and 84% in Suriname), the Paris Club is no longer in the driver’s seat and may not be able to exert the same influence over the process that they are accustomed to (with China essentially dictating the pace).

However, one way to reduce the risk of disagreements with private creditors is to involve them at an earlier stage in a joint rather than a separate/sequential restructuring process. Instead of presenting private creditors with a fully-baked restructuring, they should have input in the process before the IMF programme and DSA are finalized. This will ensure buy-in to the DSA process and avoid disagreements when/if the official sector portion of the restructuring is finally off the ground.

To sum up, recent restructurings seem to be moving more slowly than the 1.2-year average seen in recent years, especially for those countries where China is a major creditor. With more defaults likely in the coming years, the restructuring framework needs to be refined to speed up the process and deal with recurring issues, including possible resistance to the process from non-traditional bilateral creditors and a lack of coordination between official and private creditors.

Having said that, it would be naïve to think that the Common Framework would work perfectly the first time through, or that China would be able to replicate quickly what western creditors have refined over decades, so growing pains may have been inevitable and the process may move quicker as China moves up the learning curve (assuming delays have not simply been due to lack of willingness).

To that end, investors will be watching keenly what happens in Zambia, Sri Lanka and Suriname. Zambia is likely to set key precedents for the CF and Sri Lanka and Suriname for non-CF restructurings, but all three ultimately face the same hurdles. It is, therefore, all the more important to smooth out these wrinkles, or there is a risk that future restructurings will fall victim to the same drawn-out processes.