Dominican Republic’s bonds remain a valid play in “stagflation” scenario. The government submitted the 2023 budget draft to Congress on 3 October. The bill will be discussed in the next few weeks and is expected to be approved at the beginning of December with no major changes. While we deem the budget’s assumptions as realistic, fiscal consolidation efforts seem rather modest. The budget also seeks ample room to expand external indebtedness, although under current conditions we think that 2023 external debt issuance (EXD) is likely to stand well below the USD3.5bn pencilled in the budget draft. As a matter of fact, we have also marked down our 2022 gross EXD issuance forecast (see Macro and Strategy Update: To the tune of global factors, 05 September) to USD3.6bn from USD4.1bn previously, as we now award a very slim probability to a new USD0.5bn placement before year-end. We could see some value in bonds inasmuch as markets are not pricing in our view of lower supply. From a fundamental perspective, the outlook seems balanced. As opposed to timid progress on the fiscal front and some monetary policy inconsistencies, FDI will remain as the main source of current account funding. In this regard, relative to BB peers Guatemala and Paraguay, Dominican Republic spreads have been rather constant (Chart 1) and we do not see reasons to anticipate an imminent change in the statu quo. In To the tune of global factors, we underscored our preference for Dominican Republic’s long-dated notes in the scenario we dubbed “stagflation” (high-for-longer interest rates). However, the US Treasuries selloff exceeded our expectations, particularly in the belly and long-end of the curve. Some recovery of risk appetite and moderation in expectations of Fed tightening are driving a recovery of some risky credits, such as Argentina and Ecuador. Even in the absence of substantial relative spread narrowing, a further downward shift in the Treasuries curve should benefit low beta credits such as Dominican Republic, while they remain a valid hedge in the event of a renewed risk-off. 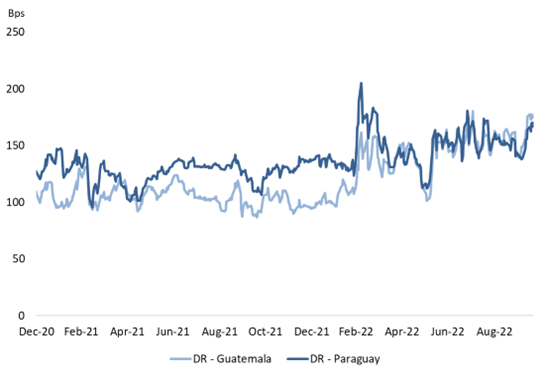 Reasonable fiscal estimates, but no structural progress before 2024 presidential elections. Policymakers have taken the reform agenda to a standstill due to the global shock and the 2023 budget bill suggests it will remain on the back burner. The budget predicts 2023 real GDP growth at 4.8%, slightly below potential (5%) and our forecast (4.9%). Inflation, in turn, would fall to 4.8% by December 2023, broadly in line with our 5.2% projection. At 3% of GDP (Table 1), the fiscal deficit targeted by the authorities also matches our home-brewed expectation of 3.1% of GDP  (see To the tune of global factors). This would represent a slight improvement relative to our 2022 estimates, featuring 3.6% overall and 0.4% of GDP primary deficits. The 3% of GDP deficit goal had been already built into the 2022 budget but was rapidly abandoned due to the impact of the commodities shock last March. In real terms, revenues would increase c1.2%y-o-y, below output growth, and primary expenditures would post a slight drop of 0.6%y-o-y. From our point of view, the pace of fiscal consolidation seems tepid bearing in mind that the aid package introduced this year to mitigate the inflationary shock amounted to c1.5% of GDP. The budget draft only removes less than half of these expenses, resulting in primary spending of 14.8% of GDP, 2.1ppt higher than the average of 2017-19. On top of this, the bill does not contemplate any progress on the tax reform or in the electric pact suspended last June amidst rising energy costs. True, this could be seen as a positive sign in the current backdrop, as it lowers political risks related to these reforms ahead of the 2024 presidential race. In any case, we reaffirm the idea that the government is unlikely to deliver any material improvement on the fiscal front before the elections. 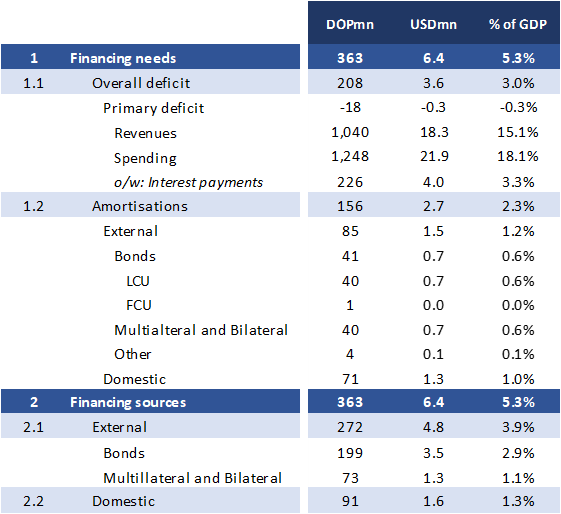 With financing needs of 5.3% of GDP, authorities estimate external and domestic funding for 3.9% and 1.3% of GDP, respectively. As in this year, funding would continue relying mostly on external bonded debt, even though external amortisations do not exceed DOP40bn, equivalent to USD0.7bn. In this context, gross bonded EXD issuance would amount to USD3.5bn, implying USD2.8bn in net placements or about 3x multilateral and domestic net financing. This could be explained by the Dominican Republic’s small domestic debt market and the impossibility of increasing exposure to IFIs after having tapped them heavily in recent years.

EXD issuance could be lower than official estimates… Despite the newly released official figures, we reiterate our USD2bn gross bonded EXD issuance forecast for 2023 that we introduced in To the tune of global factors. The proceeds would be used to partially finance the fiscal shortfall and the current account deficit given the absence of significant external maturities. Authorities had accumulated large savings during 2021 (Chart 2), which they have been using this year to avoid tapping debt markets amidst higher fiscal needs stemming from the external shock. With public sector deposits at c2.8% of GDP in August 2022, we think the government could continue to rely on domestic savings to avoid validating high borrowing costs. Indeed, returning to the average of public sector deposits of 2016-19 would imply a drop equivalent to 1.6% of GDP or USD1.6bn, an amount that would more than compensate for lower EXD placements vis à vis the official issuance goal. 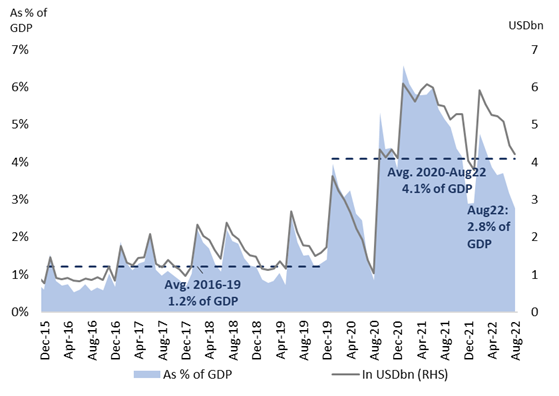 … Although dollar galore is set to persist. We expect the 2023 current account deficit to narrow to 2.2% of GDP from 3.5% this year. Lower commodity prices, especially in the energy market, would weigh positively on external accounts, as well as a slower but steady improvement in tourism. True, weaker global growth would affect external demand and thus exports from the Dominican Republic. Nevertheless, we look to robust FDI to continue financing the external gap fully in 2023. Hence, the dollar glut that has exerted downward pressure on the USD-DOP throughout 2022 will run into next year. Monetary policy is therefore at a crossroads. Core inflation remains elevated (6.2% a.r. in September) and would command further rate hikes. However, appreciation pressures could hold back additional monetary tightening given the policymakers’ evident fear of floating. We see downward risks on our 2022 year-end monetary policy rate forecast of 9.75%, with rates currently at 8.25%.