China's Future Investment Watch series - Do Not Expect the Next Tencent or Alibaba to Come from China. 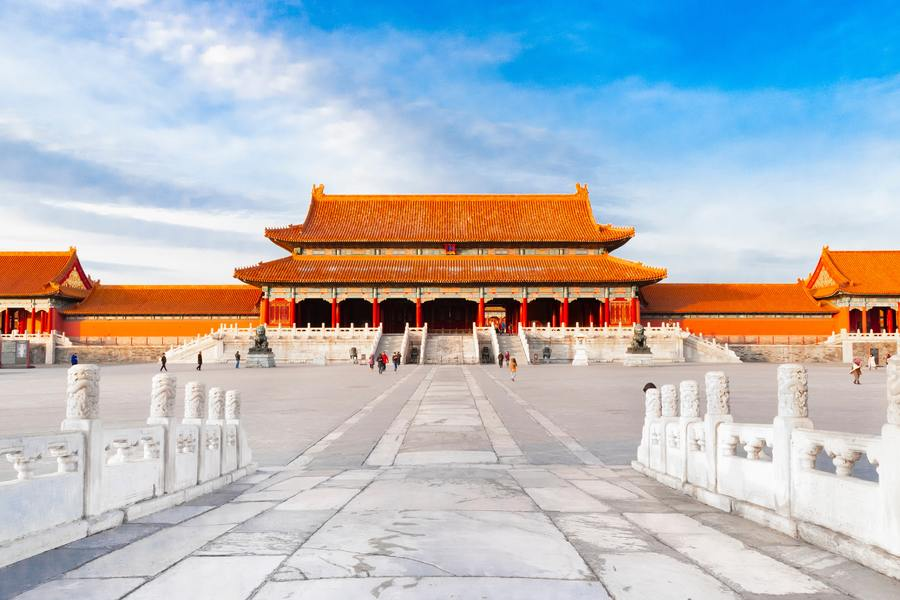 It is said that one of the most regrettable decisions of Richard Li, PCCW chairman and son of Li Ka-Shing, was not investing in Tencent in 2000. Indeed, the Tencent-led 2C Internet giants, such as Alibaba, Baidu, DiDi, Meituan, and ByteDance, experienced a golden age from 2000 to 2014 and have an increasing influence in China, resembling FAANG (Facebook, Apple, Amazon, Netflix, and Google) in the United States. Some of the companies are now deeply rooted in Chinese life and help their investors make impressive gains. However, we believe that the investment logic of China has changed currently, and investors who plan to invest in China now or in the future should know the new logic behind recent events. We will display the changes in three aspects: political, economic, and people. 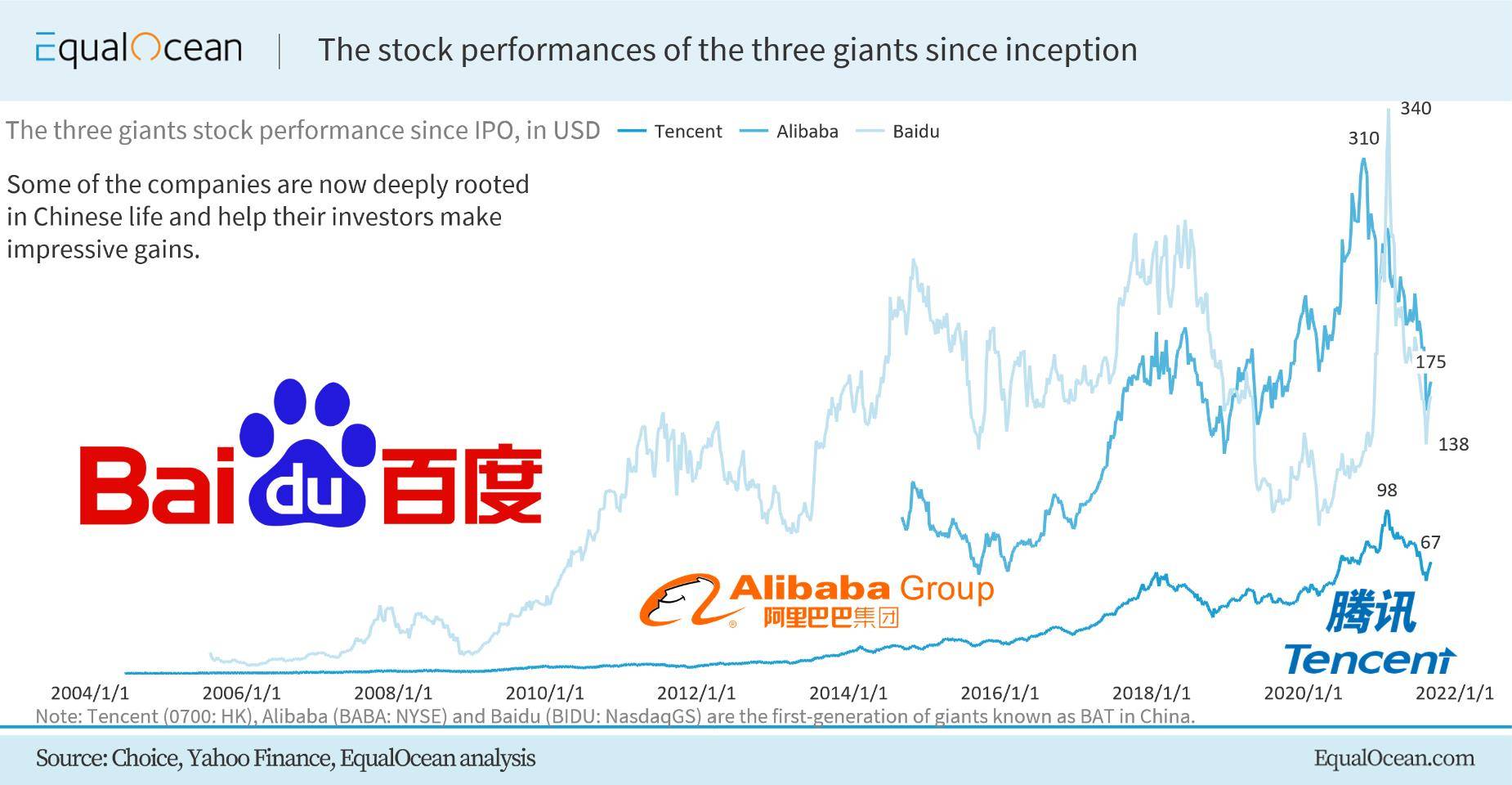 First of all, we think the Chinese political environment has changed, especially in the past four years. Since the advent of 'Modern Times' in China, the Chinese have been adhering to a rising belief in 'Industry Salvation' – or the transformation of the whole country through industrial advances. Therefore, the Chinese government has been focusing on supporting the development of the traditional industrial business in the first decade of the 21st century to raise the country's manufacturing power and quickly improve its international competitiveness. At the same time, the Chinese government has been looking upon the Internet as a relatively inefficient investment environment, and Internet companies receive little support officially. Unable to receive domestic help, Internet companies have to turn to VC/PE in developed countries or even go for cross-border IPOs. Owing to the capital support from VC/PE in the developed market and the neglect of policies, the Internet industry has experienced a long period of 'barbaric' growth. Many companies have begun to stand out during this time, such as the well-known Alibaba, Baidu, and Tencent.

Finally, from about 2013 to 2014, the Chinese government realized the advent of the digital age and the importance of the Internet. However, as the Internet is an emerging industry for China and the development path of other countries is difficult to learn from, Chinese regulators have been paying attention to finding a balance between growth and structural optimization. Between 2013 to 2017, we believe that China paid more attention to the growth side of the Internet instead of setting restrictions to optimize the structure of the Internet industry. Many policies can testify to the point; in November 2014, during the First World Internet Conference, the Chinese premier, Keqiang Li, pointed out that the Internet is a new tool for the Mass Entrepreneurship and Innovation national strategy; in June 2015, the China Ministry of Industry and Information Technology (MIIT) issued a notice to lift foreign ownership restrictions in the e-commerce sector, while the China State Council issued guidance to encourage the development of cross-border e-commerce companies simultaneously. 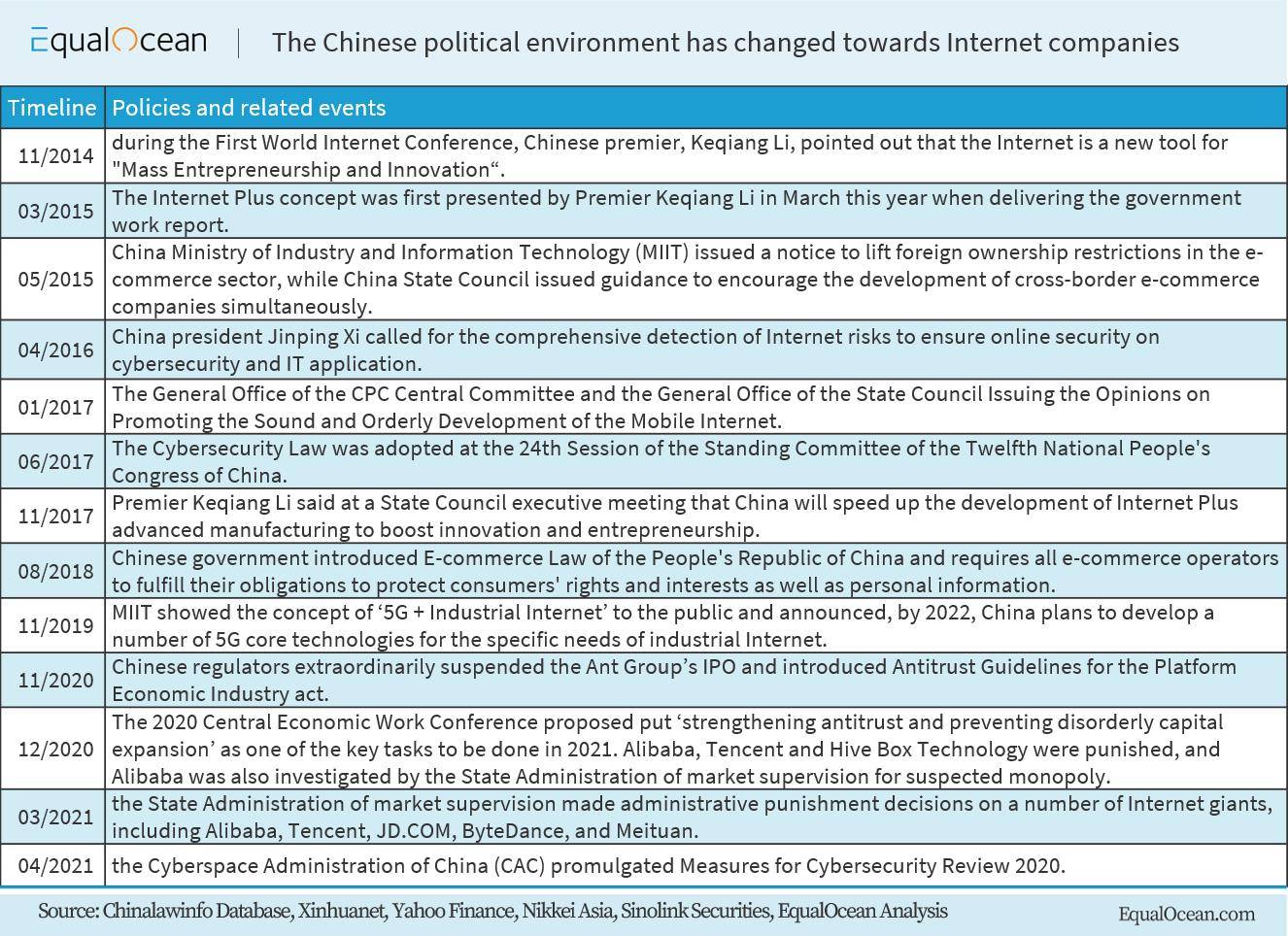 However, since late 2017, the Chinese government has changed its focus to acting as the Internet's support in terms of industrial (and technology) and legal compliance for Internet-related companies (the structural optimization side). Since November 2017, the policy document issuance has evolved to combine Internet concepts with general industrial and put forward concepts of 'Internet plus Advanced Manufacturing and Industrial Internet'; these were still being emphasized in official documents up to 2021. At the same time, the 2020 Central Economic Work Conference proposed 'strengthening antitrust and preventing disorderly capital expansion' as one of the key tasks in 2021. In December 2020, Alibaba, Tencent, and Hive Box Technology were punished, and the State Administration of market supervision also investigated Alibaba for creating a suspected monopoly. In March 2021, the State Administration of market supervision made administrative punishment decisions targeting many Internet giants, including Alibaba, Tencent, JD.COM, ByteDance, and Meituan.

In general, the emergence of large Internet companies such as Tencent and Alibaba was largely due to the neglect and laissez-faire of national policies from 2000 to 2013. More importantly, the neglect of policies has led to chaos in the industry, such as unfair competition, 996 culture, and P2P lending scams. With the endless emergence of reform policies, Internet companies have gradually recovered from the 'barbaric' growth stage to arrive at a relatively normal growth stage.

GDP growth driver becoming ineffective in the next decade

Second, the growth pattern of Chinese GDP in the past two decades is also a driver. In economics, GDP is defined as: GDP = Consumption + Investment + Government Spending + Net Exports (GDP = C + I + G + NX). After China joined the WTO in 2001, for a long time, China's economic growth mainly depended on official investment and trade surplus. Relying on the whole industrial chain system...