We upgrade the DNONO 23s and 24s to Buy and reiterate Hold on the DNONO 20s. Details of DNO’s response to the oil price shock disclosed with the Q1 results give us confidence that the company has sufficient operating and financial flexibility to adjust to the changing environment and is well funded for more than 12 months. By end-Q1, DNO had accumulated enough cash to repay its 2020 debt maturities and sufficient reserves to shield its operating units from potential liquidity gaps. We estimate the Kurdistan and North Sea operations could be self-funding in April-December 2020 if Brent stays at cUS$30/b. The DNONO 23s and 24s lagged behind the recovery of Kurdistan E&P bonds, but we expect them to catch up with peers and upgrade them to Buy.

Kurdistan operations fully funded in 2020. In response to the severe price shock, DNO suspended all discretionary and uncommitted capex, and released four drilling rigs, keeping only one workover rig on site. According to a company presentation, its total 2020 budget for Kurdistan, including opex, capex and exploration expense, is planned at cUS$175mn in 2020, of which cUS$85mn has already been spent. Assuming the KRG follows the new payment schedule and settles invoices monthly, we estimate that DNO’s opex and capex in the nine months from April to December 2020 can be fully funded with cUS$186mn of oil revenues, with a substantial safety margin. DNO operates the mature Tawke field, with rapidly declining production, and the new Peshkabir field, which is likely to deliver more sustainable volumes. Lower capex will most likely accelerate the production decline at Tawke field and DNO’s Kurdistan operations, particularly towards the end of 2020 and in 2021.

North Sea operations fully funded in 2020. According to the presentation, the North Sea operations budget is cUS$345mn, of which cUS$100mn was spent in Q1. If Brent stays at US$30/b until year-end, proceeds from oil sales could fund cUS$115mn of remaining opex, capex, exploration and abandonment expenses, with the rest covered by cUS$130mn of expected tax refunds. High-cost North Sea barrels have several advantages over those from Kurdistan: 1) severe payment delays are highly unlikely; 2) the beneficial tax regime in Norway enables the company to carry on with exploration during periods of low oil prices (the government refunds c75% of expenses the year after they were incurred); and 3) business risks in Norway are lower than in Iraq, which could reduce costs of funding and help achieve higher equity valuations over time. North Sea sales contributed 35% to consolidated revenue in Q1.

Sufficient liquidity to repay 2020 debt maturities. DNO had US$1.2bn of debt in Q1 (Table 1 on page 2). With Kurdistan and North Sea operations self-funding in the remainder of the year before interest costs, cash reserves could cover the repayment of US$214mn short-term debt, including a US$140mn bond maturity, and cUS$80mn interest expenses (see chart). The next significant maturity is US$400mn of bonds in 2023. In Q1, the cash position increased to US$543mn as the KRG settled its August-September 2019 invoices, followed by another payment for October 2019 oil sales after the reporting date. The price slump led to the KRG postponing payment of the US$233mn November 2019-February 2020 export invoices at least until year-end and, in the case of DNO, also suspending override payments starting from March. DNO’s liquidity has been further strengthened by cUS$131mn (up to US$530m with accordion options) available under the revolving exploration financing facility (EFF) and reserve-based lending (RBL) facility as of 31 March 2020. 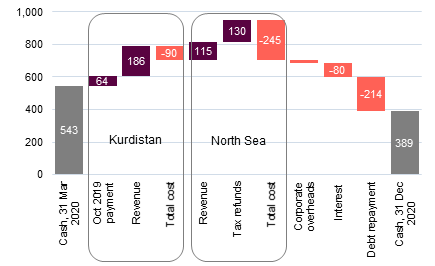