The company's 2020 revenue was US$104mn and net profit US$28mn. Key competitive advantages include its high-quality client base, state-of-the art technology, and client-centric culture. Key risks include the firm’s high dependence on Latin America (c90% of revenues) and a few important clients (its 10 largest accounts generate c60% of the top line), but diversification should improve as the business grows.

Founded in 2016, dLocal, is a Uruguay-based digital payments infrastructure company. Through one single electronic interface, the firm helps over 330 merchants connect to almost 2 billion emerging market consumers and thousands of suppliers in 29 countries across 600+ different payments methods. 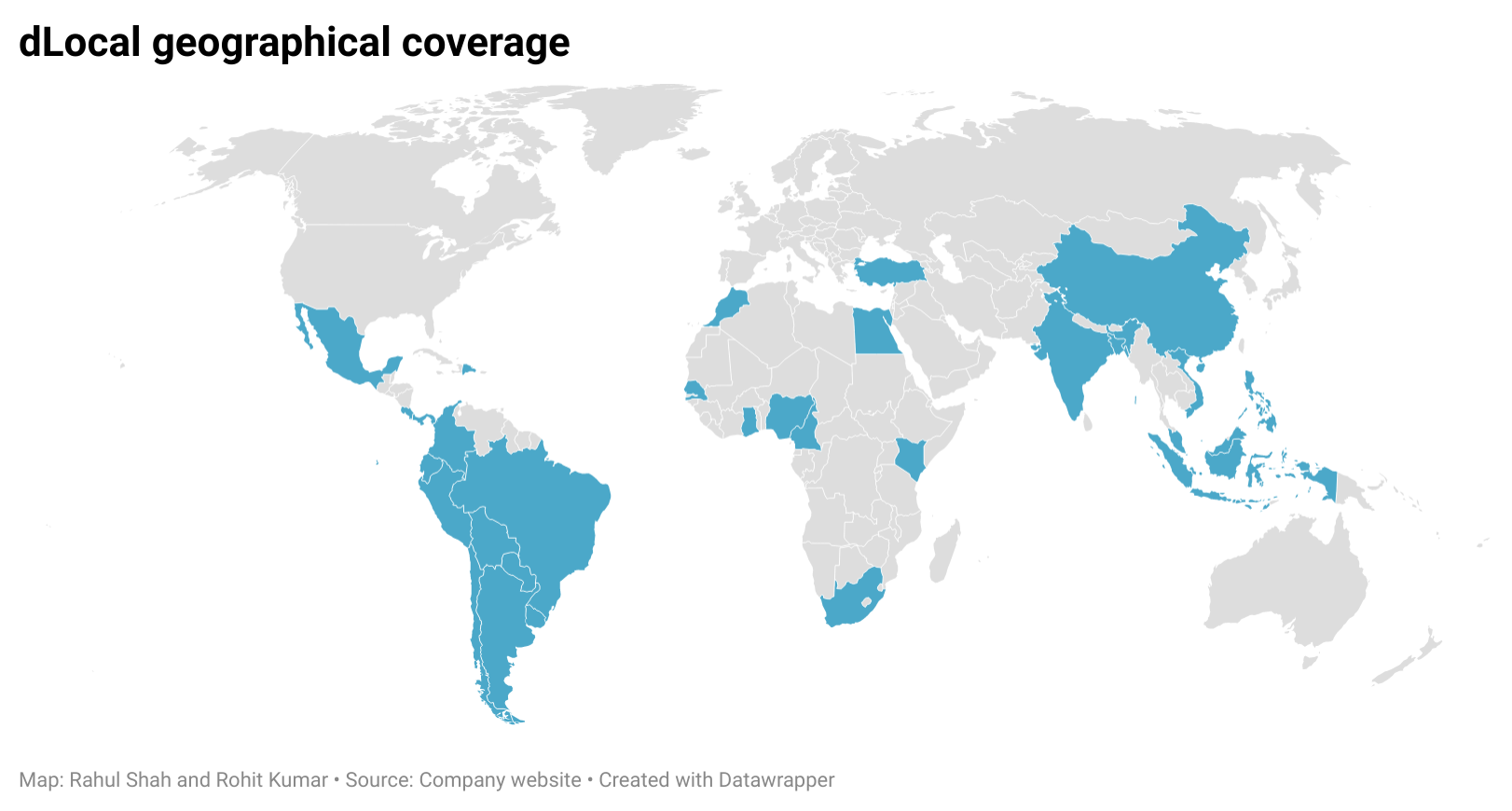 In addition to improved convenience, merchants on dLocal’s platform benefit from better conversion rates and lower fraud losses. The firm also helps these merchants scale their businesses across dLocal’s markets of operation. 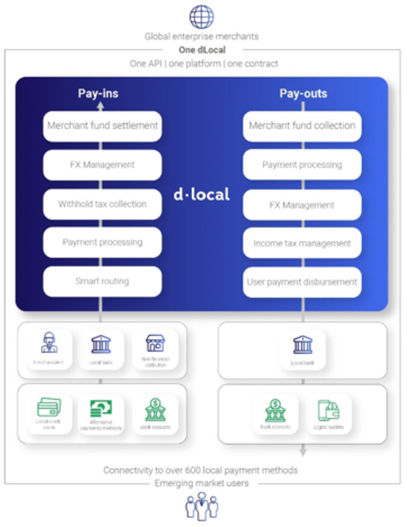 dLocal may be able to sustain high levels of growth for a prolonged period. It is positioned in the fast-developing digital payments infrastructure space. The firm’s existing market share is low. And it is exposed to the superior growth potential of emerging versus developed markets.

AMI estimates that in dLocal's countries of operation, there were US$1.2tn e-Commerce transactions in 2020 (split between US$430mn of pay-in transactions and US$810mn pay-out transactions), giving dLocal less than 2% market share. 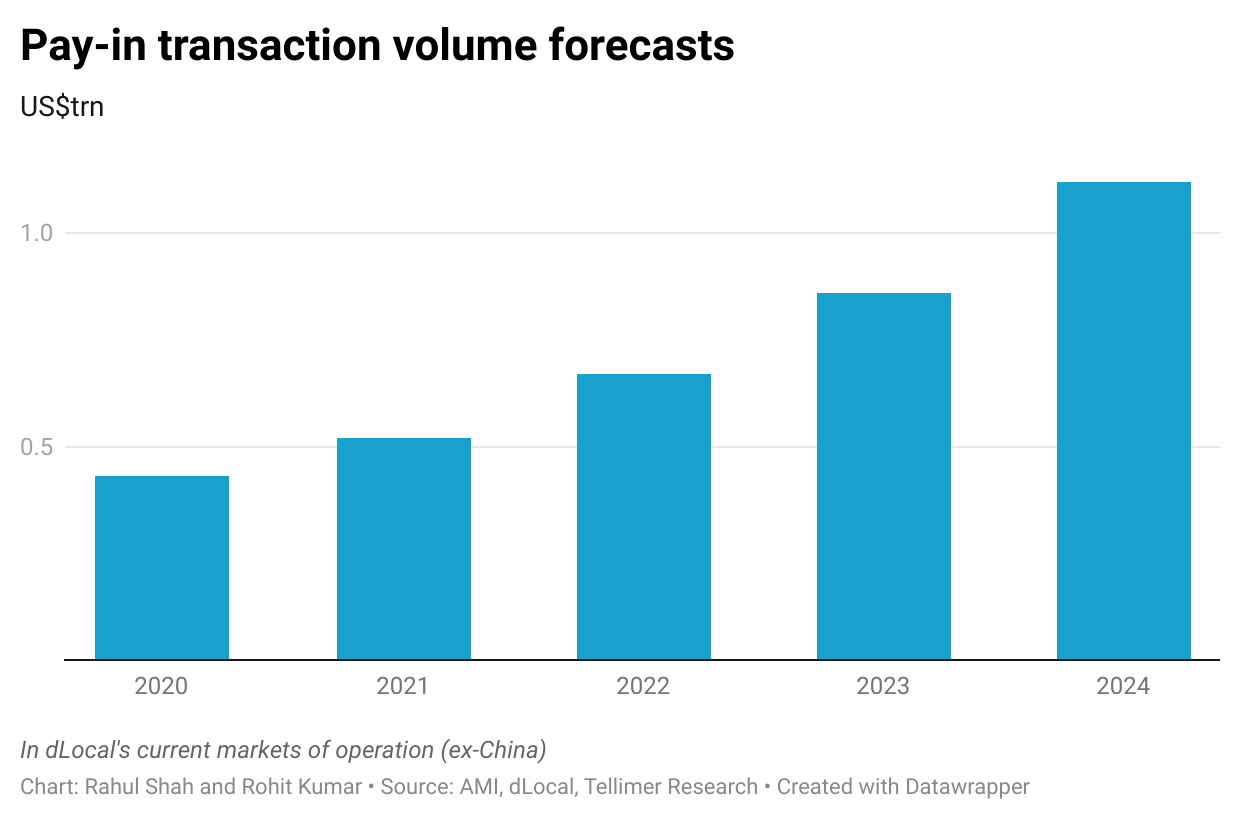 The main drivers of this growth include:

A high-quality and growing client base

dLocal currently partners with over 330 merchants, including leading global enterprises like Amazon, Didi, Kuaishou, Mailchimp, Microsoft, Spotify, Wikimedia and Wix. On average, for merchants with at least US$6mn annual transaction volume on dLocal’s platform, each of these merchants uses dLocal’s interface in around six countries and for 44 payments methods.

By positioning itself in a fast-growing sector in rapidly developing geographies, and by attracting a high quality roster of clients, dLocal has delivered positive financial performance over the past few years. 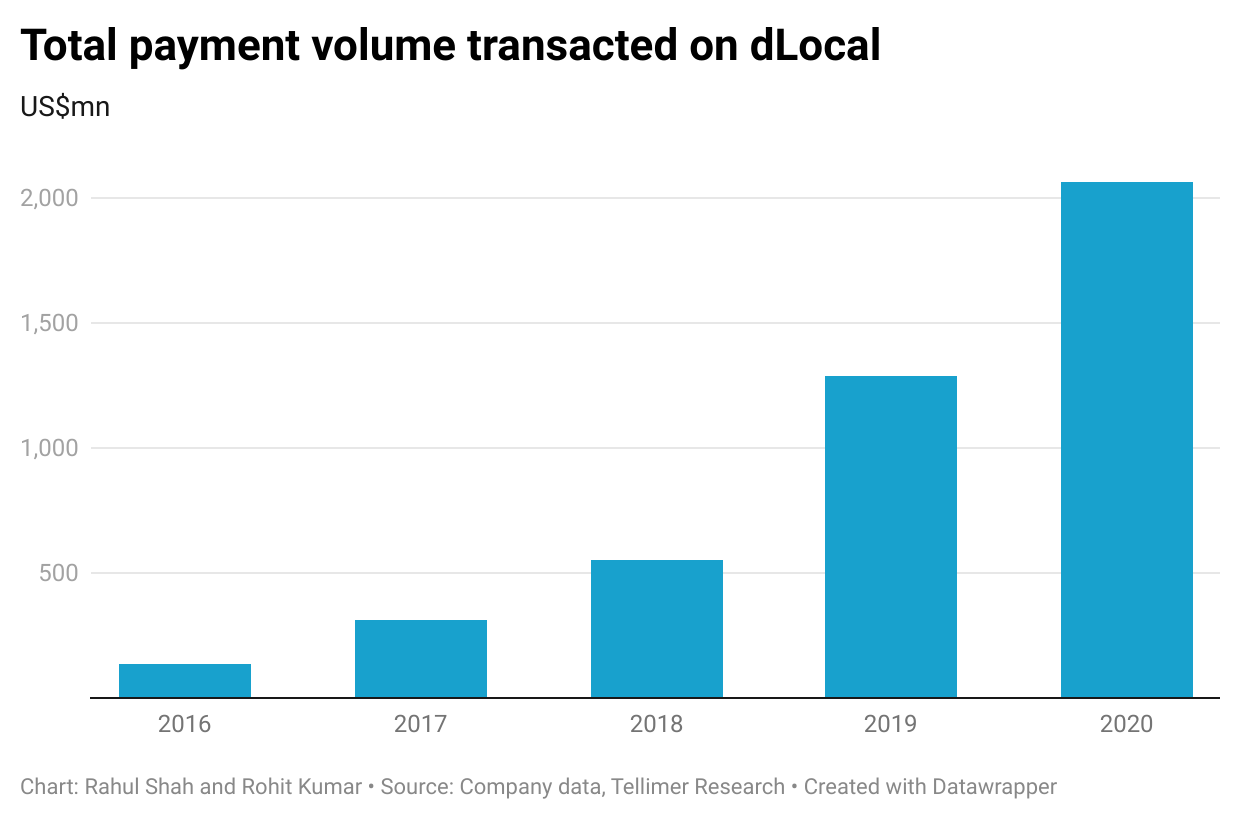 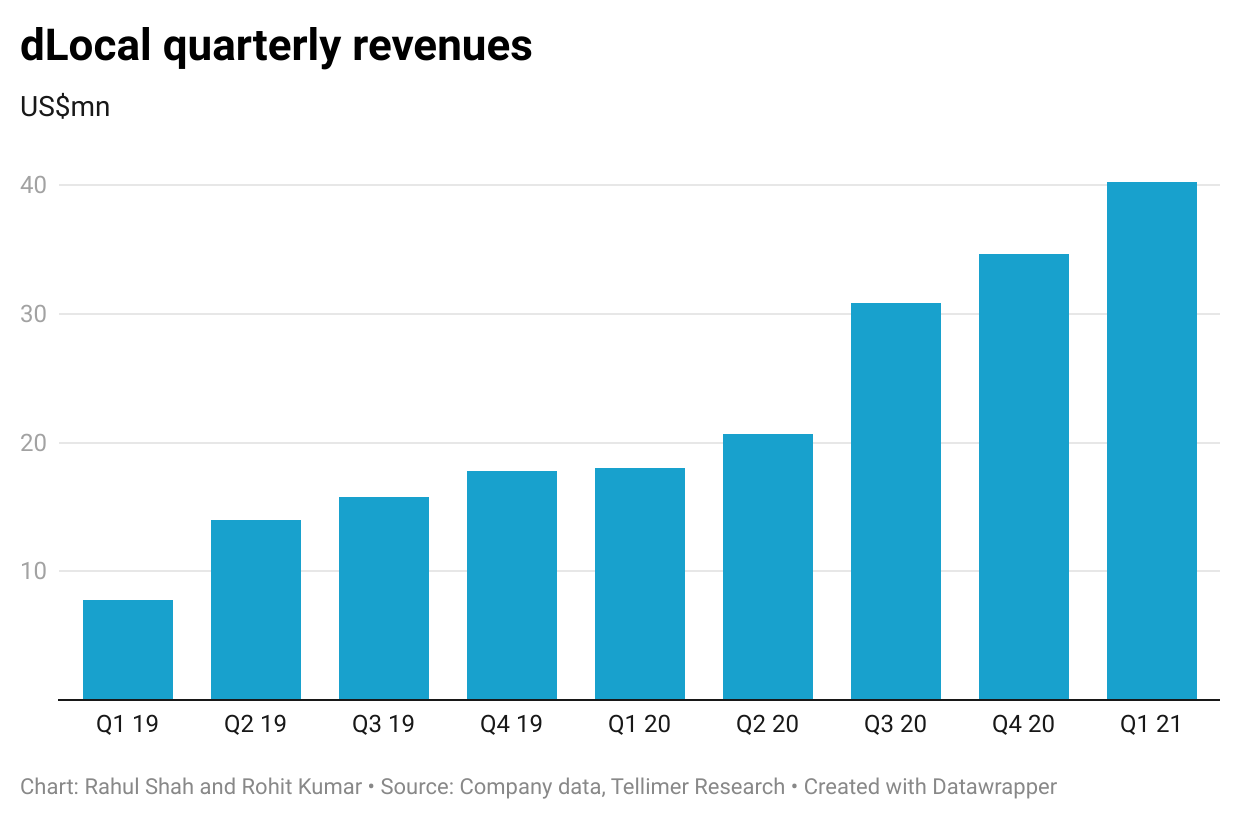 The firm’s gross margin is close to 60%, its EBITDA margin is running above 40% and the net margin has averaged 27% in recent quarters. 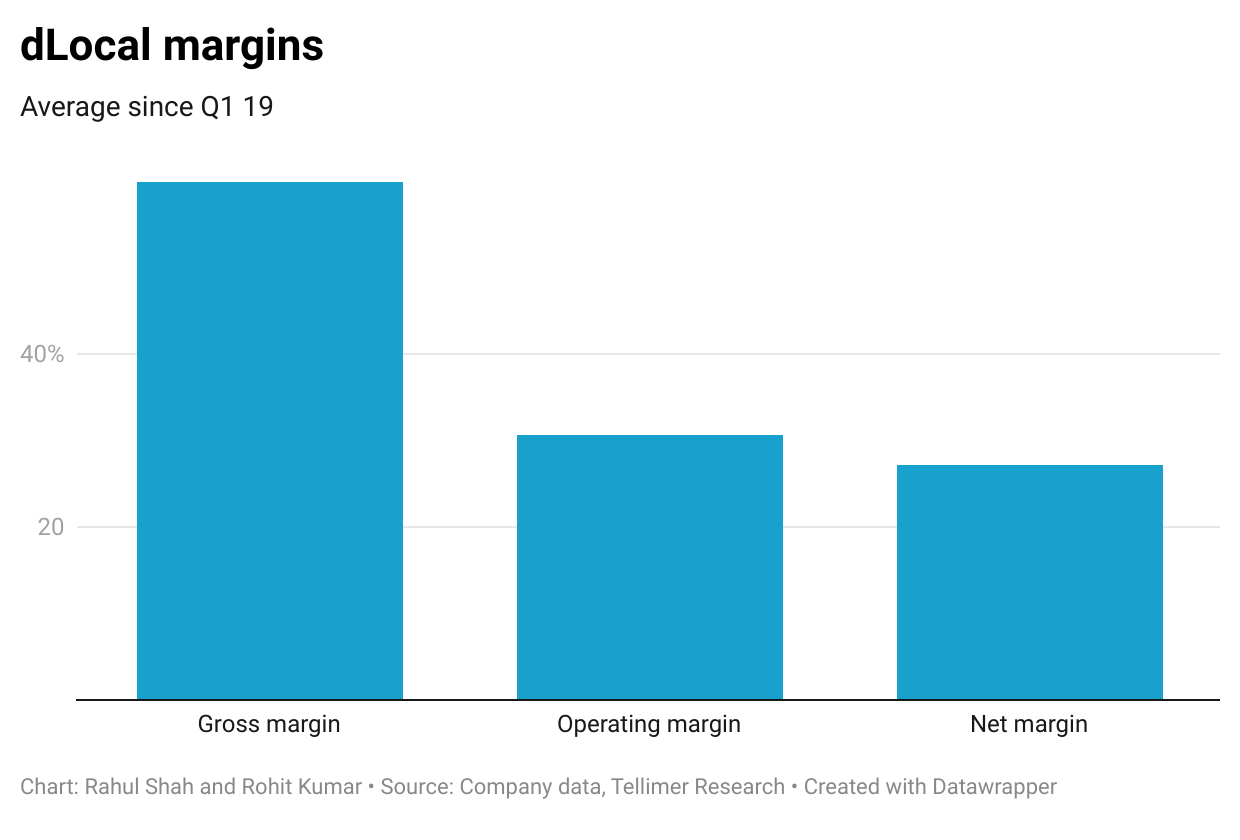 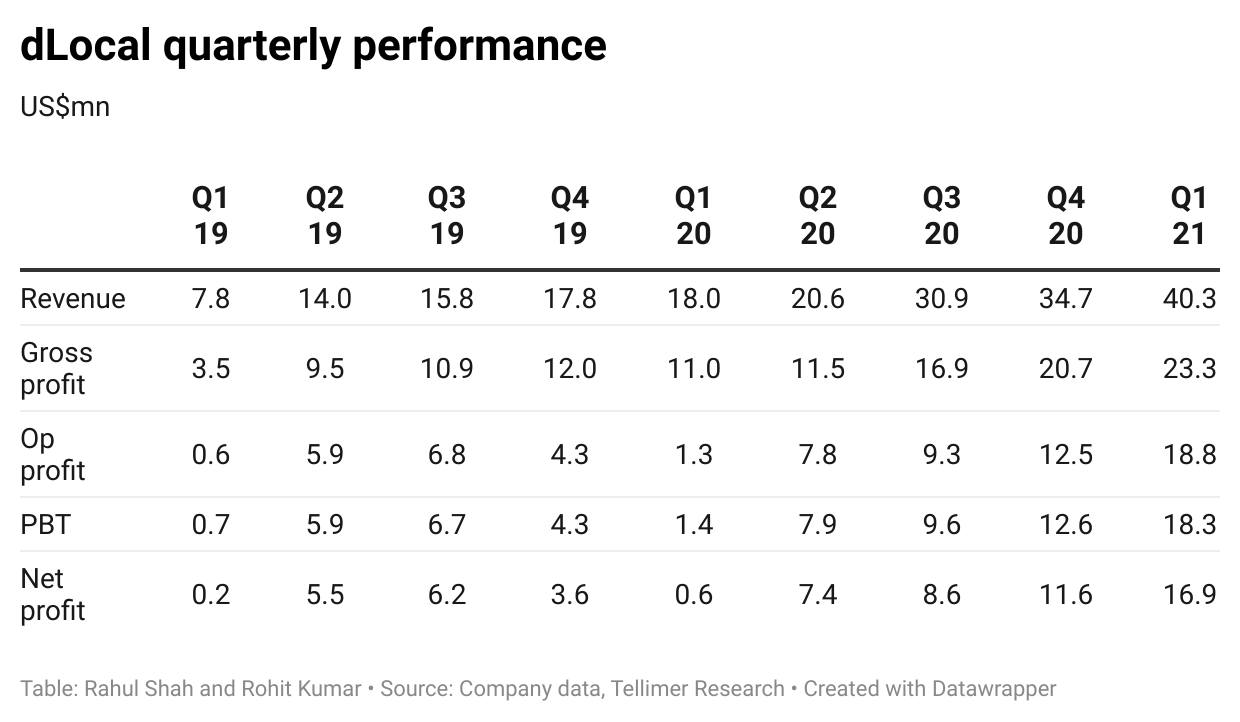 dLocal listed 29.4mn of its shares on Nasdaq on 2 June (with 4.4mn new shares and a 25mn secondary tranche). The IPO was priced at US$21 per share (above the US$16-18 indicative range), valuing the company at US$6.1bn. The shares are now priced at US$32, a 53% increase on the IPO price and valuing the company at US$9.4bn. At this price, the shares trade at a hefty premium to listed peers, which indicates that investors believe the firm can deliver strong profitable growth for a sustained period. 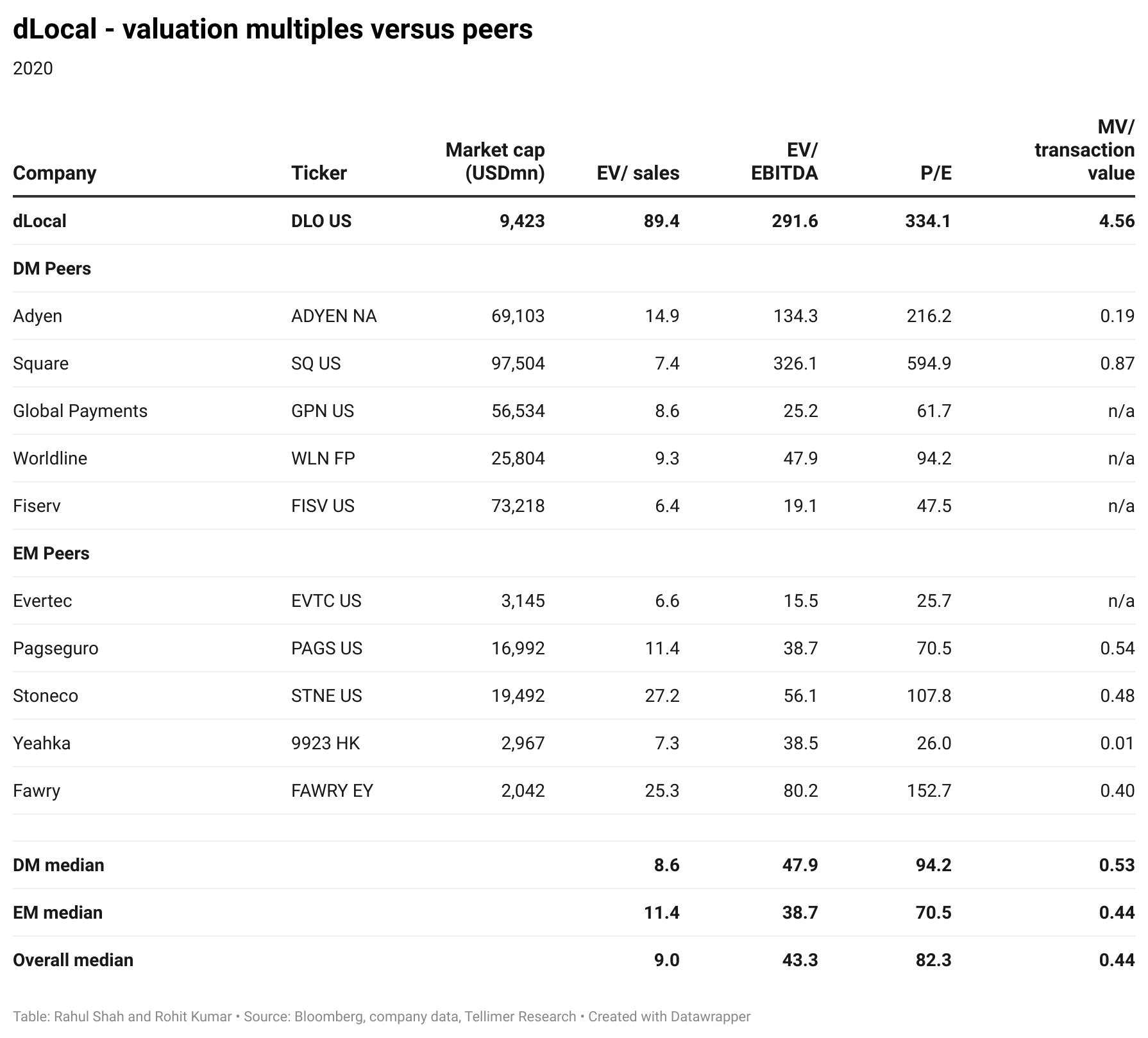 Geographical concentration. Around 90% of business volume and revenue is generated in Latin America, primarily Brazil, Mexico, Argentina, Chile and Colombia.

Concentration by client. The firm’s top 10 customers generate more than 60% of dLocal’s revenues. One customer generates more than 10% of the firm’s revenues.

Complex tax and regulatory compliance requirements across dLocal’s operations. Any violations could result in fines, restrictions on activity and/ or reputational damage for dLocal and its clients.

Competition. As dLocal grows it may increasingly come into competition with more established digital infrastructure firms, such as Adyen. However, we think such firms could also view dLocal as an attractive acquisition target, given its strong EM-focus and flexible technology stack. 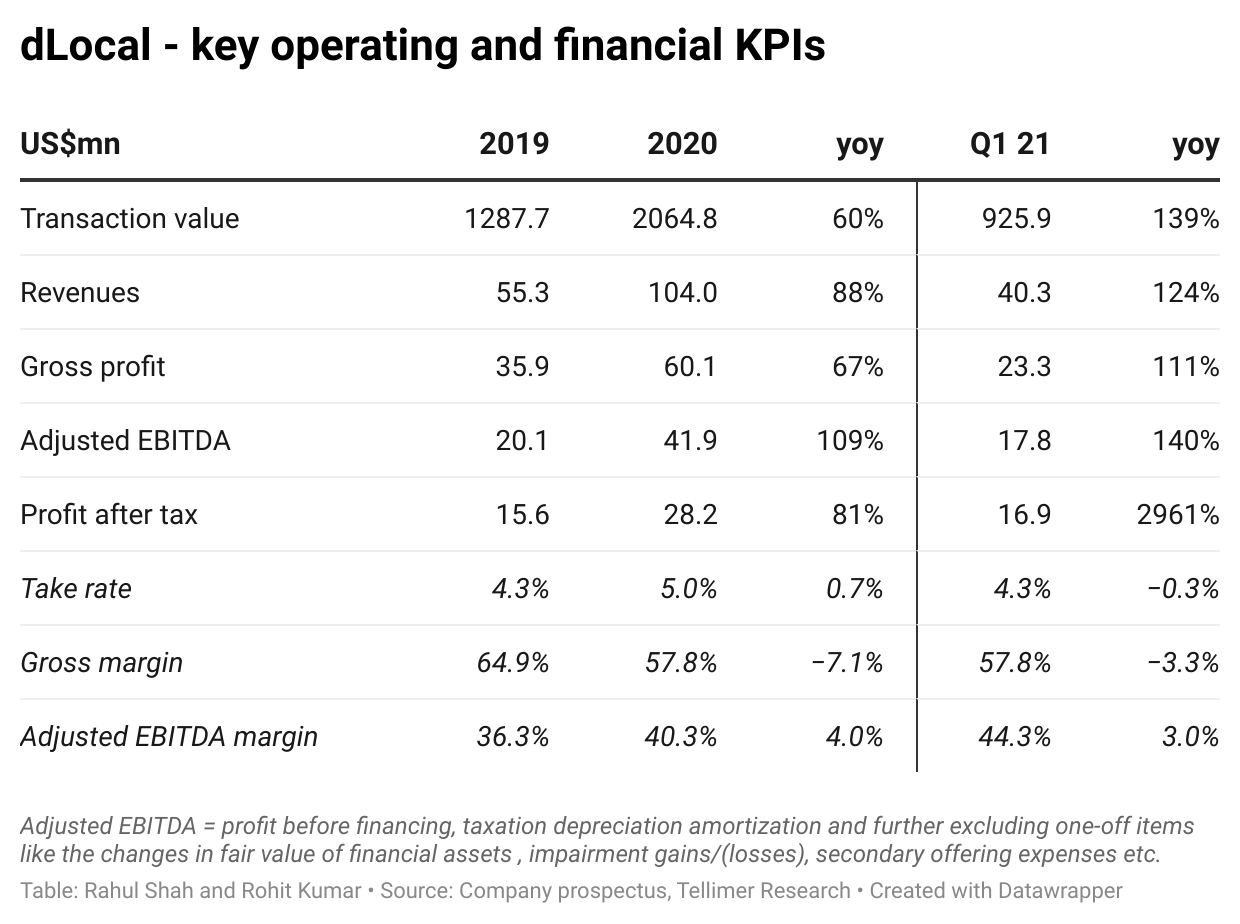