While on many geopolitical levels, US-Sino relations are frosty, some cooperation is taking place on other levels. Chinese Vice Premier Liu He has reportedly exchanged views with Treasury Secretary Yellen on issues of mutual concern. In a statement, the Treasury Department was quoted as saying "Secretary Yellen discussed the Biden-Harris administration's plans to support a continued strong economic recovery and the importance of cooperating on areas that are in US interests, while at the same time frankly tackling issues of concern." This comes after US trade representative Katherine Tai said that the US still faced "very large challenges" in its relationship with China.

On the currency front, Ahead of some key labour data on Thursday and Friday, the USD enjoyed some support from the improvement in the manufacturing data that was released yesterday. It recovered slightly off its lows to help strengthen the recent base. Technically, the base is now becoming a lot more substantial and the downside momentum on the USD does appear to be losing some momentum. Buying dips towards 89.7 on the USD index appears to be favoured at the moment, even though the longer-term prognosis is weak. Strong outcomes in the labour data later this week may prove to be the catalyst to help the USD stage a mini-recovery.

South Africa: South Africa’s Quarterly Employment Statistics (QES) survey for Q1 reported total employment increasing by 144,000 or 0,4% q/q in Q1 following a 0.8% q/q expansion in Q4. The recovery in jobs was primarily driven by a robust formal sector, while the informal and agricultural sectors remained under pressure. Looking ahead, the lingering impact of the pandemic and the uneven recovery of the economy make it difficult to envision employment levels returning to pre-pandemic levels anytime soon. This will continue to weigh on SA's consumptive dynamics and keep pressure on the government's tax revenue collection, particularly in the absence of the swift implementation of structural reforms.

Uganda: The International Monetary Fund said it reached an agreement with Uganda for a $1bn facility to help alleviate the impact of the coronavirus pandemic. The agreement was reached after Uganda agreed to adhere to conditions that include a prudent fiscal policy that creates space for much needed social and investment while keeping debt contained. The conditions will also strengthen spending efficiency, enhance financial sector resilience and will increase anti-corruption efforts. The IMF said that that the reform program aims to support Uganda’s recovery by safeguarding macroeconomic stability and generating more inclusive growth.

Namibia: Money supply growth in Namibia decelerated sharply in April, falling from 9.4% y/y in March to 3.1% y/y. This marked the third successive month of slowing money supply growth and the slowest pace of growth in four years. The notable decline in money supply growth suggests that the monetary environment is tightening, which will likely help offset external inflationary pressures.

Uganda: A local newspaper citing Uganda National Oil Co’s reported that the final investment decision for the planned 60k b/d refinery is expected in February next year. The issuance of engineering, procurement and construction contracts will start in January 2023. The oil company also announced that refining would start a year after commissioning a crude export pipeline. The completion of the final decision will drive the progress on the preparations for the oil field. The discovery of oil in Uganda is a significant development and will generate new revenue streams for the government and create job opportunities.

Nigeria: The Nigerian National Petroleum Corporation (NNPC) reported that the country’s crude oil export revenues slumped by as much as 98% from March to April this year due to movements in the price of gasoline. Specifically, April revenues from oil exports stood at $1.76mn (NGN 723mn) versus $87.14mn (NGN 35.72bn) for March. This notable drop in export revenue also comes on the back of Nigeria reducing its production as it abides by its OPEC+ production quota. It is worth highlighting that the sharp decline in export revenue is unlikely to be sustained going forward following Nigeria’s move to ink a deal with Sheel, Exxon, Total and Eni to develop an offshore oil block that includes the deepwater Bonga field. This move is aimed at boosting oil production over the long term as the deal could unlock up to $10bn in new investments in Nigeria’s oil industry, notes NNPC.

Kenya: Central Bank of Kenya Governor Patrick Njoroge announced that Kenya is expecting a total of $1.16bn in two financing operations from the World Bank and the International Monetary Fund in June. $750bn is expected from the World Bank to support Kenya’s budget and post-Covid economic recovery. The funding from the World Bank is part of the Development Policy Financing (DPF) framework used to provide direct budget support to countries. $410mn will come from the IMF as part of the first review of a $2,3bn 38-month financing program provided by the institution of Nairobi to facilitate economic reform and recovery. Furthermore, Njoroge also reported that Kenya is planning to issue new bonds to raise $1bn by the end of the month. With Kenya’s facing a rising risk of debt default, raising such funds in the market could prove to be a challenge as investors will demand a high premium.

China is a central planning master, and Beijing has made it clear that it will not tolerate volatility in commodities over the past couple of weeks. It would like to curb the speculative element that has been apparent in the market as it restocks following the dislocations caused by swine-flu and COVID-19.

Interestingly we see Russia holding talks with its metal producers about purchasing their metals for a state stockpile. This comes as Moscow looks to smooth the costs in the construction sector, which is impacted by higher commodity prices.

So what does this all mean? Well, it's early days yet, but from what we can see, there will be more state intervention in individual domestic commodities markets, which may well filter through to African countries rich in natural resources. State-owned trading entities could be the favoured transactors in an environment like this, suggesting more opaque FX markets in many cases.

Weekly data published by Bloomberg shows that global risk appetite remains robust, with emerging market exchange-traded funds listed in the US recording their biggest inflows in two months last week. Optimism surrounding the global economic recovery driven by the commitment from major central banks to “looser for longer” monetary policy against the backdrop of significant progress on the vaccine front and the easing of coronavirus containment measures.

While there is still a degree of caution in the markets, risk appetite has improved markedly in recent weeks and is expected to remain elevated going forward, which should continue to offer support for African assets. This comes on the back of soaring commodity prices, which are adding to the tailwinds for African assets.

High-frequency PMI data released by Markit on Tuesday revealed that Nigeria’s economic recovery gained momentum in May, underpinned by the easing of coronavirus containment measures and a recovery in global demand. Specifically, Nigeria’s headline PMI reading came in at a nine-month high of 54.4 in May from 52.9 in April. Note that Nigeria’s headline PMI reading has been buoyed in expansionary territory for 11 straight months. 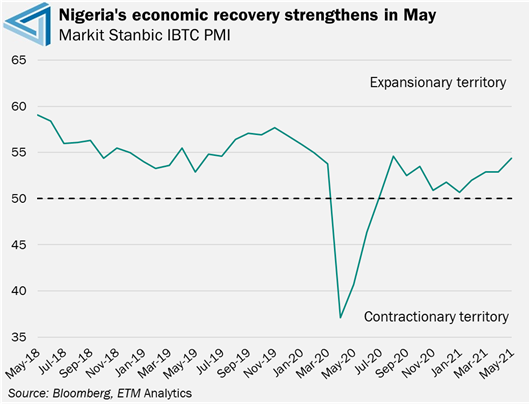 Details from the Markit report revealed that the improvement in the health of Nigeria’s private sector was driven by a robust rise in new orders, with the rate of growth the strongest since last August. Exports meanwhile rose at the fastest pace since February 2020. Markit highlighted that manufacturers saw the sharpest expansion in activity, followed by the agriculture, services, wholesale, and retail sectors. In order to cater for growing demand, Markit noted that firms increased their staffing levels.

On the pricing front, overall input price inflation rose to a record high in May, driven up by soaring raw material costs and persistent weakness in the Nigerian naira. Markit said in the report that higher input costs were often passed on to clients, which saw prices charged increase to the third-highest on record. Looking ahead, business sentiment remained positive in May, with expansion plans supporting optimism amongst businesses. While the May PMI print shows that Nigeria’s economy remains on a path of recovery, risks to the economic outlook remain tilted to the downside amid heightened insecurity, low FX liquidity and lingering uncertainties pertaining to the COVID-19 pandemic.