Global bond yields have stabilised this morning it seems, if what is happening in the UST market is anything to go by. Treasury yields are up a couple of bp this morning following a sharp rally for bonds yesterday, which took US yields back to around 3.00% and German and UK yields down by more than 20bp. With growth concerns now so elevated and some weak data coming out from several jurisdictions, it is not surprising to see such a strong rotation into bond markets, even though equities managed to post some decent gains on the session yesterday. The market is reducing its priced-in risk for sharp rate hikes through 2023, which has offered some support to equities but has also made bonds look more attractive once again, especially at the longer end of the curves.

Shifting the focus to the commodities market, higher US rates and the impact on US growth coupled with the rise in COVID-19 cases in China are front and centre at the moment when it comes to base metals. Metals across the board have nursed sustained losses with the likes of 3m LME copper hitting its lowest level since February 2021 yesterday before rebounding off $8326.00/tonne. This morning there are some buyers around but the mood is still cautious in Asia. In the near term risks have shifted to the downside as investors price for lower economic dynamism across the globe. We do however believe that the world’s Central Banks are playing catch up and may not in fact have the ability to hike as aggressively as they suggest.

Africa: President of the African Development Bank, Akinwumi Adesina, has said that Africa must wean itself off dependence on food and medicine imports as the bank approved the creation of a pharmaceutical tech foundation and began processing requests for food relief. Last month, the bank approved a $1.5bn financing facility for emergency food production, aiming to prevent a looming food crisis. Meanwhile, the bank’s board this week approved the creation of a new Africa Pharmaceutical Technology Foundation, which will allow Africa to leverage intellectual property rights, protected technologies, and innovations to expand Africa’s pharmaceutical and vaccine manufacturing sectors. Given that Africa imports around 80-90% of its medicines, the approval is potentially a game-changer and could help the continent deal better with future pandemics.

Ghana: Finance Minister Ken Ofori-Atta has reiterated that the Ghanaian government remains committed to implementing measures to address the sustained cedi weakness against its major trading partners. According to Ofori-Atta, the government is complementing efforts to keep the cedi afloat through its fiscal consolidation measures and real sector interventions such as the Ghana CARES program to support import substitution. Ofori-Atta added that the “implementation of a 30% reduction in expenditures and other expenditure measures approved by the cabinet are all helping to reduce the fiscal deficit and thereby reduce the pressure on the exchange rate.” Meanwhile, the government is planning to raise about $1bn to support this year’s budget and foreign exchange reserves. This forex inflow, according to Ofori-Atta, is expected to improve the supply of foreign currency and stem the slide in the currency.

Kenya: Data from Kenya’s quarterly economic review showed that overall inflation decelerated to 5.3% in Q1 from 6% in the final quarter of 2021. The slowdown in inflation was due to easing prices of fuel items following government interventions and declining prices of key food items due to seasonal factors. Food inflation slowed to 9.2% from 9.9% in Q4, while non-food inflation edged marginally higher to 2.1% from 2% in Q4, reflecting muted demand pressures in the economy. While inflation slowed in Q1, risks to Kenya’s inflation outlook are tilted to the upside amid sustained weakness in the currency and higher food and fuel prices, especially as the government considers removing the fuel subsidy that cushioned Kenyan citizens against the high costs.

Nigeria: Nigeria, Niger, and Algeria have held talks this week to revive a more than a 40-year-old project to pipe gas across the Sahara, a potential opportunity for Europe to diversify its gas sources. According to Niger’s oil ministry, the three countries have set up a task force for the project and designated an entity to update the feasibility study. The revival comes at an opportune time as the European Union is seeking to lessen its reliance on Russian gas following the war in Ukraine and is seeking alternative sources. The Trans-Saharan gas pipeline is an estimated $13bn project that could send up to 30bn cubic metres a year of supplies to Europe and would allow several African countries to access the high-value energy source.

South Africa: It has been a rather unremarkable week for the USD, and the same might be said for the ZAR. Without any directional momentum from the USD, the USD-ZAR traded in range bound fashion and will finish the week only slightly firmer. That would suggest that some underlying support for the ZAR remains intact, but that would not reflect the vulnerability it exhibited through yesterday’s trade when it appeared as though the ZAR would break out of a broader bull flag formation to the topside.

Current account dynamics, or the balance of payments of a country, remain a key driver of currency movements. As such, having a strong grip on current account dynamics will provide traders and investment professionals with valuable insight into the direction of a currency. With this in mind, it is worth looking at the latest current account data for Kenya. Data from the Central Bank of Kenya's (CBK) quarterly review showed that the current account deficit narrowed to $1.2bn in the first three months of the year from $1.3bn in the first quarter of 2021, reflecting an improvement in receipts from merchandise goods, services, and remittances. Secondary income flows were boosted by remittances which increased to $1,02bn in Q1 2022 from $848mn in a similar quarter in 2021. 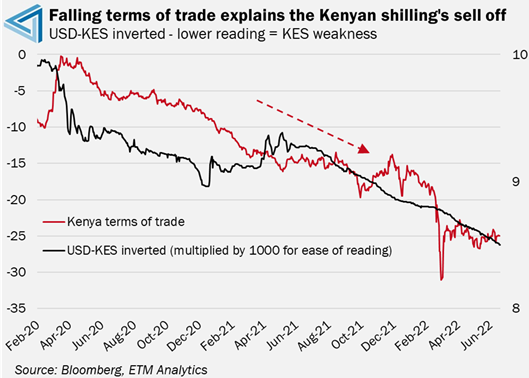 Although the Q1 reading was an improvement from Q4 and the corresponding period in Q1 2021, Kenya continues to run a current account deficit. Given commodity prices are set to remain lofty in the coming months as supply pressures persist, and Kenya is a net importer of oil, we expect the current account deficit to remain. Kenya’s weak terms of trade will further weigh on the Kenyan Shilling, which has already shed almost 4% on a year-to-date basis.

Fixed Income: The are some embers of light flickering at the end of the tunnel for Ethiopia

It has been a tumultuous time for African countries over the past two and a half years. Africa has been subject to multiple shocks, including the Covid-19 pandemic, the war in Ukraine, aggressive tightening in global monetary conditions and several idiosyncratic challenges. The impact of the shocks has been more pronounced in some countries, especially from a fiscal perspective. One of the hardest-hit countries has been Ethiopia which has faced a swathe of external and domestic shocks.

In addition to the external shocks, Ethiopia has faced a severe drought and a deadly war in the northern part of the country. The combination of which has resulted in a macroeconomic, fiscal and humanitarian crisis in the country. The IMF said in a recently published report that Ethiopia’s budget deficit is projected to widen following the approval of a supplementary budget which included increased military and humanitarian spending and sharply lower tax revenues amid the conflict. 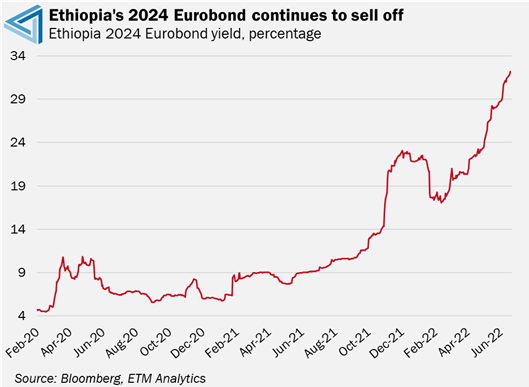 The IMF added that while the reform of the treasury bill market has facilitated substantial increases in the volume of issuances, the lack of external financing has required central bank advances to finance the larger deficit. The authorities remain committed to improving the efficiency of public investment, oversight and reforms of State-Owned Enterprises and containing public sector borrowing, consistent with their goal of meeting development objectives while strengthening debt sustainability.

Although this is encouraging, debt relief under the G20 Common Framework, as part of a package supported by an IMF program, is essential for Ethiopia to reduce debt vulnerabilities. The government has continued reiterating its interest in an IMF program to support its reform agenda. The IMF said that it would cooperate closely with the Creditor Committee to provide technical support to the Common Framework process, adding that it is working on steps towards commencing discussions on an IMF program as soon as conditions allow. The IMF said that progress on implementing roadmaps on foreign exchange reforms and modernisation of monetary policy should help address FX shortages and reduce inflation.

In conclusion, while fiscal and macroeconomic risks in Ethiopia remain acute, there is a light at the end of the tunnel for the country from an investment perspective. An improvement in investor sentiment will depend on whether the government can end the conflict in Tigray while simultaneously rolling out much-needed growth supportive and fiscal reforms.

Macroeconomic: Central Bank of Egypt opts to leave rates on hold as it assesses the impact of its previous hikes

The Central Bank of Egypt surprised many on Thursday after the Monetary Policy Committee voted in favour of leaving the deposit rate unchanged at 11.25% and the lending rate at 12.25%, even as inflation continues to run hot. The discount rate was also kept unchanged at 11.75%. The MPC said in its policy statement that for the next six months, it would tolerate elevated inflation, caused mainly by the conflict in Ukraine, as the economy grows more slowly than expected.

The CBE highlighted that headline urban inflation continued to increase but at a slower pace, coming in at 13.5% in May 2022, from 13.1% in the previous month. The central bank noted that the May 2022 inflation reading continued to be affected by the depreciation of the Egyptian pound and by the devastating impact of the Russia-Ukrainian conflict on commodities. 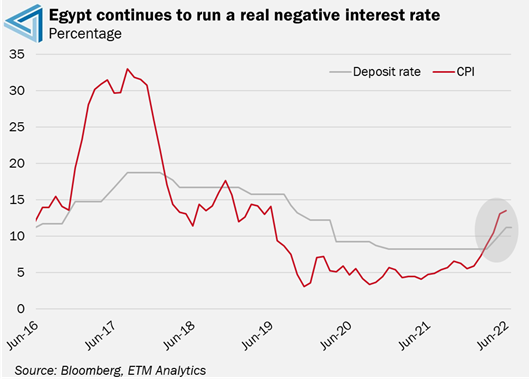 The MPC said in its policy statement that it treats the developments stemming from the Russia-Ukrainian conflict to be among the exogenous shocks that are outside the scope of monetary policy and yet may lead to transitory deviations from pre-announced target rates. The CBE added that the annual headline inflation rate would be temporarily tolerated relative to the CBE’s pre-announced target of 7% (±2 percentage points) on average in 2022 Q4 before declining thereafter.

In its concluding remarks, the CBE said that it takes note of its policy rate hikes in the previous two meetings and will continue to assess their impact on inflation expectations and other macroeconomic developments over the medium term. The MPC reiterated that the path of future policy rates remains a function of inflation expectations rather than of prevailing inflation rates. As such, the CBE said it would not hesitate to adjust its stance to achieve its price stability mandate. While consumers in the country will cheer the CBE’s decision to leave rates on hold, the decision to leave rates on hold will add to the headwinds facing the Egyptian pound, which has continued to weaken after the significant devaluation in May.