Democracy is a good thing for citizens. Most would agree with this statement, but disagree on the underlying conditions needed to support a good democracy. Much more controversial is whether democracy is a good thing for investors. LatAm arguably offers examples where it is not. LatAm equities have underperformed global Emerging Markets and Commodities since the start of 2020 by about 30%. Poor politics may mean this gap persists. 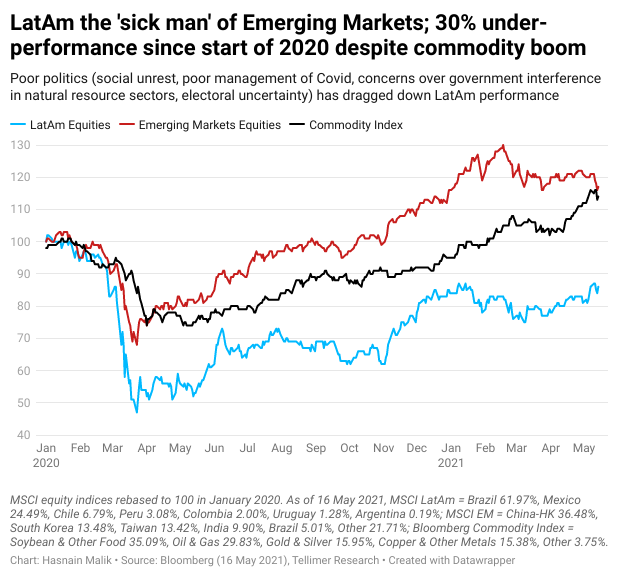 If democracy is the best guarantor of long-term social justice and social stability then, of course, investors should welcome it, whether driven by pure financial return or ESG-type ethics. But if democracy leads to policy paralysis, wild swings in policy, or tyranny of the majority (with the consequent disenfranchisement and radicalisation of the minority) then the picture becomes much murkier.

And for EM investors, as ESG moves closer to the centre of the investment process and, if the returns outlook from the outperformers of the past decade – China, Korea, and Taiwan – start to fade, then this debate becomes much more relevant.

In emerging markets (EM), Latin America is perhaps the best example of this murkier assessment of the impact of democracy on investment returns and risk. Many of the factors blamed for high political risk in LatAm – such as economic hardship, inequality, and corruption – are prevalent elsewhere in EM, at times to a significantly worse degree. Arguably, what distinguishes LatAm from other parts of EM is the democratic release valve (ie highly competitive elections) for the frustrations borne out of these social injustices.

Those competitive elections in LatAm are resulting in highly fragmented legislatures, swings from left to right-of-centre policy, and short-termism in government policy. Even some of the economic guard rails painstakingly established over decades are beginning to crack: consider the passage of Covid-era laws which allow for an early drawdown of about 20% of private pension assets in Chile, the regional beacon for orthodox economic policy.

In the charts below, we compare LatAm countries with other EM regions along three measures of social injustice – misery index, Gini coefficient, and corruption perceptions – and two measures of democracy – Reporters Without Borders (RSF)'s press freedom score and the EIU's democracy score. We also chart the generally low count of seats enjoyed by the largest political party in legislative bodies in LatAm and present a table of upcoming elections in LatAm. 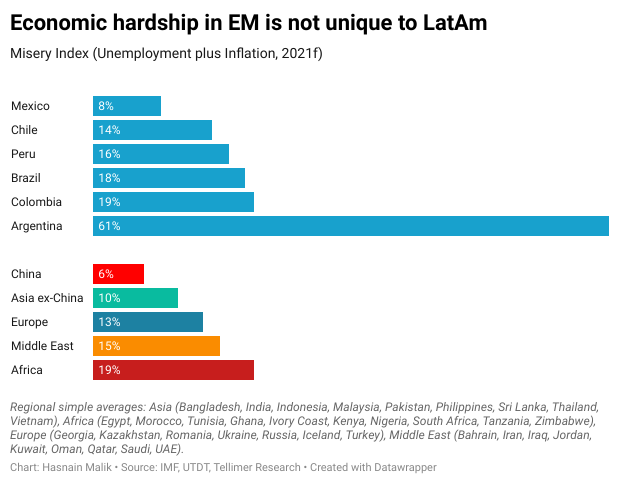 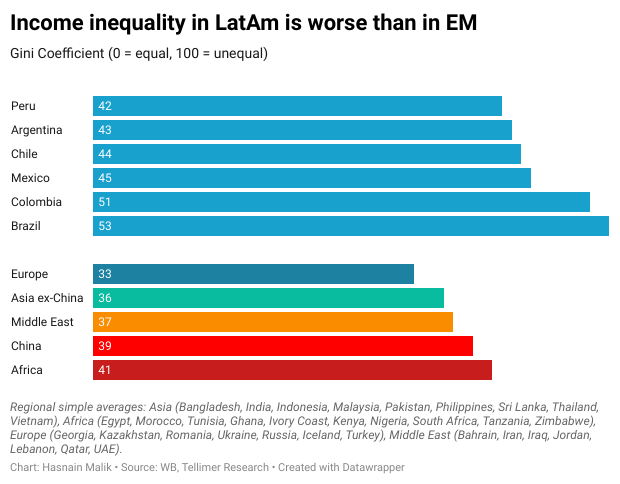 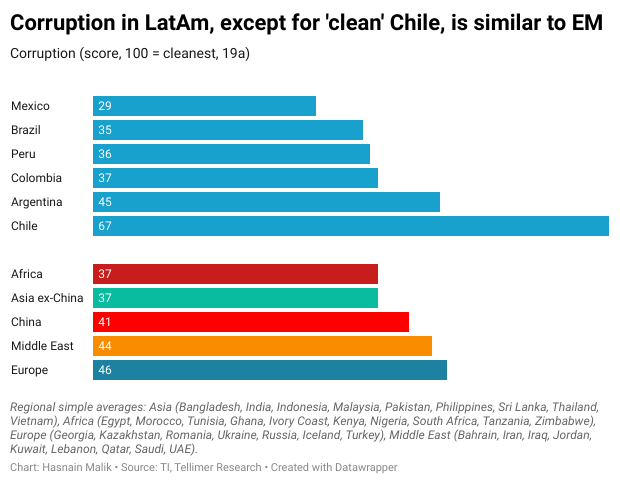 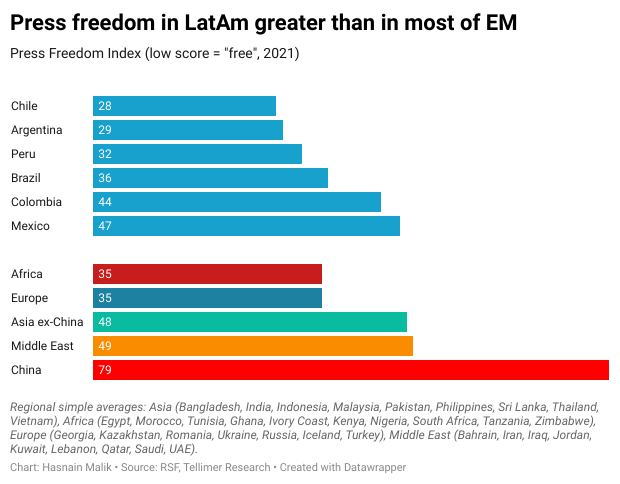 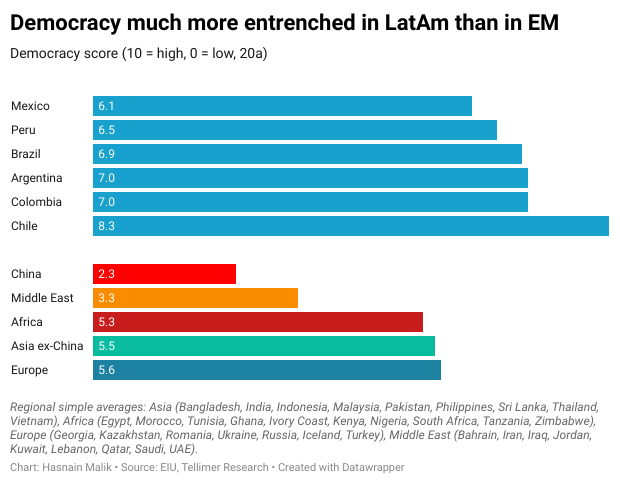 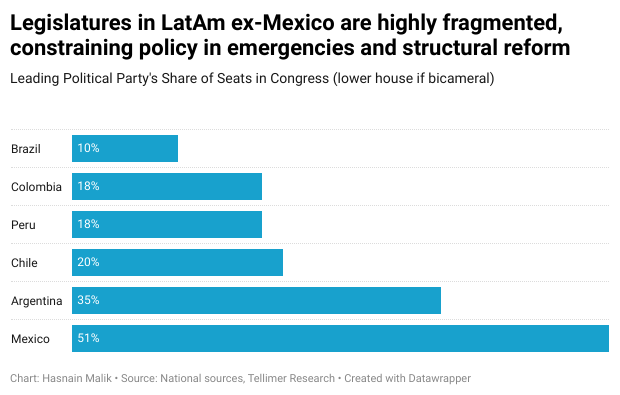 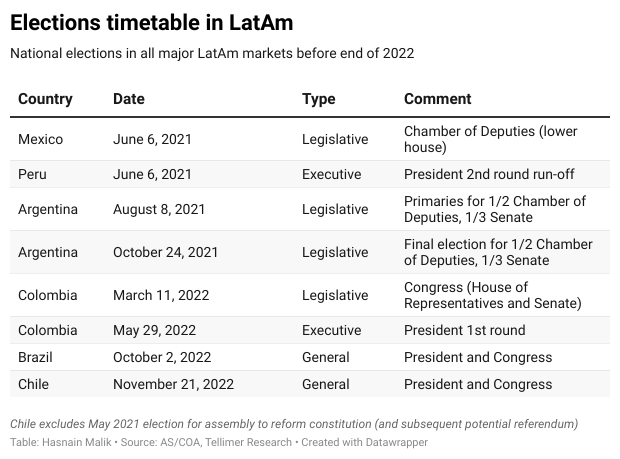 Colombia underperforming oil peers and cheap but struggles to reform, May 2021

The Brazilian blowout in equities in 10 charts, April 2020

Human rights presents a dilemma for ESG investors and US foreign policy, February 2021