Global bond yields continued to rise yesterday, with the benchmark 10yr UST yield breaching the 3.000% level for the first time since mid-July, while 10yr UK yields rose above 2.5000% and Bund yields rose to 1.3000%. There was no real specific trigger for the moves seen yesterday, with traders still focussing on the upcoming Jackson Hole event at the end of this week. Expectations are clearly that central banks will maintain their hawkish stances and their resolve to combat inflation even in the face of weakening economic growth.

This morning, we are seeing USTs nurse their losses, while Australian bonds are under pressure as they catch up to yesterday’s global moves. Even JGBs have been put under pressure recently, with 10yr yields there trading well above 0.2000%, which will likely spark some central bank intervention in the coming sessions. For global markets, the rise in yields will keep risk sentiment depressed and riskier assets under pressure for now.

It was another powerful day of gains for the USD that surged against the EUR and the GBP, which have cracked below prior lows seen in mid-July. The EUR has crashed through parity and looks set to lose more ground, while the GBP is now trading comfortably below 1.1800, with a deeper retreat in store. As equity markets come under significant pressure, the desire to rotate back towards the USD has intensified, and for now, the trend probably has further to run, especially ahead of the Jackson Hole symposium later this week. As investors price in the Fed’s outlook and compare it to that of other DM central banks that are dealing with mega headwinds, it follows that the USD continues to enjoy some support.

Egypt: The International Monetary Fund (IMF) has reportedly called on Egyptian authorities to cancel all low-interest lending initiatives, including loans for small and medium-sized enterprises and businesses operating in the tourism and mortgage sectors. According to sources close to the matter, the IMF stressed that the unification of all interest rates in the market is necessary. Over the past six years, Egypt has launched several low-interest financing initiatives, such as financing the tourism sector at a subsidized interest rate of up to 8%, small projects at 5%, medium enterprises and the industrial and agricultural sector at 8%, and mortgage financing activities at an interest ranging from 3% for low-income people to 8% for middle-income people. Meanwhile, Prime Minister Mostafa Madbouly was cited in a cabinet statement as saying that the Egyptian government is in the final stage of agreeing on a new loan from the IMF. No further details were provided

Kenya: Opposition leader Raila Odinga yesterday filed a lawsuit challenging the outcome of the August 9 presidential election. In the petition, Odinga asked the courts to nullify the vote's outcome on several grounds, including a mismatch between the turnout figures and the result and failure by the commission to tally ballots from 27 constituencies as required by law. Last week, the election commissioner declared Deputy President William Ruto had won the election by a slim margin, but four out of seven election commissioners dissented, saying the tallying of results had not been transparent. Under Kenya's constitution, the Supreme Court must now make a ruling within 14 days of filing the petition. If it nullifies the vote, as it did in 2017, fresh elections must be held within 60 days.

Nigeria: The Federal Ministry of Agriculture and Rural Development said that Nigerian authorities had created a committee to develop regulations for the country's cocoa sector. The National Cocoa Management Committee will seek to make the industry more transparent and work towards establishing a regulatory body, the Nigerian Cocoa Board. The original board was abolished in 1986 when Abuja liberalised the country's cocoa laws. Unlike in Ghana and Côte d'Ivoire, there is no central regulation in Nigeria in the cocoa sector. Nigeria is currently the world's fourth-largest producer of cocoa, and the commodity is the country's leading agricultural export, providing another valuable source of foreign currency.

Mozambique: Finance Minister Max Tonela yesterday said that the World Bank will provide Mozambique with $300mn to boost its budget. Meanwhile, the World Bank’s country director in Mozambique said that the grant will assist Mozambique’s recovery from Covid-19 and structural reforms to foster sustained growth while providing much-needed financing to alleviate recent fiscal constraints. The grant from the World Bank marks the end of a 6-year budget financing freeze on the country. The World Bank halted direct support to Mozambique six years ago after a sovereign debt scandal.

Uganda: Data from the Uganda Coffee Development Authority showed that Uganda's coffee exports dropped 17.7% in July compared to the same month last year, hurt by a prolonged drought that depressed yields across the country. Africa's largest export of the beans shipped a total of 576,468 60-kilo bags in July, compared to 700,0355 bags exported in the same month last year. The decline in July was the seventh straight month that coffee exports have fallen year-on-year. The drop is set to weigh on dollar inflows and present further downside risks to the Uganda shilling.

Oil: There was an interesting development in the oil markets yesterday, with Saudi Arabia suggesting that OPEC+ may now need to cut supply to stabilise volatility within the market and halt the slide seen in prices over the last few weeks. Oil prices were under pressure yesterday, at one point sliding more than 5% on weak economic growth concerns and a stronger USD. However, the comments from the Saudis saw this reversed, with both Brent and WTI closing flat on the session, with the former trading back above $97 per barrel this morning after testing lows of $92 yesterday.

At the start of the week, the selling pressure on the Kenyan shilling showed no signs of abating, with the currency plunging to a fresh low. The shilling closed just shy of 120 per dollar, adding to year-to-date losses of almost 6% amid increased dollar demand from oil marketers, importers of general goods, and manufacturers. Compounding the shilling weakness yesterday was election-related uncertainty after Raila Odinga filed a challenge to August general election results in the Supreme Court. 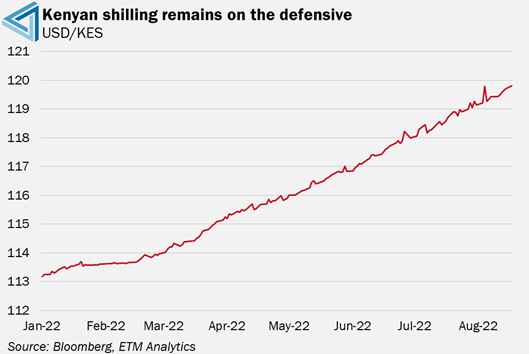 Increased dollar demand has not been matched by supply amid reduced inflows from key export earning sectors in Kenya, such as agricultural exports and tourism. That said, it is worth noting that remittance inflows, another key foreign currency source, have remained strong. The latest data from the Central Bank of Kenya showed that despite the monthly contraction in July, the cumulative inflows for the 12 months to July 2022 totalled $3,995mn compared to $3,442mn in the same period in 2021, representing an increase of 16.1%. The US remained the largest source of remittances into Kenya, accounting for 58% in July 2022.

Looking ahead, risks to the shilling remain tilted to the downside as month-end foreign currency demand from importers in the next couple of days is set to place further pressure while election-related uncertainty persists. This suggests the shilling could extend its monthly drop to 15 straight months, marking the longest stretch of monthly losses on record.

While investors have become increasingly cautious amid growing uncertainty over the global economic and monetary policy outlook in recent weeks, it is encouraging to note that there is still some hunger for yield. Data published by Bloomberg on Monday showed that exchange-traded funds that buy emerging market stocks and bonds rose last week, marking the second straight week of inflows.

Inflows to US-listed emerging market ETFs came in at $206.7mn in the week ending August 19, thanks to strong inflows in EM bond ETFs, which rose by $248.3mn. Stock ETFs meanwhile contracted by $41.5mn last week with the biggest outflows from Asia focussed ETFs. Zooming in on Africa, the biggest inflows were into South African ($22.3mn) targeted ETFs, followed by Egypt ($7.4mn), Nigeria ($5.5mn), Ghana ($2.8mn) and Kenya ($2.5mn).

While the headwinds facing African assets are acute, with the Fed expected to remain aggressive in its fight against inflation and inflation expectations, Africa is home to some of the highest yields in the world. Therefore, while African assets are viewed as extremely risky, in many cases, the risk is more than compensated for by high yields. As such, we expected demand for African assets to remain relatively healthy. Furthermore, it is worth noting that should we see the rates market start to price in a more modest US interest rate outlook later in the year, we could see African bonds gain further appeal in the months ahead.

Macroeconomic: The relationship between India and Africa continues to strengthen

India is the fifth largest investor in Africa, with a cumulative investment of $54bn. India is also a major trading partner for many African countries. India’s main exports to Africa are refined petroleum products and pharmaceuticals, while Africa's primary exports to India are crude oil, gold, coal and other minerals. India's bilateral trade with Africa had reached EUR 88.7bn in 2021-22 compared with EUR 57bn the previous year. Over 33 African countries have benefited from the Duty-Free Tariff Preference scheme between Africa and India. 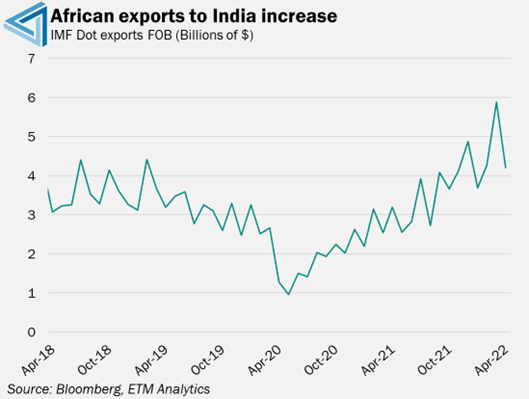 Recently several African leaders were in New Delhi for a key investment meeting. There were a total of 40 Ministers from 17 countries, including Burkina Faso, Congo, Cameroon, Eswatini, Ethiopia, Gabon and Malawi, among others. The event was aimed at boosting commercial relations between Africa and India. The annual meeting has become pivotal in encouraging Indian companies to establish and grow their footprint in Africa.

Unlike China, which has concentrated on creating infrastructure and extracting natural resources from Africa, India, through its investments, has focused on its core competencies of resource development, information technology, education and health care. India and Africa’s relationship is expected to strengthen in the coming years as Africa starts to diversify its trading partners. Recently we have seen how dependent Africa is on China for trade. China’s economic slowdown has highlighted Africa’s vulnerability to Beijing. Africa is considered the world's “breadbasket” for many natural resources. Therefore, it will become even more important for major economies such as India to start implementing policies that encourage strengthening relationships with Africa.