Debt forgiveness for Emerging Markets: Where do we stand?

A month on from the start of the suspension period under the G20's debt service suspension initiative (DSSI), designed to provide temporary debt service relief for certain poor countries, where do things stand? To summarise:

The majority of countries eligible for DSSI have expressed interest in participating. Over half of the 73 eligible countries had indicated interest to participate, and 20 countries had made formal requests for support under the DSSI so far, according to the IMF press briefing on 21 May. We know who some of them are, but not all. The Paris Club has already approved debt service suspension for seven countries so far (as of 2 June): Burkina Faso, Cameroon, Dominica, Grenada, Mali, Mauritania, and Nepal; two of whom have bonds (Cameroon and Grenada). More are expected to follow suit at the Paris Club, including Pakistan and Ethiopia (both of whom have bonds), while Angola (which also has bonds) confirmed this week that it had asked for bilateral debt relief under this initiative, according to media reports.

Indeed, it seems implausible to us to think that the countries that seemed to be at the forefront of lobbying for debt relief in response to the coronavirus crisis (either in the form of DSSI or other guises), such as Pakistan and Angola, would not then seek to take advantage of it when the opportunity presented itself.

And international leaders, through the IMF, World Bank and G7, remain firmly committed to implementation of the DSSI, meeting yesterday to discuss progress according to the IMF MD Kristalina Georgieva in a media interview. She announced a target of US$12bn in debt relief for eligible countries (“an injection into these countries”), presumably the amount of debt service due to Paris Club creditors during the suspension period (1 May - 31 December 2020). She noted leaders committed to publish data and press for more transparency on the initiative (“some may do their part and some may not”); one of the weaknesses so far, we think, is the lack of agreed official data on the exposures and sums involved from bilateral creditors, whereas the firm data we do know is on public bonds – see Table 1 below.

However, the call for private sector creditors to participate in the initiative on comparable terms has, as expected, meant that some countries are faced with a difficult decision if suspending debt service is tantamount to default (whether that is a payment default and/or default rating). Private sector participation is at the request of the borrower and is meant to be on a voluntary basis for creditors, as indicated in the G20 TOR and codified in the private sector's voluntary TOR published by the IIF on 28 May. So, in seeking bilateral debt relief, do countries want to put their credit rating and market reputation, and future market access, at risk?

There might be other concerns from borrowing countries too. First, the requirement under the G20's TOR that prohibit participants from contracting new non-concessional debt during the suspension period. Second, the possible fear that official creditors could even push countries that seek bilateral relief into seeking comparable treatment from private creditors (against their will). Though private sector participation is meant to be voluntary, it is not clear how the official sector will react if it transpires that there is no meaningful private sector involvement (PSI).

Hence, some countries may feel deterred from seeking bilateral relief under DSSI at all because of the possible consequences for their commercial debt. According to the IMF, a few (unnamed) countries have said publicly that they are not inclined to take up DSSI (presumably those with bonds, as otherwise, they have little to lose in our view).

According to media reports, countries such as Nigeria, Senegal, Kenya, Rwanda, and Benin have shown some reticence towards DSSI or in seeking comparable treatment from bondholders. Nigeria, Senegal and Kenya all have multiple bonds outstanding and may therefore rely more on maintaining market access. Senegal, which has been among SSA issuers who have been the longest in the market (it debuted in 2009), has been one of the more progressive issues in SSA in our view and will wish to protect its market reputation. And at the other end of the scale, while both Rwanda and Benin only have one bond, they are incentivised to maintain market access too. Rwanda might have wanted the option to refinance its 2023 maturity (although since its debut, hasn’t really made many noises about returning to the market) while Benin has some other commercial bank loans too (indeed, it doesn’t have a coupon due during the DSSI suspension period, because it has an annual coupon, paid in February, but interest will still accrue). And while Angola has decided to seek bilateral relief, it seems to have ruled out extending this to other (commercial) creditors, according to reports.

Finance ministers (if not their masters) may be right to be worried about market consequences of pursuing (or being seen to pursue) DSSI. DSSI is already having ratings consequences. Moody's has placed three sovereign ratings on review for downgrade over the last month, namely Pakistan (B3), Ethiopia (B2), and Cameroon (B2), because of their actual request, or expected intention, to seek official sector debt service relief under the DSSI initiative. While the agency noted that suspension of debt service to official creditors would be unlikely to have rating implications of itself, it would have to assess whether any private sector losses that arose from extending this treatment to commercial creditors because of the application of comparability were consistent with the rating. Yet Moody's notes that Ethiopia has stated its desire to engage only with official sector creditors while the Paris Club statement on Cameroon’s participation in DSSI noted the government is committed to seeking a debt service treatment from all its other bilateral creditors (no mention of the bonds).

Conversely, Moody's downgraded its rating on Maldives on 21 May, from B2 to B3, not because of DSSI but because of the macroeconomic impact of coronavirus on the country, mainly through tourism, although it did note the risk that participation which entailed creditor losses would be rating negative.

And we think Africa bonds, in particular, have been penalised, with a yield premium compared to countries in other regions (in or outside the scope of DSSI) – see here. A clear statement from finance minsters that they do not intend to seek DSSI, or that if they do they won’t touch the bonds, may help to provide comfort to investors and reduce their risk premium, although markets may be suspicious that that cannot be a credible commitment.

Countries will have to assess whether the cost of being shut out of the debt market may outweigh the immediate benefits of a debt-service suspension, especially when the benefit (in terms of cash flow saving) may be comparatively modest when set against the potential costs (direct and indirect). For some countries, the coupon saving may be relatively low (especially if it is a small single issue), and so may not be worth the trouble. But the cost may be overstated too. If a country had no real intention of returning to the market and being a repeat issuer, the cost wouldn’t be that large either. The cost would be larger for countries with more and bigger bonds; they may stand to benefit more from a payment suspension (more savings), but they may be the ones that would (or should) care more about their reputation and retaining market access.

It is clear that many countries will need access to capital to fund (wider) deficits post-Covid and to refinance existing debts falling due, much of this over 2020-24 given when much frontier issuance took place.

But experience also suggests countries can return to the market more quickly than theory suggests (eg due to factors such as market myopia, search for yield, emergence of new investors), and this can also depend on the nature or cause of default. In these circumstances, an issuer, especially with previously healthy fundamentals and track record, might be able to construct a strong narrative as to why they sought private sector comparability during a one in a 100 year event. Frankly, who's going to argue with that? But ratings can be sticky on the downside. Downgrades can be persistent and ratings can take time to recover.

As far as we know, among in-scope countries, Grenada is the only one that has actively sought debt service suspension on its commercial debt specifically under the auspices of DSSI. The request came ahead of its scheduled coupon payment on 12 May, according to media reports, when principal and interest was due, but was paid anyway, possibly in our view because the request came too close to the payment date. The request may also have been timed to coincide with the Paris Club waiver which was agreed on 18 May. It remains to be seen whether Grenada will seek a payment suspension from bondholders ahead of the next payment date on 12 November now it has more time to coordinate it, or whether it will drop it altogether.

Out of the 73 eligible countries under DSSI, 23 have eurobonds (originally it was 22- see our note here - plus Angola). The total outstanding stock of their foreign bonds is US$67bn on our calculations, with about US$4bn in interest falling due until the end of the year (on an accrued basis) – see Table 1.

There are some other issues: 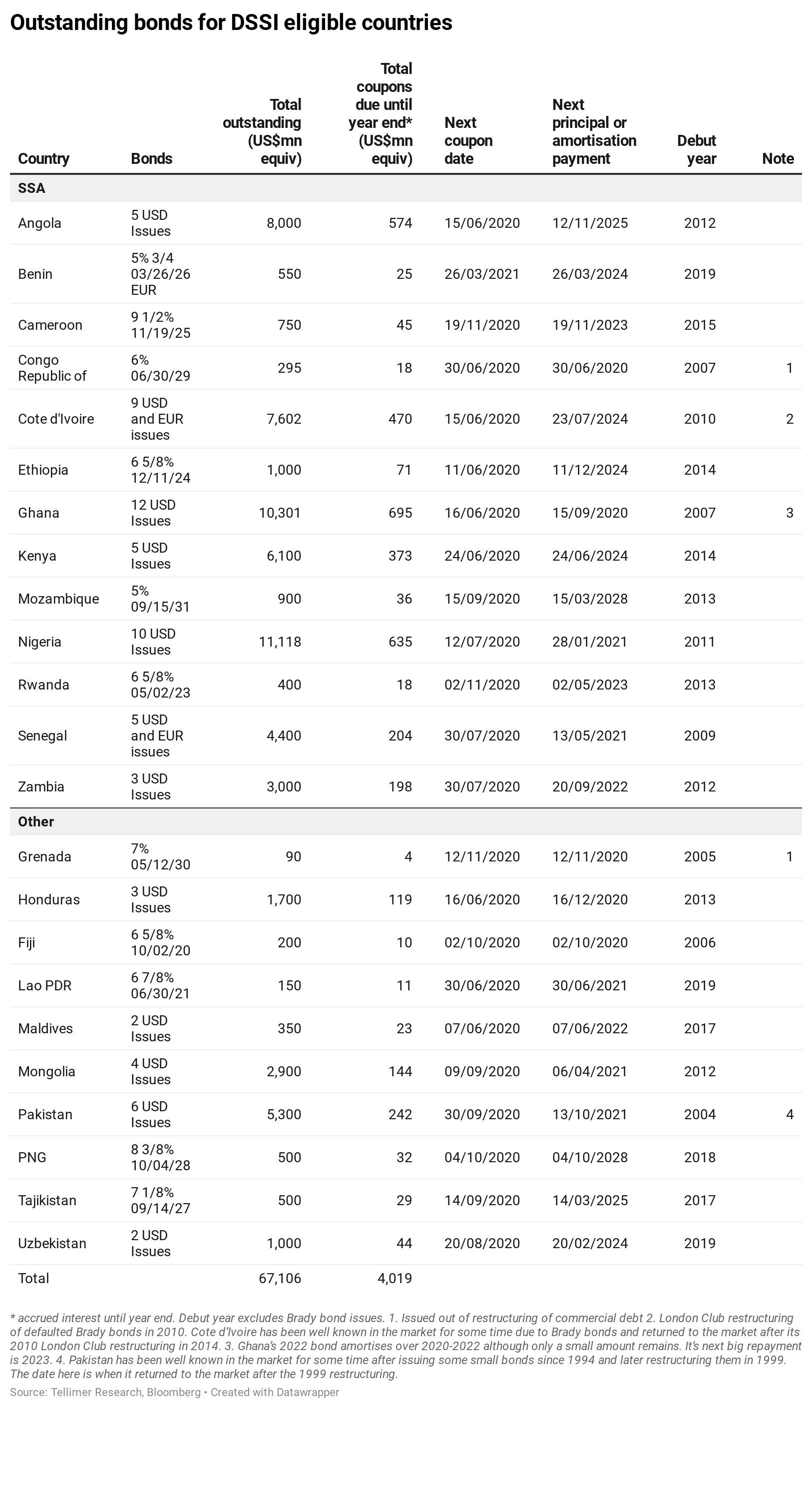