Today will be a heavy data day that will offer more current perspective on the state of the economy on both the consumption and production side through the release of the advanced retail sales, industrial production and the Michigan sentiment data. The combination will likely shape monetary policy expectations for the week ahead. The previews follow.

Consensus estimates suggest that US retail sales dipped in December compared to November last year. However, risks are skewed to the topside for the sales numbers, given that consumer confidence levels remained fairly robust in December as the public shrugged off the Omicron worries. High-frequency data suggests that retail activity remained resilient, with cancelled holiday plans likely resulting in greater consumption of goods. The one factor to consider is vehicle sales, which make up a large portion of the data and will have been affected by the ongoing chip shortage. The headline figure should, therefore, be taken in context as details may show that spending was stronger than what it could initially portray.

The University of Michigan's consumer sentiment index rose to 70.6 in Dec, from 67.4 the prior month and above the preliminary estimate of 70.4 points. The gauge for expectations was revised higher to 68.3 from 67.8, and the current conditions subindex was revised lower to 74.2 from 74.6. Overall, therefore, sentiment improved in Dec, primarily due to significant gains among households with incomes in the bottom third of the distribution. Going forward, confidence and spending are likely to be a bit weaker in January, however it is still too early to know what the broader impact is that the Omicron Variant is going to have.

Africa: The World Health Organisation (WHO) yesterday said that slow vaccine rollouts, rather than a lack of supply, are resulting in low vaccination rates across the continent. More than 340mn vaccine doses have been administered, with 10.1% of the population having had two doses. According to Bloomberg's vaccine tracker, this compares with countries such as Brazil, Japan, Vietnam, Germany, the UK, France, and Italy that have fully vaccinated more than 70% of their populations. WHO further said that the number of Africans being inoculated against Covid-19 needs to climb to 34mn people a week, from 6mn currently, if the least vaccinated continent is to reach the target of 70% of its people fully covered by mid-year. Low vaccine uptake undoubtedly poses a threat to the economic recovery prospects of the African continent, especially as new waves and variants emerge.

Africa: Ghana's vice-president Mahamudu Bawumia yesterday said that the Pan-African Payment and Settlement System is expected to save the continent billions of dollars in annual transaction costs and bolster shipments in the world's largest free-trade zone. Bawumia added the system would facilitate intra-regional trade and payments by enabling the real-time transfer of funds from one African country to another. Traders have, until now, had to settle payments via US and European banks, and the new system is expected to save the continent about $5bn in offshore clearance and transaction costs, according to its developer, the African Export-Import Bank.

South Africa: Not much change to report back on with the ZAR still on the defensive, albeit off its worst levels vs the USD. There does not appear to be any local catalyst for the slight show of resilience other than perhaps some trimming of short USD positions after a relatively sizeable move earlier in the week. The USD, for its part, remains on the defensive, leaving the USD-ZAR vulnerable to a deeper correction through the rest of today and next week.

South Africa: Although breakeven rates, which we use as a proxy for inflation expectations, have edged higher, the recent ZAR strength, weak labour market dynamics and depressed credit growth continue to constrain domestic inflation. The factors mentioned above, together with the measured approach to the Fed policy outlook, could cool down the prospects of the SARB needing to tighten aggressively. They may also see vanilla SA government bonds outperform linkers over the coming months, which will bring breakeven rates down.

Precious metals: The bullish bias in precious metals came to a halt on Thursday after failing to capitalize on the weaker dollar. Investors appear to be booking profits following the lower than expected US PPI data, which moderated inflation expectations. As a result, precious metals exhibited slight declines across the board, with the most significant decline in palladium which lost 1.25%, as it broke out of the sideways trading pattern seen in previous sessions. Meanwhile, gold shed 0.30% to $1820.65/oz after rejecting a move lower to $1812.43/oz. However, the move lower has not persisted this morning, with the yellow metal gaining back all of the previous session’s losses at the time of writing. Other precious metals, silver and platinum, are consolidating in the Asian session.

The Angolan Kwanza (AOA) had a stellar 2021, with the AOA ranked as the second-best performing African currency amongst those tracked by Bloomberg against the USD. For context, the AOA racked up gains of around 17.0%, erasing almost half of 2020’s losses. The bullish bias in the AOA has persisted at the start of 2022, with the AOA up by 3.88% on a month-to-date basis and is currently ranked as the best performing currency on the continent. Underpinning the notable strength last year and in the early stages of 2022 has been factors such as elevated oil prices, a current account surplus, improving fiscal dynamics, which led to positive credit rating actions, and rising foreign exchange reserves. 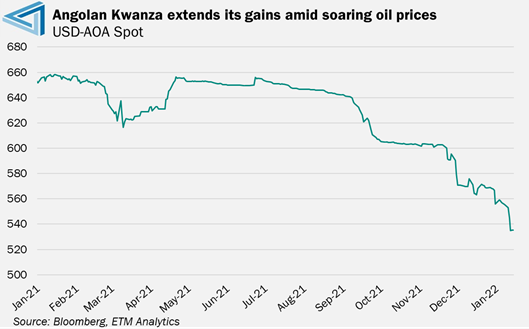 Although the above-mentioned factors have bolstered the AOA bulls, a deepening real rate poses a downside risk to the currency’s resilience. Headline inflation in Angola rose further in December, coming in at 27.03% y/y from 26.98% y/y in the month prior. This was the fastest pace of price growth in the economy since July 2017 and marked the ninth straight month that inflation has risen. On a month-on-month basis, prices climbed 2.1%, driven by higher prices of food and non-alcoholic beverages, alcoholic beverages and tobacco, clothing and footwear and furnishings, household equipment and maintenance.

Inflationary pressures persist in the economy, and the Bank of Angola inflation target of 18% this year suggests that the bank might have to tighten monetary policy further. For now, the continued acceleration in inflation has seen Angola’s real rate (Policy – CPI) move deeper into negative territory to -7.03%. From a currency perspective, this will detract from the resilience shown by the AOA thus far.

Fixed Income: Cost to insure against a sovereign default in Ghana spikes to distressed levels

Ghana remains in the firing line of fiscal hawks as investors judge that re-financing debt in the Eurobond market won't be an option when the Federal Reserve hikes rates and as budget targets remain indefinable. Investors have raised red flags over whether Ghana’s debt levels are sustainable if a significant rise in international lending costs on the back of the Fed tapering shuts it out of the international debt market.

Recall that Ghana has consistently tapped the international debt market in recent years, taking advantage of the favourable lending conditions to finance a chunk of its budget. This puts Ghana amongst the most vulnerable sovereigns to tighter US monetary policy, notwithstanding the country’s strong growth trajectory. Ghanaian Eurobonds have already come under significant selling pressure in recent months as major central banks normalise policy.

Specifically, Ghana’s $27bn in hard currency debt has sold off sharply at the start of the new year, extending last year’s losses. Moreover, Ghana’s 5-year USD credit default swap, which we use as a proxy for default risk, has surged at the start of 2022 as the country moves closer towards a position of fiscal distress. For context, Ghana’s 5-year CDS has risen by 320bps since the start of the new year to sit at 1228bps, levels associated with a country in or near a position of fiscal distress. Note that this time last year, Ghana’s 5-year CDS traded below 400bps. This is a clear indication of the degree of fiscal degradation that has taken place over the past year and the amount of fiscal risk being priced into Ghanaian debt at the moment.

Macroeconomic: News headlines remain bombarded by the Omicron wave for all the wrong reasons

Heading into the weekend and the Omicron wave continues to occupy headlines for all the wrong reasons. It has negatively impacted the US weekly jobless claims data, and scientists are still undecided whether Omicron will be the variant that turns the virus endemic. Some good news from the WHO is that it has approved two new Covid-19 treatments, which add to the arsenal of treatments that can be administered with some success.

Against this virus backdrop, global stocks have come off the boil ahead of the weekend. That might be nothing more than some profit-taking after a relatively good week. There are still many unknowns, and investors prefer to trade cautiously. Furthermore, there is plenty of data out of the US this afternoon that could have market-moving potential, which will keep the USD bears at bay for much of today's trading session.

Key, will be what the data tells us about the underlying strength of the US economy. Whether it does indeed have the resilience to withstand tapering, rate hikes and a balance sheet roll-off this year in the way forecast by the Fed.