Czech Republic: Spolu wins election, will have majority with Pirates/STAN

Spolu, the centre-right coalition of the ODS, the KDU-CSL and TOP 09, won the 2021 Czech general election, according to preliminary results based on a 98.67% sample of polling stations.

The lead of Spolu is only about 24,000 votes (out of 5.3mn votes cast), and according to early projections, ANO will still have one seat more than Spolu. However, these are projections based on preliminary results and they could change when final results are announced.

In any case, Spolu's victory by votes is now certain, even a narrow one. Spolu made the biggest progress in this election, as it performed above what opinion polls said, a range of 20-23%. ANO performed in line with expectations, while the Pirates/STAN coalition underperformed, scoring just about 15.4% of the vote (it was polling in the 17-20% range).

Regarding the rest, the SPD did slightly less than expected, getting 9.7% of the vote, while the KSCM, the CSSD and Prisaha didn't make it to parliament. The first resignation after results have been announced is already a fact, as CSSD president and deputy PM Jan Hamacek said he would step down as party president. The KSCM might face a leadership change as well, since it got only 3.6% of the vote, much less than projected, while Prisaha scored better than both parties, getting 4.7% and just missing entry to parliament. 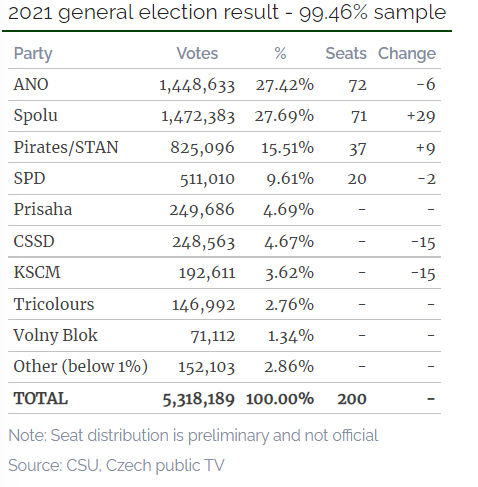 Spolu and Pirates/STAN to command a narrow majority in next parliament, declare readiness to form a government

We expect that talks will not be easy, as the ODS and the Pirates in particular do not trust each other. However, we expect that a compromise will be reached, as both coalitions realise the alternative is much worse. Talks might not be that difficult though, as according to unofficial (and highly anecdotal) evidence, the Pirates will get fewer seats than anticipated, as a lot of voters picked STAN candidates through their preferential votes. We don't have data about the final distribution of seats yet, but it may turn out that STAN has a bigger weight in the coalition. This is positive for talks with Spolu, as the Spolu parties like STAN considerably more than the Pirates.

In the end, we expect that Spolu and Pirates/STAN will form a coalition, and it will hold. It will not be an easy path and we expect that there will be quite a few occasions when the two formations are in conflict. However, we expect that a Spolu-Pirates/STAN government will survive a full term, very similarly to the often dysfunctional relationship of ANO and the CSSD in the outgoing government.

President Zeman not likely to be co-operative, delaying formation of a new government

The biggest obstacle to a government between Spolu and Pirates/STAN will be President Milos Zeman, a close ally of outgoing PM Andrej Babis (ANO). Zeman has stated before that he didn't recognise coalitions as valid political entities, so he will give a PM mandate to the largest single party in the new parliament. This is still going to be ANO, so we expect that Zeman will give Babis a PM mandate again. We see no option for Babis to form a government, especially after Spolu beat ANO by votes and possibly seats. It is possible that ANO and the ODS might be able to form a majority on their own. However, Fiala was very clear about how he wanted a change in government policy, something impossible without ANO.

In the end, Zeman will need to give Spolu and the Pirates/STAN a PM mandate, though we expect he will stall as long as he can. There are no legal deadlines when a PM designate should be appointed. The only deadline is that once a PM designate is appointed, they need to ask parliament for a vote of confidence within 30 days. We expect that Babis will get a PM mandate in November, so a new permanent government will probably be formed in December. This will probably delay the adoption of the 2022 budget bill, as we expect Spolu and Pirates/STAN will want to make a pretty substantial revision. It will be faster if they already have a government, but we doubt Zeman will be accommodating, so the odds are the 2021 budget will be applied for some time in early 2022. We don't see this as a major issue, as the 2021 budget is pretty loose so there won't be a lack of funding. We expect that the 2022 budget law will be passed by the end of January 2022 whatever happens, which won't be a big delay.