Czech Republic: National recovery plan to have low impact before 2025

The Czech Republic's National Recovery and Resilience Plan (NRRP) has set relatively unambitious targets and not a lot of economic impact before 2025, when most of the investment is planned to be deployed, according to the document approved by the government on Monday (May 17). Planned investment is at CZK 199.9bn, out of which CZK 172bn will be covered through EU grants. There is far less clarity about the remaining CZK 27.9bn, however. In the previous version, when investment was planned at CZK 192bn, the remaining CZK 20bn was planned to be raised through loans provided via the EU's Recovery and Resilience Facility. In this version, there is no reference to that, only that it is possible to draw loans or use national co-financing, which reduces clarity about financing.

After all, CZK 28bn is not a small amount, even when spread until 2026, so we expect more elaboration on that part. We suppose that the government is averse to drawing more loans at a time when public debt is growing so fast, as it may reach the point when the debt brake threshold, at 55% of GDP, is reached even sooner than 2025.

The document is not final, as it needs the approval of the European Commission and may be sent back for further elaboration later this year. In addition, we see a lot of uncertainty about the plan's implementation, as a general election is due to take place on Oct 8-9, with a very probably change in power. A new government will very probably want to revise some of the goals, so we see this document as a starting point, rather than a final investment plan.

The NRRP six major pillars, dealing with digital transformation, infrastructure and green transition, education/labour market, institutions & regulations, R&D and healthcare. However, the long-promised ambitious goals about digitalisation and environmental transition do not seem to be present. Digitalisation-related projects represent only 23% of the total, which is within the EC requirements but is far from what has been talked about in the past couple of years, as a national investment plan was in preparation even before the pandemic. There are some projects slapped in areas where we doubt their efficiency, like the modernisation of employment services, which appears to be simply an update of the current system, or developing culture and the creative sector, where projects are relatively vague. We don't see a lot towards setting up a truly digital government, as only 5% of total investment is set aside for that purpose.

The same goes for the green agenda, even though at least on paper, 41% of the investment will go in that direction. However, we see a lot of money set aside through transport infrastructure or building renovation. While we don't dispute that these projects have beneficial environmental effects, they are not something new but simply refurbished existing projects in order to fit the green investment requirements of the EC. Truly innovative environmental projects appear to be just about 8% of total investment, which we see as disappointing and so do a number of Czech environmental organisations.

You can find a detailed breakdown of all projects in the table below: 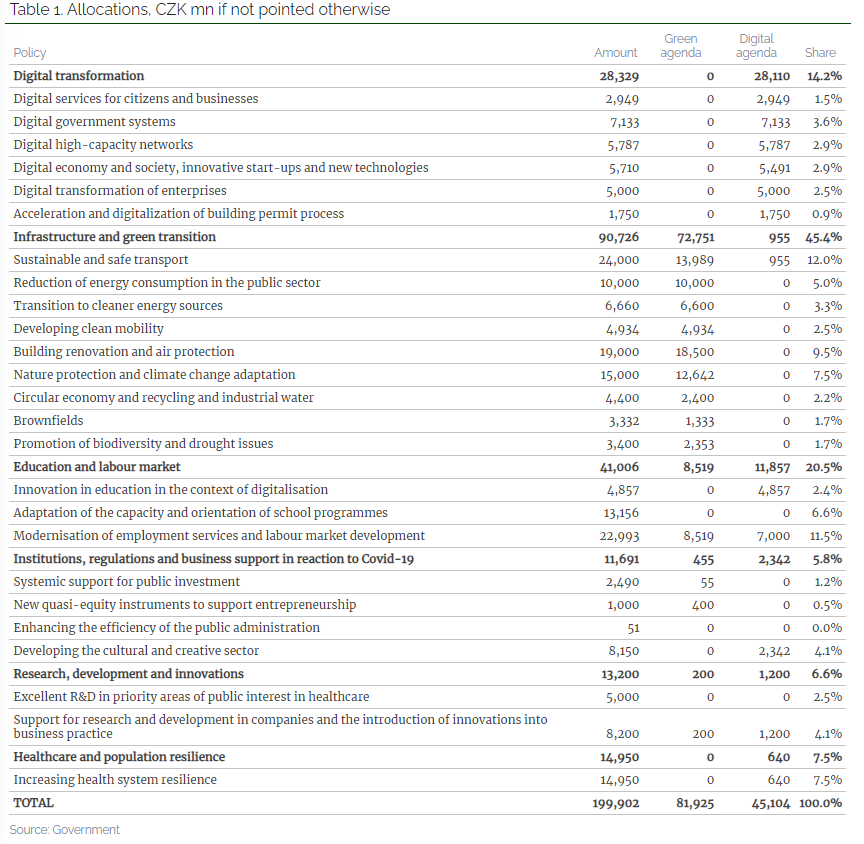 The projected economic impact is expected to be modest at best in the medium run, as GDP growth is projected to accelerate by only 1.3pps by 2024, while employment growth should pick up by 1.4pps over the same period. There is little to no impact projected for 2021, suggesting a lack of preparedness and generally not a lot of interest in these projects. It reinforces our impression that the primary goal is to adjust existing projects in order to meet EC requirements and absorb funding. There is a lot of vagueness in projections, and we find the 11.2pps projected impact on GDP growth by 2040 as unrealistic. It suggests an average annual impact of about 0.5pps, most of it coming after the first five years of investment, which is going to be considerable.

Given that macroeconomic projections are based on the latest Convergence Programme, this suggests that fiscal deficits will remain considerable. It is probably the reason why the government is less eager to draw loans from the Recovery and Resilience Facility, as under no policy change, general government debt is already projected to exceed 55% of GDP in 2025. Given the low impact suggested in the NRRP, we don't believe there will be a big impact on fiscal balances over the period, though slightly faster growth could provide some support on the revenue side. Still, we are not that convinced about the impact of national co-financing, which suggests about CZK 5-6bn additional public investment over the period of the NRRP. Unfortunately, we don't have a lot of details and we expect that the government is just leaving that work for the next administration, whichever it is.

Speaking of the next government, there is no clarity on what makeup it is going to have, which may have a considerable impact on the NRRP and fiscal risk. If the current scenario suggested by opinion polls materialises, it will bring parties that are more fiscally conservative to power. In that case, the NRRP will certainly undergo serious revisions, which is why our assessment of fiscal risk remains mostly preliminary at this point.

We expected more from the NRRP, and judging from initial reactions, so did Czech business and environmental organisations. Our verdict thus far is that the NRRP mostly puts existing projects with a new packaging, hoping to take advantage of the EU's recovery funding. Given the condition the EU is at the moment, however, we are not certain this strategy will fail. We expect similar practice in a lot of other EU members, and given the impact of the Covid-19 pandemic, the EC might be more generous than usual, if only for the sake of leaving the crisis behind. The downside is that we don't see that as very effective, which we consider a missed opportunity.