The Chamber of Deputies adopted the 2021 budget revision through emergency procedure on Thursday evening (Feb 18). The decision went through with the votes of ANO, the CSSD and the KSCM, which decided to back the government after all. There were no defections from ruling parties, so the government preserves its solid support in the Chamber. Since it was an emergency procedure, there will be no more readings of the budget bill and it only needs the signature of President Milos Zeman. FinMin Alena Schillerova commented in the local press that there was no other choice, given current circumstances, though she regretted that fiscal policy will remain so loose.

State government deficit expands to CZK 500bn, no clarity on financing yet

We remind that in line with the revision, the state government budget will see its deficit target expand from CZK 320bn to CZK 500bn. There is no clarity how financing will break down, as the revision bill only gave a single figure for state debt change at CZK 481.2bn (the rest is income from operations with financial assets), as it can be seen from the original document (in Czech only). We expect that this will be eventually elaborated in future finance ministry releases, though judging from what happened in 2020, it may happen as late as with the next quarterly state debt report, which is due to be released on Apr 16. We may see some early signals of a shift in borrowing strategy soon, as the finance ministry has full discretion on changing borrowing ceilings at any time. The next time issuance calendars are published is next Monday (Feb 22), so we may see revisions in quarterly borrowing ceilings, as well as higher issuance plan for March.

There were no changes in the proposal voted by the cabinet on Monday (Feb 15), but we still provide the table that was available then: 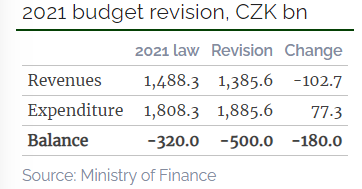 The finance ministry didn't change its macroeconomic projections when compared to its latest forecast, so the 2021 budget is still built on a GDP growth forecast at 3.1% in 2020. The only change is in fiscal indicators. as the finance ministry now expects the general government deficit to expand from 6.6% of GDP to 7.6% of GDP, while general government debt will expand from 43.3% of GDP to 45.0% of GDP (Maastricht criterion). The latter provoked Fiscal Council president Zuzana Zamrazolova to warn that the government could see the debt brake threshold (55% of GDP) reached as early as in 2024.

Revision to accommodate for tax cuts, some additional support envisaged

As it could be seen from the bill, the big change comes on the revenue side, where tax revenues are expected to be lower by CZK 99.6bn than in the original budget law. The biggest decline is undoubtedly through personal income tax, where the revenue projection was revised downwards by CZK 79bn. It comes mostly from the tax cuts adopted in late 2020, though the finance ministry sees some improvement, as the tax cuts are projected to cost CZK 89.5bn. Not so much on the bright side, the finance ministry also expects a reduction in VAT revenue by 3.8% from the original plan, which is primarily due to bigger transfers to local governments from nationally-collected taxes, which were agreed as compensation for the tax cuts. The finance ministry estimates the effect at CZK 14bn, greater than the nominal decline of CZK 11.4bn, so there will be some positive effect from the economic cycle.

Expenditure will grow by CZK 77.3bn, mostly through additional pandemic-related measures. The government has committed not to increase current expenses except in the part related to specific measures. The government is set to provide an additional CZK 37bn as sector support, part of the new scheme launched upon the proposal of industry & transport minister Karel Havlicek. The government also intends to provide an additional CZK 12.2bn to the healthcare system, as well as CZK 7bn for purchase of more vaccines. There are also some additional measures but smaller in magnitude, like more money for child and unemployment benefits.

We consider the budget revision as inevitable, as the original 2021 budget law didn't accommodate for tax cuts. Yet, the latest pandemic developments seem to have triggered an additional need for resources. We are sceptical that this will be the only increase of pandemic-related support, as it appears that problem are piling up. It doesn't help that the government hasn't been very consistent in applying restrictions, as it has effectively suspended its anti-epidemic system over the past couple of weeks. Retail stores will be allowed to open on Monday (Feb 22), but there is already criticism that this is too risky, given how overburdened hospitals currently are. Thus, we feel there may be further revisions in fiscal support and maybe even the 2021 budget law.

Having said that, the government was pretty ineffective in meeting its fiscal commitments in 2020, when it managed to spend only about 55% on pandemic support from what was initially planned. Thus, the same might happen in 2021, though we won't be holding our breath, as 2021 is also an election year. Still, there may be room for some savings out of the about CZK 170bn in pandemic support commitments currently planned. As in 2020, we expect this number to change throughout the year, so take it only as an indicative goal. In any case, we expect that net debt issuance will most likely increase when compared to 2020, as well as debt levels. We do believe fiscal policy will tighten after 2021, no matter what the election outcome is, as ANO will most probably not be able to rule on its own, if it remains in government all. However, there will be consequences and we won't be surprised if borrowing costs grow visibly in the next few months.