Many African countries have benefitted from the global commodity boom since they are net exporters of commodities. The accompanying chart provides a graphical overview of African countries that are benefitting from high commodity prices (red and blue) and those that have been negatively impacted (green). 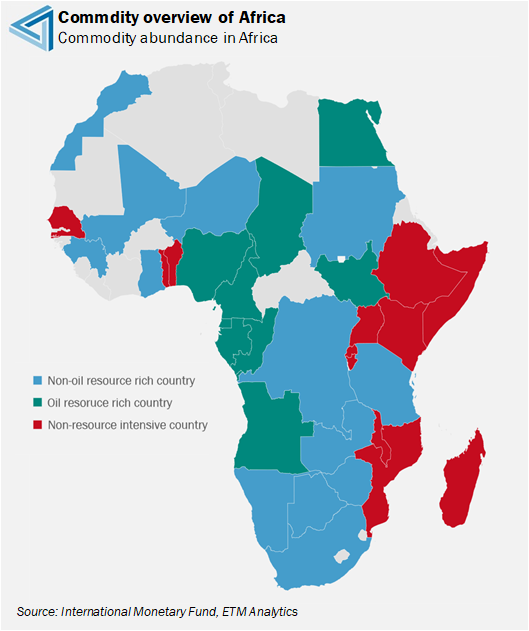 Commodity prices have sky-rocketed over the past 24 months as a perfect storm of rebounding demand and supply pressures hit. Commod-ity prices have risen by almost 90% from pre-pandemic levels, with the Bloomberg Commodity Index, which we use as a proxy for global commodity prices buoyed at its highest level on record.

The Russia-Ukraine war has resulted in global trade decelerations and rising commodity prices, all of which affect countries in the region that are net commodity importers. Countries that are highly dependent on imports from Russia and Ukraine for imports have suffered the most. These countries are highly exposed to the price of cereals, edible oils and fertiliser.

The impact of rising global commodity prices on the trade accounts of African countries is dependent on whether the country is a net im-porter or exporter of commodities. Trade balances have deteriorated in countries that are net oil and food importers, and which lack other commodities to offset the increase in oil and food prices. On the other hand, the trade balances have improved in countries with a diversi-fied basket of commodities. As we have seen in South Africa, high commodity prices have supported SA’s trade account. The favourable trade dynamics have helped underpin the South African Rand’s resilience.

Oil abundant countries in Africa are benefitting from high international oil prices. The biggest beneficiaries are Angola, Nigeria, the Republic of Congo and Gabon. While the high oil prices are supporting the trade accounts of African oil exporters, it is worth pointing out that refining capabilities are limited in these countries, making them net importers of refined fuels. Moreover, there is also a lot of political instability within these countries, which could add to production delays if conflict arises. Nigeria and Angola, Africa’s two largest oil producers, are both struggling to meet their respective OPEC quotas. Both countries are benefitting handsomely from the high international prices, which have resulted in windfall tax revenues and a surge in hard currency inflows.

The spillover effects from the Russia-Ukraine conflict and lockdowns in China have caused massive dislocations in the African currency market.

Egypt and Ghana have arguably suffered the most brutal blow. Dampened demand for metals from China, ongoing supply chain pressures, soaring food and fertilizer prices, and a sharp drop in tourism have significantly impacted the current accounts of African countries and, in turn, the performance of African FX. 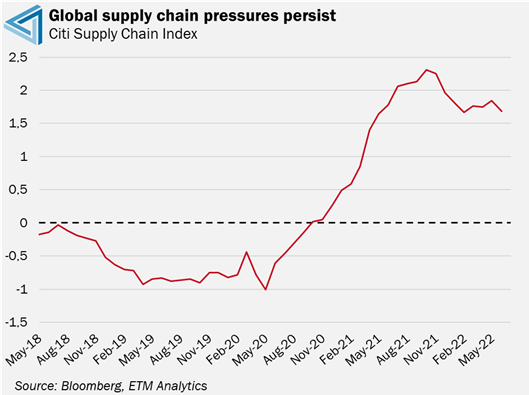 Commodity-exporting countries have benefitted from elevated commodity prices. The Angolan kwanza, South African rand and the Zambian kwacha are some of the African countries that have reaped the rewards from the surge in international oil prices.

SA is a major exporter of metals, agriculture products and coal. The steep rise in metals, softs and coal prices has significantly improved trade terms for countries such as SA. For context, South Africa has run a trade surplus since May 2020, one of the main factors underpinning the resilience of the South African rand. 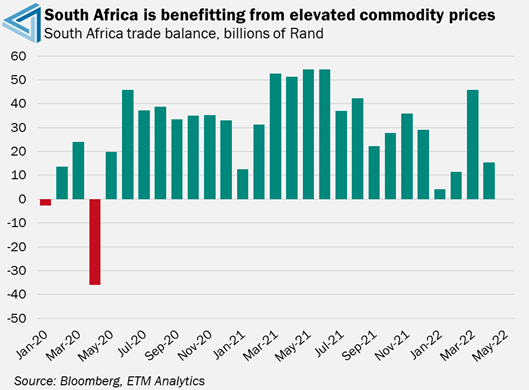 Currencies in countries such as Angola, Algeria, Congo, Egypt, Gabon, Libya, and Nigeria are likely to appreciate as they are major oil exporters, and the current high global oil prices will be supporting their current accounts. However, even though these countries have the ability to produce a lot of oil, it does not necessarily mean that they are currently. Governments need to ensure they are doing everything they can to ensure these oil-producing countries can reap the rewards of these high energy prices.

On the other, the supply chain disruptions, which have driven up commodity prices, together with the prevailing risk-off conditions, have detracted from the current accounts of several African nations, such as Egypt, Kenya, Tanzania and Uganda. This has had a meaningful impact on the currency performances of the countries mentioned above.

Bottom line: Current account dynamics or the balance of payments of a country remains a key driver of currency movements. As such, having a strong grip on current account dynamics will provide traders and investment professionals with valuable insight into the direction of currencies across the African continent. The currencies of countries that are net importers of oil and food are likely to remain under pressure, with commodity prices expected to remain lofty over the next 12 months as supply pressures persist. In contrast, the currencies of commodity-exporting countries should remain resilient as hard currency inflows continue to prop up the current accounts of these countries.