Currency markets in limbo ahead of key risk events today

Out of the US, there is some data for investors to sink their teeth into. The most important will be the inflation print as investors look for guidance on how strongly inflation pressures will manifest. The second is the weekly jobless claims figures, which will update investors on how quickly the labour market is recovering. Although the recent payrolls figures were mildly disappointing, the recovery path remains intact, and investors anticipate a significant tightening in the labour market through H2 2021. Across the Atlantic, we have the ECB rate decision today. The June ECB meeting is shaping up to be a big one, with the central bank likely to make a major announcement regarding its asset purchases. The governing council has been a bit mixed on its views of what should be done, but some recent widening of intra-euro-area spreads suggests that the doves will take the upper hand and announce an extension of the programme.

Kenya: During its presentation of the second supplementary budget, Kenyan Treasury Secretary Ukur Yatani asked lawmakers to approve a 4% increase in expenditure for 12 months ending June 30. The additional funds requested are aimed at covering COVID-19 related expenditure, changes in financing for projects by development partners and adjustments in salaries. Some key takeaways from the second supplementary budget include a rise in Kenya’s total gross expenditure for 2020/21FY from KES 2.92trn to KES 3.03trn. The fiscal deficit, inclusive of grants, is expected to come in at 8.6% of GDP compared to 7.5% of GDP previously. The revenue forecast was reduced from 16.8% of GDP to 16.5% of GDP and government borrowings were raised from 4.4% of GDP to 4.7% of GDP.

South Africa: Although South Africa’s current account surplus narrowed in Q4, it remained elevated and was the second-largest surplus on record. Moreover, SA managed to record an annual surplus for the first time in almost two decades in 2020 as the economy's contraction suppressed import demand, and the value of gold exports rose due to higher prices for the commodity. The trade account remains near a record high as exports continue to be supported by high commodity prices while imports continue to be subdued amid the weak economic recovery. With these dynamics set to remain in place, at least in the near term, SA's trade account and, by extension, the current account will remain supported and thus underpin the ZAR's resilience.

Zimbabwe: Data from the Reserve bank of Zimbabwe showed that earnings from Zimbabweans living abroad have almost doubled so far this year. According to Central Bank Governor John Mangudya, remittances surged from $221.9mn a year ago to $411.1mn in the first four months of 2021. Given that remittances are the second biggest foreign currency earner in the country, the jump will help boost dollar liquidity in the country and support the stability of the Zimbabwean dollar.

Tanzania: The International Monetary Fund (IMF) has urged Tanzania to publish data on the spread of COVID-19 before getting approval for a $574mn emergency loan. Recall that the Tanzanian government stopped publishing coronavirus infections figures in May last year when the then President John Magufuli’s administration played down the threat of the disease. According to the IMF representative in Tanzania, Jens Reinke, the publication of such data would be a precondition of unlocking these funds. Reinke added further that “in order to justify emergency financing in the context of the pandemic, you need to publish relevant public-health data.” The funding will go a long way in easing the pressure facing the government in addressing the country's public health crisis and supporting other vulnerable sectors of the economy.

Nigeria: The Royal Dutch Shell Plc has urged the Nigerian government to pass the long-delayed legislation to reform the petroleum industry. The Petroleum Industry Bill (PIB) has been in the works since 2008, when it was first presented to the parliament. However, the delay in finalising the bill has cast a cloud of uncertainty on the sector over the years. Against this backdrop, the sector has suffered massive investments losses, which are now starting to hurt oil production. Managing director of Shell Nigeria Bayo Ojulari said  that “for every month and every week that we delay, investment is moving somewhere else.” Ojulari added that it is important to pass the PIB, but we collectively need to think about how we implement it to ensure that energy transition does not make the PIB obsolete the day it is passed.

The markets globally are sidelined ahead of the all-important US CPI data and the ECB decision on interest rates today. The US CPI number is of particular importance given all the taper talk of late. Should the number surprise to the topside, we can expect a spike in US Treasuries and a stronger USD which will be negative for emerging market currencies. However, the opposite will hold true should the US CPI number disappoint.

In the background, the US CPI reading will need to be seen against the ECB decision on monetary policy. Should the ECB commit to ultra-loose monetary policy, this could likely give the USD bulls more encouragement. Overall, it appears as though the tide may be swinging mildly back in the USD's favour, at least in the short term. 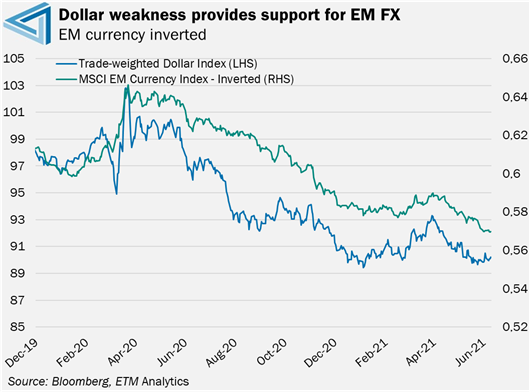 While the USD appears to be finding its footing after coming under stern pressure in recent months, the bullish bias in emerging market FX remains entrenched. This is reflected by the persistent rise in the MSCI Emerging Market Currency Index, which continues to rise (MSCI Index is inverted in the chart – downside move is positive). Note that a resurgent dollar would however undoubtedly come as a headwind for EM FX going forward. Therefore, today will likely pan out to be an extremely important one for the path of global FX going forward.

The focus in the fiscal space was on Angola yesterday after the government said that it has decided to take advantage of the final extension of the G20 Debt Service Suspension Initiative. Angola’s Finance Ministry says in an emailed statement on Wednesday that it has asked its sovereign partners to continue the suspension of the service of its unsecured bilateral debt from July 1 to December 31.

The Finance Ministry said in terms of scope and duration, the extension of the DSSI will provide Angola with additional funds to continue cushioning the devastating impact of the COVID-19 pandemic. On a positive note, the Finance Ministry said that it doesn’t expect the need to engage in further negotiations to restructure its debt profile with creditors beyond those related to the implementation of the DSSI.

This statement was followed by an announcement from the International Monetary Fund that its Executive Board had completed its fifth review of the Extended Fund Facility Arrangement for Angola and that it had approved an immediate disbursement of $722mn. This takes the total disbursements under the arrangement to about $3.9bn. Recall that Angola’s 3-year arrangement was approved by the Executive Board in December 2018. The arrangement was aimed at restoring external and fiscal sustainability, improving governance, and diversifying the economy to promote sustainable, private sector-led economic growth. The IMF said that Angola is transitioning to a gradual recovery from the COVID-19 shock amid higher global oil prices, low levels of reported COVID-19 infections and the start of a vaccination campaign. The effects of the pandemic continue to be felt across the economy and society, however. The IMF noted that Angolan authorities have supported the recovery through sound policies that aim to further stabilise the economy, create opportunities for inclusive growth and protect the most vulnerable in Angolan society. 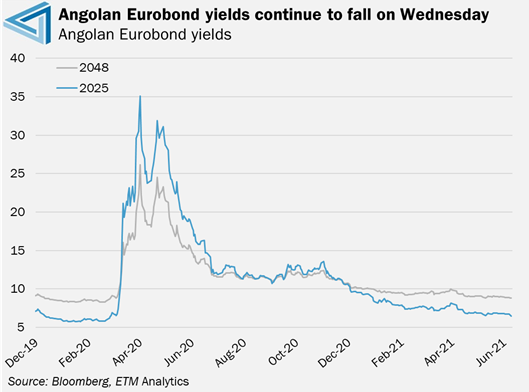 Angolan Eurobonds reacted positively to the developments on the fiscal front yesterday with yields across the curve edging lower. For context, Angola’s 2025 and longer-dated 2048 Eurobond yields both closed the session 6bps lower at 6.47% and 8.77%, levels last seen more than a year ago. Pulling back the lens slightly, while still elevated relative to pre-COVID levels, Angolan Eurobond yields have trended lower over the past year, supported by positive developments on the fiscal front against the backdrop of soaring international oil prices, which has bolstered government revenues and foreign currency earnings. Going forward, while we do see room for a further decline in Angolan Eurobond yields, we expect a significant fiscal premium to remain baked into Angolan sovereign bonds.

Macroeconomic: Consumer price inflation in Ghana slows for a second straight month in May

Headline inflation in Ghana softened for the second straight month in May. Specifically, consumer price inflation decelerated from 8.5% y/y in April to 7.5% y/y in May, beating consensus expectations of a less pronounced drop to 8.3%. The May reading marks the slowest rate of price growth on record since Bloomberg started tracking this time series in 2013. 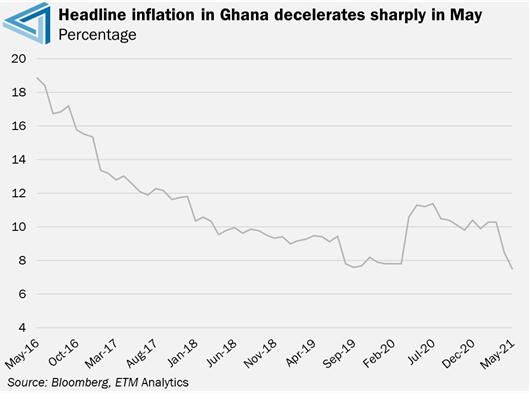 It is worth highlighting that headline inflation has fallen below the midpoint of the Bank of Ghana’s inflation target band of 6% -10%. The sharp pullback in inflation will make the central bank feel vindicated for cutting its benchmark policy rate in support of the economy at its last MPC meeting. Going forward, the marked decline in headline inflation suggests that the central bank will likely maintain its accommodative policy stance in the months ahead as it tries to bolster the pace of economic recovery from the COVID-19 induced slump in 2020.