The adopted by the government state budget for 2023 targeting a deficit of 2.6% of GDP and general government budget deficit of 2.3% of GDP seems rather ambitious, as although the gaps are to be higher than those in the revised 2022 budget, their widening is much smaller than one could have expected given the approved energy and food prices support packages for households and firms in total value of HRK 26bn. Moreover, in view of the rather conservative macroeconomic projections, especially compared to those of the central bank and IFIs, the budget targets may be overrun as the revenues may appear lower, while spending - higher.

Although higher than in estimated for 2022, 2023 budget deficit target seems rather upbeat in view of HRK 26bn support packages. State budget revenues are set at EUR 24.9bn (9.9% higher than the revised 2022 budget revenues) and expenditures at EUR 26.7bn (15.7% higher compared to the revised 2022 budget spending), thus leaving the state budget deficit at EUR 1.89bn or 2.6% of GDP. This would translate to 2.3% of GDP fiscal gap, equal to the earlier announced target along with the adoption of the Draft Budgetary Plan and the 2022 budget revision in late-October.

Next year's tax revenues are projected at EUR 13.3bn, up 4.8% from this year, the pension insurance contributions at EUR 4bn (up by 8.2%) and EU assistance at EUR 5bn (up by 32.8%). The projected tax revenues however do not include the likely to be introduced by the end of the year extra profit tax as its details have not been defined as yet - this is potential positive risk to the budget execution next year, unless the government eventually backs off on its plans in view of the strong criticism on part of the employers, unions, chambers of commerce. The planned EU assistance includes the drawing of EU funds under the National Recovery and Resilience Plan, the EU Solidarity Fund, the 2014-20 programming period and funds from the 2021-27 EU budget.

The EUR 2.1bn higher expenditures projected in 2023 reflect the government spending on securing better welfare and support for those most at risk, securing pension system viability, continuation of demographic measures and post-earthquake reconstruction, the green and energy transition, stronger defence capabilities and security, and solidarity with citizens and businesses in the energy crisis. 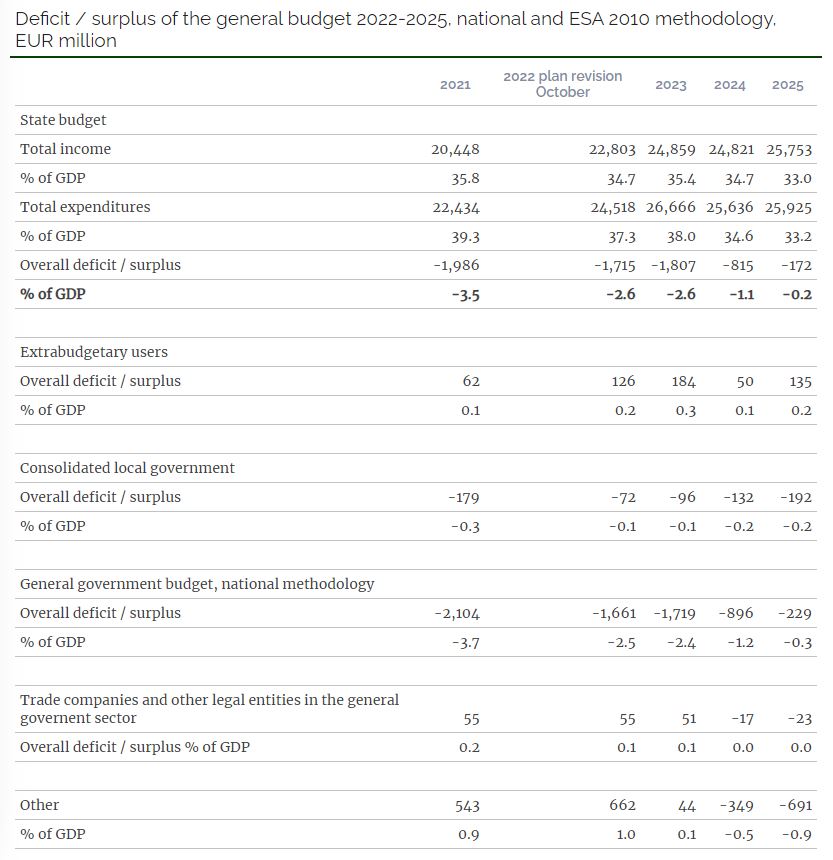 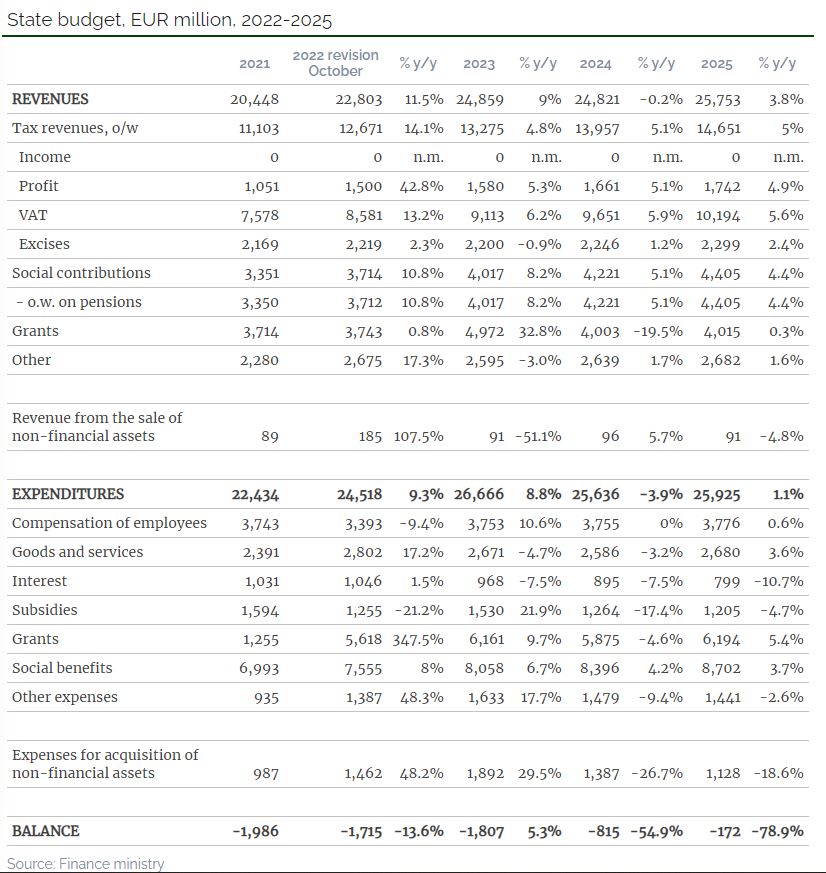 The 2023 budget is geared towards maintaining citizens' standard of living as well as economic growth and development, i.e. to serve the purpose of alleviating the crisis caused by COVID-19, inflation and other threats to citizens' living standards as well as enabling the good functioning of the economy to preserve economic growth and development. At the same time, the government is careful the 2023 budget plan not to be inflationary - by limiting consumption and not exceeding the usual deficit levels, the government will make sure that it does not increase demand, consumption and prices of products and services. The budget contains a strong anti-crisis element with aid to protect those most at risk totalling EUR 643.2mn, whereas EUR 267.8mn for transition grants for an energy-efficient economy, EUR 145.6mn for reimbursement of funds due to price restrictions on electricity, thermal energy and gas, EUR 59.7mn for gas price subsidy for households and small businesses, EUR 33.2mn to support to the fisheries and aquaculture sector, EUR 31.9mn as extraordinary aid to farmers, EUR 26.4mn to increase of the lowest pension by 3%, and EUR 19.9mn to support for compensating the increase in energy prices in the sectors of processing agricultural products.

The government also wants citizens' wages and pensions to continue growing, including pay rise for public sector employees agreed with trade unions. To this end, the spending on wages is increased by EUR 456.7mn, on pensions - by EUR 512.7mn for pension indexation, whereas some EUR 133mn for the new model of family pensions, on social benefits - by EUR 25.6mn, for continued earthquake reconstruction - EUR 270.8mn, nutrition for students in primary schools - EUR 72.2mn, subsidising housing loans - EUR 13.9mn. The government is also continuing its demographic measures by directing EUR 40.4mn to maternity and parental allowances and EUR 14.6mn for fiscal sustainability of kindergartens.

Due to the foreign policy and geo-economic context, the government is to continue to invest in energy supply chain diversification and security, including EUR 75mn investment in building the Zlobin-Bosiljevo gas pipeline and expanding the LNG terminal's capacity. In order to boost resilience, EUR 324.4mn will be invested in defence next year, whereas EUR 261.2mn for purchasing multi-purpose combat aircraft.

At the national level, the fiscal effects of measures to mitigate inflationary pressures on the revenue side (through revenue reduction) are estimated at EUR 223mn and at EUR 355.7mn on the expenditure side. Counting both this year and the next, the fiscal effect of these measures reaches almost EUR 1.3bn - EUR 663.6mn in 2022 and EUR 578.7mn in 2023.

Government debt to fall much faster than expected before

Unlike the presented in mid-October draft budgetary plan, the government now projects much faster reduction of the government debt - to 67.9% of GDP in 2023 from the expected 71.3% this year and further to only slightly above the Maastricht level in 2025. The government plans to borrow EUR 5.5bn in 2023, of which EUR 3.7bn will be used to refinance maturing debt and EUR 1.8bn to cover the planned budget gap. The government however did not specify how much it would borrow via bonds, respectively on the domestic and foreign markets, and how much - via T-bills. The borrowing of extra-budgetary beneficiaries is projected at almost EUR 400mn and the payment for their debt principal amounts to EUR 431.2mn. New financial guarantees for 2023 amount to EUR 1.2bn, including EUR 882.8mn for extra-budgetary beneficiaries. 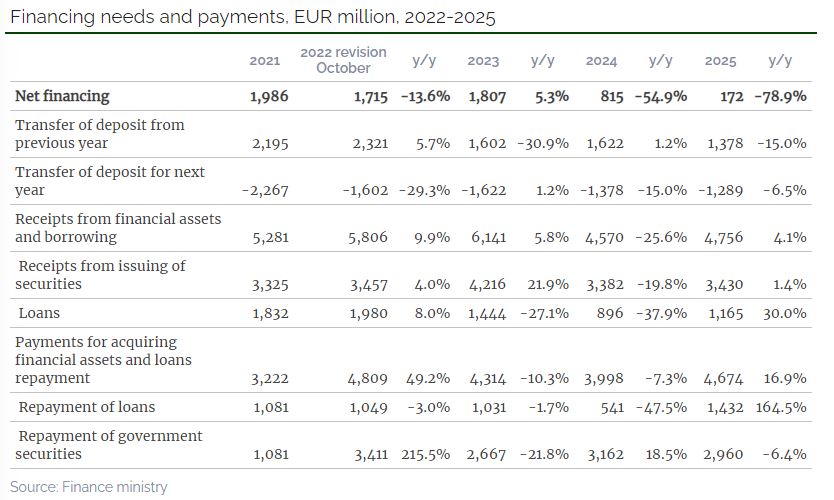 The draft budget is planned under the assumption of 0.7% GDP growth in 2023, which represents a marked easing from 5.7% growth this year, and a conservative forecast as compared to those of the HNB, the EC, the IMF and Fitch Ratings. 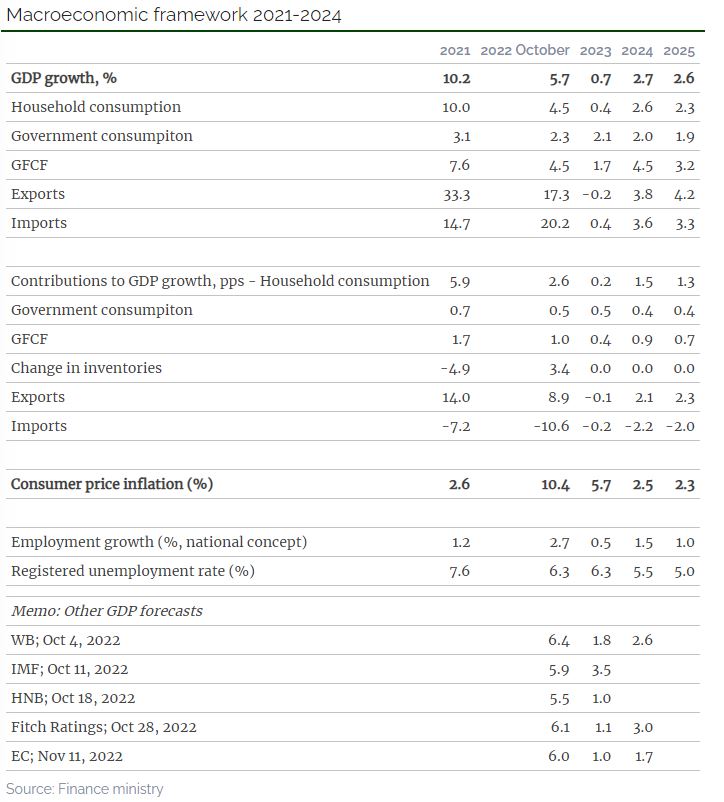 Overall, the budget plan for 2023 is quite ambitious targeting small fiscal target despite the generous spending on support measures amid the energy crisis. A positive risk to the budget execution next year is the introduction of the extra profits tax, which may support even higher CIT revenues. However, the new tax is strongly objected by employers, industrialists and unions in view of the pending recession and the government may eventually back down on the plan. At the same time, some of the projected revenues and expenses does no seem quite realistic in view of the expected macroeconomic developments, meaning that the fiscal target may be overshoot.