There are many words history books will use to describe the events which occurred in 2020, but the one that seems to be the most popular is – unprecedented. 2020 was definitely a challenging year for everyone including the participants of the Croatian capital market. For the first report of 2021, we look back at some of the most significant events on the Croatian equity market.

In 2020, Croatian equity market observed an increase in liquidity, which was mostly caused by the selloff in late February and March coupled with increased trading in April. To be specific, total equity turnover amounted to HRK 2.85bn (EUR 378.5m). This translates into an average daily turnover of EUR 1.45m (+3% YoY). Although we did notice an increase caused by the selloff, we note that the following months mostly experienced lower liquidity. 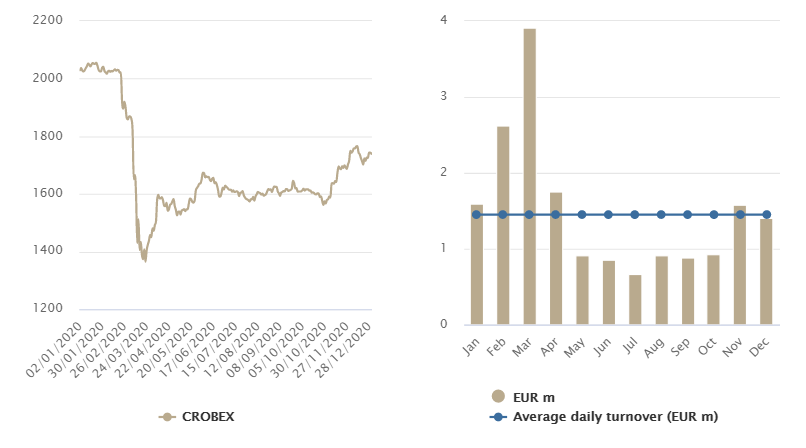 As visible from the graph, CROBEX recorded a sharp decrease of 13.74%, ending the year at 1,739.29 points. It is worth noting that such performance is lower compared to other regional markets (Slovenia, Romania, Serbia), however this can be explained by a high weight of tourism related companies in the main index which underperformed in 2020.

In late February and beginning of March, the market plummeted as investors realised that the outbreak of the pandemic became inevitable. This resulted in some of the best and worst performances of the index in its history. On 12 March CROBEX plummeted, recording a daily decrease of 10.18%. Consequently, after roughly 15 minutes in the trading day, Croatian Financial Services Supervisory Agency (HANFA) temporarily suspended trading on the ZSE until the end of the trading day. Note that the index observed such a sharp daily decrease only once in October of 2008 when CROBEX dropped by 10.2%.

Buying the Dip Proved to be Lucrative

What followed in end March/ beginning of April was almost an uninterrupted positive sentiment on both Croatian and other global equity markets, which was supported by an unprecedented monetary and fiscal stimulus. In the graph below, you can see the share price performance of CROBEX constituents since their respective bottom. As visible from the graph, buying the dip ended up being a very lucrative strategy as 4 index constituents observed a triple-digit increase by the end of the year. Meanwhile, all other constituents observed a double-digit increase. Of the blue chips, Arena Hospitality Group leads the list with an increase of 78.84%, followed by AD Plastik and Valamar Riviera with an increase of 60.6% and 59.1%. Although most shares have not bounced back to their beginning 2020 values, the year still offered more than enough interesting opportunities on the market.

Performance of CROBEX constituents since their respective bottom in 2020 (%) 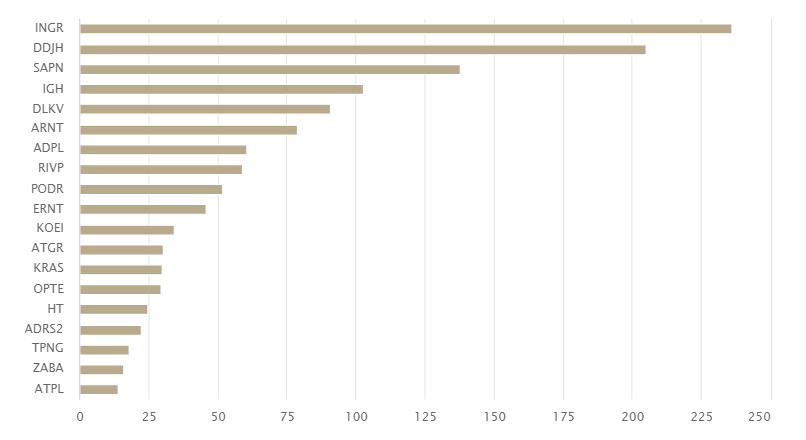 As the Croatian economy is heavily dependent on Tourism (c 20% of GDP), the global lockdown meant significantly lower inflow of tourists in 2020 and therefore a hit to GDP. The immediate worry behind the aforementioned was reflected by the depreciation of HRK to EUR as a market reaction to potential loss of summer season and inflow of foreign currency. However in the meantime the local currency depreciation trend subsided to a certain extent.

In 2020, Croatia witnessed 7.76m arrivals (-62.51%) and a decrease in tourist nights realized by 50%. Although this is a substantial decrease compared to 2019, we note that the result is better than its Mediterranean peers and is better than early estimates.

As a result of the above mentioned, all tourism blue chips recorded a sales decrease of 59% or higher in 9M of 2020. A visible trend among tourism companies was a higher share of revenues from their camping segment which led to somewhat lower ADR’s.

To read about 9M results of all Croatian blue chips click here. (FY results not published yet).

In November, both Moderna and Pfizer announced a very high effectiveness of their Covid-19 vaccine which led to a surge in equities across Europe. To read more about vaccine development and its initial effect on Croatian equities click here.

Despite a challenging year for the Croatian government, Croatia remained in investment grade territory at the end of the year, according to Fitch and S&P.

More specifically, in September S&P affirmed its BBB-/A-3 long- and short-term sovereign credit ratings on Croatia, with the stable outlook. Soon, Fitch affirmed Croatia at BBB-, outlook stable. We note that Moody’s was the only credit rating agency not to put Croatia in investment grade territory as they upgraded Croatia to Ba1, one step below investment grade.

There are a few key reasons behind such ratings. What seemed to be a consensus between credit rating agencies as positive news is the recent entry into Europe’s Exchange Rate Mechanism II (ERM II), the so-called waiting room for euro adoption. To read more about it click here. Besides that, the agencies pointed out the importance of EUR 2bn currency swap line which Croatia obtained with the ECB. To read more about it click here. Furthermore, the agencies believe that net inflows from the EU budget, under various envelopes including Next Generation EU, will meaningfully contribute to Croatia’s economic recovery in 2021-2023.

Mid-November marked what can arguably be considered the most significant event on the ZSE this year, which was the first listing of ETF’s in Croatia. To be specific, InterCapital Asset Management listed two ETF’s – InterCapital CROBEX10tr UCITS ETF (ticker: 7CRO) which replicates CROBEX10tr index, while InterCapital SBI TOP ETF (ticker: 7SLO) replicates SBITOP index. Both mentioned ETF’s are total return ETF’s.

The listings were welcomed with a very solid interest on the market as their turnover amounted to HRK 21.9m. To put things into a perspective, both ETFs have turned over almost their entire market cap in roughly a month and a half. Besides that, for more than two third of trading days, at least one of the ETF’s was among 10 most traded shares.

We note that both ETF’s have ended the year in “green”, while 7SLO observed an increase of as much as 7.2%. To read our serial on ETFS click here.

Information in this report is intended for informative purposes only and does not represent the solicitation to buy or sell any financial instruments or participate in any particular trading strategy. The information contained in this report has been obtained from public sources as well as directly from Companies’ Management. Although we believe our information and price quotes to be reasonably reliable, we do no guarantee their accuracy or completeness. In addition, the price or value of financial instruments described in this report may fluctuate and realize gains or losses. InterCapital Securities Ltd, headquartered in Zagreb, Masarykova 1, does not assume any responsibility for the damage caused by the use of information and projections contained in this report. Opinions expressed in this report constitute current judgment of the author(s) as of the date of this report and are subject to change without notice. InterCapital Securities Ltd uses various methods in Company valuations. Among the rest are comparative analyses of peer companies, discounted cash flow methods and other.

Fundamental analysis is a financial analysis of industries and companies based on factors such as sales, assets, profit, products or services, markets and management. In conducting fundamental analysis, InterCapital Securities Ltd uses various methods to determine a value of the Issuer. Among the rest, analysis of comparable companies, discounted cash flow and other methods are being used. Although InterCapital Securities Ltd uses models commonly accepted in the financial industry and theory, the results of these models depend on plans and information obtained from the Issuer as well as subjective opinions of analysts. The company InterCapital Securities Ltd. acts as a market maker for ADPLRA ZA, PODRRA ZA, HTRA ZA, KOEIRA ZA, ARNTRA ZA, ATGRRA ZA, RIVPRA ZA, ADRSPA ZA, ADRSRA ZA, KRKG SV, ZVTG SV, PETG SV, POSR SV.

Any investments indicated in the report constitute risk, are not readily available in all jurisdictions, can be illiquid and may not be suitable for all investors. Value or income realized on any one investment mentioned in the report may vary. If a financial instrument is denominated in a currency other than an investor's currency, a change in exchange rates may adversely affect the investment. Past performance is not necessarily indicative of future results. Investors must make their own informed investment decisions without depending on this Recommendation. Only investors with sufficient knowledge and expertise in financial dealings who are able to evaluate risk and return may consider investing in any form of securities or markets indicated herein. Before entering into any transaction in financial instruments, please take into consideration you might assume, as a result of transactions in such instruments, financial commitments and other additional obligations, including contingent liabilities, additional to the cost of acquiring the instruments. Investment in financial instrument may assume risks involved in trading such instruments, such as: Market risk (the risk that changes in market prices have adverse effect on financial instrument), Liquidity risk (the risk that an investor cannot easily sell or buy a specific financial instrument at a certain point in time, or is only able to do so on terms that are considerably poorer than the norm in an active market at any time), Interest rate risk (the risk that changes in interest rates have adverse effect on the value of a financial instrument), Currency risk (exchange rates fluctuate and financial instruments that are registered in foreign currency can entail currency risk), Economic risk (risk of economic fluctuations, including risk between countries and different economies, on the value of financial instruments), Country risk (this refers to the economic factors that could have a significant impact on the business environment in the country in which the financial instrument is registered), Counterparty risk (the risk that a counterparty will not meet his contractual obligations in full), Settlement risk (the risk related to a counterparty not meeting the contractual obligations on the settlement date). More specifically, risks associated with shares may involve the following risks: Company risk (in the event of bankruptcy, the shareholder may lose the funds that it originally contributed since priority is not given to shareholders’ claims during bankruptcy proceedings), Price risk (the price of shares may fall and/or rise without it being possible to predict the timing or duration of such fluctuations), Dividend risk (the amount of dividends, if any, which investors receive from their shareholdings, is determined by the profits of the company in question and its dividend policy. Dividend payments may cease should the company suffer losses.) Protection of copyright and data base contained in this Recommendation is of great importance. The report may not be reproduced, distributed or published by any person for any purpose without prior consent given by InterCapital Securities Ltd. Please cite source when quoting. All rights are reserved.