Could China fill the commodity void left by Russia and Ukraine?

This report will reveal how the war between Russia and Ukraine has seen the world starting to look at China to potentially fill some of the supply voids that these two countries are leaving. And will also look at whether China is actually willing to help these countries and how this could result in them becoming an even more dominant player in the global supply chain and having the power to control prices.

Could China fill the wheat void left by Russia and Ukraine?

China has amassed a wealth of commodity stockpiles in recent years and therefore has the potential to help plug some of the global supply shortfalls caused by the Ukraine crisis. With wheat being one of the most impacted markets by the war in Ukraine, we have decided to focus on wheat in this report. China has quietly built up a massive pile of grains in recent years. China’s wheat stocks have nearly doubled from 2014 levels. Data from Bloomberg shows that China has around half of the world’s stockpile of wheat at 142 million metric tons. Therefore, China has the ability to fill the gap being left by Russia and Ukraine. 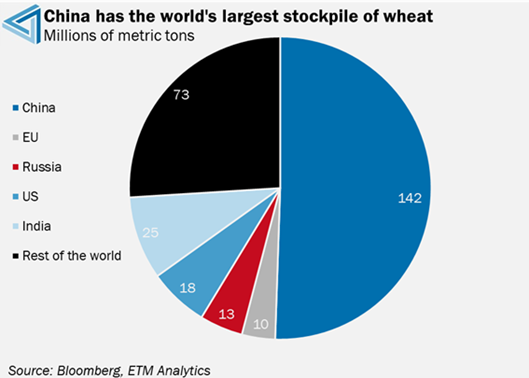 Egypt meanwhile is the world’s biggest wheat importer. Close to half of Egypt’s flour it consumes comes from Russia and Ukraine. Although the government says it has sufficient stockpiles to see it through to the end of the year, it could rapidly become a life-threatening issue if the war drags on and disrupts plantings in Russia and Ukraine.

With the strengthening of the NATO coalition since the start of the Ukraine war, Beijing should have strong interests in cultivating its relationship with Egypt, a country that controls a vital trade route and a pivotal position in the Middle East. For more than a century, the US has used exports of its ample food surpluses as a crucial element of its diplomacy around the world. Right now, China's stockpiles mean it has the larger surplus and is in a position to bolster its international alliances further. This geopolitical crisis could give China even more strength and potentially more power over controlling the price of food globally.

China and Russia’s trade relationship has become more complicated since the war started, raising questions about the future flow of energy, metals, and crops between the two powerhouses. Before the war broke out, Russia’s importance to China as a supplier of raw materials was only growing. China's reliance on Russia has been increasing over the last few years. 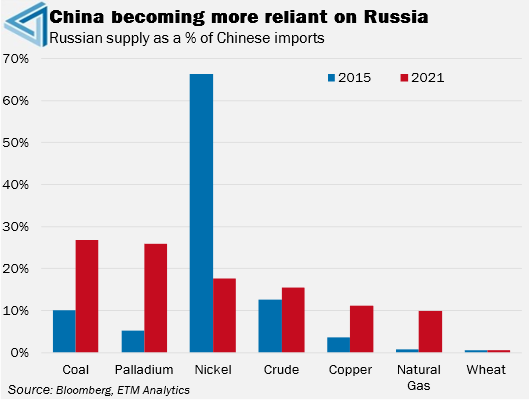 The growth in the Chinese economy means it has an ever-expanding need for coal and gas to heat homes and power factories. Russia is now the second-largest shipper of coal to China after Indonesia. Russian coal has helped fill the gap caused by China’s ban on Australian shipments since late 2020 and more recent disruptions to Mongolia and Indonesia cargo. The US and Australia supply China with a little over half of its imports of liquefied natural gas, which move by ship, and that’s a dependency that Beijing has been trying to break. However, due to potential supply issues from Russia, China may not be able to become as independent as soon as they had hoped.

Impact of the Ukraine war on China

The war in Ukraine is expected to start weighing on China's net trade balance due to softer foreign demand and a higher import bill. China's trade surplus surged to historic highs during the pandemic, but analysts say the war is set to change that. Firstly, the European Union is China's second-largest trading partner, accounting for about 15% of the Asian country's total exports. Statistically, the EU’s economic growth has a high correlation with China's total export growth.

Secondly, China has elevated food security to an economic priority, this has resulted in them becoming largely self-sufficient in staple crops like wheat and rice, but these crops are highly dependent on fertilizer imports. If fertilizer imports from Russia and Ukraine are reduced or interrupted, China’s spring fieldwork could be reduced.

Africa’s sensitivity to China is expected to rise

China has been a major presence in Africa for the last decade and invested close to $3 billion in 2021 alone. This is putting African countries in a difficult spot in terms of where they stand on Russia invading Ukraine. China has tactically condoned the invasion but going forward. The critical question will be how African governments will maintain their relationships with their diverse set of external partners and one another. 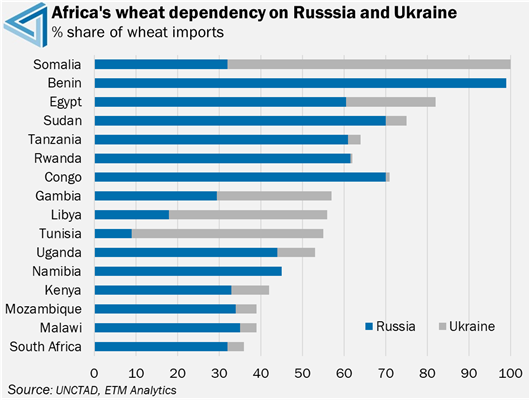 Although some African countries may benefit from a shift in global markets away from Russia due to the crisis, the potential short-term impacts on economic livelihoods are worrying. There is limited scope to replace imports from Russia and Ukraine through intra-Africa trade, as the region's supply of wheat is comparatively small, and many parts of the continent lack efficient transport infrastructure and storage capacity. Africa is extremely sensitive to global developments, and therefore concerns about energy shortages and food insecurity are rising quickly. It is very important to keep a close eye on China over the next few weeks as China is so heavily invested in Africa. Therefore any decisions they make will impact many African countries.

Shanghai is a hub for finance and international business in China. It is also the home to the world’s largest container shipping port. Since the start of this week, they have begun a two-stage lockdown in an attempt to control the country’s worst Covid-19 outbreak. China is the only country in the world that has taken a zero-covid policy position, while the rest of the world is trying to let this virus become endemic. If China's lockdowns continue, we could see some serious trade disruptions across the world due to China being a major supplier of commodity products to a lot of the world. Another concern is increasing bottlenecks at the Chinese ports, therefore, adding to shipping delays and rising shipping costs.

Bottom line: China's stance on Russia’s war in Ukraine over the coming months could reshape global flows of money and trade. Decisions in China, the world's biggest exporter, have the potential to drive sizeable flows of money and goods outside a dollar-dominated system - something Beijing has sought to do for a decade. However, the Yuan hasn’t been taken up as a reserve currency and remains modest. The concern going forward is that if China's relationship with Russia strengthens, then China could be excluded from the Western export market. China is still expected to have a very large presence in Africa for the short to medium term however, with Chinese officials reintroducing lockdown restrictions, there is concern about trade interruptions which could harm Africa due to rising input costs and supply chain pressures.