The note below was originally published as part of our IMF/World Bank Annual Meetings summary note on 27 October. It contains one correction. Bond prices have also been updated.

Cote d’Ivoire has weathered the pandemic well and reassuringly not much has changed since last year's Annual Meetings despite elections.

Real GDP growth fell to 2% in 2020, a significant decline from 6% in 2019, but it was still positive and better than most. A good recovery is expected, with growth of 6% this year, and peaking at 6.5% in 2022, before returning to 6% over the medium term (IMF WEO forecast). This is already a good scenario, given the global environment, although the authorities are even more optimistic, seeing growth over 7%, even 7.5%, over the medium term. This seems unrealistic on current policies, although it was an upside risk if, for example, the authorities could turn some of the measures in the National Development Plan (NDP) into concrete steps. Downside risks are mainly related to the external environment rather than domestic. Election-related tensions have subsided.

Cote d’Ivoire is no longer in an IMF programme after its joint ECF/EFF finished in December 2020, and there seems little interest – or need, at this stage – for a successor programme or unfunded arrangement. This contrasts with some of its main Francophone neighbours, where both Senegal and Cameroon recently secured new IMF programmes (Senegal SBA/SCF approved in June 2021 and Cameroon has a successor arrangement, an ECF/EFF, approved in July 2021). The IMF did however conclude its 2021 Article IV in July (staff report published August).

The main policy challenge concerned fiscal policy and domestic revenue mobilisation (DRM), with the need to increase tax revenue (revenue is around 15% of GDP). It was important for two reasons (which aren’t necessarily unique to Cote d’Ivoire). First, mechanically, it improves the relevant metrics (debt service ratio and revenue/GDP) in the DSA. Second, it will facilitate more social spending and public investment within the same budget constraint. There isn’t the fiscal space over the medium term to finance all the public investment in the government’s NDP. But DRM was also central to the previous programme and this hasn’t resulted in any discernible increase.

In addition, the government has delayed its planned fiscal consolidation by one year due to the emergence of extra spending pressures (pandemic worsening, vaccination programme, extra security spending in the north, and strong public investment in the NDP). The fiscal deficit is projected this year to remain at the same level as last year, at 5.6% of GDP, compared to 2.3% in 2019, and is expected to converge to the 3% WAEMU convergence criteria by 2024, rather than 2023 as planned last year. Still, the rise from 3% pre-Covid to 6% is not a massive deterioration, compared to others, and the authorities have a clear understanding that this is temporary, if not persistent, and of the need to signal a return to the medium-term fiscal trajectory. The IMF seem persuaded that this is reasonable.

Nor does the delay put debt sustainability at risk. Public debt/GDP rose 9pts in 2020, to 48%, and is projected to rise further to 51% over 2022-23, before a gradual decline thereafter. The IMF assesses Cote d’Ivoire to be at moderate risk of debt distress.

There was some discussion about market financing and investor appetite. Cote d’Ivoire (Ba3/BB-/BB-) returned to the market after the pandemic in November 2020 with a EUR1bn 12-year bond priced at 5% and did a tap in February this year (EUR600mn in the new bond and EUR250mn in the 48s). But while Cote d’Ivoire has been an active borrower, in the market about once a year over the last several years, it has not issued like crazy (like Ghana or Egypt). We think this suggests market appetite remains for about US$1-2bn a year without impacting spreads, although current conditions would count against returning at this time.

We upgrade our recommendation from Hold to Buy on the IVYCST 2033s US$, with a yield of 5.5% (z-spread 393bps) as of cob 2 November on Bloomberg (mid-price basis). Prices have fallen about 5pts since the September sell-off, marking a 50bps rise in yield, with a total return YTD of -2.4% compared to -1.8% on the Bloomberg EM Aggregate index. 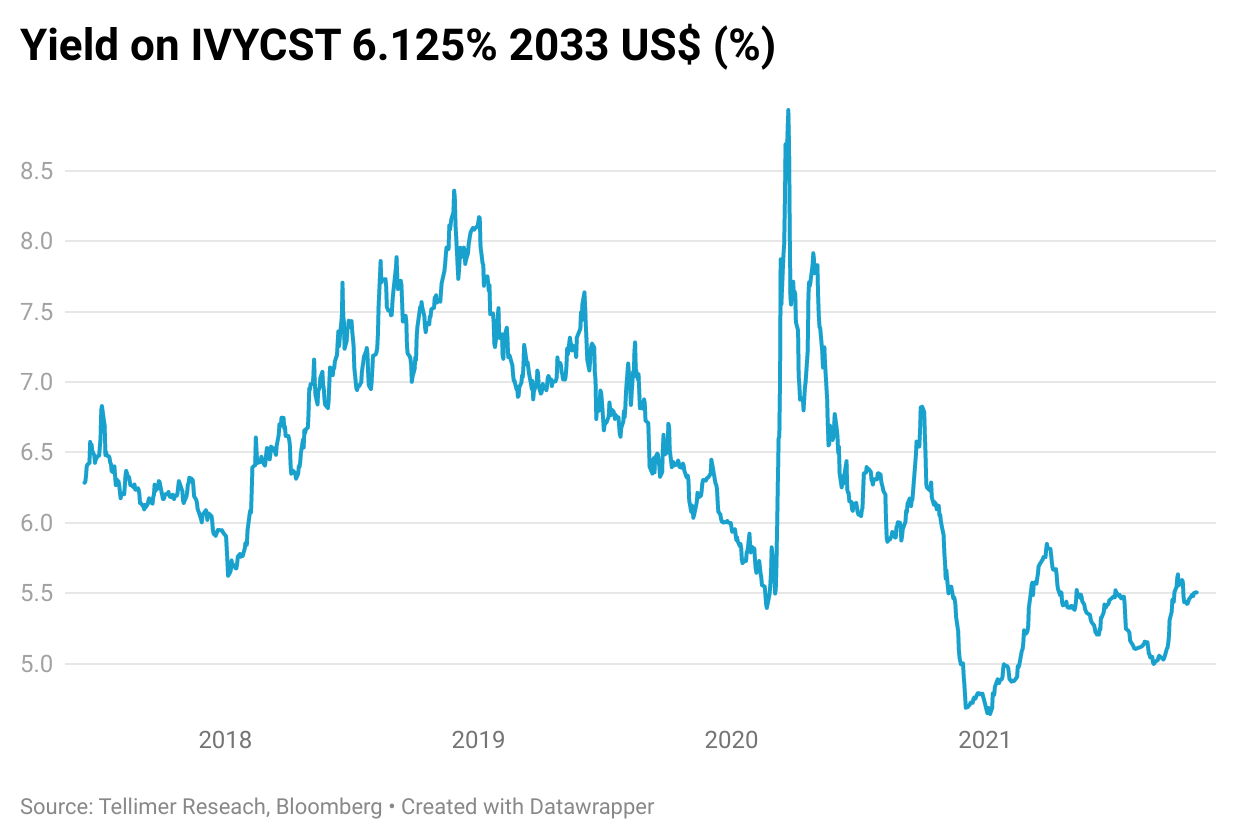