17 May 2022
Published by
Tellimer Research

Despite the war in Ukraine, on the surface, not much has changed since the Annual Meetings last October. Macro-performance has been strong, the fiscal deficit and public debt are manageable, and there has been no change to the risk of debt distress (moderate). Political tensions and security concerns have eased. Cote d’Ivoire should even benefit from higher oil (and other commodity) prices. But higher global interest rates seem to be weighing on the bonds.

The IMF concluded its 2022 Article IV mission for Cote d’Ivoire on 15 April. Domestic revenue mobilisation remained the most important policy issue, while downside risks were seen as being mainly on the external side (Ukraine war, US monetary policy normalisation). Governance, transparency and poverty reduction all still need to improve too. But there were the same upside risks as have been noted before, namely from the successful implementation of the National Development Plan (NDP) and the development of major new oil and gas discoveries by ENI. Either would be a major boost to growth.

The authorities have not requested a new IMF programme. The last arrangement, a joint extended credit facility (ECF)/extended fund facility (EFF), finished in December 2020, and as we remarked at the time of the Annual Meetings, there is little interest, or need, for a successor programme or unfunded arrangement. This contrasts with some of its main Francophone neighbours. Senegal has one (a joint stand-by arrangement/stand-by credit facility and policy coordination instrument, that expires in December). Cameroon has one (a joint ECF/EFF that expires in 2024). And the IMF just announced an SLA on a joint ECF/EFF for Benin.

However, the deterioration in the external environment linked to the war in Ukraine is expected to weigh on the outlook, albeit slower growth this year will counter (to some extent) better-than-expected growth last year. Real GDP growth in 2022 has been revised down to 6%, according to the mission, compared with 6.5% expected in the last Article IV in August 2021. This also marks a slowing from last year’s growth, which reached 7%, according to the mission, after undergoing a number of upward revisions (from 6% in the 2021 Article IV to 6.5% in the WEO to 7% now). Medium-term trend growth is still seen as 6%.

Fiscal performance was also better than expected last year, with the overall deficit coming in 0.5% of GDP lower than projected (5.1% versus 5.6% of GDP). This was due to higher-than-anticipated revenue, reflecting strengthened tax administration and digitalisation efforts. Revenue may therefore have exceeded the 14.5% of GDP projected in 2021 in the WEO.

To that end, the reduction in the number of government ministers following the president's recent cabinet reshuffle (no doubt politically motivated, in our view) may be a good sign of cost-cutting and expenditure rationalisation. It may also help strengthen policy coordination.

The better fiscal performance last year may also help this year, as it gives a bit more space to absorb the global price shock following the war in Ukraine. The overall deficit had been expected to narrow this year to 4.7% of GDP, but there might now be a small deterioration due to higher spending and subsidies, although it is hoped the deficit could still be contained at c5%. The deficit was then expected to narrow further to 3.8% in 2023 and 3% in 2024, as per the WEO. Still, despite potential for a modest deterioration in the deficit this year, the 3% WAEMU deficit target by 2024 remained in reach.

Meanwhile, public debt was projected at 52% of GDP this year in the WEO, little changed from last year, although this represented a 13ppts increase from pre-Covid levels. But the IMF’s DSA assesses Cote d’Ivoire to be at a moderate risk of debt distress.

We maintain our Buy recommendation on Cote d’Ivoire (Ba3/BB-/BB-), with a yield of 7.3% (z-spread 451bps) on the IVYCST 2033 US$ as of cob 2 May on Bloomberg (mid-price basis). We see a country with solid fundamentals and high growth prospects. But the bonds have been on a declining price trend since November (-15pts), even before the war in Ukraine, with yields 200bps higher, and a total return of -11% YTD compared with -13.5% on the Bloomberg EM Aggregate index. The bond price is at its lowest since the depths of the pandemic in Q2 2020 at US$91 (mid). 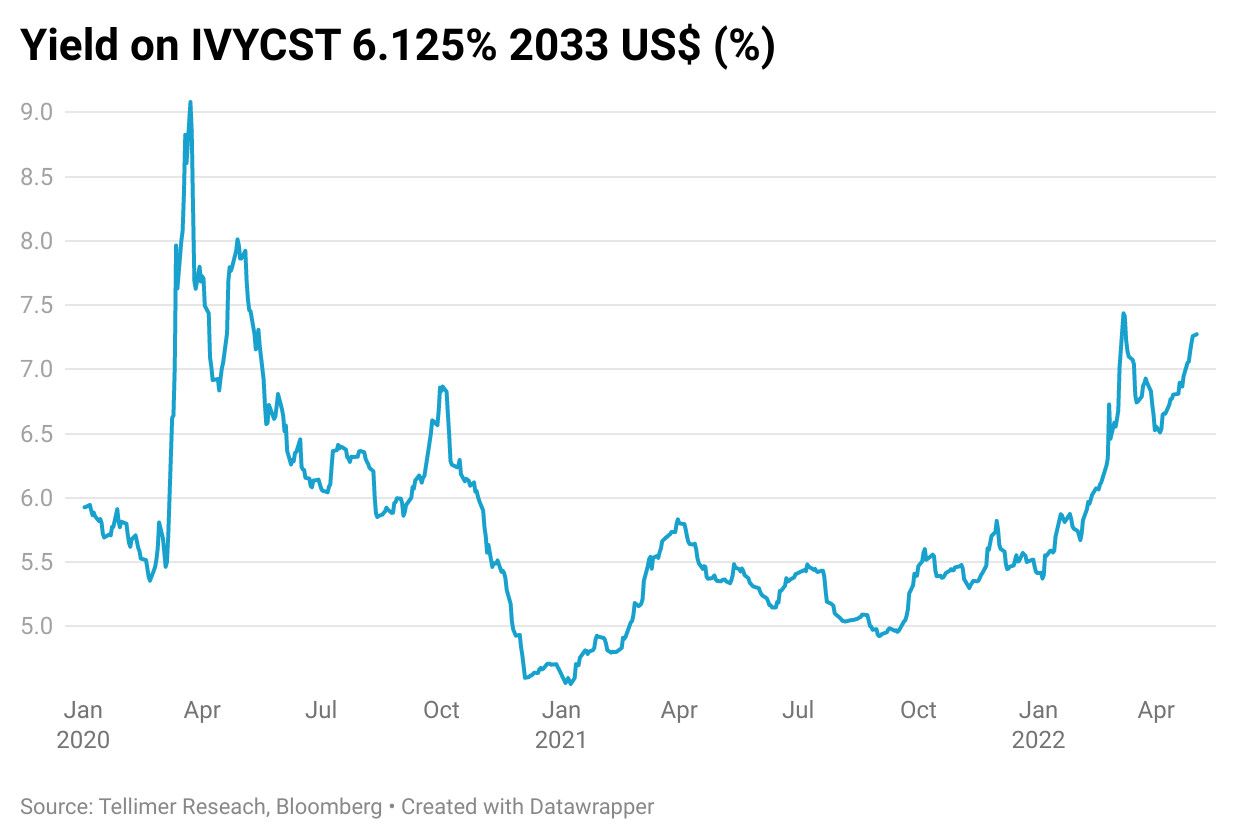