The IMF announced staff-level agreement on a new 3-year Extended Fund Facility (EFF) for an amount of US$1.75bn (c328% of quota) on Friday. The programme seeks to anchor the government's macroeconomic policy and reform agenda as well as provide new financing in light of large financing needs. It is expected to catalyse additional support from bilaterals and multilaterals.

While the IMF statement doesn't reveal much about programme specifics, local media report that the new agreement rules out higher taxes on consumption (eg no increase in VAT) or pensions, and privatisation. Tax measures include a 0.5% tax on luxury houses, and the transfer of a percentage of state enterprises' profits to the treasury over the next four years (estimated to collect 0.2% of GDP pa). A public employment bill to regulate public sector pay is also being discussed. The government will hope this makes the agreement more palatable to the public.

Board agreement on the new programme is expected in coming weeks, although it is not clear from the Fund's press release if there are any prior actions. The programme does however need parliamentary approval. The country's Legislative Assembly must approve the programme by June, according to local media. This might present an important risk to the programme, bearing in mind that it took four months for the assembly to ratify the relatively simple IMF RFI disbursement back in April (parliamentary approval came in August) and the widespread opposition the government encountered to its original programme measures back in October. However, the government message that there is little alternative to an IMF programme, given large fiscal and financing needs, might also focus minds and help to build necessary support for it.

If approved, this will be Costa Rica's first IMF programme in over ten years, the last one being an SBA over the period 2009-10 in the aftermath of the global financial crisis. It also follows recent recourse by other Latin American countries to IMF financing, following Ecuador's EFF programme approved in September and a new contingent credit line (PLL) for Panama announced last week, while Colombia drew on its own contingent credit line (FCL) in December. IMF programme discussions are also underway for Argentina and Suriname.

Costa Rica, as a small open economy, has been hit hard by the Covid-19 pandemic which, according to the Fund's statement, has generated a large (unspecified) financing gap (we await board approval and publication of the board paper to get figures). Costa Rica's goods' exports have fallen, due to the fall in global trade and its position in global supply chains, while the tourism sector has also collapsed due to global travel restrictions. Tourism accounted for c20% of exports and c6% of GDP pre-pandemic. Real GDP growth is projected at -4.9% in 2020, according to the Bloomberg consensus, although recovery is seen this year (the IMF project 2.6% compared to the consensus 2.9%). Real GDP fell by 7% yoy (sa) in Q3 2020, after a decline of 8.6% in Q2.

Still, the IMF commended the authorities for their proactive policy response, which included rapid monetary easing and weakening of the currency. The policy rate was cut by nearly half over the last year, by a cumulative 250bp, while the currency weakened by 7% against the US dollar. The IMF also approved emergency financing in April, with a US$504mn disbursement under the Rapid Financing Initiative (RFI) – see our IMF emergency financing tracker dated 1 May 2020. However, international reserves also fell by 20% as financing conditions tightened and new financing dried up. Reserves currently stand at US$7.3bn.

In particular, the fiscal accounts have come under pressure, with a widening in the overall budget deficit and an increase in public debt. The overall budget deficit reached 8.3% of GDP in 2020 according to latest Ministry of Finance figures, compared to 6.9% in 2019, with the primary deficit widening to 3.5% (higher by 75bp compared to 2019) and an interest bill of 4.8% (+64bp). However, that is still a better result than the 9.7% deficit that the authorities expected at the onset of the pandemic. Public debt rose 11ppts last year to 70% of GDP. 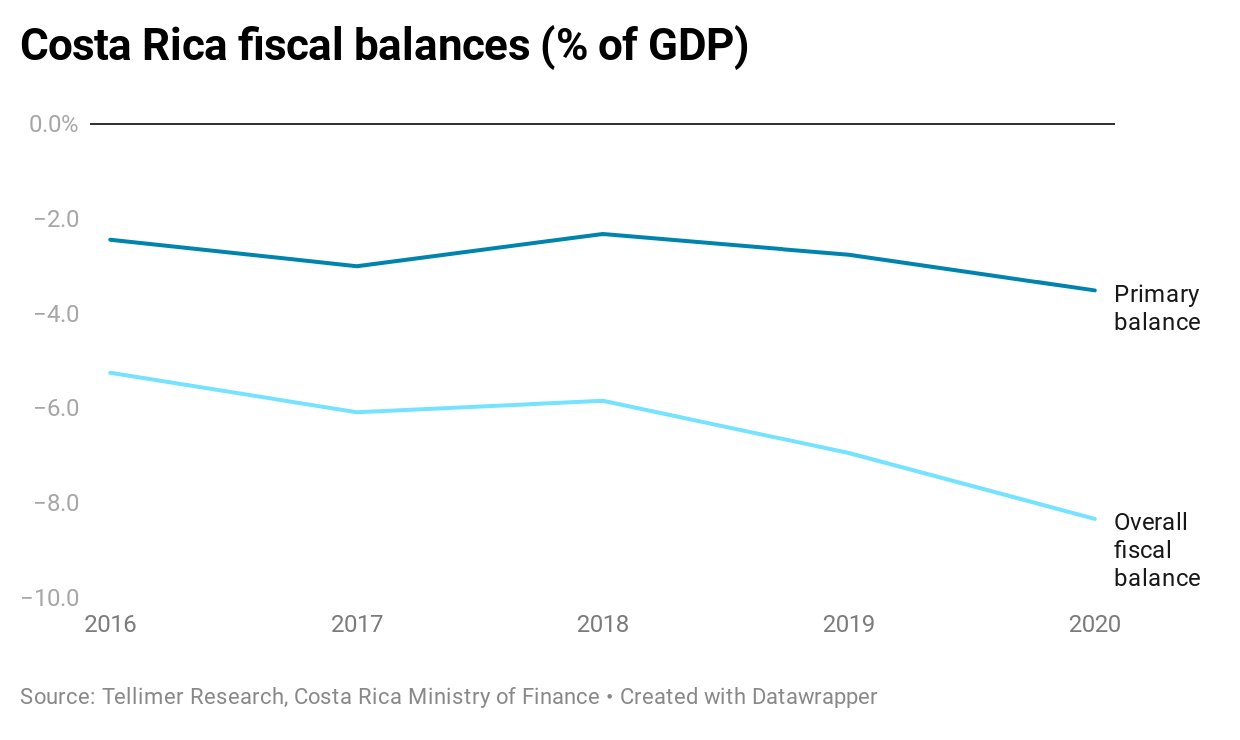 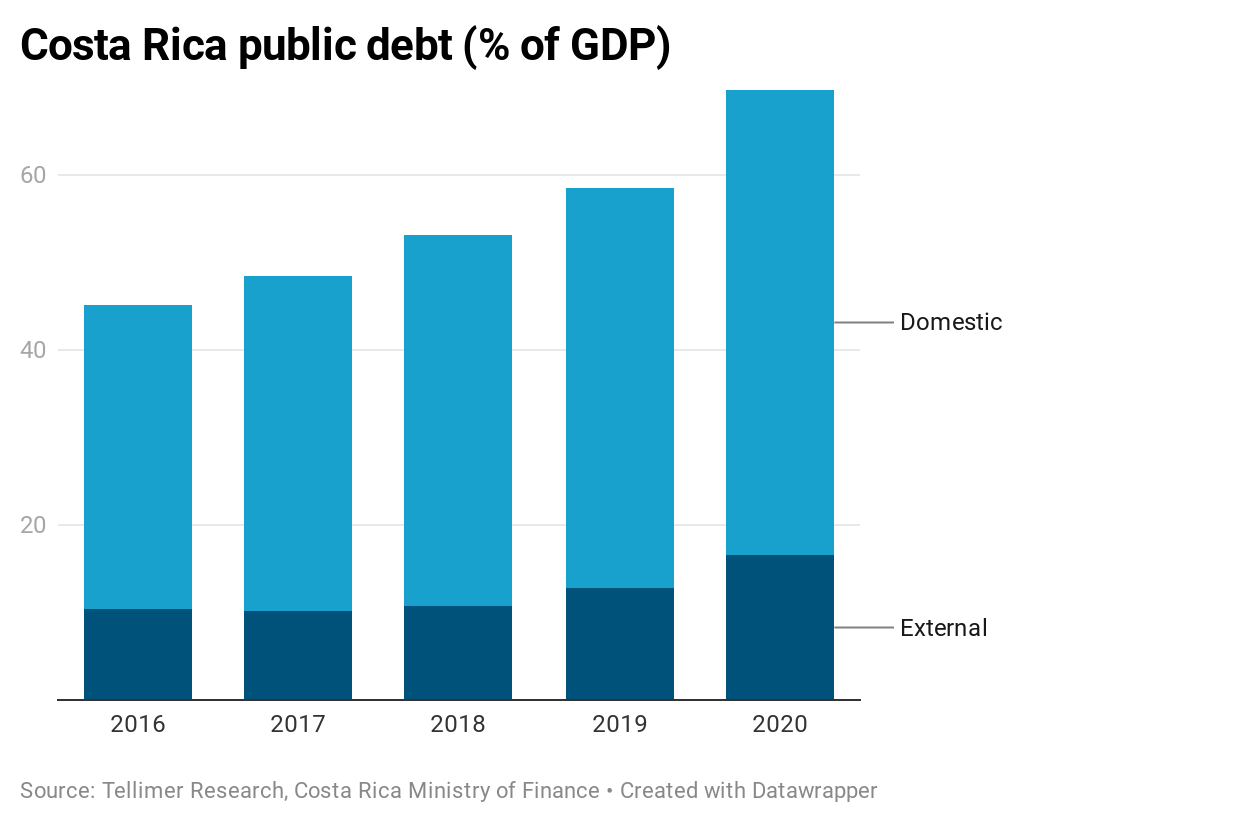 However, fiscal deterioration was evident even before Covid. The fiscal deficit widened from 5.3% of GDP in 2016 to 7% in 2019. The government had already overseen fiscal reforms in 2018, although with somewhat limited success. Additional fiscal consolidation measures were also announced in February 2020 (pre pandemic).

A key programme objective will be to restore debt sustainability, aiming gradually to achieve a primary surplus. The government is aiming for a primary surplus of 1% of GDP by 2023. That suggests a 4.5ppts fiscal adjustment over three years, which doesn't sound particularly ambitious for a country with public debt of 70% of GDP and amid warnings over debt sustainability even before Covid (see our 2021 theme, Fiscal consolidation but not yet). The IMF RFI document projected public debt to peak at 70% of GDP in 2023, so it got there three years early.

Nor does the finance minister's debt/GDP target of 50% by 2035 sound terribly ambitious. Public debt had already risen to close to 60% of GDP in 2019, up by a third in the three years since 2016. And as well as dealing with the primary adjustment, an interest bill of close to 5% of GDP is another source of concern, and the country will have to work towards reducing its debt service costs (eg through lowering domestic interest rates and lengthening maturities, or cheap IFI money). This will depend on implementing a credible fiscal adjustment. Moreover, while three-quarters of public debt is domestic, some 40% of total public debt is in US dollars (or dollar-linked) indicating vulnerability of the debt position to the currency.

We suspect a bigger fiscal adjustment is needed materially to reduce public debt, especially given the deterioration in trend GDP growth, but this may encounter stronger political and public opposition while the authorities may wish to guard against a fiscal consolidation that is growth negative. After all, the fiscal measures proposed in the context of previous programme discussions met with opposition. Moreover, the government is ruling out new taxes which limits its room for manoeuvre.

We assign a Hold on Costa Rica (B2/B/B) US$ global bonds, with a yield (YTC basis) on the COSTAR 6.125% 2031 of 6.0% (z-spread 508bp) on a mid-price basis on 25 January on Bloomberg. The bonds have already jumped 3.5pts on Monday (yield down 50bp) on the announcement of the IMF agreement and are up about 6 points from early last week (c6%), presumably in anticipation of the announcement.

We think further upside is possible in the environment of low for long rates and global liquidity. The bonds are still 90bp wide of their post-issue low of 5.13% in early January 2020, although that was pre-Covid and it is not obvious to us that the bonds should recover to those levels given the deterioration in fundamentals since then. A further 50bp rally in yields (to 5.5%) would imply another 3pts of upside (to a price of 104.4).

The debt service profile on bonded debt is also favourable, while ability to pay looks strong, with the next US$ global bond maturity not until 2023 (US$1bn comes due). Costa Rica has US$5.5bn nominal in outstanding global bonds, paying interest only until 2023 of just US$329mn pa compared to reserves of US$7.3bn. And Costa Rica has time to refinance the 2023 maturity, although legislative barriers to taking on new external debt can prevent market access (Costa Rica last accessed the market in November 2019).

But we suspect that a lot of the good news in anticipation of a long-awaited IMF programme is now in the price. The key issues now will be on timing (securing the programme and the non-trivial task of parliamentary approval), and implementation (and in particular, the fiscal adjustment, especially ahead of the country's next general elections in 2022). 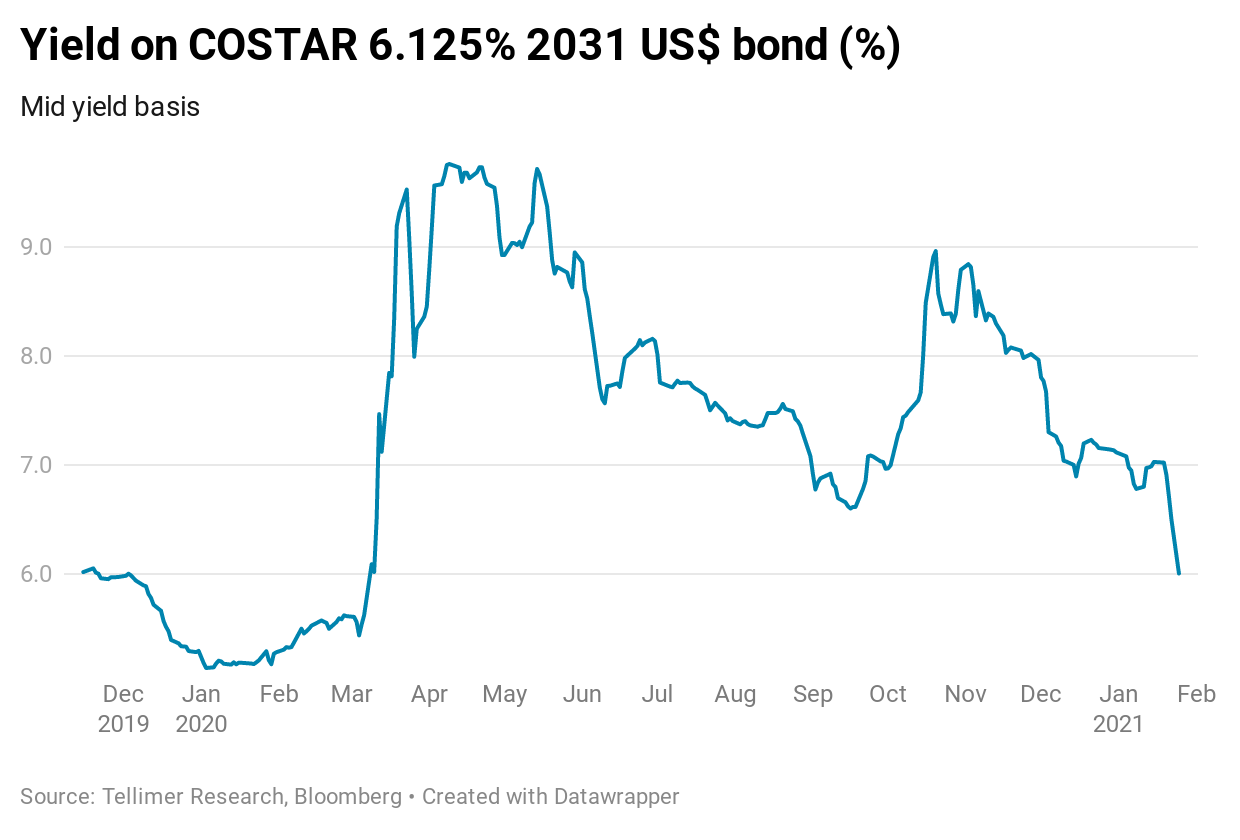