Cost to insure against sovereign default in Africa continues to decline

The spot price of gold closed above $1865.00/oz overnight and the bullish tone has maintained this morning during the Asian session. A weaker USD, lower US Treasuries and concerns surrounding a flare up of COVID-19 in places like Thailand have all underpinned the metal on both a tactical and strategic basis. Pulling back the lens, we see the trend for gold remaining to the topside with the next big technical level being the resistance level at $1880.00/oz which if broken will undoubtedly bring fresh long interest to the party allowing for further gains in due course.  The ultimate goal for gold bulls remains the year to date high at $1959.01/oz achieved at the start of the year. Platinum and Palladium are presently consolidating with investors watching the broader economic backdrop for signs of a contraction in economic dynamism as a result of a surge in COVID-19 cases. Longer term the outlook for the metals remains bullish.

The price of copper advanced this morning during the Asian session as the weaker greenback and improved Chinese premiums drove price action. The Yanghsan copper premium as reported by Reuters spiked by some $1.50 to $38.50/tonne yesterday rising for the first time since February which points to increased demand for imported metal into China. The premium clocked its lowest level since February 2016 on Friday which fuelled concerns about Chinese demand going forward given the high prices.

Shifting the focus to monetary policy, Dallas Fed President Kaplan has indicated that he could see the Fed hiking rates before the end of 2022. That is a long way off and suggests the Fed will not respond at all to the current bout of inflation which it will describe as temporary. It ultimately implies that the USD's value will be debased through this time and unsurprisingly has encouraged the specs to persist with their short USD positions or build on them. The combination of ultra-loose monetary policy coupled with extremely loose fiscal policy means that the balance of risks rests firmly against the USD, which ironically will only compound the inflation episode and raise the stakes in the Fed's policy stance.

Nigeria: Headline inflation in Nigeria slowed for the first time in 20 months in April. Specifically, consumer price inflation decelerated from a more than four-year high of 18.17% y/y in March to 18.12% y/y in April. The marginal drop in annual inflation missed consensus expectations of an increase to 18.8%. Easing food prices underpinned the slight slowdown in headline inflation. Food inflation fell from 22.95% y/y in March to 22.72% y/y in April. This marks the first time food prices have slowed since August 2019. Although headline inflation softened, it remains buoyed above the Central Bank of Nigeria’s 6% to 9% target band, suggesting that policymakers will be under pressure to hike rates.

Kenya: M3 money supply growth in Kenya decelerated for a fourth straight month in March. For context, money supply growth fell from 12.43% y/y in February to 10.10% y/y, its slowest pace of growth since June last year. Although money supply growth softened, it remains elevated compared to levels seen in March 2020. Private sector credit growth also fell in March, slowing from 9.67% y/y in February to 7.65% y/y, its lowest level in more than a year. With both monetary metrics decelerating, Kenya's monetary environment tightened, which should help offset rising inflation pressures emanating from the increase in global commodity prices.

Egypt: A report submitted to the Senate by the Planning Ministry revealed that foreign direct investment into the country is expected to climb to $7bn in the 2021/22 fiscal year compared with $5.4bn in the current year. Tourism revenues are projected to rebound from $2.4bn to $6.0bn as the economy opens further amid vaccination intensification in the coming months. Egypt expects non-oil exports to rise by 10% to $19.5bn in the current fiscal year. It is worth noting that the forecasted improvement in these revenue flows into the country is likely to be dependent on the path of the COVID-19 pandemic, which for now remains highly uncertain.

Botswana: Botswana has joined a few African countries that have discovered the presence of the Indian COVID-19 variant. The Health Ministry reported two cases of coronavirus variant yesterday, and the contacts were quickly transferred to quarantine. This discovery of the Indian variant comes 2 weeks after the government had implemented restrictions on travellers from India, requiring a 10 day quarantine and testing before release. The presence of the variant could likely result in the government tightening restrictions, which could negatively affect economic recovery.

Ethiopia: The Ethiopian government restored access to online platforms after a brief outage. According to the NetBlocks, access was restricted to platforms including Facebook, Instagram and WhatsApp earlier yesterday. The reason for the restrictions remains unknown. Recently some African governments have been using this measure as a way to suppress criticism. This restriction to the online platforms is likely to affect the development of the digital sector negatively. Recall last year the government imposed at least four internet outages, including a countrywide shutdown that lasted two weeks, drawing criticism from advocacy groups including Human Rights Watch.

Ghana: The Bank of Ghana, on its website, reported that the monetary policy committee meeting that takes place prior to the policy rate decision announcement was moved to between May 26 to 28, and the actual rate decision was moved from May 24 to May 31.

Forex: Speculators at their most bullish on the South African rand since March

Bullish South African rand (ZAR) speculators gained the upper hand during the week ending May 11, with the currency’s net speculative position rising to $0.20bn, a $0.04bn increase from the week prior, according to the latest CFTC data. This is the most bullish the non-commercial futures market has been on the ZAR since the start of March, and keeps the recent bullish trend going.

In other major moves for the period, the USD’s net position weakened further to -$15.85bn as speculators continued to rotate back into its developed-market peers. The EUR, GBP, and CAD were the major recipients of this, with these three currencies holding robust net long positions against the USD.

On balance, the short squeeze on the USD seen at the start of the year is reversing, suggesting that a new phase of USD weakness is looming. This may see speculators turn even more bullish on the ZAR in the coming weeks, supporting the currency in the spot market. The near-term outlook remains bullish for the ZAR. However, longer term prospects a gloomy. Therefore, investors should utilise the current period of ZAR strength to position themselves offshore.

Fixed Income: Cost to insure against sovereign default in Africa falls to near pre-crisis levels

African credit default swaps (CDS), which is effectively the cost to insure against sovereign default, have continued to trend lower this month even as fiscal risks in the region remain elevated. The marked drop in African USD CDSs has been a function of improved global risk sentiment and appetite for higher-yielding assets, underpinned by vaccine optimism and the massive amount of dollar liquidity in circulation.

Zambia is an exception to the broader narrative with the country already technically in default after failing to make one of its interest payments at the end of last year. CDSs in Angola, Kenya, Nigeria and South Africa have all continued to trend lower in recent months despite the lingering idiosyncratic risks and adverse impact of the COVID-19 pandemic on fiscal dynamics on the continent. Since this time last year, Angola’s 5-year CDS has compressed by 1875bps to sit at 562bps at the time of writing. Kenya, Nigeria and South Africa’s 5-year CDSs meanwhile have fallen by 477bps, 470bps and 178bps to trade at 248bps, 337bps and 200bps, levels not seen since March last year when the COVID-19 pandemic first erupted.

Looking ahead, while global inflation concerns continue to rise amid soaring food and commodity prices and rising inflation expectations, major central banks such as the Federal Reserve remain committed to looser for longer monetary policy. Moreover, lawmakers in developed market economies remain committed to supporting their respective economies through fiscal stimulus. Both of which continue to buoy global money supply and in return bolster demand for high yielding African debt. Therefore, we expect African CDSs to remain relatively anchored compared to the levels seen over the past year.

Macroeconomic: Kenyan shilling reverses some of its recent gains

The Kenyan shilling (KES) extended its losing streak to a fifth consecutive session on Monday. The rise in risk aversion, political uncertainty and debt vulnerabilities are some of the main factors weighing on the KES over the past couple of days. The sell-off comes on the back of a marked recovery in the KES in recent weeks, with the shilling strengthening to 106.56 on May 10, its strongest level since July 2020. 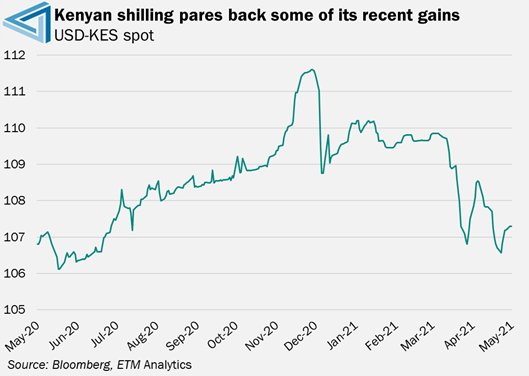 Notwithstanding the recent depreciation in the KES, the broader bias in the shilling remains bullish. For context, the KES has appreciated by 1.86% against the greenback on a quarter-to-date basis. The notable appreciation in the KES in Q2 has been underpinned by strong remittance flows, the country’s largest foreign currency earner. Foreign remittances rose for the second straight month in April. For context, growth in remittances accelerated from 27% y/y in March to 44% y/y in April, its most robust pace of growth in more than two years. It must however be noted that there are low base effects that must be taken into account.

Looking ahead, additional support for the KES is likely to come from inflows from multilateral lenders. The International Monetary Fund (IMF), in its recent Staff-Level Agreement on the First Review of the Extended Fund Facility and Extended Credit Facility, announced that Kenya would have access to $410mn in the coming weeks. The funds will bolster dollar liquidity in the country. Inflows from the agriculture and horticulture exports will offer the KES a helping hand in the sessions ahead.