I always write the three bullets at the top of weekend reading last, so I start writing by filling in the bullets as Blah, Blah and Blah. Now I’ll always think about Greta Thunberg when I start writing!

A week on from the close of festivities in Glasgow, I want to look at some of the winners and losers and why COP26 may not have been the most important thing that happened to the climate this autumn.

Who won and who lost?

Technology beats hair shirts: Why the most important climate successes this autumn weren’t in Glasgow

On 23 September, a group of scientists at the Chinese Academy of Sciences’ Tianjin Institute of Industrial Biotechnology published a remarkable paper in Science outlining an anabolic pathway for efficiently converting carbon dioxide and hydrogen to starch, with no plants required, just plenty of electricity.

Then, on 3 November, a group of scientists at ETH and a number of other Swiss and German institutions published a remarkable paper in Nature demonstrating the operation of a solar reactor that produces synthetic fuels from carbon dioxide and hydrogen.

Indeed, there is plenty of excess electricity that needs to be absorbed to ensure grid stability, and now we can put it to work converting CO2 into useful products. I would argue that these innovations are more important than the results of COP26 itself. In August, I had no idea what we would do with all the excess CO2 in the atmosphere. Now I know.

Bottom-up beats top-down: Why we should expect a green political wave leading to European carbon tariffs

The remarkable thing about COP26 wasn’t what happened in the convention hall. Every G20 government failed to meet its Paris Agreement targets, and the promises and platitudes produced at Glasgow were anything but remarkable. Rather, the remarkable thing was how much wider the movement around COP26 was in comparison to previous conventions. Even if the top-down political process is not accelerating, the bottom-up social process is. Companies, asset managers and governments need to be ready to respond to customers’, shareholders’ and citizens’ much higher expectations for climate action.

We have already seen the rise of green parties across Europe, and one can easily imagine that it won’t be long before an alliance of green parties disappointed with global climate action and labour unions seeking to safeguard European jobs leads the EU to impose carbon tariffs at its border. The Global Greens Congress in South Korea in 2023 will be an important event to watch. 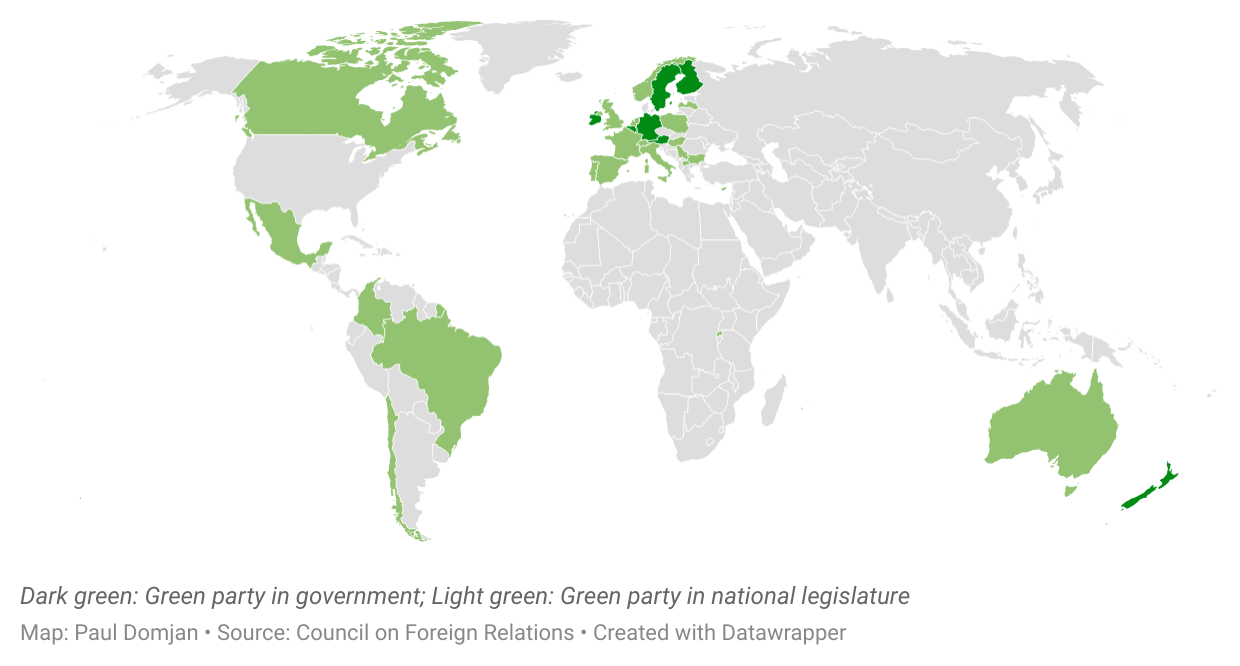 Every economist or investor I know thinks that we should have a global carbon tax. COP26 showed once again that we aren’t going to get one. Not only does that support my view that we will see carbon tariffs sooner rather than later, but it is yet another example of how top-down policies, even the most economically rational ones, are often politically untenable.

By contrast, while developed countries continue to fall short of their Paris commitment to provide US$100bn of annual climate finance to developing countries, the new Glasgow Financial Alliance for Net Zero has promised US$130tn in private capital. Although the majority of that money will go to developed markets, it shows how bottom-up pressure is moving the financial community even without a strong top-down policy framework.

Hydrogen beats biofuels and CCS: Hydrogen is now the clear leader in the contest to decarbonise heavy industry and transport

It is increasingly clear that electrification cannot do everything. Heavy transport and heavy industry are difficult, if not impossible to electrify. For many years, we’ve expected that these difficult decarbonisation use cases will use a combination of biofuels and carbon capture and storage (CCS).

Biofuels were seen as the solution for heavy transport, where CO2 emissions cannot be captured, while fossil fuels with CCS appeared to be better suited for industry, where large, fixed emissions could be captured and stored. Both technologies have proved more difficult to implement and scale than anticipated.

It was clear at COP26 that the focus has shifted to hydrogen as an alternative whose time has come. 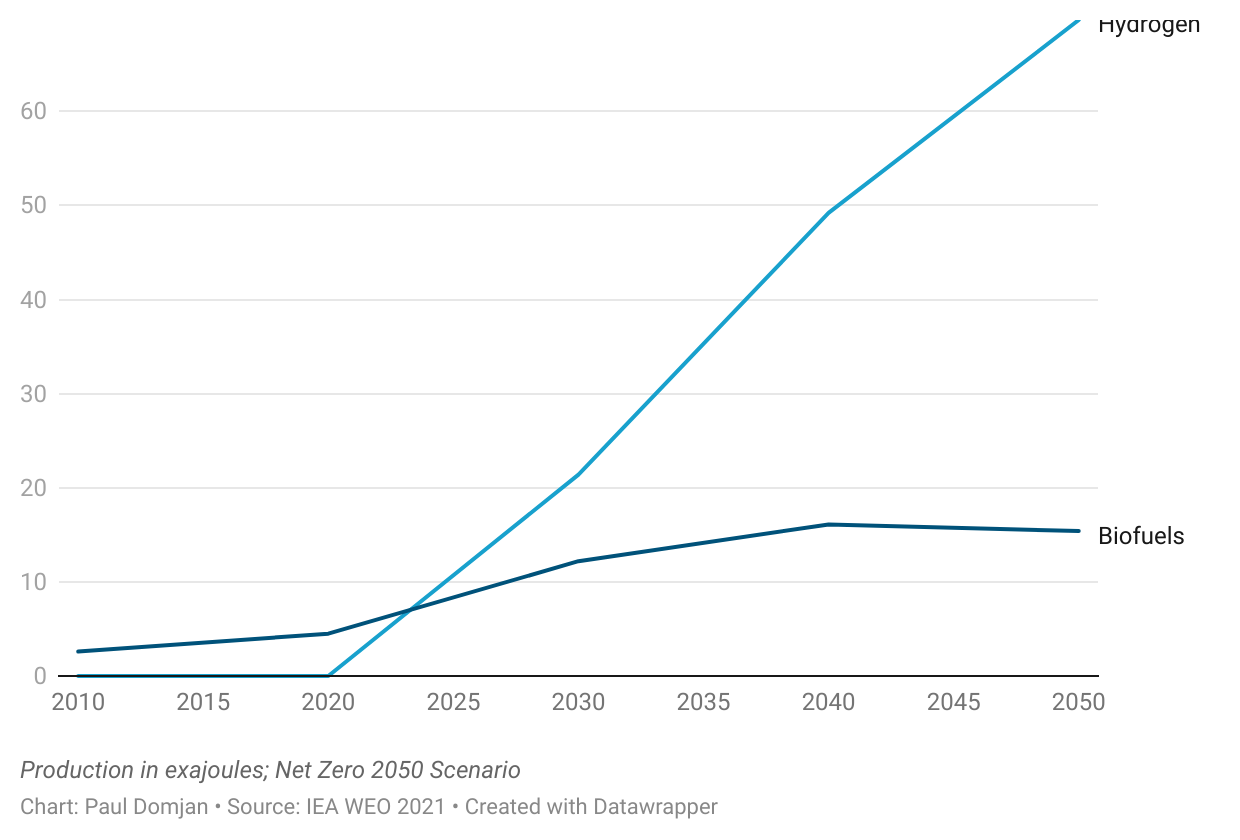 In 2019, only three countries had national hydrogen strategies. Now 17 do, and 20 more have strategies in the works. Crucially, many of these strategies include standards for the carbon content of hydrogen to differentiate genuinely zero carbon green hydrogen from fossil fuel-derived black, grey and blue variants.

Unless commercialisation of direct production of synthetic fuels discussed in my first point proceeds much faster than I could imagine, hydrogen will be the primary solution for many difficult decarbonisation cases.

Figure 3: Selected countries that have adopted or are in the process of adopting national hydrogen strategies and related policies 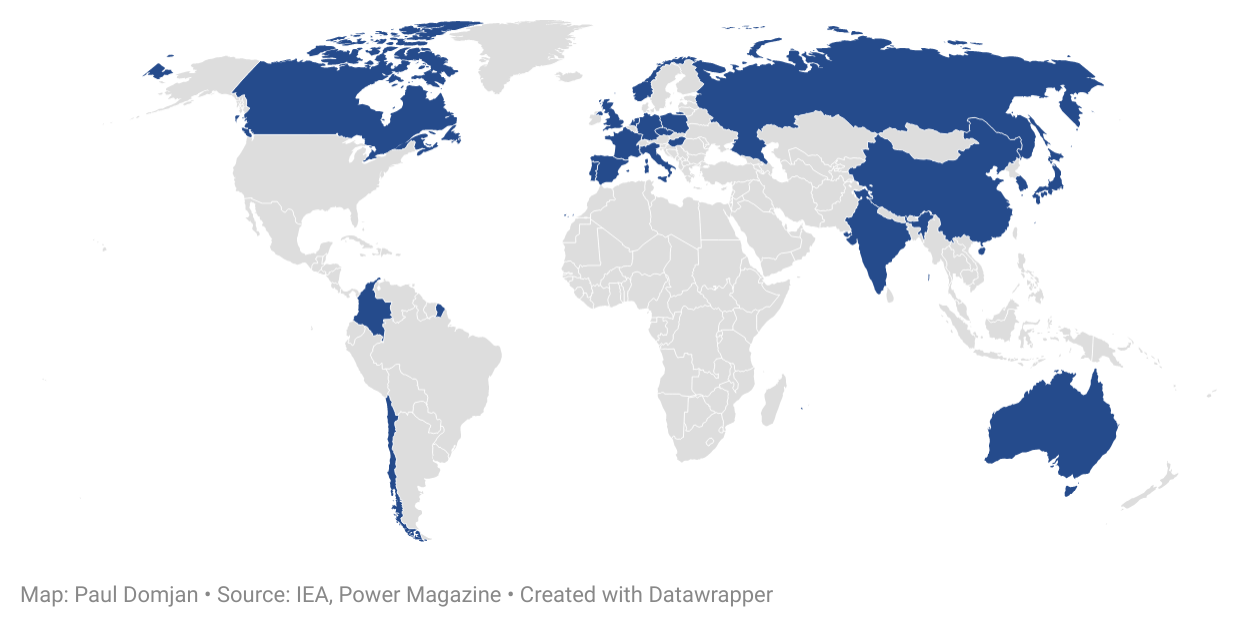 The great disappointment of COP26 was that the final declaration was watered down from a commitment to phase out coal to a commitment to phase down coal. We used to think that natural gas, which emits less than half the carbon of coal as well as much less local air pollution, would replace thermal coal and then renewables would replace natural gas. While this transition is happening in the US, with its ample domestic suppliers of natural gas, hopes that natural gas would be endorsed as a bridging fuel globally have now been dashed.

Figure 4: US coal-fired capacity retired or repurposed to natural gas by conversion type (2011-19) 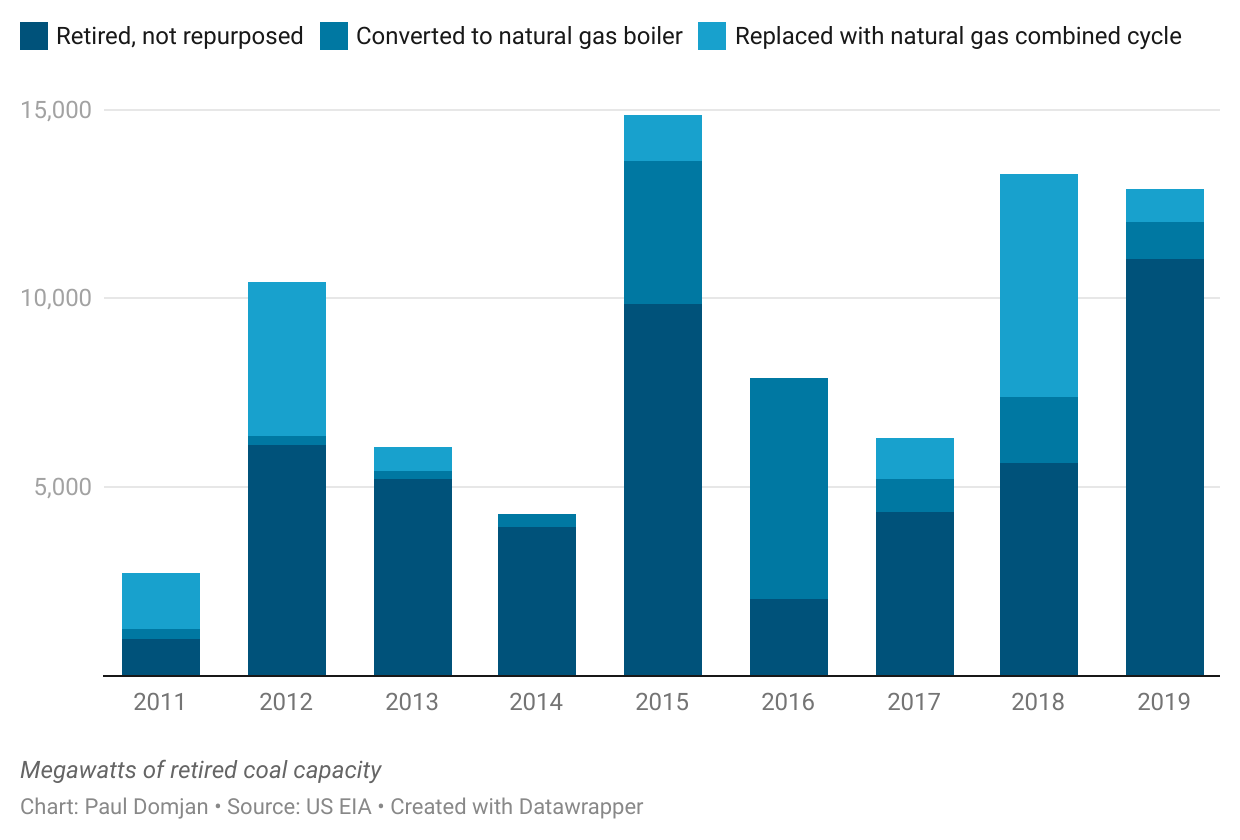 On the one hand, new understanding of the impact of methane leakage in the natural gas supply chain has raised questions about whether the total climate impact of natural gas really is better than that of coal, even though the impact on local air pollution is clearly positive.

On the other hand, outside of natural gas producers like the US, switching to natural gas may reduce pollution, but it won’t reduce the political costs of climate change. In coal-producing countries like India and China, and even in parts of the EU, coal will remain with us through the entire energy transition.

Figure 5: Unabated coal will be with us for many years to come in every scenario in the International Energy Agency's World Energy Outlook 2021 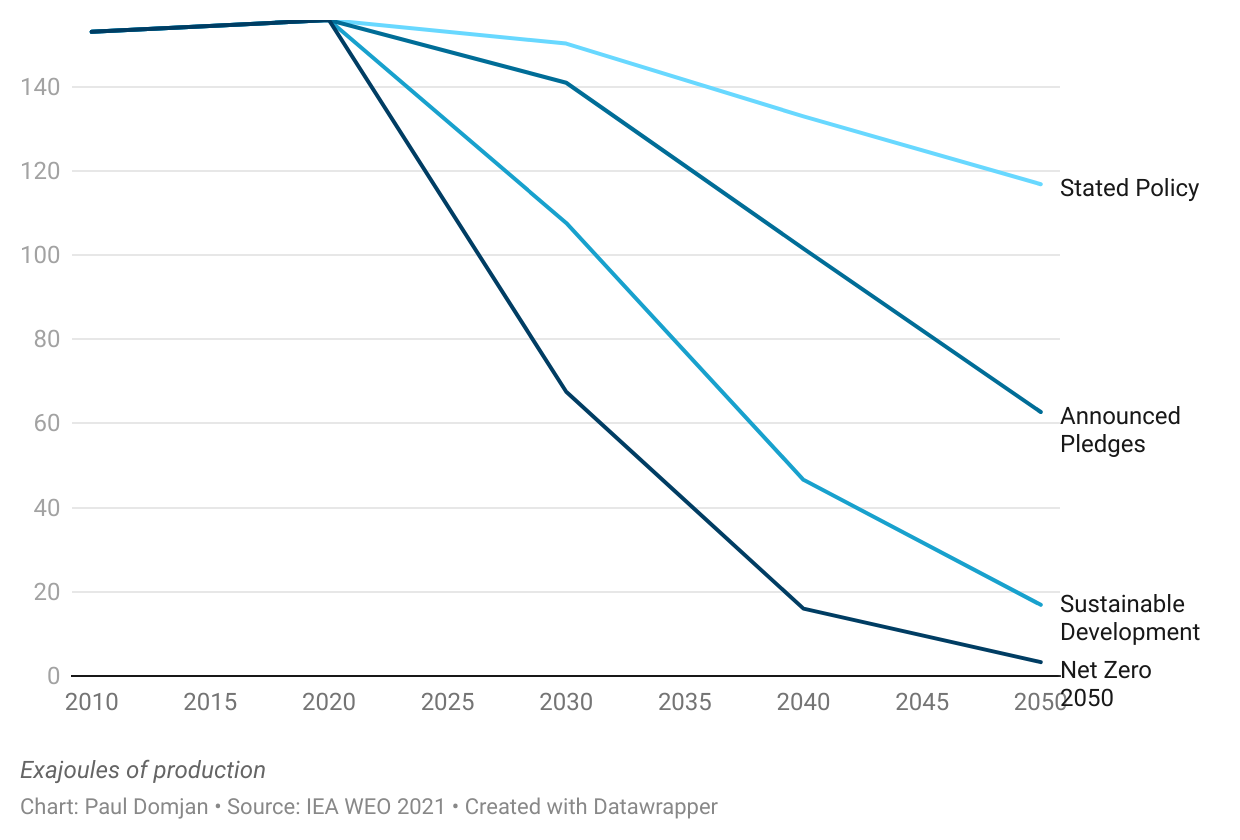 [1] The IEA’s Sustainable Development and Announced Pledges Scenarios also sees hydrogen overtaking biofuels, but later. The State Policies Scenario, which has the least action on climate, sees a very small role for hydrogen.