Consumer prices in Nigeria surge, bolstering bets that the CBN hikes this week

US Treasuries rallied on Friday as some mixed US data and Fed speakers eased market concerns that the Fed would hike rates by 100bp next week. The benchmark 10yr UST closed the week just below 2.920% and is trading flat this morning with the Japanese market shut for a holiday to drain liquidity out of the early morning session. Currently, Fed-dated swaps are pricing in around 79bp worth of rate hikes for the July FOMC meeting, suggesting little chance that we see a 100bp hike. The week ahead, meanwhile, sees very little in the way of major data releases while Fed speakers are entering their blackout period. Therefore, we could see volatility in the US fixed income market subside to some degree in the sessions ahead.

Meanwhile, volatility in European debt markets could pick up as the Italian political crisis drags on. Investors will need to wait until Wednesday to find out of the current coalition will remain or if new elections will need to be announced. The risk of Italy plunging into a new debt crisis is high, with this coming just as the ECB is expected to make an announcement on its new tools for combatting such a crisis.

Angola: Ratings agency Fitch on Friday revised Angola’s outlook to positive from stable while affirming its long-term foreign currency issuer default rating at “B-.” Fitch attributed the improved outlook to large fiscal surpluses, a sharp decline in government debt, and a current ac-count surplus driven by higher oil prices. Factors that could lead to a negative rating action include a sustained widening of the fiscal deficit leading to higher debt and/or the build-up of macroeconomic imbalances and a resurgence of liquidity pressures. Conversely, factors that could lead to a rating upgrade include continued improvement in public and external finances and a significant improvement in governance as reflected in the WGBI.

Botswana: Headline inflation in Botswana accelerated further in June, coming in at 12.7%y/y from 11.9% y/y in the month prior. This was the fastest pace of price growth in the economy since January 2009 and was driven by increases in major components such as transport, food and non-alcoholic beverages, housing, water, electricity, gas and other fuels. A weaker pula and elevated global energy prices also con-tributed to the headline figure. Given upside risks to the inflation outlook remain amid still elevated global commodity prices, supply and pro-duction constraints, and weakening local currency, the Bank of Botswana could hike its policy rate further in the near term.

Kenya: National Treasury, in its monthly bulletin, reported that Kenya’s public debt rose to KES8.56trn ($72.2bn) or 69.1% of GDP by the end of May from KES8.47trn in the month prior. Domestic debt was KES 4.27trn, or 34.4% of GDP, while external debt was KES4.295trn or 34.7% of GDP. Meanwhile, external debt denominated in dollars, euros, yen, yuan, and pounds was 67.9%, 18.6%, 5.7%, 5.3%, and 2.3%, respectively. National Treasury added that “a currency diversification is ongoing in order to mitigate against exchange rate risk on external debt.” Currency weakness has driven up debt and debt serving costs.

Kenya: The African Development Bank on Friday approved a EUR 63mn loan to boost Kenya’s food output. According to the lender, the funding is expected to increase the production of cereals and oil seeds by more than 1.5mn tons in the next two years, and the loan is part of the bank’s $1.5bn Africa Emergency Food Production Facility. The facility was set up to avert a food crisis exacerbated by the war in Ukraine. Farm exports are the biggest foreign-exchange earner after remittances, and the industry is Kenya’s biggest employer contributing 22.4% of total output last year.

Mozambique: Fitch on Friday placed Mozambique’s ‘CCC’ long-term foreign and local currency issuer default rating and debt instruments Under Criteria Observation (UCO) following the conversion of the agency’s exposure draft of its Sovereign Rating Criteria to final criteria. The UCO indicates that ratings may change as a direct result of the final criteria. It does not indicate a change in the underlying credit profile, nor does it affect existing outlooks. Fitch added that they will resolve the UCO status within six months and the outcome will depend on assessing the appropriate notching based on the new criteria. Not all issuers on UCO will have a rating change upon resolution.

Uganda: Local reports citing Minister of State for Planning Amos Lugoloobi indicate that Uganda’s debt has climbed to around 54% of GDP. According to the minister, the ratio above the threshold of 50% is due to increased borrowing to mitigate the effects of the coronavirus pan-demic on the economy. While the minister did not reveal the value of Uganda’s current debt, the data from the central bank of Uganda shows that as of October 2021, Uganda’s public debt had risen to UGX73.8trn from UGX69trn in June 2021. The rise was primarily attributable to UGX5.9trn borrowing on the domestic market.

The final trading session of the week saw the Kenyan shilling close on the back foot against the dollar, adding to its year-to-date losses of almost 5.0%. In a recurring theme this year, the shilling weakened on the back of increased dollar demand from oil companies. Dollar demand from the energy sector is still outmatching supply. Fuel accounts for a fifth of Kenya’s import trading bill, and this is one of the major contributing factors to the weaker shilling, which has broken through a series of record lows against the dollar this year.

The shilling is set to remain on the defensive in the week ahead amid persisting demand for dollars from importers. However, it is worth noting that increasing remittance inflows may ease the selling pressure at the margin. Data released by the Central Bank of Kenya on Friday showed that remittance into Kenya rose by 6.6% in June to $326.1mn from $305.9mn in June 2021. The cumulative inflows for the 12 months to June 2022 totalled $4,012mn compared to $3,383mn in the same period in 2021. The US remains the largest source of remittances into Kenya, accounting for 59% in June.

Overall the outlook for the shilling remains decidedly bearish in the near term. A growing external imbalance, limited inflows, elevated oil prices, rising fiscal risks, and election-related uncertainty are some of the factors that are set to continue weighing on a currency that remains notably overvalued on a real effective exchange rate basis. 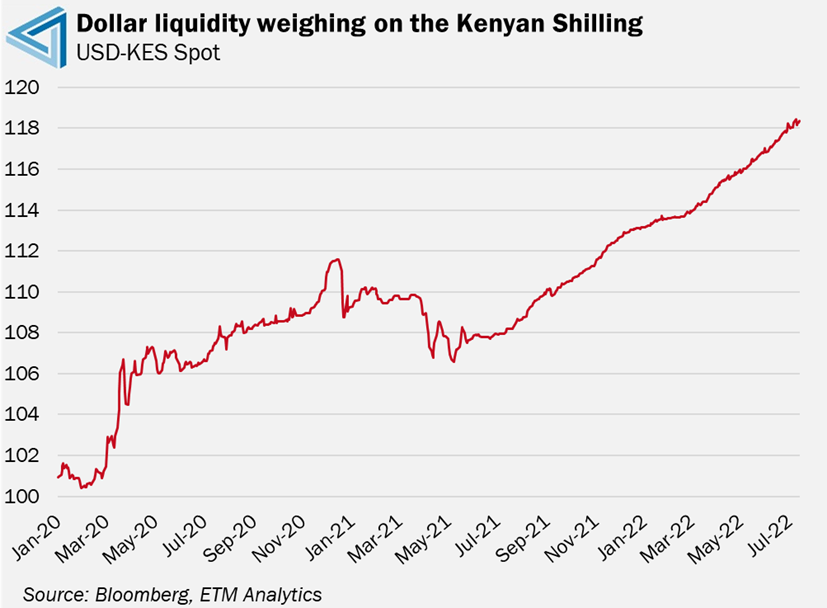 Soaring inflation and expectations for the Central Bank of Nigeria to hike rates further have resulted in a flattening in the Nigerian bond curve when looking at the 10v2 spread. As unpacked in the macroeconomic section, headline inflation surged to 18.6% y/y in June, driven by elevated food and fuel costs. Persistently high inflation has seen traders scale up bets that the CBN will hike rates further in the months ahead, resulting in a notable increase in shorter-dated Nigerian bond yields.

Nigerian T-bills have sky-rocketed this month, with the 3-month up more than 200bps. The 2yr bond yield meanwhile has risen by almost 100bps to 8.99%. Yields on the belly of the curve have also jumped this month, with the 6yr yield climbing 63bps. The bear flattening interest comes on the back of hawkish comments from the Federal Reserve this month after inflation in the US hit a multi-decade high. While there are some signs that global inflation pressures are easing, domestic inflation risks remain acute, and unless the CBN hikes rates in the coming months, the monetary policy differential between the US and Nigeria will widen, which would put pressure on the naira.

With the Fed expected to remain aggressive in its fight against inflation and expectations for the CBN to follow up on its 150bps in May with another bold rate hike, possibly as soon as this month, pressure on the front end of the Nigerian bond curve is likely to remain robust in the coming months. 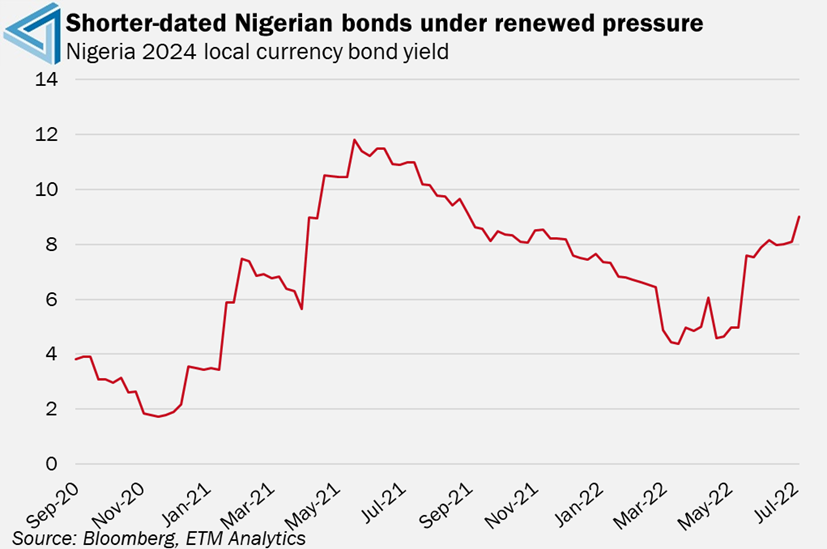 Headline inflation in Nigeria continued to quicken in June, adding to bets that the Central Bank of Nigeria will have to hike rates further in the coming months. Beating expectations, albeit slightly, inflation accelerated to a 5-year high of 18.6% y/y in June from 17.7% in May. On a monthly, consumer prices climbed by 1.8% in June. The main contributors to the increase in inflation were fuel and food costs. The world bank has listed Nigeria among the top ten countries in the world with the worst inflation rates. With persistent gasoline shortages, surging diesel prices, erratic power supply and continued currency weakness, inflation risks in Nigeria are skewed firmly to the upside. Concerningly, the recent inflation episode comes on the back of mounting growth risks, raising the risk that the country could slip into a situation of stagflation if inflation and inflation expectations are not brought under control.

Heading into this week’s Central Bank of Nigeria rate decision, the odds are stacked in favour of the central bank hiking rates. Recall that after leaving rates on hold for 18 months, the Central Bank of Nigeria hiked its benchmark interest rate by 150bps at its May meeting to 13.00%. While the rate hike was bold, given how acute Nigeria’s inflation problem is and the fact that real interest rates are so negative, there is an urgent need to hike. Failure to do so could lead to more headwinds for the NGN, further compounding inflation pressures. 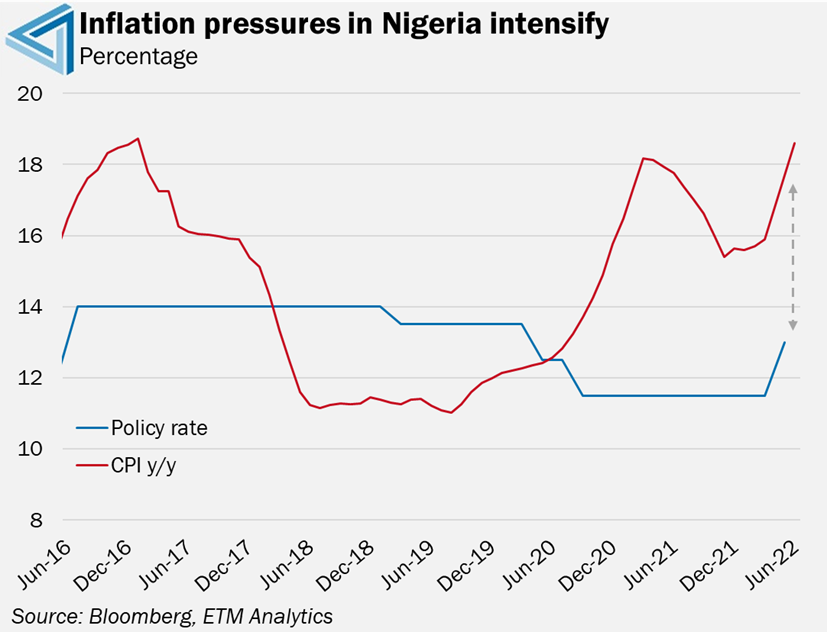