Comparing fiscal responses during the coronavirus pandemic and global recession

Countries are beginning to ease their lockdown restrictions – by our count, over 40% (c85) have announced some form of lockdown-easing measures in recent weeks, including the UK at the weekend; although a proper cross-country comparison is made difficult as measures vary by country (and it depends on how strict policies were in the first place). Investor attention will now begin to focus more on the prospects for an economic recovery, and its speed and trajectory – will it be V-, U- or even L-shaped?

This recovery will depend on numerous factors, of course, but some of the most important drivers are the various stimulus measures that governments and central banks around the world have taken. The global monetary policy response has been largely uniform, across both developed and emerging markets, with many central banks easing in various guises, but fiscal measures have been much more uneven.

These fiscal responses cover many areas, seeking to limit the extent of the downturn, targeting health spending, protecting the most vulnerable, businesses and workers, and providing the conditions for a rapid return of activity when countries emerge from hibernation (or suspended animation – Figure 1 shows the remarkable collapse in economic activity) when conditions allow. 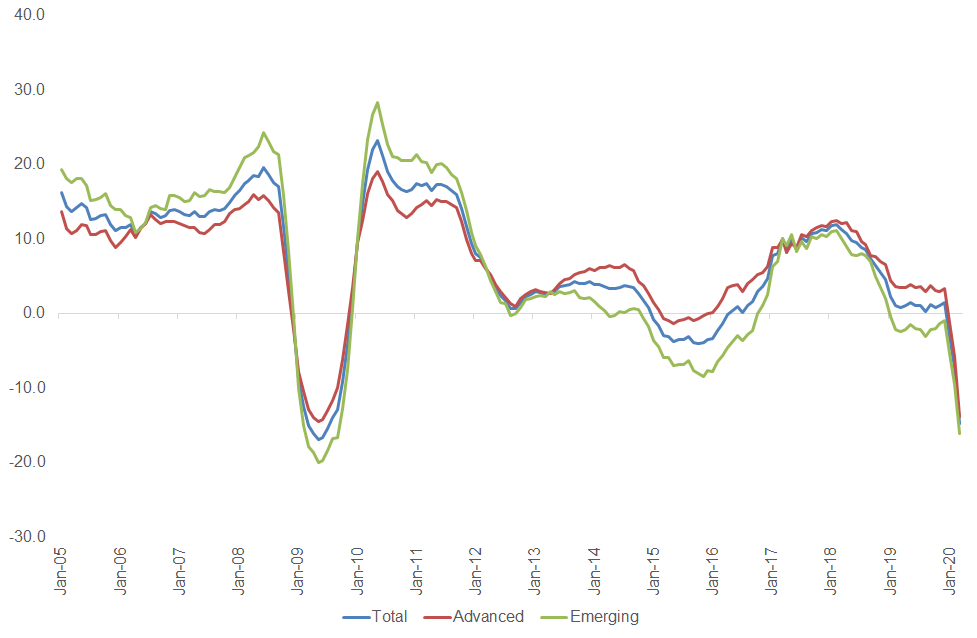 In this report, we show the variation in fiscal responses across the globe, based on information from the IMF's policy tracker, which reports the measures taken by 192 countries (or the individual country reports where necessary) – from this, we calculate each country's fiscal response based on announced measures, with the caveat that we do not yet know much about implementation or take-up of many of these measures and whether costs will turn out to be more or less than expected.

Market conditions have stabilised in recent weeks, in part based on these global policy measures, as evident among EMs from declining bond spreads (the EMBIGD spread is down by c20% from its peak on 23 March), an easing in capital outflows (or even the return of some inflows) and the opening of the new issue market (albeit mainly for high grade). But how this continues will depend in large part on the success of the measures these countries have taken to date.

Policymakers are balancing their desire to remain vigilant amid concerns of a second wave of infections with the enduring hardship of lockdown measures for many and the need to revive their economies after an unprecedented slump in economic activity in Q1-Q2. This economic impact has been through four main (and related) channels:

In fact, for many EMs and frontiers, the indirect consequences of Covid-19 in terms of the adverse impact on the global economy has been more severe for them than the direct consequences in terms of number of infections and (sadly) the death rate (although there might be a concern that infections may spread more rapidly in EMs and especially in low-income countries and overwhelm national health services that are ill-equipped for it).

A variety of responses

The IMF assumes a V-shaped global economic recovery, but the trajectory of the bounce-back will depend in part on the economic stimulus measures governments have pursued (as well as in public confidence to resume normal activity where possible).

As discussed, monetary policy measures have been fairly similar, but the magnitude of fiscal responses varies greatly. We show this variation in Figures 2 and 3, based on the IMF's policy tracker. The figures include both direct fiscal measures (spending measures and revenue measures, including for example tax exemptions or deferrals) and the provision of loans and guarantees; although we caution that cross-country comparisons may be made difficult by the different ways that countries could report these figures; for instance, the level of government treatment of loss of revenues, automatic stabilisers and so on.

From the data, we can quantify the fiscal responses for 134 countries (70% of the total). A further 52 countries (27%) have announced fiscal measures (revenue and spending), but they have not been quantified. That is, 186 countries (97% of the total) have done something – although some more than others. Indeed, many countries are on their second fiscal package (including Austria, Albania, Chile, Hungary, Iceland, Mongolia, Montenegro, Slovakia), some have announced three packages (Australia, Indonesia, Malaysia, South Korea, Slovenia) and some have done four or more (Japan, Singapore, Switzerland). On our count, only six countries appear to have taken no fiscal measures at all.

Figure 2: Comparison of fiscal responses for selected countries (% of GDP) 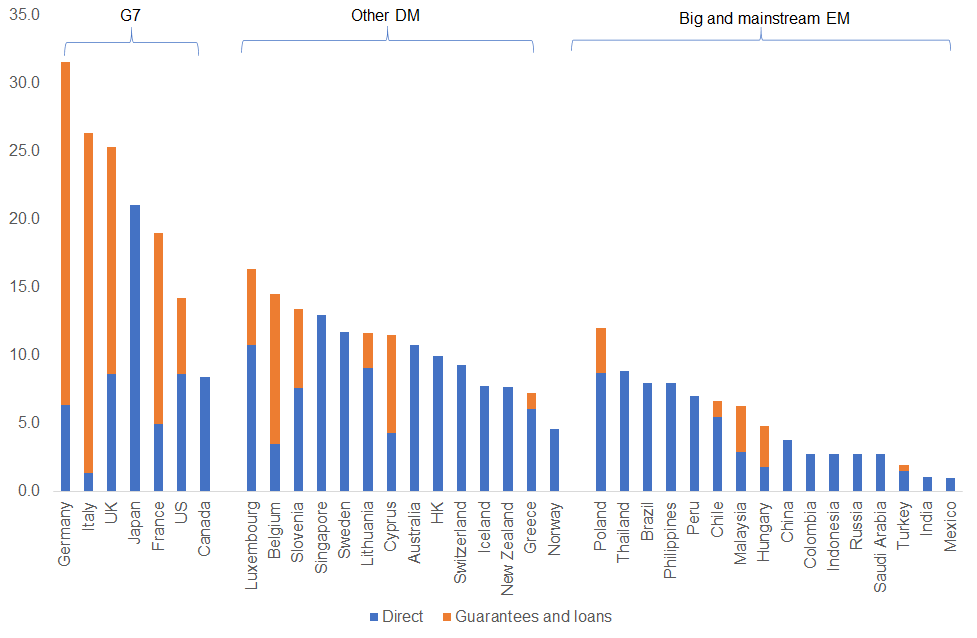 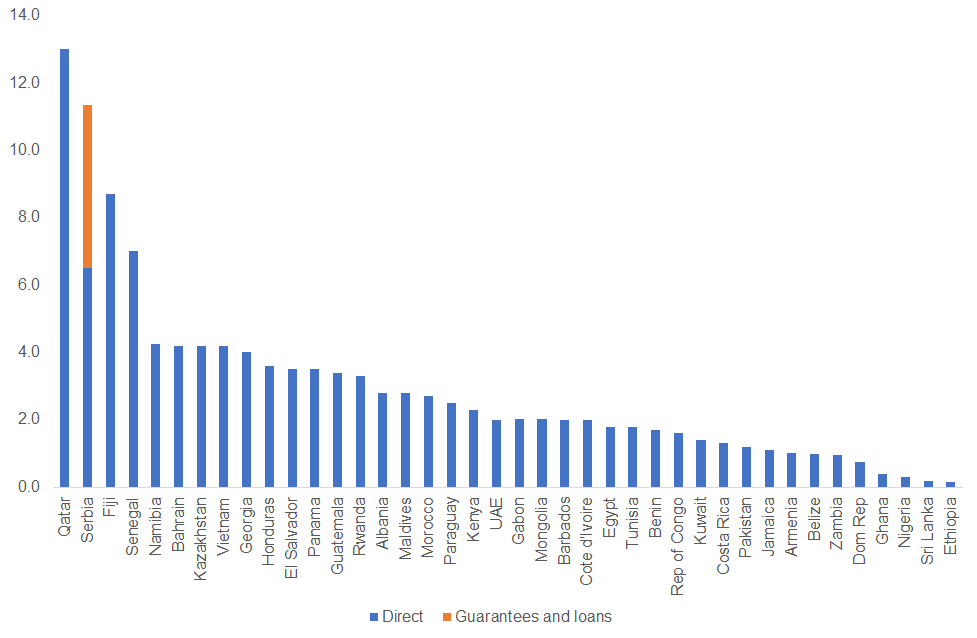 However, this says nothing about the efficacy and success of these measures. That notwithstanding, we make some observations:

1. The fiscal response for a country is only a guide to the overall fiscal impact. The static fiscal response typically captures spending and revenue measures, while the overall impact on the fiscal balance (headline budget deficit) in a dynamic sense will also depend on revenue losses related to weaker or lost economic activity, any offsetting fiscal measures to accommodate the fiscal response, use of automatic stabilisers, the fiscal operations at other layers of government and so on.

2. Although markets may worry about the large size of some of the fiscal stimulus measures taken by some countries, and how they will be paid for, that might be for another day. Still, prospects for higher taxes on income and wealth, especially for the better off, may weigh on longer-term growth prospects. That said, an outlook of lower global interest rates (as monetary policy supports the recovery too) may ease funding concerns.

3. Investors may worry more about those countries that are not seen as doing enough, as it might mean their health and humanitarian response is insufficient, push more people into hardship and imply their economies are less well prepared for the recovery if and when it comes. Lack of action may mean the economic impact is even more severe than it would be otherwise.

4. Although some have done less than others, the big developed market countries have done a lot and we may hope that those actions benefit other countries through multiplier effects (through trade, financial and confidence channels).

5. It may be surprising how relatively little some countries have done. Among big EMs, the fiscal response has been only 1% of GDP in India and Mexico and just 2% of GDP in Turkey. For China, the fiscal response at 3.8% of GDP also seems modest (although the monetary stimulus has been significant), after real GDP fell 6.8% yoy in Q1, as even though the lockdown measures only affected part of the country rather than the whole country, the economic impact has been more widespread. That said, China had already enacted significant tax cuts in 2019 (about 2.3% of GDP). Still, China's fiscal response so far seems small compared to the size of the stimulus it enacted during the GFC of c11% of GDP.  Perhaps China is keeping its powder dry (there is little point in providing much stimulus to exports now if no-one is able to buy them), so could we expect to see more stimulus when the recovery is more established, which will boost global growth and prospects for EM? Or does China feel that it is approaching a limit given its own debt mountain, which has accumulated since the GFC? Within some frontiers, the response has been limited to 1% or less in Zambia, the Dominican Republic, Ghana, Nigeria and Sri Lanka.

7. This pattern, with smaller fiscal responses in smaller EMs and frontiers, should not be that surprising; frontiers and smaller EMs are where fiscal flexibility and funding options are the most constrained, which limits their fiscal responses. That said, the argument might be that these countries over-borrowed in previous years (in the good times), leaving them with more limited space to pursue counter-cyclical policies in bad times. This makes them more dependent on official sector support (IMF and MDBs).

8. Conversely, some smaller EMs and frontier economies are targeting large fiscal responses. Senegal and Fiji are among the leaders (over 7% of GDP), with Bahrain, Kazakhstan, Vietnam and Georgia also pursing reasonably large measures (4% of GDP).