Protests broke out in Colombia on 28 April over President Iván Duque’s introduction of controversial tax legislation. Despite his withdrawal of the legislation on 2 May, the demonstrations have intensified, resulting in at least 27 deaths, 800 people injured, and 89 disappearances, according to Colombia’s Ombudsman’s Office. The first attempts at negotiations with leaders of the protests began today in Bogotá. However, violence in the city of Cali has not receded; there, in addition to looting, violent confrontations erupted on Sunday (9 May) between indigenous demonstrators and civilians opposing the blockades, with Valle del Cauca Governor Clara Luz Roldán ordering a five-day lockdown of access roads to the region to limit the incursion into Cali of new protests. Meanwhile, President Duque ordered the deployment of 10,000 police to the city. Given the decentralised nature of the protests, it is likely that there will be further violent demonstrations for at least a week until negotiations make progress. 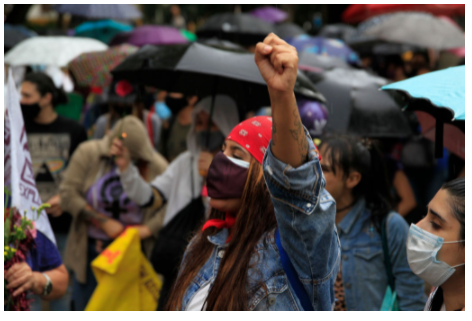 A woman shouts slogans against the government of President Iván Duque at Bolivar Park during a national strike on 6 May 2021 in Medellin, Colombia. Fredy Builes/Getty Images

The protests’ success in leading to the tax legislation withdrawal will encourage similar tactics for the challenging of government policy for the remainder of Duque’s term to 2022. The tax legislation, which increased levies on income tax for the lower middle class and value-added taxes (VAT) on staple goods including liquefied petroleum gas (LPG) used for cooking was the catalyst for a re-emergence of grievances already aired during the November 2019 violent protests that the government had failed to address (see Colombia: 30 April 2021: Colombia’s planned tax increases trigger widespread protests, increasing arson and vandalism risks if measures are maintained). This, fatigue with the coronavirus disease 2019 (COVID-19)-virus lockdown, growing unemployment, and exacerbation of poverty have been the main drivers of the protests. Colombia’s poverty rate rose by 6.8 points in 2020 to 42.5% over the previous year, expanding the number of those in poverty from 17.4 million to 21 million. Excessive use of force by the police has compounded the situation. This has motivated protesters to demand the prosecution of police officers using excessive force and the removal of military detachments from urban areas; more fundamentally, student unions are demanding the disbanding of the mobile anti-riot squad (Escuadrón Móvil Antidisturbios: ESMAD).

Duque’s reversal on the proposed tax bill is a highly unusual move from his government and sets a precedent for further demands from labour and student unions (see Colombia: Violent Protests). Protesters are now calling for the withdrawal of a healthcare privatisation bill currently under consideration in Congress; expansion of a national vaccination plan; subsidies for micro, small, and medium-sized enterprises (MSMEs); development of a national food sovereignty policy; and the implementation of a guaranteed basic income for all Colombian citizens. The government’s failure to incorporate all of these issues into the negotiations agenda would serve to trigger fresh demonstrations. If the government attempts to pass its healthcare privatisation bill, which is currently under consideration in Congress, new protests are likely to be triggered.

The breadth of demands and the decentralised nature of the protests is likely to delay the start of negotiations and protract their resolution. Negotiations to end the standoff in the November 2019 protests took place after three weeks, resulting in an agreed round of negotiations that began in January 2020, but were cut short in March because of the COVID-19-virus pandemic. However, this time the protests have been more widespread nationally and more decentralised in leadership terms. Initially driven by indigenous groups and labour unions, they have expanded as students, pensioners, taxi drivers, truck drivers, and even the medical sector have joined demonstrations. The National Strike Committee (Comité Nacional del Paro: CNP) umbrella organisation has formed loosely to organise national protest activities, but it is a nebulous structure of over 40 groups with sometimes diverging interests. An initial meeting between protest leaders under the CNP umbrella, government representatives, the Colombian Episcopal Conference (Catholic Church), and United Nations officials was set for 10 May. Greater involvement of the centre-left political Coalition of Hope, which has offered support since 7 May to develop a consensus agenda, would be likely to provide greater coordinating capacity within the protest movement and improve the possibility of a relatively quick agreement of terms for negotiations.

President Duque has suggested that if the CNP fractures or fails to agree on terms, he would consider declaring a state of emergency to gain the additional powers needed to break up demonstrations and establish crowd control measures, including curfews. IHS Markit assesses that although this move is likely to be ruled constitutional if it is challenged in the courts, it is unlikely to go ahead as it could exacerbate the violence further, leading to more roadblocks and arson incidents targeting government buildings and police outposts, including police neighbourhood posts known as Comandos de Atención Inmediata (CAIs) in urban centres. During three weeks of protests in 2019, when there was extensive property damage, the government did not resort to a state of emergency.

Anti-government sentiment is expanding beyond its traditional epicentre of Bogotá with Cali likely to remain the focal point of the current disputes. Where previous demonstrations were limited to Bogotá with smaller mobilisations in regional capitals, the latest protests have been largest in Cali, with demonstrations expanding to Bucaramanga, Cartagena, Cúcuta, Medellín, Manizales, Pereira, and Popayan. This is likely to increase collateral death and injury risks to bystanders and visitors, arson for businesses, and cargo delays due to roadblocks to hotspots throughout the country. However, the concentration of violence is likely to remain centred on Cali and the capital, Bogotá. 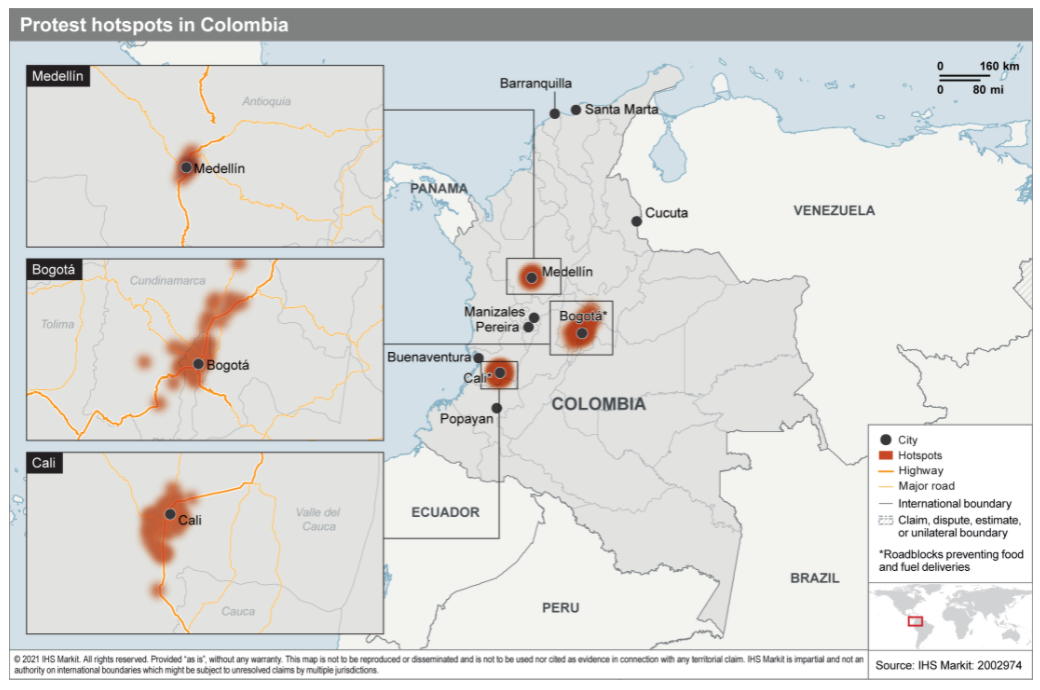 Protests in Cali are likely to be protracted as the diversity of interest groups makes a negotiated solution more difficult to resolve. Here, protests were sparked by indigenous groups bused in from rural areas before being joined by labour unions and tens of thousands of the city’s working class citizens. This dynamic means that the demands of indigenous groups for land rights and an end to community leader assassinations are likely to remain a focal point for demonstrations in Cali. Labour unions are also likely to continue demonstrations periodically until MSME subsidies and improved labour conditions for factory workers are included in the negotiation agenda. For the duration of the protests main access roads are likely to remain blocked, limiting food and fuel shipments. Access to Cali’s main international airport, which has already closed several times because of roadblocks limiting traffic access, is likely to remain sporadic. The five-day government-implemented closure of access to Valle del Cauca from 10 May plans for secondary-roads logistics routes protected by 10,000 police and 2,100 military personnel, likely reducing impacts for food and medicine deliveries. Frequent demonstrations in Loma de la Cruz and Puerto Rellena districts on the city’s west and east side, respectively, have attracted tens of thousands of demonstrators but are likely to remain largely peaceful. Continuing protests are likely to increase traffic and business disruption in the Cali neighbourhoods of Siloé, Aguablanca, and the city hall complex.