Colombia has turned to the political left for the first time in the modern era, after former guerrilla Gustavo Petro was elected the country's president in Sunday's second-round run-off. Petro defeated populist construction magnate Rodolfo Hernandez by 50.4% to 47.3%, according to official results from the election commission (a difference, ultimately, of 700,000 votes). This is Petro's third shot at the presidency. Hernandez has conceded defeat.

The result follows the first-round vote on 29 May, after neither candidate managed to get more than 50% of the vote, in which Petro unsurprisingly led while Hernandez surprisingly stormed into second place ahead of the centre-right continuity candidate Federico Gutiérrez.

The result may be a bit surprising after opinion polls ahead of yesterday's vote showed Petro and Hernandez were technically tied, although no polls were allowed in the week before the 19 June run-off. Petro led in some polls, while Hernandez led in others, although, in any case, the margins were not statistically significant. Still, Hernandez seemed to carry the momentum from the first round and was seen as more competitive against Petro in a run-off, while Petro seemed to reach a ceiling. The final result suggests Petro made gains in the last week.

The result may also be a disappointment for markets who seemingly preferred Hernandez, despite his policy uncertainty, over Petro (the "anyone but Petro" argument) and with such hope buoyed by those polls.

What will Petro do?

Petro promises social and economic change. He campaigned on reducing income inequality, increasing social spending, and tougher environmental policies, and, while some of his aims may be laudable in a country marred by years of conflict and insecurity, it will be the way that he goes about it that matters for investors (and, ultimately, his chances of success).

Petro wants to end oil exploration and cut the country's dependence on fossil fuels, and raise import tariffs, while his plans for land reform, tax reform, wealth redistribution and the redistribution of pension savings may cause alarm, not just among the rich but also among businesses and the middle class. He aims to raise US$10bn a year (2.8% of 2022 GDP) through, inter alia, levies on company dividends and offshore assets.

Will he be able to do it?

But Petro (of the Historic Pact party) lacks a legislative majority and will have to deal with a divided Congress, which could complicate decision-making and governance. Following the legislative elections in March, Petro's Historic Pact became the largest party in the lower house and second largest in the Senate, but fell short of a majority in both chambers.

Instead, the traditional centre-right parties (with the support of the left-leaning Liberal party), which did so badly in the presidential election running, still enjoy a majority in both houses and could seek to obstruct Petro's legislative agenda; although a split in the Liberal party could test this majority in the lower house as a number of its lawmakers defied its leadership and came out in support of Petro. If confirmed, and with the help of other minority parties and independents, Petro could muster enough support to form the largest coalition in the lower house, and even help it to secure a majority.

Still, Congress's divided nature may be some comfort to investors who will hope that it will seek to block or dilute more leftist or radical tendencies.

Moreover, the next President will take over at a difficult time as the deterioration in the external environment linked to Russia's war in Ukraine and higher global interest rates hit the economy, while a divided Congress may hamper reform efforts. Higher inflation, higher interest rates and slower growth may make for a short honeymoon period.

Added to this, Petro's macro policies threaten Colombia's economic institutions and macro-stability, although the constraints of office may force him to moderate his stance (at the risk of him losing popular support and alienating voters, which could lead to protests and unrest if he is seen as rowing back on election pledges).

Indeed, there are two more interest rate decisions due before Petro takes office on 7 August as the central bank continues its tightening cycle which has seen a cumulative increase of 425bps to date. The next board of directors meeting is on 30 June followed by one on 29 July. The previous meeting on 29 April voted 4:3 in favour of a 100bps increase in the policy rate to 6% (with three of the seven members voting for a 150bps increase). Inflation has risen to 9.1% yoy in May compared with 8.5% in March, at the time of the previous meeting. 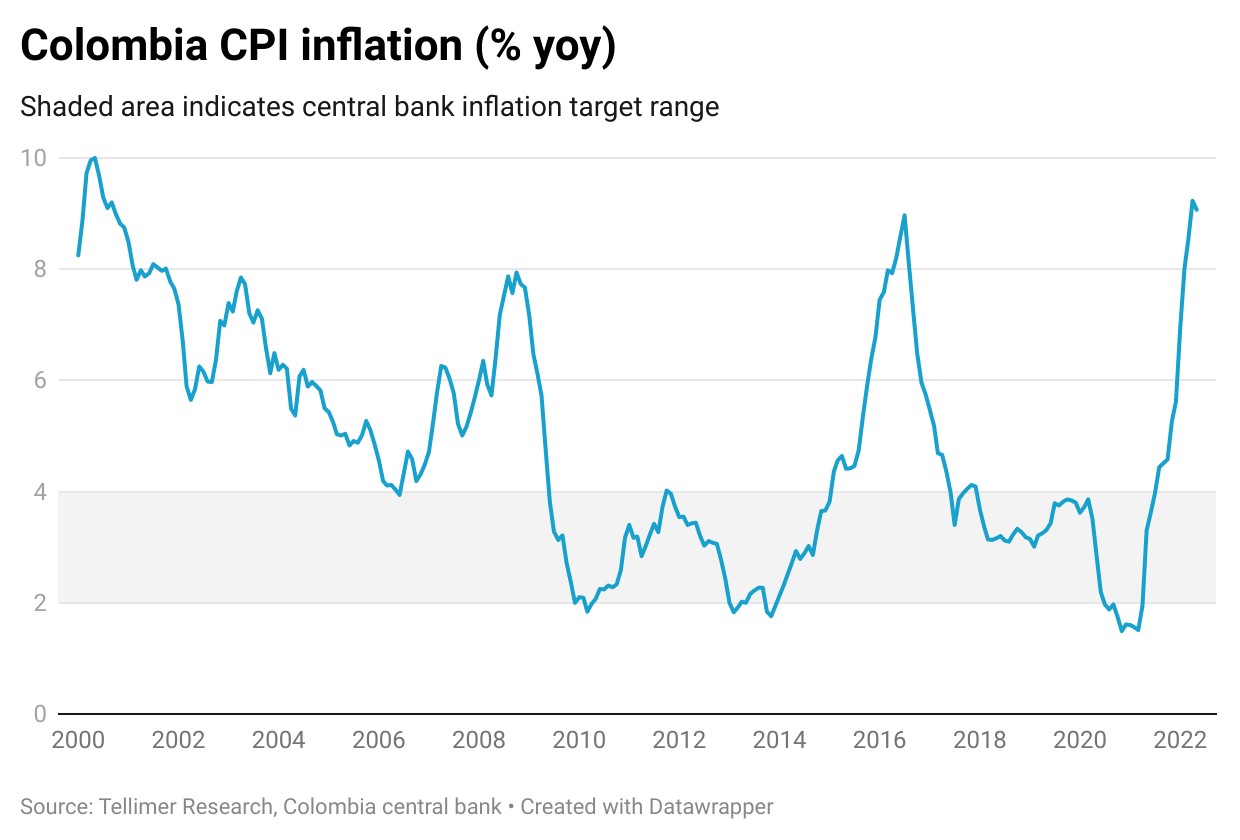 Investors will also be watching for an easing in Colombia’s twin deficits, which weighs on investor sentiment, after the sharp widening last year. High financing needs leave Colombia vulnerable to adverse shifts in investor sentiment.

The IMF projects a narrowing in the twin deficit this year, with a fiscal deficit of 6.1% and a current account deficit of 3.3%, helped in part by higher oil prices. However, balance of payments figures for Q1, published by the central bank, show the current account deficit widened by over 70% yoy in Q1, from US$3.1bn to US$5.4bn. This was despite a 48% yoy increase in goods’ exports. 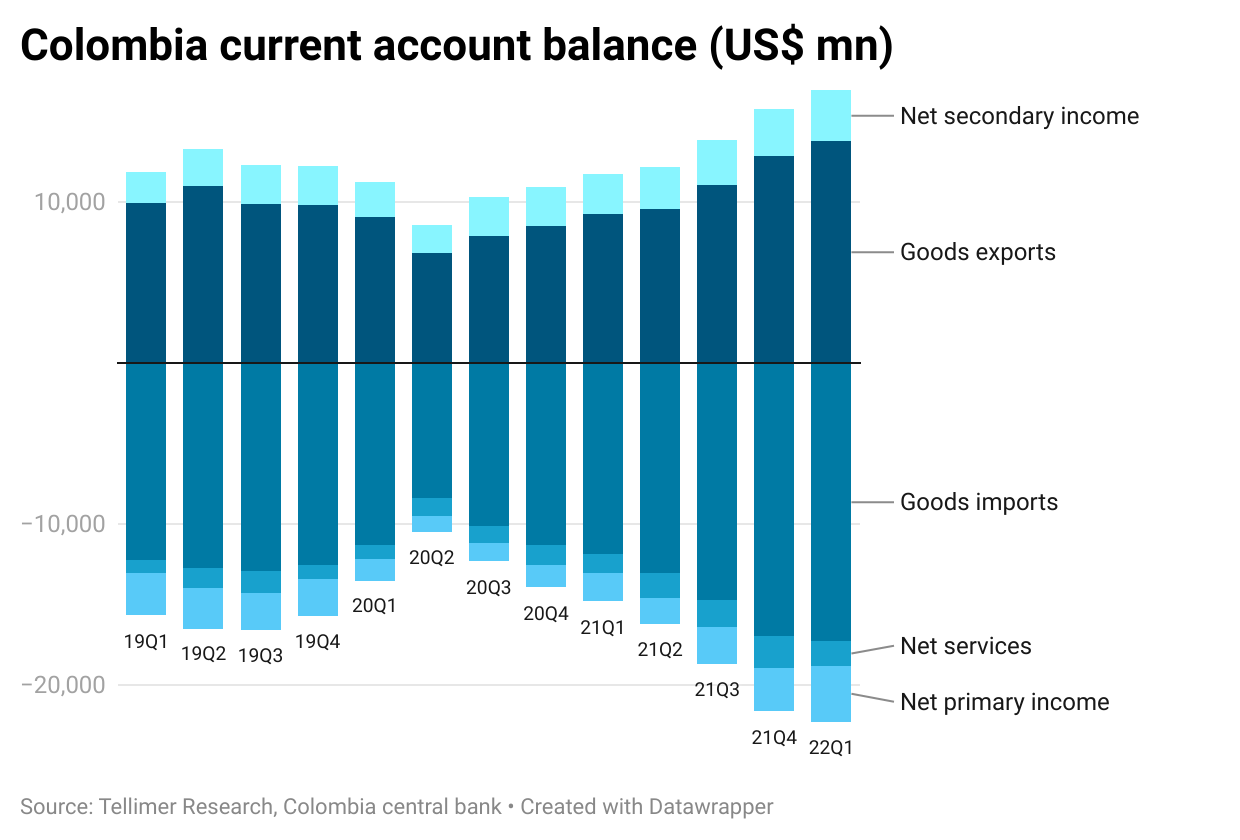 In addition, the composition of Colombia’s debt (public and external) leaves it vulnerable to exchange rate depreciation. As a result, while public debt is not excessive (65% of GDP in 2021 on IMF figures), maintaining sound fiscal discipline is necessary to keep public debt on a downward trajectory while any negative shock to the exchange rate (eg due to political interference at the central bank) could have destabilising effects.

On a positive note, the IMF approved a new two-year flexible credit line (FCL) for an amount of US$9.8bn on 29 April. The successor arrangement, its ninth FCL, replaced a previous one that was due to expire in April 2022, albeit for a larger amount and which was partially drawn. Crucially, in light of upcoming elections, the IMF’s approval of the new FCL noted political assurances on policy continuity from the leading candidates.

Colombia (Baa2/BB+/BB+) has seen its dollar bonds weaken sharply this year, as with most in EM, due to the deterioration in external conditions from the twin shocks of war and rates, as well as election uncertainty. The total return of -14.3% YTD for the Colombia constituent of the Bloomberg EM Sovereign USD index compares with -19.4% for the overall index, although Colombia has fallen fractionally by more than the index in the most recent leg of the sell-off (-5.2% versus -4.6% since 6 June).

We assign a Sell to Colombia's dollar bonds. To the extent that investors were pricing in a Hernandez victory, we expect Colombian bonds could weaken initially and pending better visibility over Petro's plans in office and relations with Congress, although investors may wait to see who Petro appoints to his economic team and whether he moderates his message (could Petro prove more like Ecuador's Lenin Moreno than the leftist heterodoxy investors fear?). There are also two months before he can do anything. Meanwhile, external headwinds will likely continue.

However, if Petro does moderate, valuations may begin to look attractive for Colombian bonds as ability and willingness to pay are both strong, supported by a strong macroeconomic policy framework. 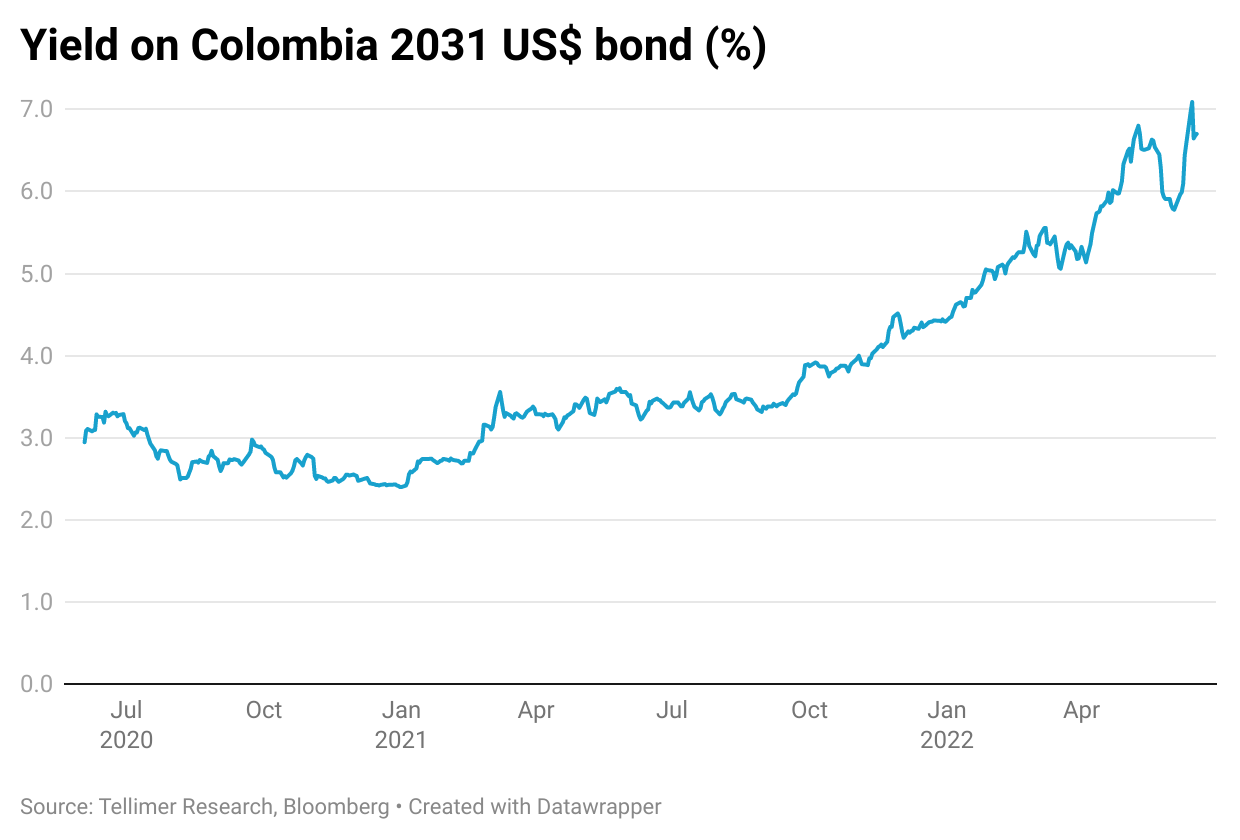 Colombia equities (IEQC index) are up 8%, in total US$ return terms ytd, second behind the best-performing regional peer, Chile (up 15%) and in the middle of the range seen in the GCC (from Saudi up 1% to Abu Dhabi up 13%).

Trailing PB of 1.0x (for 11% ROE) is a 15% discount to the 5-year median. This is a similar discount to that seen in Mexico but less than in other LatAm peers (eg 23% in Brazil). Colombia’s FX rate is relatively cheap; should REER return to its 10-year median, then there is 15% upside in the peso (in LatAm, only Brazil is cheaper on this measure). Compared with oil exporter peers in global EM, Colombia appears much cheaper.

Of course, there are concerns about a tilt left in economic policy, notwithstanding the fragmented Congress through which Petro may struggle to pass radical legislation. But Colombia's valuation arguably already compensates for this, particularly in comparison with the oil exporter peer group. 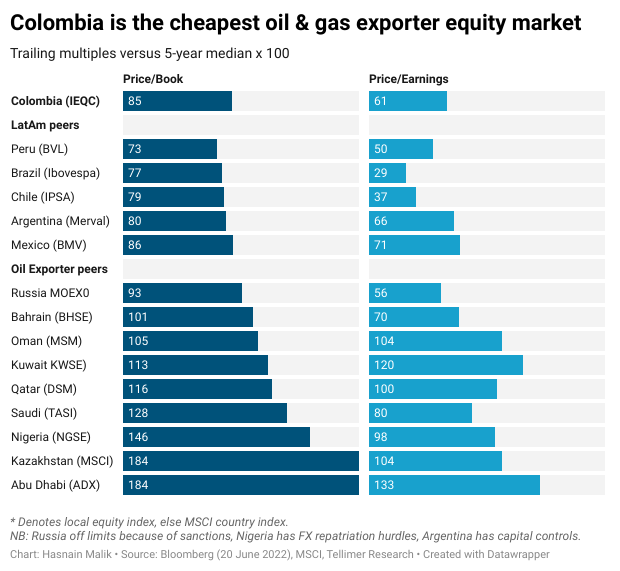