Colombia: The challenges ahead for the new president

The election result may itself have been a disappointment for markets but, actually, Colombia's dollar bonds are up modestly since then, helped in part by a smooth transition and Petro's (surprising) moves so far to reassure investors (especially with his finance minister pick) and by an easing in global financial market conditions in recent days. However, that the central bank has also raised interest rates by a total of 300bps since the run-off vote, as it battles inflation at a 20-year high, as well as ongoing investor concerns over Colombia's large twin deficits, also indicates the scale of the challenge ahead and the difficult economic situation that Petro inherits.

We maintain our Sell on Colombia's dollar bonds but see value in the equities.

Petro comes to office on promises for social and economic change, with plans that may scare international investors; including, among other things, reducing income inequality, increasing social spending, wealth redistribution, raising import tariffs and cutting the country's dependence on fossil fuels.

And with signs that he'll enjoy more support in a traditionally fragmented Congress, following a clear shift in political allegiances since the election, he might just be able to carry out his plans. Following the legislative elections in March, Petro's Historic Pact became the largest party in the lower house and second largest in the Senate, but fell short of a majority in both chambers. However, according to media reports, under parliamentary rules, the Liberal party (with 15 seats in the lower chamber and 32 in the upper house), which had supported the outgoing government under President Duque, has announced its support for the new government, which together with several other parties, should give Petro's Historic Pact coalition a legislative majority. It may also be able to call on some of the independents for support, while only four parties have declared to be in opposition to the new government.

The implications of this, though, are unclear – whether it proves to be good or bad for governance, and investors, remains to be seen. On the one hand, a majority will help Petro push through reforms, although fluid and wavering support could add to the uncertainty; on the other hand, a strong opposition (or divided Congress) could have helped check radical and populist excess. As it is, such a broad-based – and loose – governing alliance could prove fragile or unworkable, preventing Petro from getting anything done, and/or risk diluting reforms, weakening their quality and effectiveness, especially if Petro has to pander to different factions to retain his support. Ruling by the lowest common denominator may not be ideal.

Still, signs of a moderation in Petro's policies during the transition and – crucially – the masterstroke of naming the highly respected economist Jose Antonio Ocampo as his finance minister pick may have helped to reassure investors over a shift to the left (albeit at the risk of Petro losing popular support and alienating voters if he is seen as straying too far from his campaign promises).

Ocampo, a Columbia university professor and Yale PhD, has bags of international and policy making experience, is no doubt politically astute and has previously worked in Colombia's Ministry of Finance and served on the central bank board. That said, capable finance ministers elsewhere have often fallen victims to politics.

The new economic team has also said it wants to attract foreign investment by guaranteeing a stable business environment, which may provide some comfort to investors, as might their comments about a gradual energy transition.

The central bank has also asserted its independence, hiking interest rates twice since the run-off vote, with a further 150bps increase in July – as expected – following its 150bps increase in June. It takes the policy rate to 9%, its highest level since 2009, and brings the cumulative increase this year to 600bps – and to 725bps in this cycle – as the central bank fights inflation at a 20-year high. 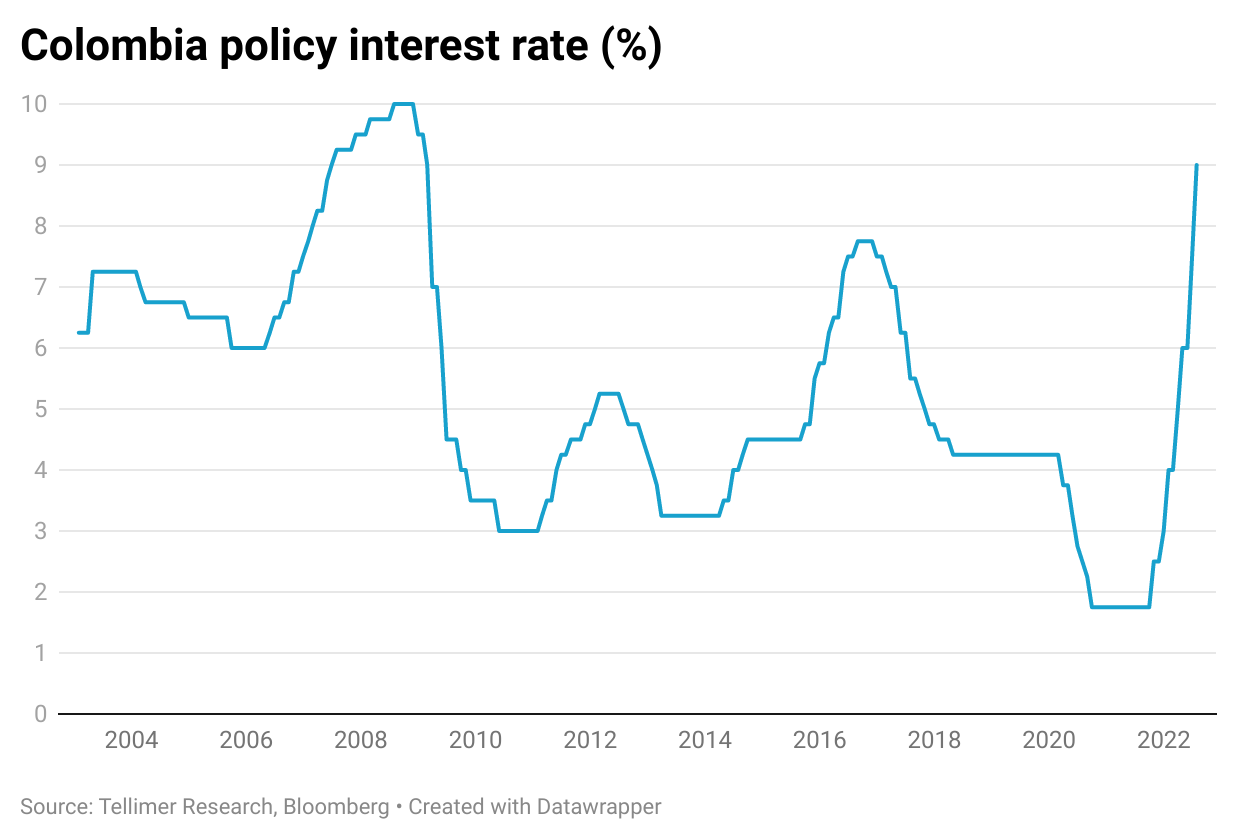 CPI inflation rose to 9.7% yoy in June (July inflation is due on 5 August with the Bloomberg consensus calling for a further increase in the annual rate to 10.1%). The central bank noted that core inflation and inflation expectations also continued to rise. It said that six board members voted in favour of the decision and one voted for a 100bps increase. 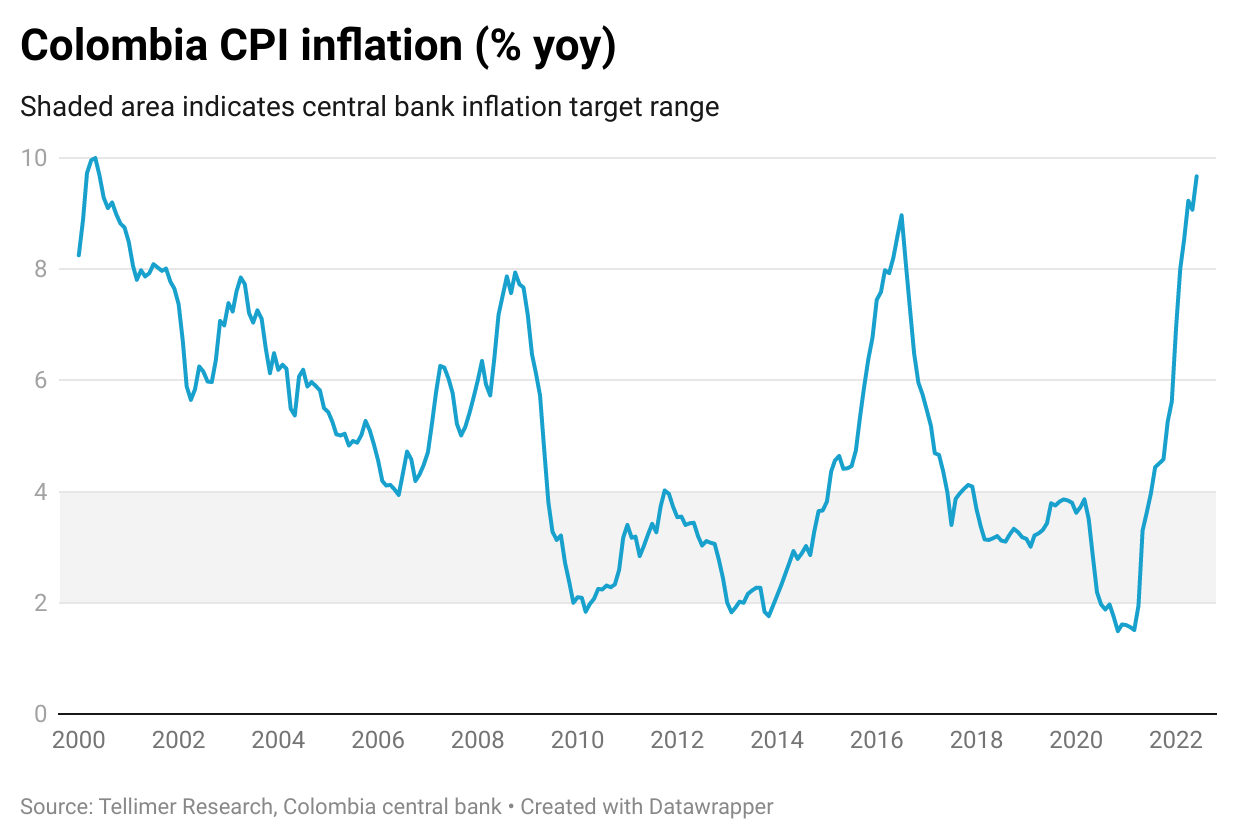 However, the central bank may be nearing the end of its tightening cycle according to some observers, a view perhaps reinforced by the minutes of the July board meeting published on 2 August that said it may now be possible to moderate the pace of additional interest rate rises in future.

Real interest rates are much less negative (based on actual inflation) and are positive, and well above the neutral rate, on the basis of one-year ahead inflation expectations. But we are not so optimistic, especially with the central bank also revising upwards its growth forecast for this year from 6.3% to 6.9%.

In addition, Petro had previously expressed his opposition to raising interest rates to fight inflation, arguing it will hurt employment, suggesting instead that it required more active agricultural support. Investors will hope Ocampo, and the central bank, will be able to stave off any threat to its independence.

Investors will also be monitoring Colombia’s twin deficits after the sharp widening last year, with a fiscal deficit of 8.2% of GDP and a current account deficit of 5.7% of GDP, according to the IMF. High financing needs leave Colombia vulnerable to adverse shifts in investor sentiment. However, while the IMF projects a narrowing in the twin deficit this year, with a fiscal deficit of 6.1% and a current account deficit of 3.3%, helped in part by higher oil prices, balance of payments figures showed the external deficit widened by over 70% yoy in Q1. In addition, the composition of Colombia’s debt (public and external) leaves it vulnerable to exchange rate depreciation. The Colombian peso (COP) fell by 5.4% versus the US dollar in the year through to end-July, the third worst performing currency in Latin America this year.

To that end, the first test of Petro's plans and governing cohesion will be whether he can get his new tax bill through Congress. The new government is expected to submit a draft tax bill upon taking office that aims to boost revenue by 5ppts of GDP to fund welfare spending and cut the fiscal deficit. This does not seem credible to us (unless it is based on higher oil revenues, which Petro wants to diversify away from). However, we don't have the details.

We maintain the Sell on Colombia's dollar bonds that we assigned after the run-off vote, with a yield of 6.5% (z-spread 392bps) on the COLOM '32s as of cob 2 August (on a mid-price basis on Bloomberg), and a price of US$77.0, despite its recent strong performance. Yields had risen to over 7% in recent months, in part reflecting the wider EM sell-off, but have since recovered (note, the chart below shows the yield of the '31s given its longer price history). 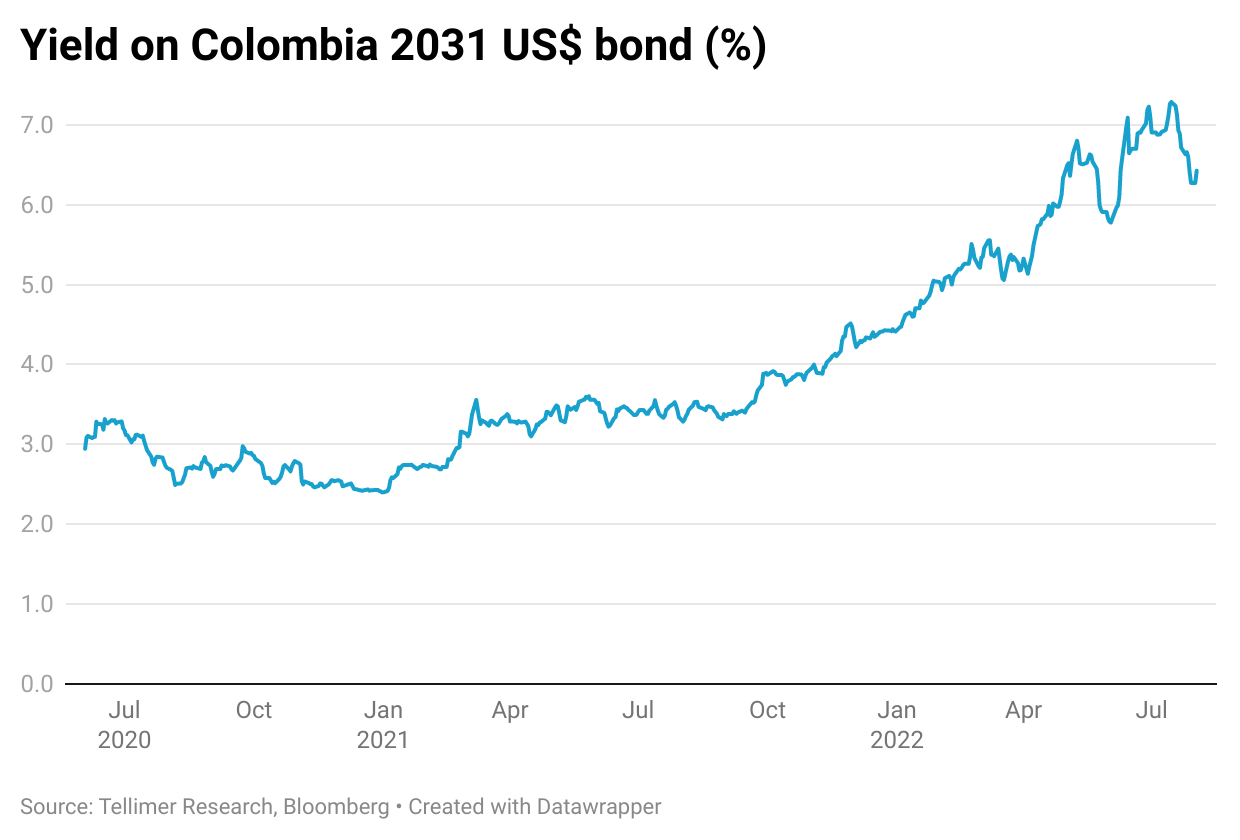 Colombia was one of the best-performing markets in the Bloomberg EM Sovereign USD index in July (total return 6.6% versus 3.1% on the index), as the threat of global recession replaced inflation fears, with the yield on the '32s falling by 88bps to 6.3% (and by over 100bps since mid-July), and the spread down by 52bps to 383bps, on the month. The bonds rose by c5.5pts to US$78.1. However, more hawkish Fed comments saw the bonds fall by 1pt on 2 August, with the yield rising 18bps to 6.5%.

The spread of Colombia over Peru in the Bloomberg EM Sovereign USD index has eased to c200bps from its wide of near 240bps in July. That this is still well-wide of its pre-Covid average of c50bps over 2018-19 may indicate some value, although we think some of this spread widening is warranted due to deteriorating fundamentals (and not least the average two-notch rating difference), although Peru is not without its problems, too. 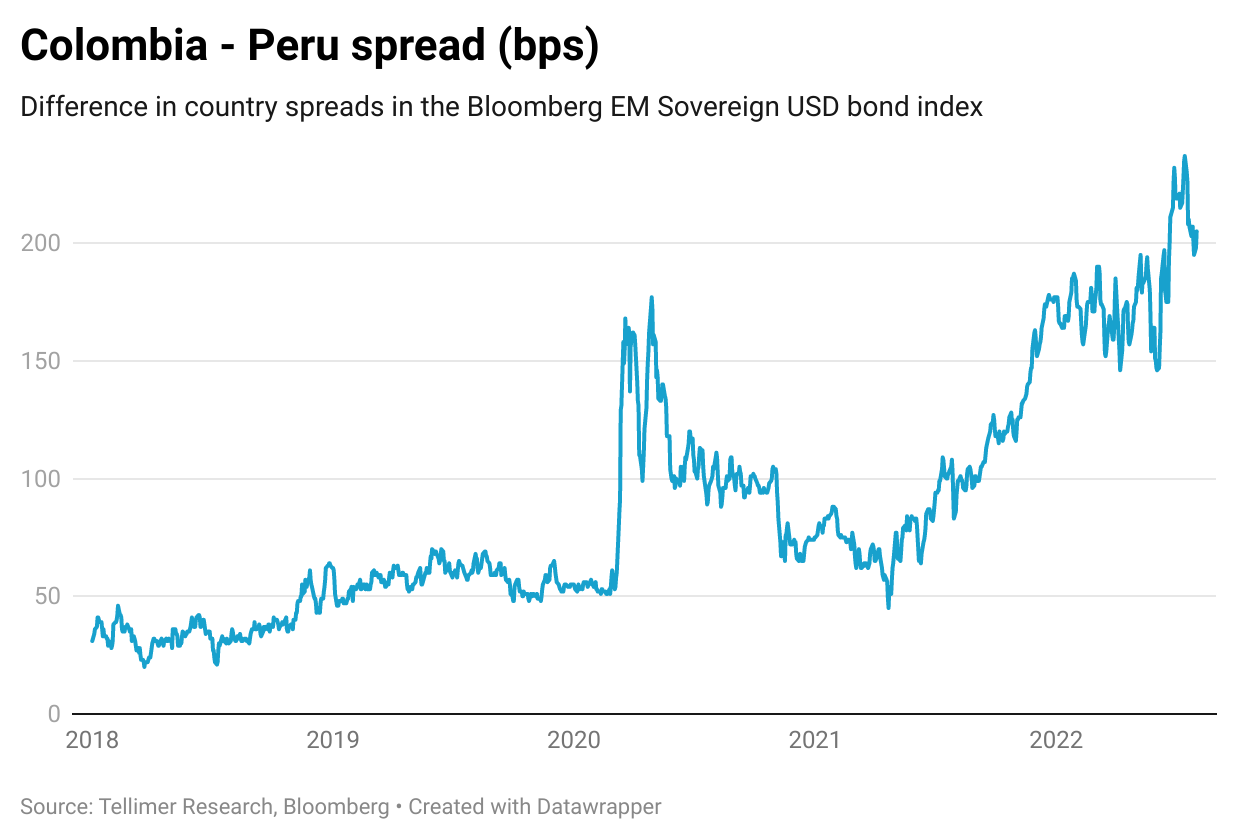 However, as we noted at the time of the run-off vote, if Petro does moderate, valuations should begin to look attractive for Colombian bonds as the ability and willingness to pay are both strong, supported by a strong macroeconomic policy framework. That said, lower rates and an easing in EM financing conditions stemming from global recession fears may prove a double-edged sword for Colombia if it means lower oil prices, with oil being the main driver of the expected narrowing in the twin deficits.

Colombia equities (IEQC index) are down 13%, in total US$ return terms ytd, a long way behind the best-performing regional peer, Chile (up 15%) and behind the range seen in the GCC (from the UAE up 4% to Oman up 18%).

Trailing PB of 0.9x (for 12% ROE) is at a 23% discount to the five-year median. This is a similar discount to that seen in Brazil but less than in other LatAm peers (eg 30% in Peru) and this compares with 20-40% premia in the GCC. Colombia’s FX rate is relatively cheap; should REER return to its 10-year median, then there is 27% upside in the peso (in LatAm, this is the highest upside on this measure, even more than the 20% implied in Brazil). Compared with oil exporter peers in global EM, Colombia appears much cheaper.

Of course, there are concerns about a tilt left in economic policy, notwithstanding the fragmented Congress through which Petro may struggle to pass radical legislation. But Colombia's valuation arguably already compensates for this, particularly in comparison with the oil exporter peer group.