Colombia went to the polls yesterday, voting in primaries to choose some of the candidates ahead of its presidential election on 29 May, and in legislative elections for the Senate and House of Representatives, amid investor concerns that the country will see a shift to the left.

Despite a rapid post-Covid economic recovery, the elections take place against a backdrop of an unpopular incumbent president, last year's protests and the government's crackdown on them, and a resurgence in violence (despite the 2016 peace deal).

There were few surprises in the primary vote, based on the partial count so far reported in the media, as the expected favourites lead the ballot to secure the nominations for their respective parties:

The number of votes each coalition received is also instructive, with 1.8mn voting for Petro's Historic Pact, 1.2mn for Team for Colombia and 0.9mn for the Center Hope Coalition, according to Bloomberg.

The results suggest Petro, as expected, remains the leading candidate going into the presidential election, and that it will merely be a matter of who faces him in the second round if, as seems likely, he cannot win outright in the first round (candidates need more than 50% in the first round to avoid a run-off).

Six candidates, whittled down from a field of 15, will stand in the first round of the presidential election on 29 May, with a run-off on 19 June if no one wins an outright majority. Yesterday's primaries will determine the final three candidates, with three already having been chosen.

Current president, Ivan Duque, elected in 2018, cannot run again due to the non-renewable four-year-term limit. Duque defeated Petro in that election after a second-round run-off (54% to 42%).

Petro's Historic Pact was also performing well in the legislative elections, where traditional and conservative parties have typically dominated and where, currently, while no single party has a majority in either chamber, the right/centre-right dominates. According to the early vote count, the party was ahead in the lower house and second in the Senate, although likely falling short of a majority in either chamber. The new Congress will have 108 senators and 188 lower house representatives.

The result of the legislative elections will therefore determine whether Petro, if elected president, will be able to form a working leftist coalition, or if it will be fragmented. While a divided Congress may stifle reform prospects, it may also help alleviate investor fears over populist policies, although neither outcome seems optimal. Petro is reported to want to end oil exploration and raise import tariffs, while his monetary policy plans could also threaten central bank independence.

The IMF projects real GDP growth of 4.5% this year, supported by a strong policy framework, with improvements in public finances (the deficit is projected to narrow to 6.2% this year), although – as elsewhere – inflation has picked up. CPI inflation was 8% yoy in February. The central bank has responded to mounting inflation, increasing its policy rate by a total of 225bps in four hikes since September, and with the last increase (100bps) coming in January.

Public debt has also jumped to 67% of GDP (based on IMF WEO projections for 2021), which will require the continuation of sound fiscal policy going forward in order to return debt to a sustainable path.

We do not have a recommendation on Colombian bonds currently.

While a possible shift to the left under Petro could weigh on investor sentiment, the dollar bonds have so far performed reasonably well this year (falling by less than the market) while the currency has strengthened. This is despite concerns over Fed tightening and the impact of Russia's war with Ukraine, although this may be because of higher oil prices. Colombia is a (small) oil exporter (producing c750,000 bpd). It also enjoys strong support from the US, regarded as an important strategic ally in the region, although it is unclear if, and in what shape, this will continue under a leftist government.

The yield on the COLOM '32s is 5.4% (z-spread 360bps), as of cob 11 March (mid-price basis on Bloomberg), with the yield up some 100bps this year, although the spread is only 48bps wider. Prices in the 70-80s for medium to longer-term low coupon bonds may begin to look attractive for defensive investors.

In addition, Colombia has a large flexible credit line (FCL) with the IMF, which provides precautionary access to additional financing and has reinforced its liquidity buffers in times of stress. It has already drawn c30% of the US$17bn facility. The FCL, however, expires at the end of next month, before the presidential election, and investors will be interested in what plans the new government, particularly a leftist government, will have, if any, for a successor arrangement. 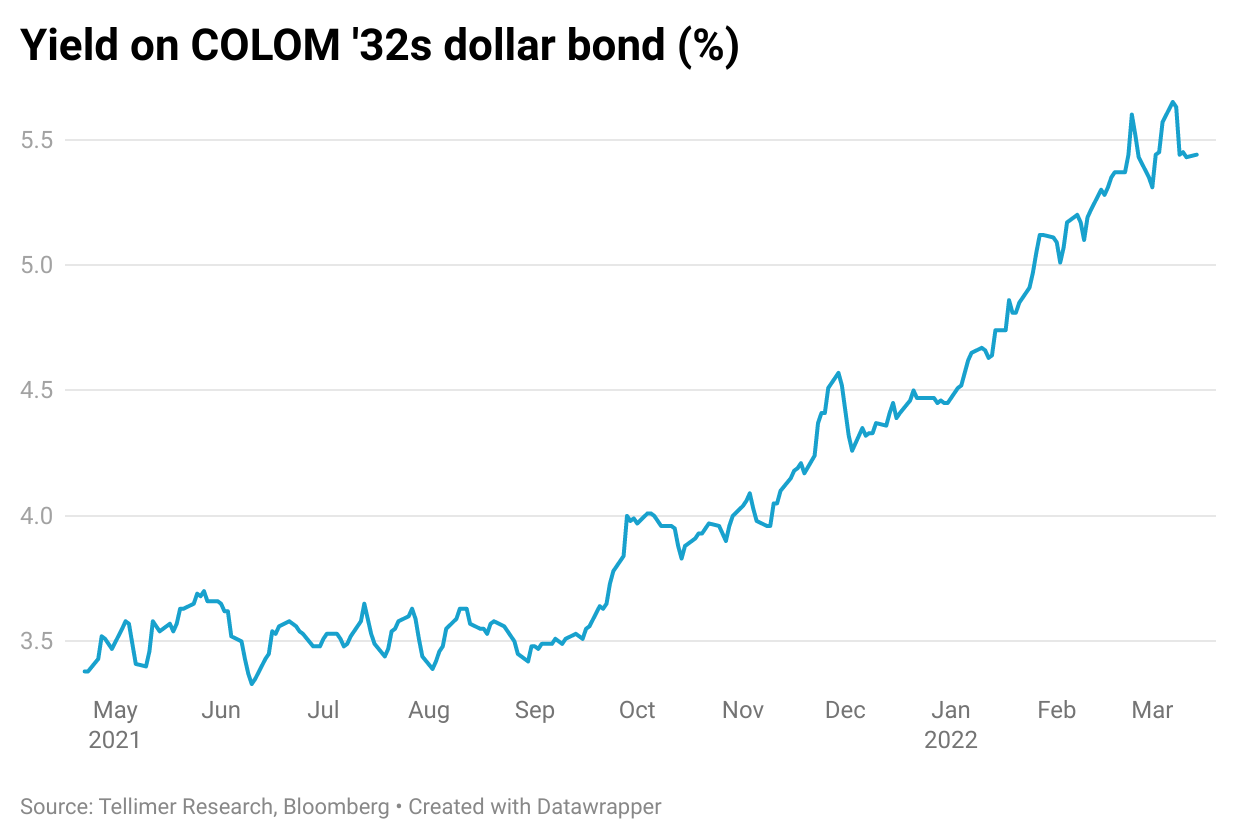 Meanwhile, the Colombian peso (COP) is one of the best performing EM currencies this year (+6.8% YTD versus the US dollar, the fourth strongest in Bloomberg's EM currency ranker behind Angola, Brazil and Peru). This has probably been due to higher oil prices.

However, it is not clear if this performance will continue in the event of a swing to the left, should Petro win and especially if he gains control of Congress, although – like Peru – we'd be more concerned about the currency than the bonds, in the near term, pending greater visibility over the new government's economic plans, policy framework and funding needs. 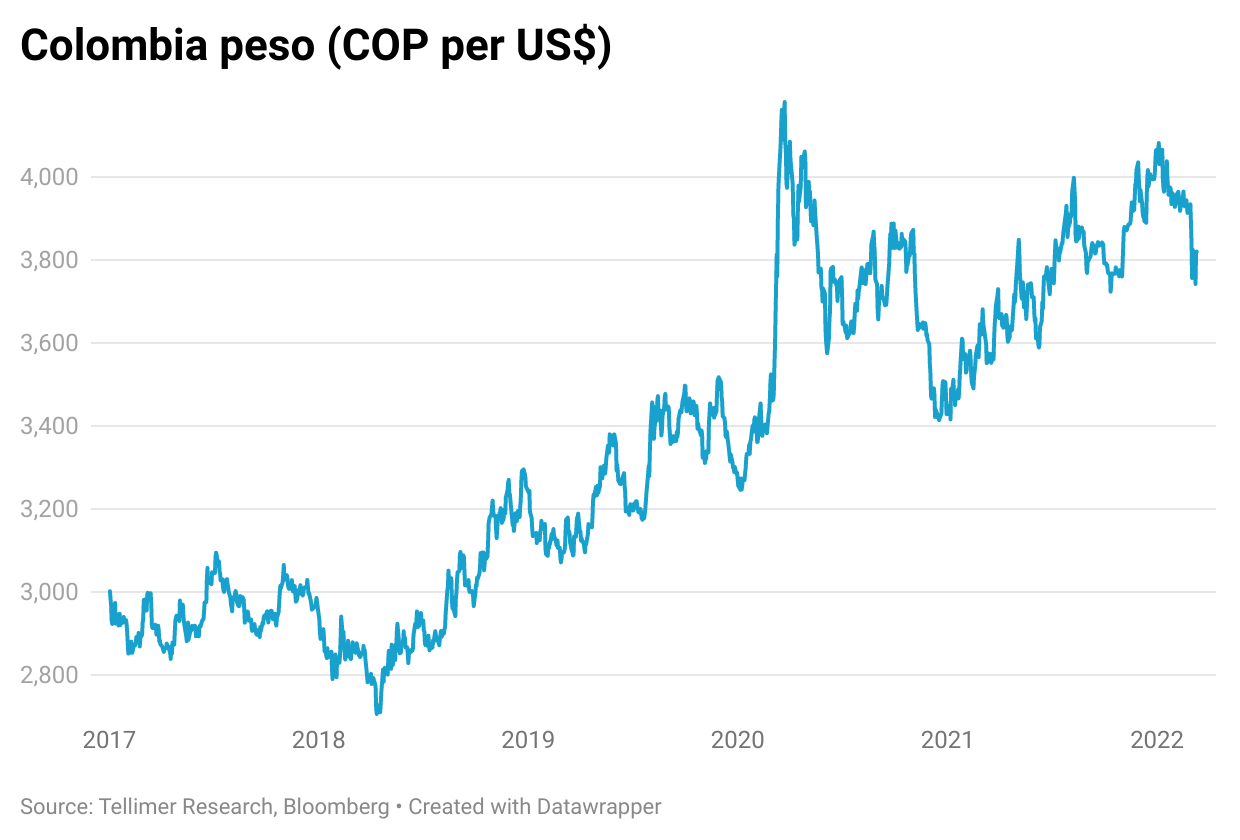 For foreign investors, Colombia is the cheapest oil exporter equity market in emerging markets. Sustained high oil prices implies upside risk to the IMF’s forecast of 4% current account deficits in 2022 and 2023 and de-risk the FX rate (a return to the 10-year median REER would imply almost 20% upside to the spot FX rate). For local investors, the consensus forward equity dividend yield of 12.8% looks attractive alongside a 9.3% five-year local currency government bond yield.

However, a negative 4% real interest rate and an average fiscal deficit over 5% over 2022 and 2023, according to IMF forecasts, suggests that policy tightening is needed, which is likely to dampen growth. And, with A polarised left versus right election campaign looming, investors may choose to see that resolved before choosing Colombia as their commodity play. Our preferred commodity plays in LatAm are Brazil and Chile, and in global oil and gas, Qatar. 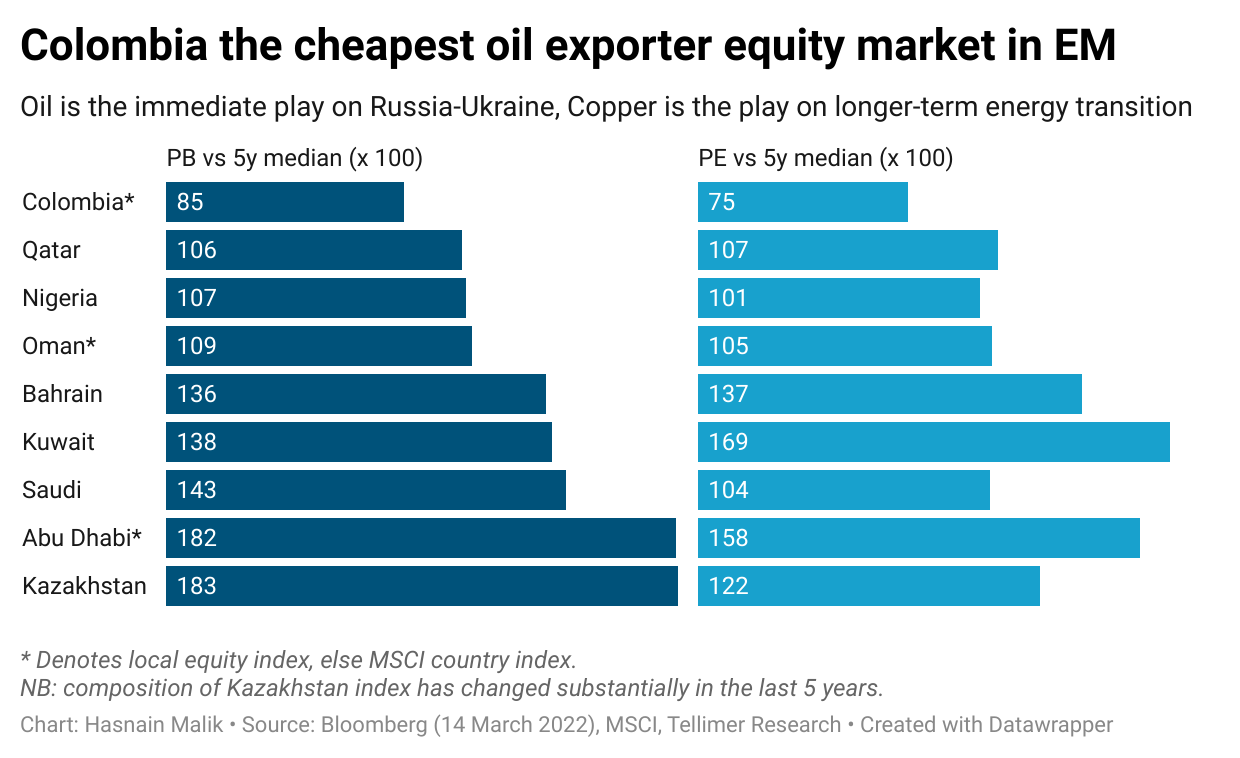