Colombia central bank not done yet as it hikes again

Colombia's central bank, Banco de la Republica, continued its rate hike cycle, with a 100bps increase in its policy rate to 11.0% on 28 October. The move, the 10th increase in this cycle, was expected by the Bloomberg consensus.

It brings the cumulative increase in this tightening cycle, which began 12 months ago, to 925bps, and takes the policy rate to its highest level in 21 years (since July 2001) as the central bank fights inflation at its highest in 23 years (since March 1999).

The hike matches the less-than-expected 100bps increase at its previous meeting in September, which signalled moderation after 150bps increases in its meetings in June and July. Indeed, the policy rate has now nearly doubled since May.

The decision by bank's board of directors was unanimous. It compares to the board's previous decision in September in which six members voted in favour of the decision and one voted for a 50bps increase. This may, therefore, suggest that the bank has turned slightly more cautious. 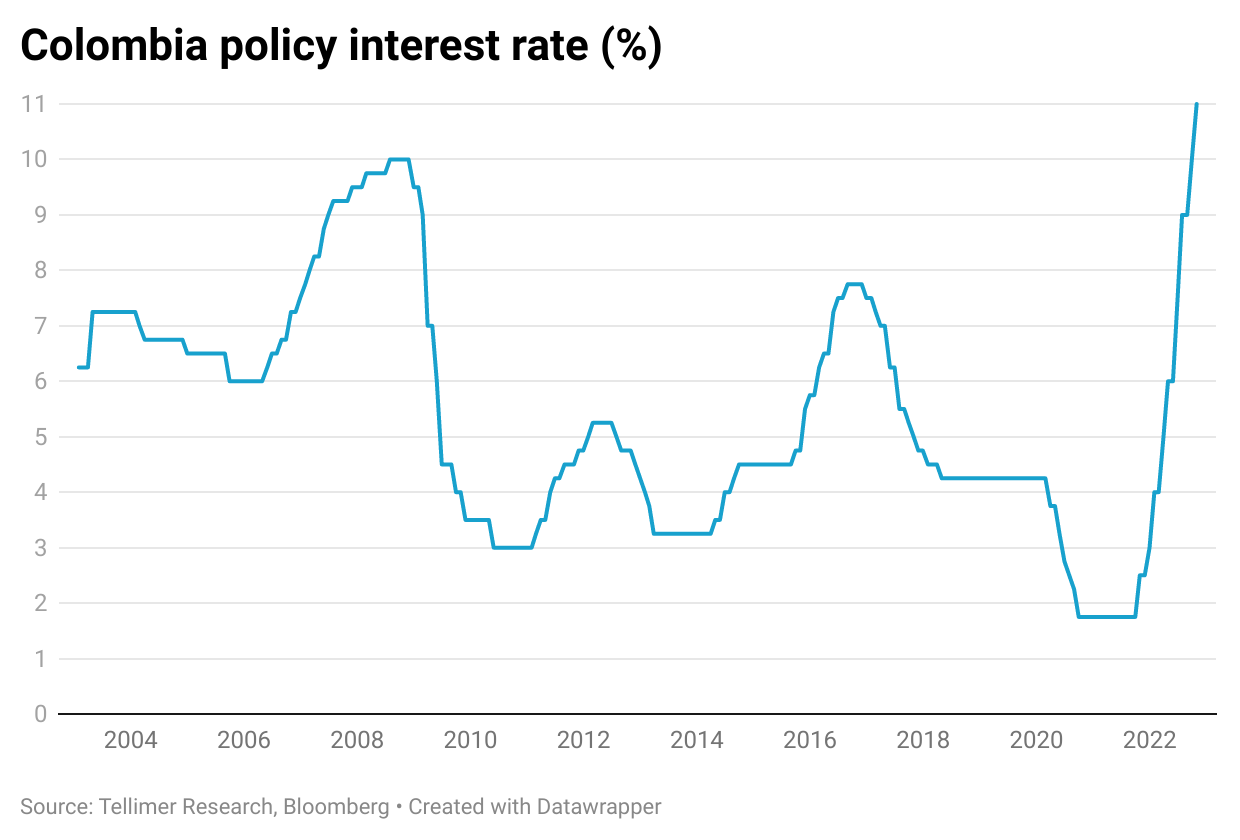 In its short statement, the central bank noted that adverse financial conditions worsened during the month. This led to a higher monthly rate of currency depreciation than that of other emerging economies. We note that the Colombian peso (COP) has fallen by 5% against the US dollar this month – through to 28 October (and at one point was down by 8%) – and is down 22% since May.

CPI inflation rose again to a new high of 11.4% yoy in September, up from 10.8% in August, and well above the 3% inflation target. The increase in inflation was explained by additional pressure in food production costs, higher electricity prices, the exchange rate pass-through to tradable goods, strong demand and indexation processes for rising inflation rates. Core inflation (excluding food and regulated items) also rose, from 6.9% yoy in August to 7.5% in September. 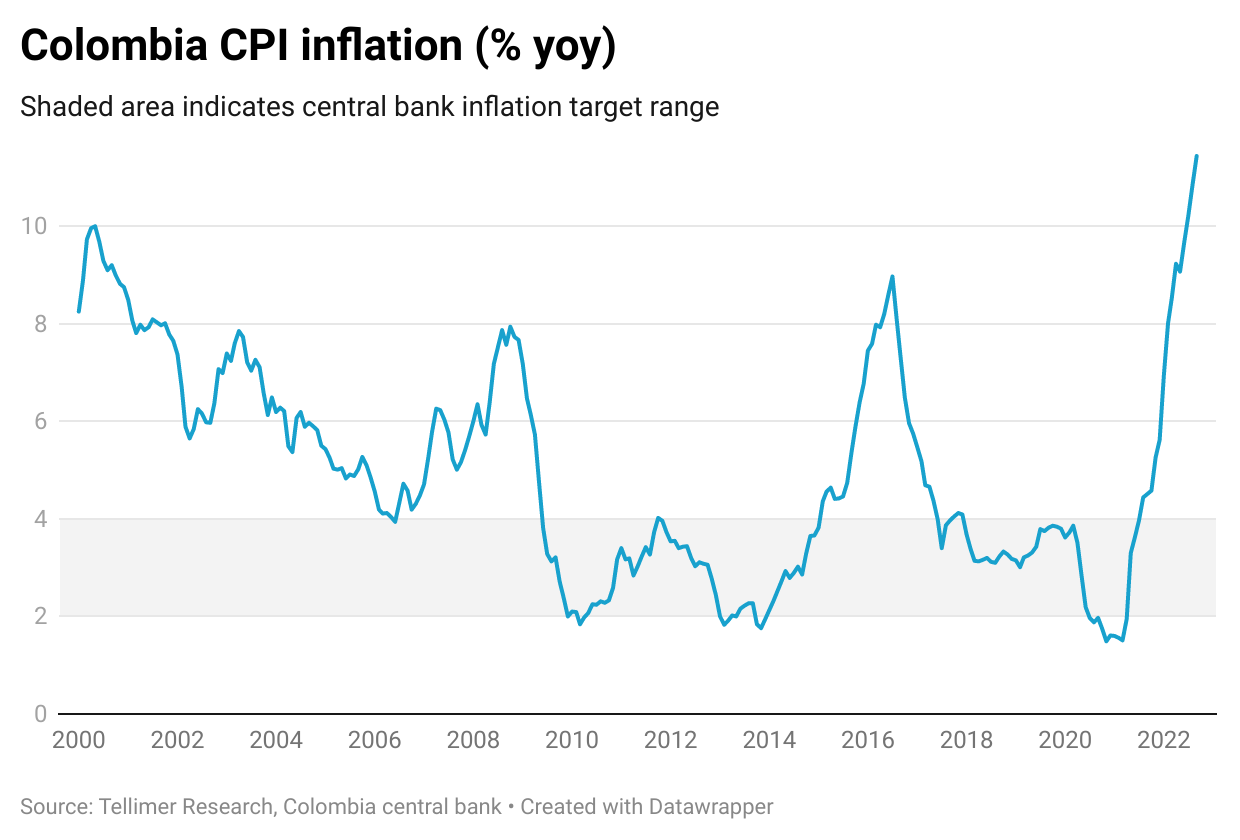 Medium-term inflation expectations have also increased, rising to 6.7% yoy for end-2023, according to the central bank's monthly survey of economic analysts, compared with 6.3% reported in the previous month.

Notably, in our view, the press statement said that inflation expectations were "steering away from the target", a comment reiterated by Villa in his remarks to the media.

The central bank now forecasts real GDP growth of 7.9% this year (little changed from its previous forecast of 7.8%). However, it revised 2023 growth down again from 0.7% to 0.5% due to an expected deceleration.

Investors will look closely at the minutes of the October meeting, due to be published on 1 November, for more clues about forward guidance and the outlook for rates. Investors may be seeking confirmation of the central bank's perceived less hawkish stance in recent months; moderation perhaps, although it is still proceeding cautiously, and we think not yet at the end of its tightening cycle, as some market participants had been hoping.

To that end, we note a change in the wording of the forward guidance contained in the press release which, despite the bank's caution, may suggest it has softened its outlook a touch in our view. It stated that the adjustment process is seen as consistent with the convergence of inflation to its medium-term target of 3% and with sustainable growth; compared with the wording in September of an adjustment process that ensures a return to the 3% target in the medium term. "Convergence" to the inflation target rather than "ensuring" a return to it may suggest the bank is more confident about the outlook for lower inflation, while the addition of growth is perhaps an awareness not to overdo it (as 2023 growth forecasts are revised down towards zero).

However, as we noted last month, the inflation data – added now to the central bank's concern over rising inflation expectations – does not suggest to us that hikes are coming to an end any time soon. However, the slowing in activity that the central bank notes, resulting from the cumulative impact of previous tightening, may help to ease inflation pressure going forward while base effects should help to ease inflation readings next year. In addition, real interest rates are much less – albeit still – negative based on actual inflation, but are positive – and well above the neutral rate – based on one-year ahead inflation expectations.

Although the bank's board will next meet on 25 November, its next rate decision is due on 16 December.